Behlendorf, who has been a leading figure in the open-source software movement for years, explained that the Linux Foundation has put together a series of collaborative software projects to draw attention to specific technologies. In the case of Hyperledger, the project was initiated in December 2015 to raise awareness of distributed ledgers and smart contract systems.

The Hyperledger community currently consists of 15 technology code bases, or projects, the first of which were Hyperledger Fabric and Hyperledger Sawtooth. Behlendorf told Cointelegraph that each are general purpose distributed ledger systems, yet there are deep architectural differences between them. 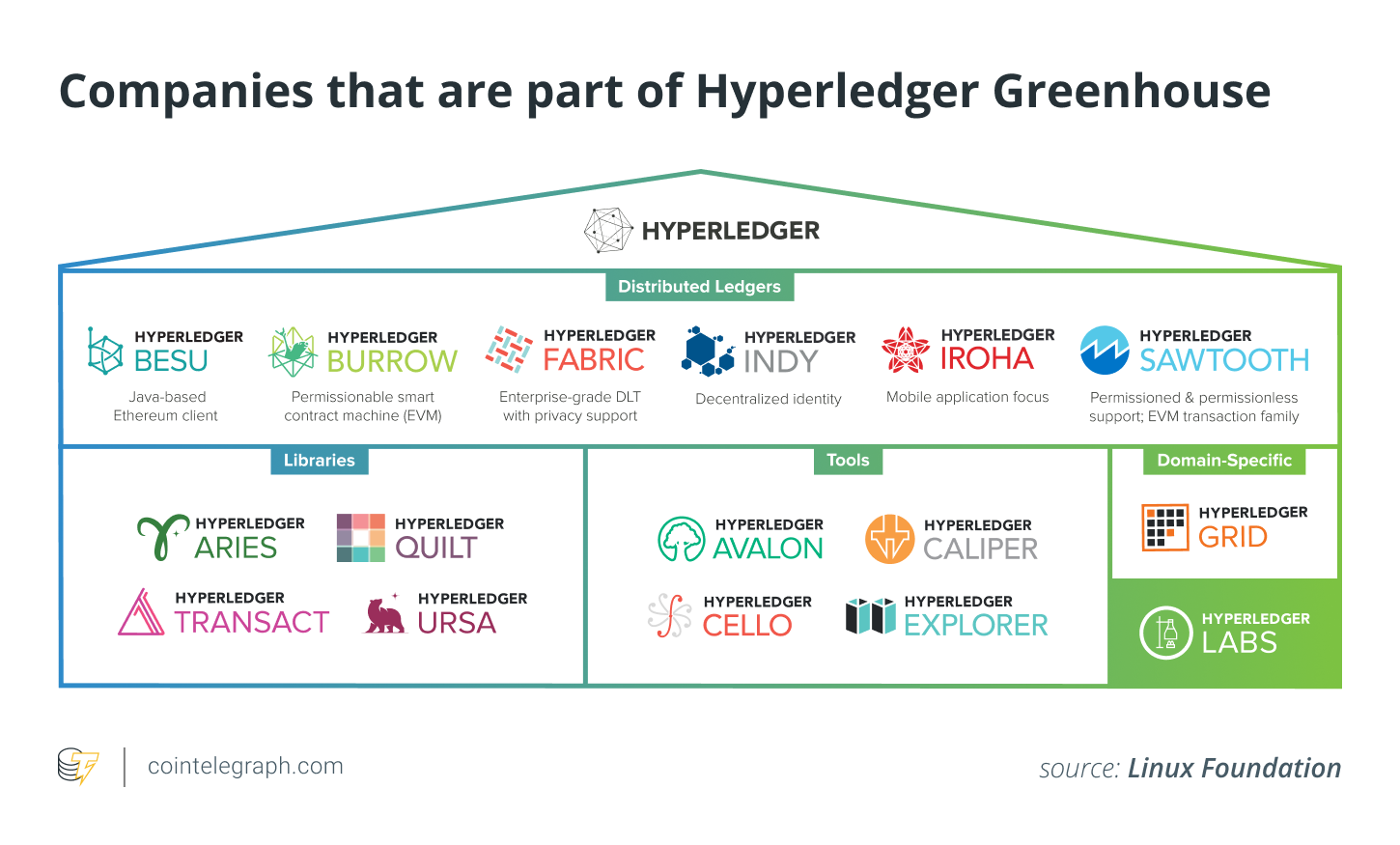 For instance, Hyperledger Fabric is intended as a foundation for developing applications or solutions with a modular architecture. It allows for components such as consensus and membership services to be plug-and-play. Hyperledger Fabric has been adopted by major cloud service providers including Alibaba, Amazon Web Services, Microsoft Azure, Baidu, Google, Huawei, IBM, Oracle, SAP and Tencent.

Blockchain for the aerospace industry

With a market size estimated at over $900 billion in 2019, the global aerospace parts manufacturing market is expected to grow at a rate of 4.1% between 2020 to 2027, with the United States exhibiting the largest market for aircraft parts manufacturing. But unfortunately, achieving trust is one of the greatest challenges for companies operating in the aerospace industry.

Lisa Butters, a general manager at Honeywell, told Cointelegraph that blockchain can help ensure trust within the billion-dollar aerospace industry. Honeywell Aerospace has been providing products and services to leading commercial aircraft across the globe for over a century. In 2019, Honeywell developed a blockchain-based platform called GoDirect Trade, which is powered by Hyperledger Fabric.

According to Butters, GoDirect Trade is an “Amazon-like” online marketplace for used aerospace parts, which is a $4 billion per year industry. The platform leverages blockchain to prove the parts’ origin, while ensuring that each complies with safety standards. Butters said:

“GoDirect trade is similar to Carfax for used cars, except that blockchain rather than word of mouth provides consumers with documented information about part pedigree and previous ownership.”

Butters mentioned that each aviation piece added to the GoDirect Trade platform immediately connects the layers of the supply chain. Everything is combined into a single, shared ledger of transactions, which is meant to transparently track an item's movement. Traditionally, aviation parts are given paper “birth certificates” to document their movements, ownership and more. But paper documents are hard to keep track of and are prone to forgery.

According to Butters, less than 3% of the $4 billion in used aerospace parts sold per year is conducted online due to the notion that aerospace parts are typically tracked and resold using paper documents. This makes the process of selling parts online nearly impossible. Butters added that $7 million in transactions have already taken place on the GoDirect platform:

“The marketplace has only been running for only a year and already caters to the top 100 airlines in the world. Over 70 manufacturing and global repair shops partner with Honeywell.”

Yet while aircraft dismantlers, aerospace repair shops and major airline manufacturers use GoDirect Trade to list and purchase parts, a blockchain-based ecosystem doesn’t always fare well with major airline companies. Butters explained that the problem with building out a blockchain platform like GoDirect Trade is getting enterprises to share data.

To that end, Hyperledger Fabric serves as a private, permissioned blockchain network requiring companies to be given permission to access the platform and view data. Once access is granted, specific organizations can set up a digital storefront on GoDirect Trade. Afterward, trusted companies on the network can load their aerospace parts directly to the platform via an application programming interface and by transferring a text file to Honeywell. According to Butters, GoDirect’s target revenue in sales for this year is $20 million, which she noted will increase to $250 million by 2022:

“We are using blockchain to build trust between our buyers and sellers. We expect to see a growing interest in organizations looking to use our platform.”

American Express’s vice president of technology, Michael Concannon, told Cointelgraph that the company is leveraging blockchain technology for its flexible rewards program. Designed to let merchants create offers using AmEx Membership Rewards points on their own platforms, Concannon explained that the goal of the flexible rewards program is to provide engagement with partners while rewarding card members.

For instance, when customers use their AmEx cards today, they are typically rewarded one point per dollar spent. Those rewards can be put toward gift cards, travel or to cover recent card charges. However, a retailer partnering with AmEx might want to use rewards to target a brand or product, a particular day of the week or a customer profile. Blockchain enables those retailers to leverage rewards in a variety of ways.

Hyperledger Fabric powers the flexible rewards blockchain. According to Concannon, AmEx uses a Hyperledger Fabric network, while merchants run AmEx hosted nodes. Merchants are able to add information to those nodes, which then triggers smart contracts to create rewards points.

Once rewards points are created, AmEx’s node moves those points from its blockchain network into its existing rewards system and backend. This allows card members to consume their points and view them in the traditional manner.

The online wholesale retailer Boxed was the first to partner with AmEx on the flexible rewards program. Boxed conducted a pilot with AmEx in March 2018. Today, its website offers eligible card members nine additional Membership Rewards points per dollar spent on Boxed.com, the Boxed mobile application and on selected products.

In 2019, Rakuten, formerly known as Ebates, partnered with AmEx to offer its customers flexible rewards. The partnership allowed new users of the platform to earn AmEx Membership Rewards points instead of cash back for affiliate link purchases. Rakuten expanded this offer to all of its members in October of last year.

Concannon further noted that Rakuten was the first AmEx partner to use a behavioral-based model to reward customers. He explained that Rakuten users can earn points unrelated to card spend, but rather based on certain behaviors. “If consumers link their accounts to Rakuten they are able to redeem their rewards as Amex Reward Points,” he said.

An additional blockchain-based use case is also currently in the works for AmEx. During Hyperledger Global Forum 2020, Concannon spoke about a system called Vendor Invoicing Validation and Reconciliation, which is a homegrown application that leverages Hyperledger Fabric to enable AmEx contractors and vendors to reconcile their invoices. Concannon explained to Cointelegraph:

“We match the invoice of our purchase orders, the timesheets and approval of those timesheets. All of this is integrated into our backend systems, while other nodes have API and web access to vendor partners.”

The system would allow AmEx to conduct faster payments and reduce cycle time. Moreover, a blockchain network provides visibility to all transactions made from the vendor partner. In addition to AmEx’s flexible rewards program, the company filed for a patent for a blockchain based proof-of-payment system in 2018.

Concannon noted that the patent is currently going through typical examination motions, including back and forth correspondence with the patent office, adding: “I don’t anticipate final disposition on the application for another year or so.”

Blockchain for the gemstone industry

Klemens Link, the head of development at Gubelin Gem Lab — a gemmological laboratory that determines the authenticity of the stones used in Gubelin’s jewellery — mentioned the potential blockchain can bring to the billion-dollar gem industry. Link told Cointelegraph that the gemstone market still relies on paper records to trace the origins of stones:

“The industry has traditionally relied on paper records which leaves gemstones vulnerable to value manipulation, fraud, theft and other unethical practices.”

To combat the challenges associated with tracing gemstones, Gubelin Gem Lab has partnered with blockchain company Everledger to launch its Provenance Proof Blockchain.

Link explained that Gubelin Gem Lab’s Provenance Proof Blockchain is an open platform powered by Hyperledger Fabric that can be used by any industry player free of charge. “The vision was to create a digital log book for each and every gemstone telling the story from the mine all the way to the market,” he explained.

Gubelin Gem Lab has created the Emerald Paternity Test, which leverages the Provenance Proof Blockchain. The Emerald Paternity Test uses DNA-based tiny particles encoded with a mine’s information to tackle the issue of determining a stone’s origin. These particles are applied on a gemstone at its source to enable the full traceability of a stone’s birthplace throughout its lifetime.

Data from the gemstone is recorded every step of the way on the Provenance Proof Blockchain network, which is transparent and immutable. A smartphone with internet access is required for the processes associated with the Emerald Paternity Test.

Currently, the Provenance Proof Blockchain is being leveraged by Moyo Gemstones, an ethical gemstone collaboration from Tanzania that has a strong relationship with the Tanzanian Women Miners Association, referred to as TAWOMA. By allowing the gemstones mined by TAWOMA to be securely traced from source to market, transparency is increased throughout the supply chain, empowering the female miners to work safely, mine better and improve financial security.

Link further explained that gemstone purchasers can now understand that the gem they’re purchasing hasn’t been a product of bad practices, such as unethical mining, fraud or value manipulation, increasing the value of a gemstone.

Yet, there are still challenges that must be overcome. For instance, Link explained that it’s been difficult to cater to the needs of small players located in remote areas with limited internet access. Another challenge is related to privacy, as Link noted that finding the balance between providing transparency for consumers and respecting privacy for stakeholders has been tough: “We don’t want to risk anybody’s security through exposing private data.” Link noted that 200 companies are currently using the Provenance Proof Blockchain, adding:

“When we started this project roughly two years ago intermediate stakeholders were arguing with us, claiming that we’ll destroy their businesses by changing the industry to be more transparent. Now, we’re positively surprised by the high number of stakeholders who either ask us where they can find Provenance Proof traceable gemstones or who want to join the initiative.”

Due to its open-source nature, Behlendorf told Cointelgraph that he is unable to provide an exact number of the businesses leveraging Hyperledger Fabric. However, while Honeywell, American Express and Everledger rely on Hyperledger Fabric to bring trust to traditionally nontransparent industries, there are a handful of other major companies doing the same.

For instance, Hyperledger Fabric is being used by Voatz to bring transparency to national voting systems. It is also being applied to ensure trusted and reliable COVID-19 data is generated for health officials.

Related: Blockchain Voting Systems Could Be the Future, but Current Flaws Persist

Behlendorf further explained that when he joined Hyperledger as its executive director in 2016, he asked the community if Hyperledger should focus on one particular solution or serve as a core backbone that could cater to multiple architectures. He said:

“Nobody really felt like they could decide at the beginning which one of the architectures was going to be the one to hang everything off of. However, we knew all these projects had to focus on blockchain technology and they all had to compliment each other in some ways by bringing trust and transparency to a number of industries.”