Nitrogensports is the web's largest Bitcoin powered sportsbook. They are adding Poker and have a free tournament coming, we have the details and a full interview inside. 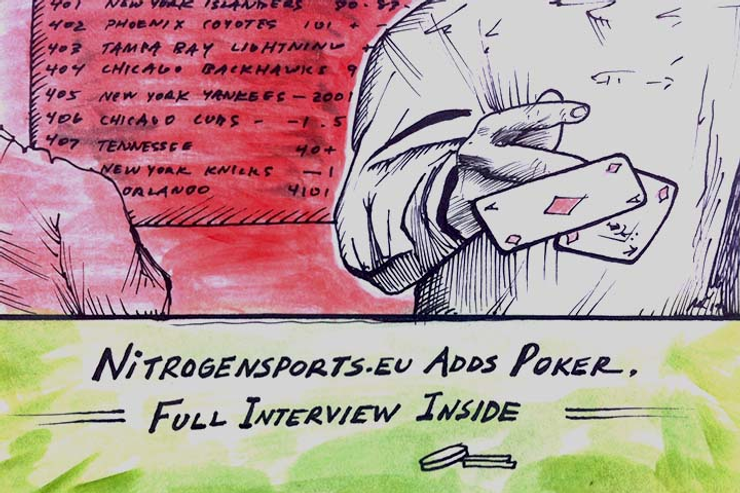 Gambling was one of the first obvious use cases of Bitcoin. It sits in a gray legality zone in a lot of jurisdictions, so there are obvious reasons for wanting to circumvent the traditional financial avenues and personal identity revealing credit card transactions.

There are tons of Bitcoin chance gambling sites out there, but surprisingly few sportbooks. Nitrogensports.eu is one of the few out there that not only covers a wide variety of sports but has various prop bets for each of them.

Today, they have announced that they are bringing poker to the site.  The first step to bringing all of users gambling desires under one virtual roof. It is a strategy that has paid off for Vegas casinos: give sports junkies something to do while they wait for their next game to start without leaving your casino.

It is a lot easier to move from Nitrogensports to SatoshiDice and back again than it is to jump between Ceasars Palace and The Flamingo but the theory is the same: Give people everything they need, and they won't go anywhere else.

They are kicking off their Poker events with a free 5BTC tournament starting Saturday 10pm GMT. But, starting today at 10pm GMT Poker will become a mainstay at the site.

James Hampelton, one of the cofounders of Nitrogensports took some time to answer our questions and tell us a little bit about running a Bitcoin powered sports book and what is next for the company.

Cointelegraph: You moved from a social gambling site to one of the largest Bitcoin sportsbook on the web. What do think the future of gambling online looks like? Do you foresee a future where the majority of betting online uses Bitcoin?

James Hampelton: While its true that we pivoted from a social-based website to an anonymous one, we still believe the fun and social aspect has a place. We've started reaching back to our roots with leaderboards and contests, but are still maintaining our users' privacy with the new design. The market for online gambling is huge and Bitcoin is only but a very small fraction of that market; we think it will still be a very long time before a true majority of betting is done with Bitcoin.

CT: How about physical casinos, I know it is a little out of your wheelhouse, but do you think Bitcoin has a future in places like Las Vegas?

JH: Bitcoin may very well be accepted in the brick and mortar world, but perhaps only to be exchanged for casino chips (for whatever currency the casino chips use).

CT: With the NFL Season just getting underway, the season long bets have obviously closed, but do you have anything special bets planned for the season, any special plans for the second half of the season?

JH: We're always running our monthly "Go for Gold" promotion, and will continue to offer a variety of challenges to complete. In addition, we do have some top secret unique contests as the season goes on, some of which will be centered around accomplishing certain achievements in a similar way.

CT: Bitcoin has swung wildly in price, including several massive spikes. Do you have any interesting stories about someone making a relatively small season long bet that turned into an extremely high value bet by the time it was due? (Maybe someone betting on the NFL season last year when bitcoin was relatively low, and having the bet come due in January or February when Bitcoin was near its highest)

JH: There were definitely some small fluctuations like that, but nothing that's stood out as story-worthy.

CT: As mentioned, you are now adding Poker to your site. Care to tell us a little bit about what the experience will be like on Nitrogen Sports?

JH: Well, for launch we'll have a web-based version of the software so there's nothing to download. That will lend itself well to playing on mobile and tablet devices alike. The user experience has always been at the top of the list for us, so expect some nice visuals as well. We'll be launching with a rewards program, which will allow players to earn Bitcoin while playing and also earn free bets in the sports book.

CT: Users now have something meaningful to play while they wait for their sport bets to play out, just like in Vegas. Do you have any plans to add other casino-like games, until the site covers nearly everything?

JH: Yes, we're consistently looking to add to our brand and casino-like games are on the roadmap. I think you'll start to see the first ones come out Q4 of 2014.

JH: We know that our bettors love the social contests, and one of our biggest is the Go for Gold - I expect you'll see the inclusion of College Football in some of these challenges. Right now, our focus is on the launch of Poker, but definitely check out our Parlay Jackpot, Go for Gold challenges, and the free bet contests that are always running on our subreddit

CT: DiceBitco.in recently ran into a controversy where someone was changing the instances. While the owner maintains his innocence, the community is highly skeptical. What kind of measures will you be taking to allow users to verify the games are fair to all involved?

JH: When it comes to casino games, being provably fair is very important to us. We'll have a very easy way for players to influence the randomness of our games, and a some fully-transparent steps players can take to verify that the results are legitimate themselves.

CT: Bitcoin regulation is big news right now, with the BitLicense looming over New York and Bitcoin companies around the nation trying to figure out how to deal with it. What can you tell us about Nitrogensports' plans for dealing with regulation?

JH: Bitcoin is definitely revolutionary, and it's interesting to follow the various interpretations of its definition. How it's handled is going to vary in every single jurisdiction. As we've always done, we'll continue to comply and follow any regulations that apply to our business.

CT: How do you guys set your lines? Are they based directly on Vegas lines? Do they move with how your users are betting, or do you pay more attention to the outside betting world?

JH: They are based on the general market consensus initially, and can then move outside of this range depending on the action we receive on a particular side.

CT: Thank you for your time, is there anything else you would like to let our readers know?

JH: We're always listening to our users! If there's something you want, just let our team know. A lot of what you see today comes from the feedback we've received. We thank you all for your support and will continue to offer you the best support and user experience we can!

Related News
XRP, Libra and Visa to Fight It Out for Cross-Border Remittance Crown
Startup Brings Crypto Payment Option to Over 730 Locations Worldwide
<div is="sidebar" :sidebar-data="{"promoButtonsI18n":{"crypto-button":{"url":"crypto.btn.sidebar.url","label":"Get Crypto At True Cost\n","text":"Cryptoassets are complex instruments and investments carry a high risk of losing value. You should educate yourself in how crypto-markets work before making any investments. Always invest responsibly and be prepared for the risks associated with investing in or using cryptoassets. This promotion cannot be considered investment advice."},"etoro-button":{"url":"https:\/\/ad.doubleclick.net\/ddm\/clk\/437480595;240556498;x","label":"Try Etoro","text":"Trade on the world’s leading social trading platform (Highly volatile investment product. Your capital is at risk)"},"hitbtc-button":{"url":"https:\/\/hitbtc.com\/?ref_id=5cba0be404aa3","label":"BEST LIQUIDITY ON HITBTC","text":"Note that all trading strategies are to be used at your own risk. Before trading, we recommend to make sure that you have a clear understanding of cryptocurrencies and how they are traded."},"changelly-button":{"url":"https:\/\/changelly.com?utm_source=cointelegraph&utm_medium=referral&utm_campaign=changellyctengbutton&ref_id=le9ssi8dgmskmqu0","label":"BEST RAT