Bitcoin-friendly US congressman Jared Polis has warned the Bitcoin community of a possible "push back" from regulators in the future. 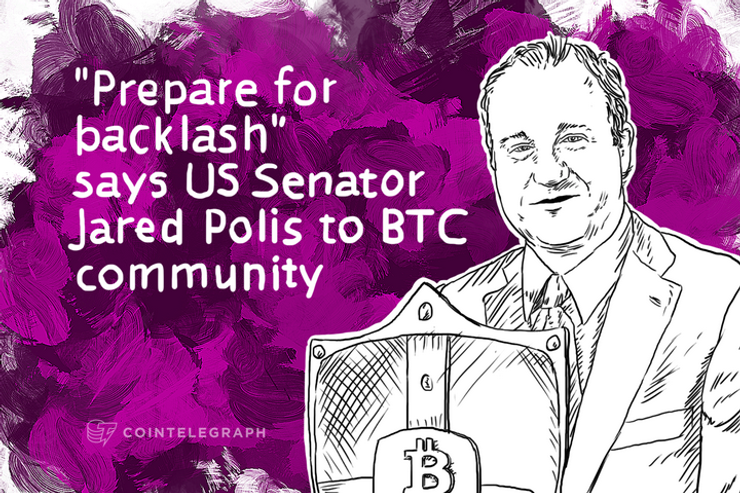 Jared Polis (D-Colorado) is no stranger to cryptocurrencies and is one of the few proponents of Bitcoin on Capitol Hill where he organized a Robocoin ATM demonstration back in April where he purchased $10 worth of BTC in front of his peers and members of the media. He was also responsible for spearheading the initiative to get Bitcoin approved by the US Federal Elections Commission (FEC) for campaign contributions.

In a recent interview with CoinDesk, Polis announced that he would "be happy to rally support [in Congress] to restrict the funding" of any governmental agency trying to restrict Bitcoin usage and vowed to “defend Bitcoin in Congress” if reelected for a fourth term representing Boulder and north central Colorado.

Hot off the recent FEC ruling, Polis has positioned himself as a de facto Bitcoin representative in Congress although he has only received US$ 2,000 in cryptocurrency donations so far. And, admittedly, it remains to be seen just how much influence Polis has since he’s currently not on any committees overseeing fund appropriations or commerce and is in the House’s minority party. So it is not surprising that the tenured Mr. Polis gave a realist’s outlook on Bitcoin:

"We haven't seen the full backlash yet, in part, because Bitcoins aren't fully mainstream. But, as they become more and more mainstream, inevitably, they are in some ways usurping the prerogative of nation states, and I fully expect to see more pushback from countries including [the US]."

To “defend” cryptocurrencies, Polis must contend with legislators whose views on Bitcoin are on the opposite side of the spectrum such as Senator Joe Manchin (D-West Virginia) who stated back in February in a letter to Federal Reserve Chairman Janet Yellin:

"I am most concerned that as Bitcoin is inevitably banned in other countries, Americans will be left holding the bag on a valueless currency."

Certainly, Mr. Polis will be fighting an uphill battle against the majority of his peers who are not yet convinced that Bitcoin is useful for anything else besides purchasing illegal drugs or laundering money. And even though both of the aforementioned Democrats have polar opposite views on Bitcoin’s potential, they both anticipate a clampdown on Bitcoin due to its disruptive potential for incumbent financial systems and the ability to “usurp the prerogative of nation states,” as Polis puts it.

But while many argue whether Bitcoin can be regulated at all, it wouldn’t surprise a lot of people if lawmakers across the world attempt to rein in the Bitcoin economy by enacting laws that would lower anonymity for users and subsequently tracking all cryptocurrency transactions through the ledger.

Nevertheless, the cryptocurrency community has already weathered many a storm such as Mt. Gox and daily rumors of a looming crackdown. Therefore, it must continue to adapt to the ever-changing political sentiment across the globe while striking a fine balance between the decentralized spirit of cryptocurrencies such as Bitcoin and the push towards mainstream adoption and state recognition.