The Fortnite community on Reddit conducts five times as many token transfers as r/CryptoCurrency in the new community points system.

Reddit’s r/FortNiteBR community has conducted almost five times as many ERC-20 token transfers as the r/CryptoCurrency community with over 1% of Fortnite subscribers holding tokens.

After only two weeks of Reddit launching their Ethereum-based Community Points system, over 15,000 users have performed almost 18,000 token transfers with over 80% using FortNite’s Brick tokens as shown by DappRadar’s Reddit Points Tracker. 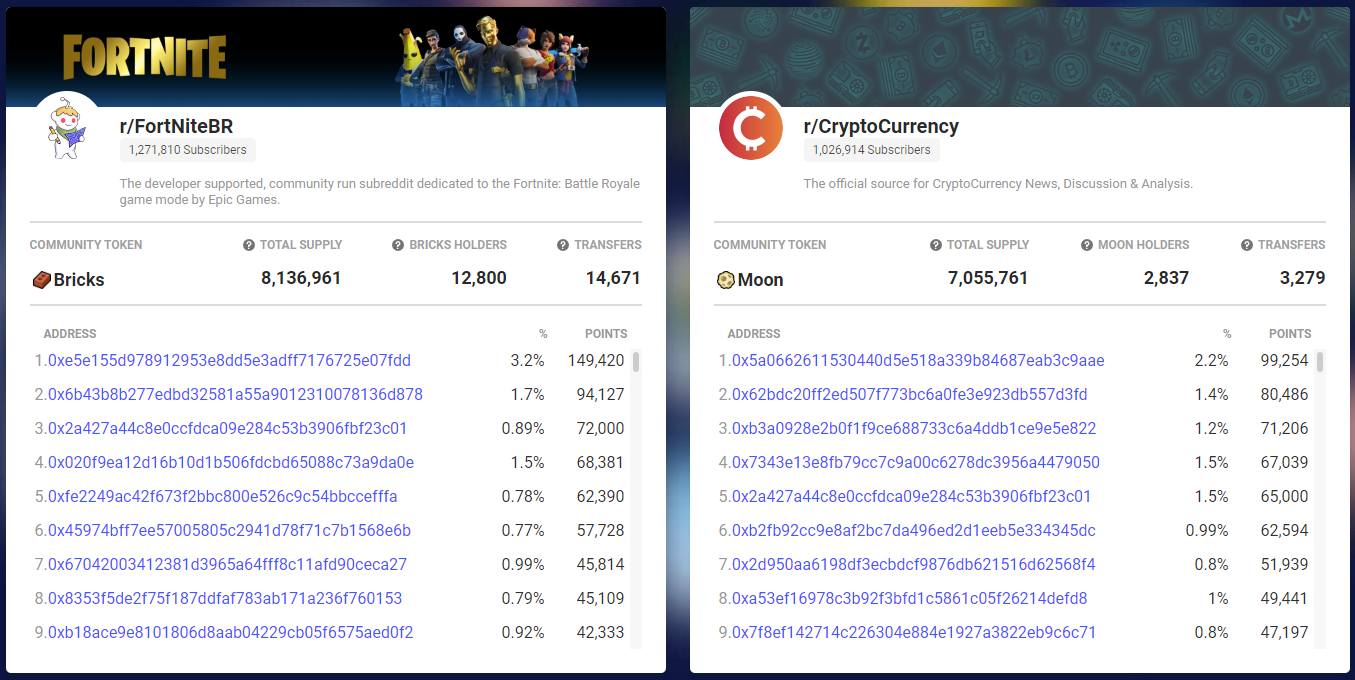 Both communities have a similar amount of subscribers with r/FortNiteBR only slightly ahead on 1,271,810 subs, but within three days Fortnite showed much stronger support as over 75% of token sign ups came from their community.

Reflection of the community’s health

The disparate numbers between each communities’ adoption could reflect on their overall health. Popular FortNite posts can receive over 4 thousands up votes, up to 20x that of popular r/CryptoCurrency posts.

“A stunning example of the state of crypto on Reddit. The communities dedicated to Bitcoin and Blockchain are being disincentived by their mods from using tokens. These same mods tow the line of censored /r/Bitcoin...  @reddit. You've got a serious problem.”

Two days ago, a reddit user took to twitter referencing the MOON community tokens after their podcast was removed from the r/CryptoCurrency and asked to post in r/cryptocurrencymemes.

Twitter user @etherchain_org saw the comparison as a positive sign calling for a community token to be added to the r/Bitcoin community which has 1.44 million subscribers.

Can we finally add a community token to r/Bitcoin as well?😝 #bitcoinhttps://t.co/OsYnEVjmMm pic.twitter.com/y0CuPN62RL

Are there bigger plans?

The system is currently only available to the r/FortNiteBR and r/CryptoCurrency, but will eventually become available to Reddit’s entire 450 million user base. Backer of the community points system Tencent has over 800 million monthly users, and there is speculation this could connect over 1 billion new users with cryptocurrencies should this test prove successful.