Jad Mubaslat is a senior student in biomedical engineering and avid entrepreneur based in Colombus, Ohio. He founded BitQuick, an over-the-counter (OTC) Bitcoin trading platform in February 2013. 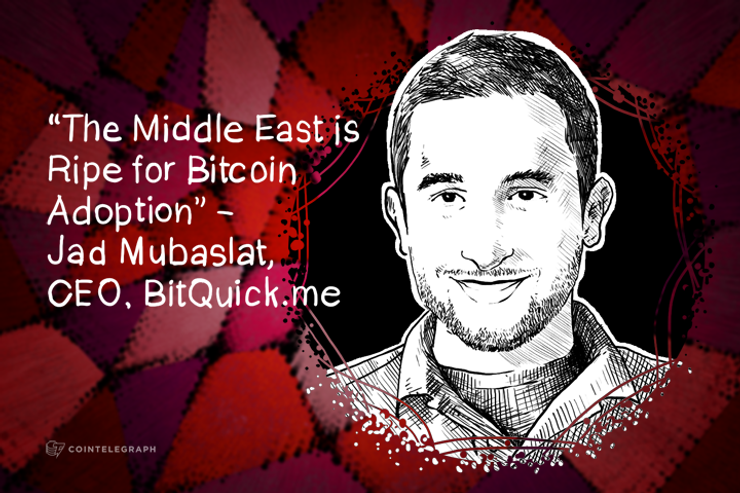 This week, BitQuick announced the launch of its trading platform BitQuick.me in the Middle East. While there haven’t been more details on the topic, we reached out to its founder and CEO Jad Mubaslat, for enlightenment.

Jad Mubaslat is a senior student in biomedical engineering and avid entrepreneur based in Colombus, Ohio. He founded BitQuick, an over-the-counter (OTC) Bitcoin trading platform in February 2013, and hasn't stopped working on the startup since. Today, BitQuick offers its services to customers across the world including North America, Europe, Asia, and most recently, the Middle East.

In his interview, Mubaslat shares his insights and expertise on various topics including Bitcoin's future in the Middle East, the political landscape in the region, as well as his ambition in making BitQuick an international thing.

Cointelegraph: Since BitQuick US/EU's launch in July 2013, you have expanded rapidly: Taiwan in October, India in December, and more recently, Middle East. There is also AltQuick for altcoins. Does your expansion reflect BitQuick's demand growth, or does it conceal a long-term strategy?

Jad Mubaslat: BitQuick US/EU has attained over 5,400 customers since launching in August, 2013 and has a daily volume of around 20 BTC. Taiwan has also seen strong traction, attaining over 440 customers. India and AltQuick have had relatively low volume as of late, roughly 0.5 BTC daily. We are trying to position ourselves to have a strong international presence when Bitcoin adoption picks up in the emerging markets.

As for AltQuick, cryptocurrency is still a developing technology and we want to make sure that users have the capability to transact in whatever cryptocurrency they like. While Bitcoin is certainly #1 now, we like to keep the platform somewhat currency agnostic.

CT: Why Taiwan, India and the Middle East? How do you pick your hosted countries?

JM: Taiwan came naturally. Ari Pole was stationed out in Taiwan but was also a user of the BitQuick US platform. He was interested in running a BitQuick of his own so I went with it and that’s what really got the BitQuick team thinking about other international territories.

A huge consideration when looking at new territories is their remittances markets. India and the Middle East have strong remittance markets between them. By creating a presence in these regions, once there is high liquidity, developing a simple remittance network on top of the platform will allow individuals to save money when sending money around the globe.

CT: So far, which of your local exchanges have been the most successful? How would you explain this success?

JM: Certainly our US exchange. We have around 20 customers per day, and transact 20 BTC per day. I think the reason is simple why we’ve achieved organic growth. We’re a bootstrapped operation, so we don’t have much to spend on marketing. Thus, the product has to be great, and I believe our reviews speak for themselves.

At its heart, our platform is simple, safe and secure for new and experienced Bitcoin users alike. If you’re trying to sell Bitcoin, there is never a fee and you can put your own price. If you’re buying, there is only a 2% fee and you know you’ll get your coins within 3 hours or less. We’re trying to remove the confusion and danger when using platforms like LocalBitcoins.

CT: In the Middle East, many central banks issued warnings against Bitcoin and cryptocurrencies. Jordanian authorities even prohibited financial institutions from "dealing with virtual currencies.” How do these governments position themselves on the topic of digital currencies, generally speaking; and what is the common "trend"?

JM: Most governments are taking the wait and see approach and it’s no surprise. The prohibition of financial institutions from dabbling in cryptocurrencies is consistent with this approach. They don’t want the financial institutions gambling with something with such high risk. This is perfect for peer-to-peer platforms like BitQuick though.

Essentially trading amongst the people is encouraged at this stage. In the Middle East, things are moving especially slow and that seems to be from the very low Bitcoin penetration that the region has seen. There’s no motivation for the governments to push out regulation faster than they need to, as it risks making mistakes.

CT: Which of these countries is the most reluctant to digital currencies?

JM: None of the territories we are servicing have been outright hostile toward Bitcoin thankfully, and many have been extremely progressive (United States, Taiwan, Europe, Lebanon).

CT: On the other hand, places like Dubai and Tel Aviv are emerging as local Bitcoin hubs. Even Iran made a rather optimist announcement regarding Bitcoin. Why are Middle East countries' opinions on the matter so disparate?

JM: While you saw a cautionary stance taken by the Central Bank of Jordan, I don’t believe it was too inconsistent with surrounding regions. I think the simple answer as to why some countries are being more progressive than others is because they understand the concept.

As soon as a country understands the fact that embracing Bitcoin will create more jobs and economic activity in their region, encouraging adoption is a no brainer. Dubai and Tel Aviv in particular have seen growing startup scenes, and with that come tech savvy individuals.

CT: There have been rumors of the Sunni jihadist group ISIS planning to use Bitcoin to fund operations. Do you think there is any merit to these claims and do you think it is possible for such an organization to use Bitcoin considering the transparent ledger?

JM: Not at all. Laundering huge amounts of money through the Bitcoin network, especially at this point, would be inefficient and dangerous for ISIS. ISIS recently stole half a billion dollars. Just looking at that figure alone, and comparing it to Bitcoin’s market cap of $US6.6 billion, shows how impossible it would be to use the Bitcoin network for mass terrorism financing.

This doesn’t even take into consideration the technical aptitude it would take for ISIS to be able to use and discreetly launder their Bitcoin on the blockchain and there also has to be enough Bitcoin services willing to sell Bitcoins to ISIS. Legitimate Bitcoin businesses have strong AML policies developed, including BitQuick, that make laundering funds impossible on a mass scale.

CT: Has the constant turmoil in the region affected business development, especially Bitcoin?

JM: Absolutely, but that is where the opportunity is. Investors are hesitant to deal with the region, but the facts are that infrastructure is growing very quickly in the Middle East, especially the Gulf States. Jordan is particularly interesting in that the turmoil in their surrounding regions has created somewhat of an economi