Vertcoin has climbed to almost 20 cents per unit or 200% in 24 hours, the latest asset to surge on SegWit activation hype.

Vertcoin (VTC) has become the latest cryptocurrency to benefit from a large altcoin price surge due to Segregated Witness (SegWit) implementation.

At press time, the proportion of miners signaling support for the soft fork stands at just under 73 percent - just below the 75 percent activation threshold. 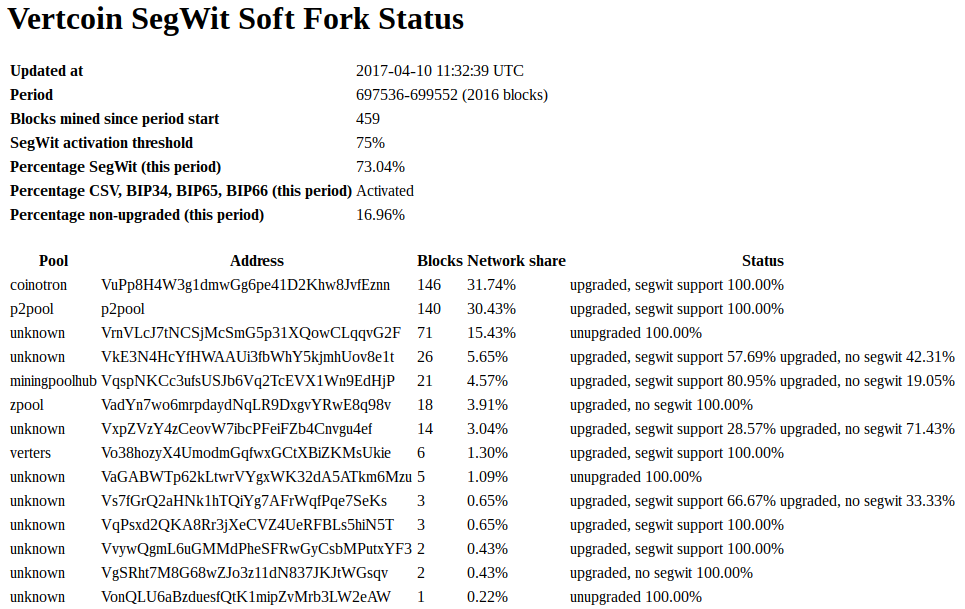 “The Segregated Witness soft fork is well under way, we are currently signaling just over the threshold of 75 percent for CSV and over 50 percent for SegWit itself,” staff wrote in Vertcoin’s latest blog post March 23, encouraging a final miner push to increase support.

Vertcoin describes itself as “Bitcoin upgraded,” providing a network with “special attention to privacy and permanent decentralization” which is resistant to mining centralization through the use of ASIC hardware.

Having remained fairly constant in price throughout 2016, as of Monday, one VTC had shot up 191 percent in 24 hours to sit at 19 cents.

The behavior follows that of the top-ten altcoin Litecoin, which is currently trading at around double the established rates on the back of imminent activation of SegWit.

Not everyone is convinced, however, with Twitter commentators suspecting SegWit is merely the latest tool for developers to use in order to gain from a temporary price pump.

Apparently the latest tactic by altcoins to get a pump is to activate #Segwit. Pumpers have realised Segwit makes prices go up.