Bitcoin’s new monthly candle has been met with a fierce sell-off. Traders explain bearish and bullish scenarios for BTC.

28710 Total views
54 Total shares
Listen to article
0:00
Analysis
Own this piece of history

On Sept. 1, a new Bitcoin monthly candle opened with significant optimism. The August monthly candle closed above $11,500 for the first time since the all-time high in 2017. But in the short term, traders are leaning cautious following a sudden sell-off in the cryptocurrency market.

In the last 24 hours, the price of Bitcoin (BTC) declined by more than 6%, while Ether (ETH) price dropped by 10%. The sentiment around the short-term trend in the cryptocurrency market remains mixed after the rejection.

Some traders expect the price of Bitcoin to drop to as low as the $11,000 support area. A drop below $10,500 and a consolidation under it would raise the chances of a bearish trend. Traders generally consider $11,000 and $11,700 as the key levels for BTC. Technically, if Bitcoin remains below $11,000 for a prolonged period, it might indicate a bearish pullback. If BTC remains stable above $11,700, traders say it raises the chances of a rally. 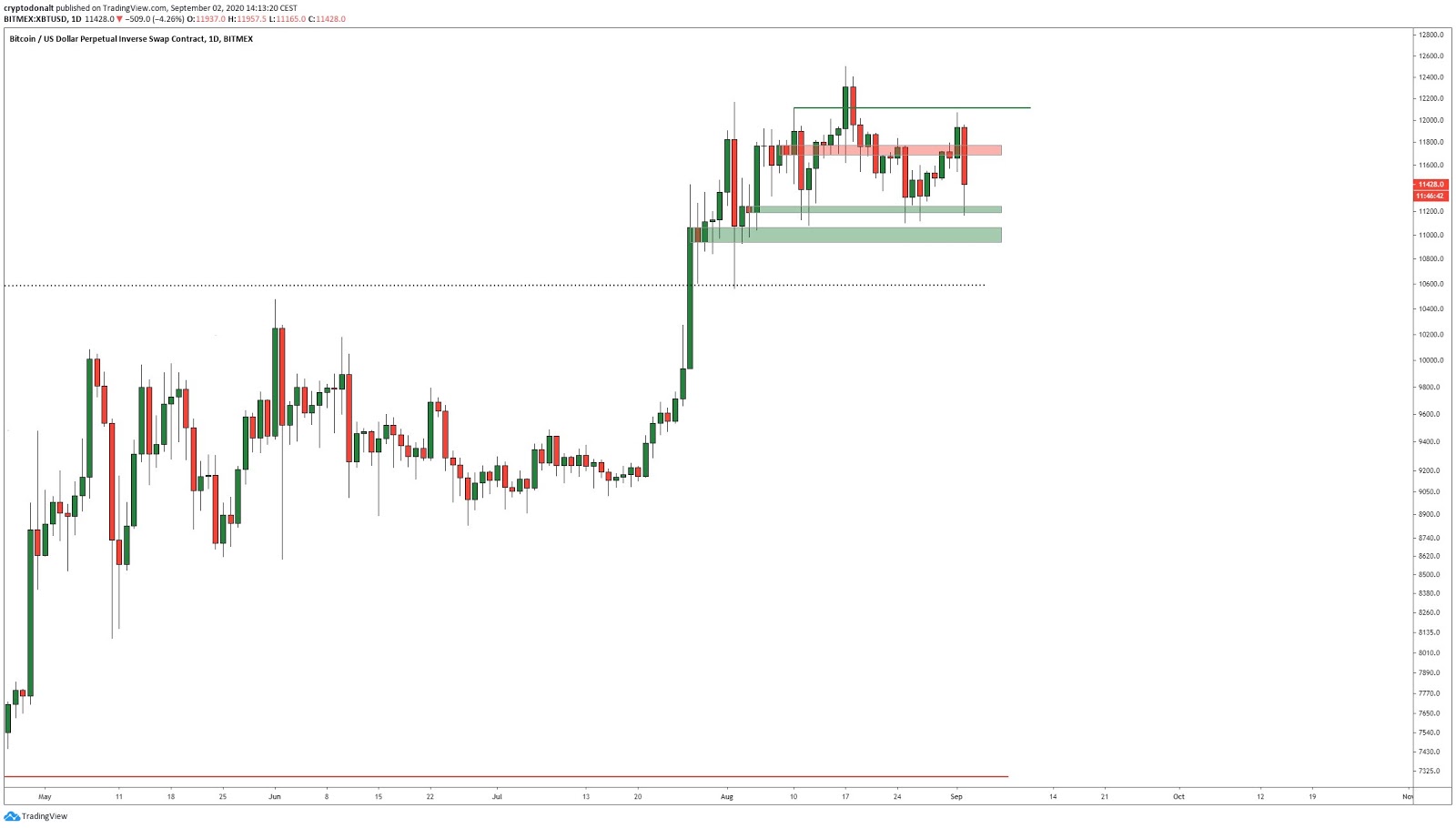 DonAlt, a pseudonymous Bitcoin trader, said the trend of BTC remains uncertain, as for either direction to confirm, BTC would first have to close above $11,700 or below $11,000 in order to reveal clear bearish and bullish scenarios:

“Nothing lost for the bulls yet, close above $11770 and I’d expect mega moon. Close significantly below and sells into the $11700 area become very attractive. Lose $11k and it’s macro pullback time, as long as it holds assume we’re gonna go further up.”

The bearish scenario for Bitcoin in the near term

There are three factors that could cause a decline in the price of Bitcoin throughout September. First, the U.S. dollar has started to recover at a key support level. Second, the month of September has historically been a slow month for BTC. Third, a consolidation after a major rally is typical of BTC.

Prior to the rapid price decline of Bitcoin on Sept. 2, long-time bulls predicted a sharp pullback. In the past five days, the price of Bitcoin rose by nearly 8% against the U.S. dollar, while Ether, for example, saw an even sharper rally, surging 30%.

The primary bearish scenario for Bitcoin is a continuous fall to $11,000, a rejection of the support level, and a drop to the $9,700 CME gap. For that to occur, BTC would first have to breach below the $11,000 support area, which has served as a strong foundation for the recent rally.

A crypto trader known as “SalsaTekila” said they see around $10,500 as the key support for the continuation of a bullish trend. Considering that many traders perceive $10,500 to $11,000 as an important support range, losing the support range could trigger a deep pullback.

The main bullish case for BTC

An abundance of potential catalysts could also buoy the momentum of Bitcoin. In recent months, many on-chain indicators have signaled a positive trend for BTC in the medium term. Metrics such as HODLing activity, net unrealized profit/loss, declining exchange reserves and growing institutional demand support the bullish case of BTC in the longer term.

The bullish case for Bitcoin in the short to medium term is a continuous increase toward an all-time high. Historically, BTC has been stagnant from September to October. Every single monthly candle for the month of September since 2017 has closed as a red candle.

For instance, throughout 2017, the price of Bitcoin continued to increase to $20,000. Bitcoin’s monthly candle in September 2017 closed as red, but the bullish trend continued nonetheless in the fourth quarter of the year. Hence, even if this year’s September monthly candle closes as a red candle, there is a strong possibility that the uptrend will resume. 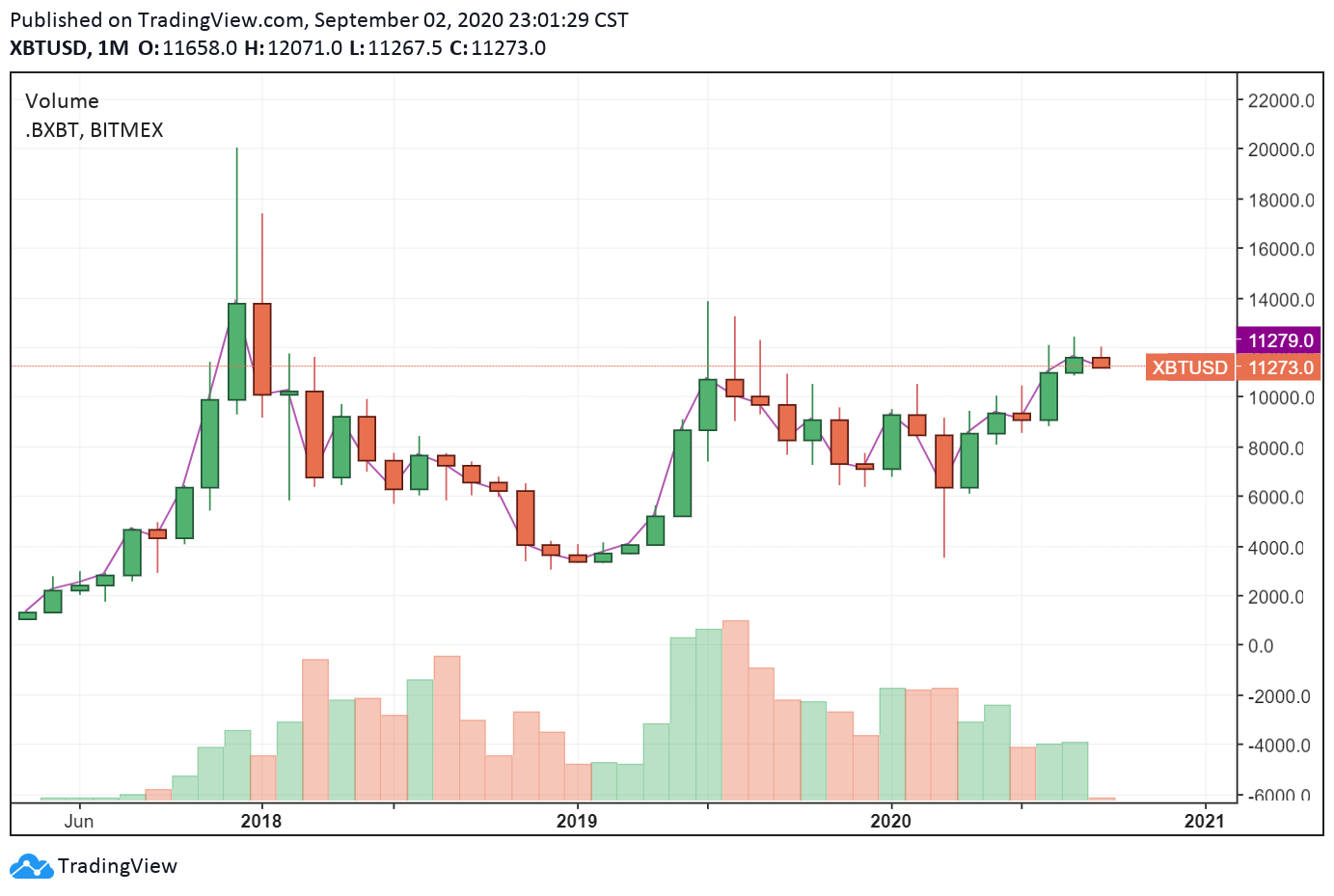 The trader known as the “Byzantine General” said that the bullish trend of the market is intact. Both Bitcoin and Ether portrayed signs of an overextended rally prior to the pullback. As long as BTC does not break below the $10,500–$11,000 support area, the bullish market structure remains strong. The trader said:

“This is how bull markets work. No once can get to a consensus. You got people on both sides of the trade. When seemingly EVERYONE agrees that the market is bullish, THAT’s when it usually tops out. We don’t have that right now.”

Despite the short-term correction of Bitcoin, researchers at market analysis firm Glassnode said not many long-term investors sold as BTC dropped below $11,200. The data indicates that it could have been a temporary pullback to flush overleveraged longs in the futures market. The cascade of long contracts possibly caused a rapid price drop.

Coin Days Destroyed (CDD) is an indicator for movements of large & old stashes of $BTC.

Currently, it is showing no signs of long-term investors cashing out.

In fact, CDD is less than half compared to last year when #Bitcoin was at the same price level.https://t.co/c5Y5v4iWDU pic.twitter.com/J7vAN1xpFj

Considering that the price of Bitcoin took more than a year and a half to peak following the 2016 halving, the post-halving cycle theory further buoys the sentiment around Bitcoin. As seen throughout 2016, some analysts predict that BTC could gradually climb to a new all-time high without major corrections. That would strengthen Bitcoin’s momentum and decrease the probability of a sudden sell-off to key support areas.

Cryptowatch, a cryptocurrency market data provider operated by major U.S. exchange Kraken, suggested in a tweet that one possible forecast for Bitcoin is a new all-time high by November and $27,000 by the year’s end: “#Bitcoin tracking well against @100TrillionUSD’s [PlanB’s] Stock to Flow (S2F) model. Assuming 10% lost coins, $BTC forecasts include new all-time highs by mid-November and ~27K by the end of the year.”

The options market is beginning to show signs of accumulation as well, which supplements the long-term bullish case for BTC. Ecoinometrics, a Bitcoin market data firm, said bulls “bought a large bull call spread on Oct’20 two days ago. Yesterday there was a good amount of activity on the Sep’20 calls.” Given the rapid increase of options market volume since early 2020, it could fuel the uptrend of BTC.

For both the bullish and bearish cases, the persistent theme that would affect the price of Bitcoin throughout the fourth quarter is the performance of the U.S. dollar index, or DXY. Gold also saw a steep rejection as the DXY began to reverse at an important multiyear level. Gold has dropped by nearly 3% within two days, which is a level of volatility the safe-haven asset typically does not see.

Whether the DXY begins to climb and boosts the bearish scenario for Bitcoin until late 2020 or the optimistic on-chain metrics of Bitcoin offset the threat of a rising dollar remains uncertain. For now, many traders seem cautiously optimistic about the short- and medium-term trend of BTC. Until BTC clearly declines below $10,500, traders will likely remain skeptical in predicting a severe pullback in the near term.