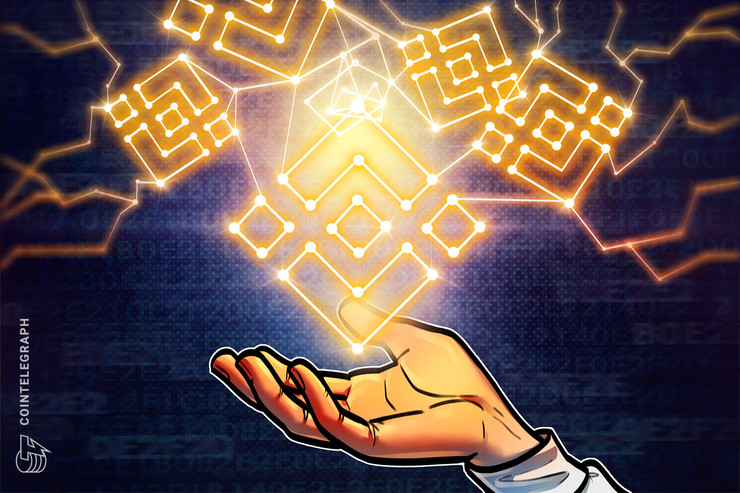 What is Binance Smart Chain?

Since it came on the scene in 2017, Binance has gone from a crypto exchange with an ERC-20 asset to an ecosystem of components housed under the Binance brand name. Binance has produced products and solutions to serve a number of purposes, such as crypto loans and peer-to-peer (P2P) crypto trading.

BSC and BC run parallel to each other. Binance Coin (BNB), Binance’s crypto asset, is used as payment for fees on both blockchains (in addition to playing other roles in Binance’s ecosystem). Moving between BC and BSC requires a bridge called Binance Bridge.

The Binance Bridge intends to make multiple blockchains more interoperable. It allows anyone to exchange their crypto assets into (and back from) Binance Chain and Binance Smart Chain wrapped tokens.

Wrapped tokens allow users to use coins and other blockchains on another chain, like Binance Smart Chain. Binance Bridge, for example, can facilitate the cross-chain conversion of Ethereum ERC-20 to Binance BEP-20, for example, if you move Tether (USDT) from Ethereum to Binance Smart Chain. These wrapped assets are backed by actual money and tokens on public addresses.

A world of blockchains

The modern crypto world began with Bitcoin’s (BTC) launch in 2009. From this single blockchain came many other blockchains aiming to improve Bitcoin’s model or provide additional capabilities such as multiblockchain interoperability.

The Ethereum blockchain, for instance, came on the scene in 2015 and has grown into a dominant blockchain in terms of projects building on its infrastructure. In pursuit of perpetual expansion, however, the crypto industry has continually pushed the limits of blockchain technology to look for improvements or alternate options, potentially in part due to limitations seen in Ethereum’s scaling. 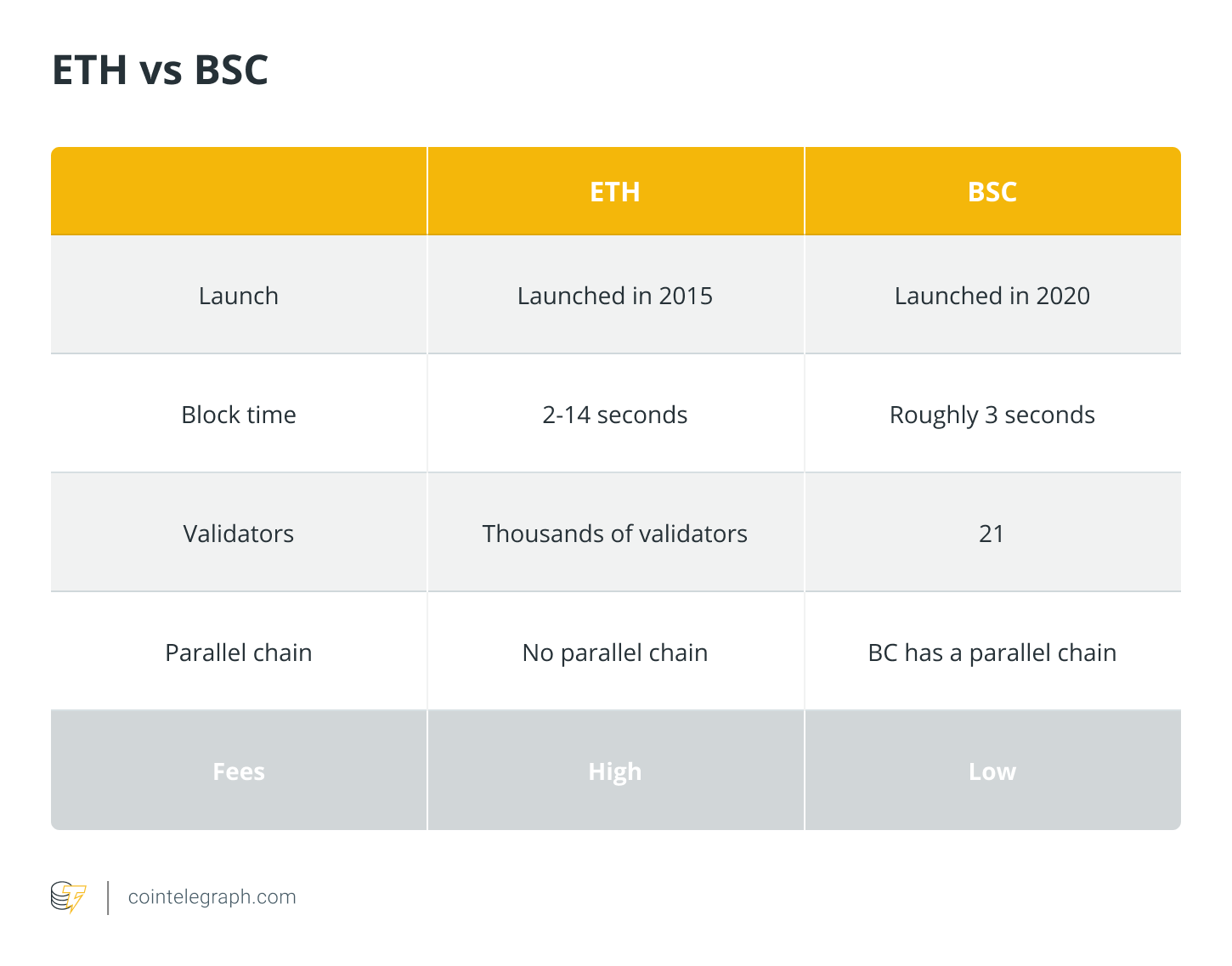 Enter BSC — one Ethereum alternative that was structured for speed and low-cost transactions while also touting smart contract capabilities.

Binance’s asset, BNB, initially existed as an ERC-20 token — a token built on the Ethereum blockchain. Binance launched its own blockchain in 2019 called Binance Chain and transitioned its BNB asset over to that blockchain.

However, Binance built BC in a way that would cater to trading, which placed limitations on BC in terms of capabilities. In addition, Binance launched its decentralized exchange (DEX), Binance DEX, on Binance Chain in 2019. Filling the gaps in BC’s limitations, Binance took BSC live in 2020, complete with smart contracts and Ethereum Virtual Machine (EVM) compatibility.

BC and BSC are separate blockchains, yet they are interoperable with each other.

The BSC blockchain is powered by 21 community validators that construct and check blocks on the chain, and these validators are compensated in BNB coins for their services. Meanwhile, they must be re-elected daily by staking governance in order to remain in the validator set. Validators staking the largest amounts of BNB make up the list of 21 validators, with that list updated every 24 hours. Staking BNB on BSC results in rewards based on fees paid for transactions on the BSC blockchain.

Is Binance Smart Chain better than Ethereum? Given BSC’s 21 validator system, the BSC blockchain appears somewhat centralized, although it boasts notable scalability with block times around three seconds per block, while also requiring lesser fees than the high gas costs incurred on the Ethereum blockchain during parts of 2021.

However, the Ethereum blockchain is under construction en route to Ethereum 2.0, so an Ethereum/BSC comparison may be subject to change.

Binance’s BNB coin works on both BC and BSC as the method of fee payment for activity on these blockchains. What tokens are on Binance Smart Chain?

A Binance Smart Chain wallet holds assets compatible with BSC. While there is a native Binance wallet application for generating a compatible seed phrase, users are also able to use other EVM-compatible wallets such as MetaMask to perform transactions on the network. Since MetaMask is an Ethereum software wallet, it makes sense to ask how to add Binance Smart Chain to MetaMask.

The Ethereum Virtual Machine is basically the Ethereum blockchain’s main foundation. When a blockchain is EVM compatible, it means that it can interact with and understand the Ethereum system.

Since BSC is EVM compatible, one wallet seed phrase controlled by a holder may result in BEP-20 tokens and ERC-20 tokens having the same wallet address, even though the assets are still on their own respective blockchains.

Wondering how to use Binance Smart Chain? Well, a person might use BSC via trading BEP-20 tokens on a BSC-based DEX. A developer might choose to build a DApp on BSC. A decentralized finance (DeFi) project may also choose to build a token on BSC.

The future of Binance Smart Chain

Following Binance Smart Chain’s 2020 birth, the blockchain achieved significant attention, touting high activity and building on the chain. BSC began with a few simple intentions, although its goals changed after the blockchain garnered such notable activity.

Going forward, BSC aims to facilitate broader interoperability in the blockchain world, among blockchains themselves as well as DApps and assets — all working amid a compatible ecosystem.

The future of any blockchain is obviously unknown, although trends may potentially hint toward certain directions. Given the growth of the crypto industry and the desire for speed matched with low fees, BSC has given the public an option for building upon that differs from the Ethereum blockchain.

However, Ethereum holds a strong position in the crypto industry as an asset and blockchain. As mentioned earlier, Ethereum is also going through a transition to PoS, which aims to improve the network.