3 reasons why Bitcoin suddenly dipped under $10K today — and recovered

The price of Bitcoin briefly dropped below $10,000, causing the entire cryptocurrency market to slump in a short period.

The price of Bitcoin (BTC) dropped to sub-$10,000 across major exchanges again on Sep. 5, marking two consecutive days of testing the crucial level. Other major cryptocurrencies, including Ethereum’s Ether (ETH), fell by nearly 10%. 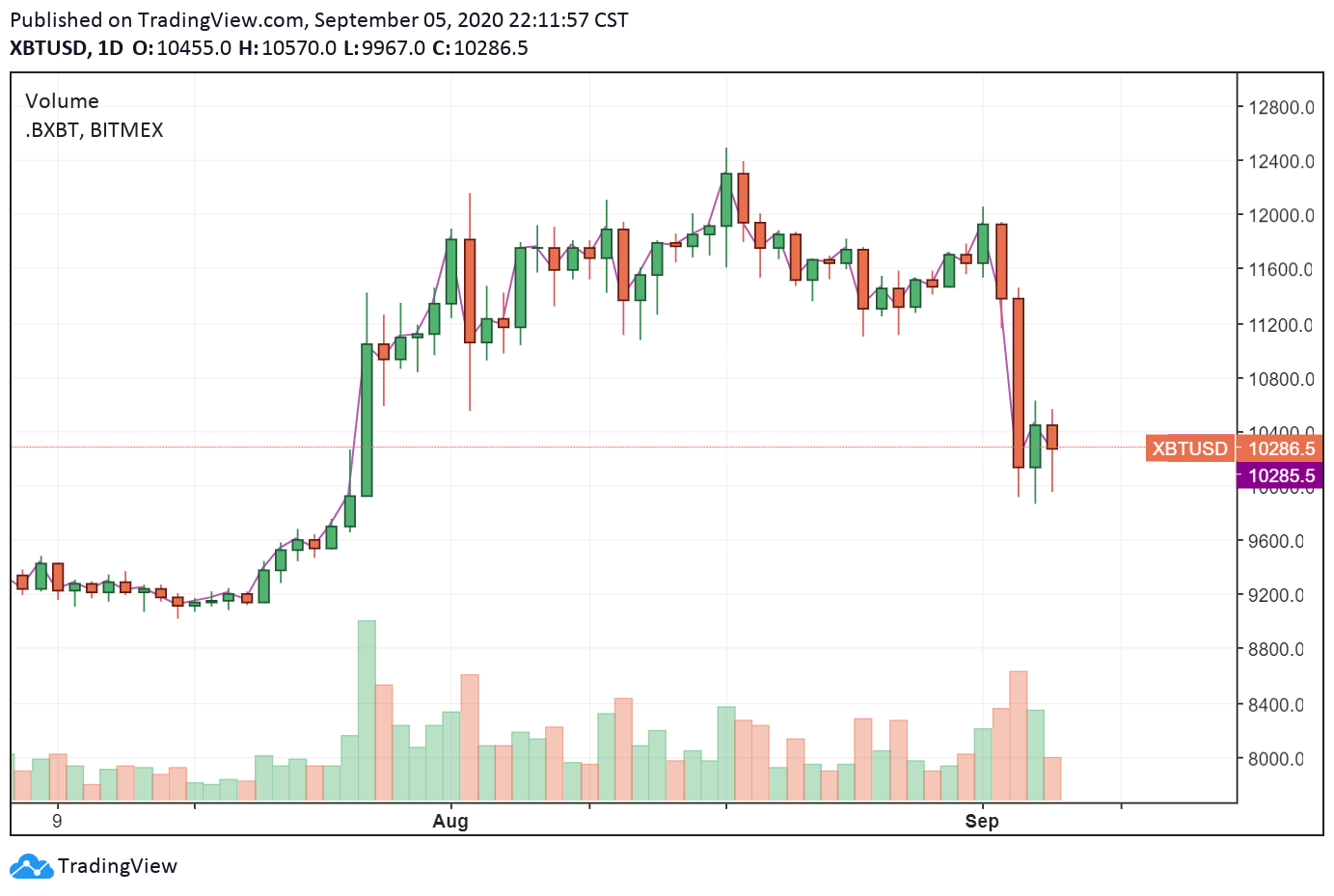 Three factors likely contributed to the abrupt drop of Bitcoin include miners, a strong dollar and whales taking profits.

When the price of Bitcoin suddenly dropped by 5% to $9,975 on Binance, BitMEX liquidations were below $40 million. Typically, when a massive price movement occurs, it causes over $100 million worth of futures contracts to get wiped out.

The futures data suggests that the selling pressure came from the spot market. While possible, there is a low probability that retail investors began to dump aggressively at above $10,500.

Whales taking profit at $10,500, which has historically served as a multi-year resistance level for Bitcoin, is more likely.

But whales have been taking profit since Bitcoin achieved $12,000. As Cointelegraph previously reported, a whale sold at $12,000 after “HODLing” BTC for over two years.

“Miners send a certain amount of BTC to exchanges periodically, so they already have a large amount of BTC in the exchange. Whenever they decided to sell, it seems they move a relatively significant amount of BTCs to other wallets, and some of them are going to exchanges.”

The gradual sell-off of BTC by miners since mid-August could have built significant selling pressure on Bitcoin. However, Poolin vice president Alejandro De La Torre emphasized that it is challenging to accurately track miner outflows. He noted:

“I can reassure you that CryptoQuant does NOT know which wallets are owned by Poolin. perhaps it's a handful of (big) miners they are tracking... even still, many assumptions.”

A common theme throughout the past two weeks — as Bitcoin consolidated — was the strengthening of the U.S. dollar. The USD began to show signs of recovery after four months of downside while the euro began to slump.

Since both Bitcoin and gold are valued mostly by the U.S. dollar, and many BTC traders are based in the United States, the increasing value of the dollar contributed to BTC’s weakening momentum.

Furthermore, the substantial decline in the price of ETH could have amplified the downtrend. On Sep. 5, ETH dropped below $360, to as low as sub-$340. A well-known trader known as “Byzantine General” said if ETH falls below $360, $290 is the next likely target. He said:

“I've learned that this is an ‘ascending, right angled, broadening formation.’ Very typical after an uptrend, and a pretty neutral pattern: 55% of the times breaks out upwards. But man, 360 better hold or otherwise we go straight to 290, possibly 250.”

Ether front-ran the Bitcoin rally since early April and the weakness in ETH could have intensified the short-term drop of BTC. But Bitcoin has since recovered, stabilizing above $10,200. The trend demonstrates decent buying demand above $10,000, which could result in longer consolidation.

Michael van de Poppe, a full-time trader at the Amsterdam Stock Exchange, said the move could be bullish for BTC, noting: