Here are five more bearish candlestick patterns that every Bitcoin and crypto trader should recognize to protect against losses and take their trading skills to the next level.

Many traders like to play both sides of an asset’s price action. But in order to play the bullish and bearish trends, one needs to be aware of the positive and negative signals contained within various candlestick patterns.

Knowing how to interpret candlesticks adds insight to the signal provided by various technical analysis indicators and the path a digital asset might take.

Like the Tweezer Bottom, the Tweezer Top is a trend reversal pattern that indicates buyers are running out of steam and the approaching end of an uptrend. 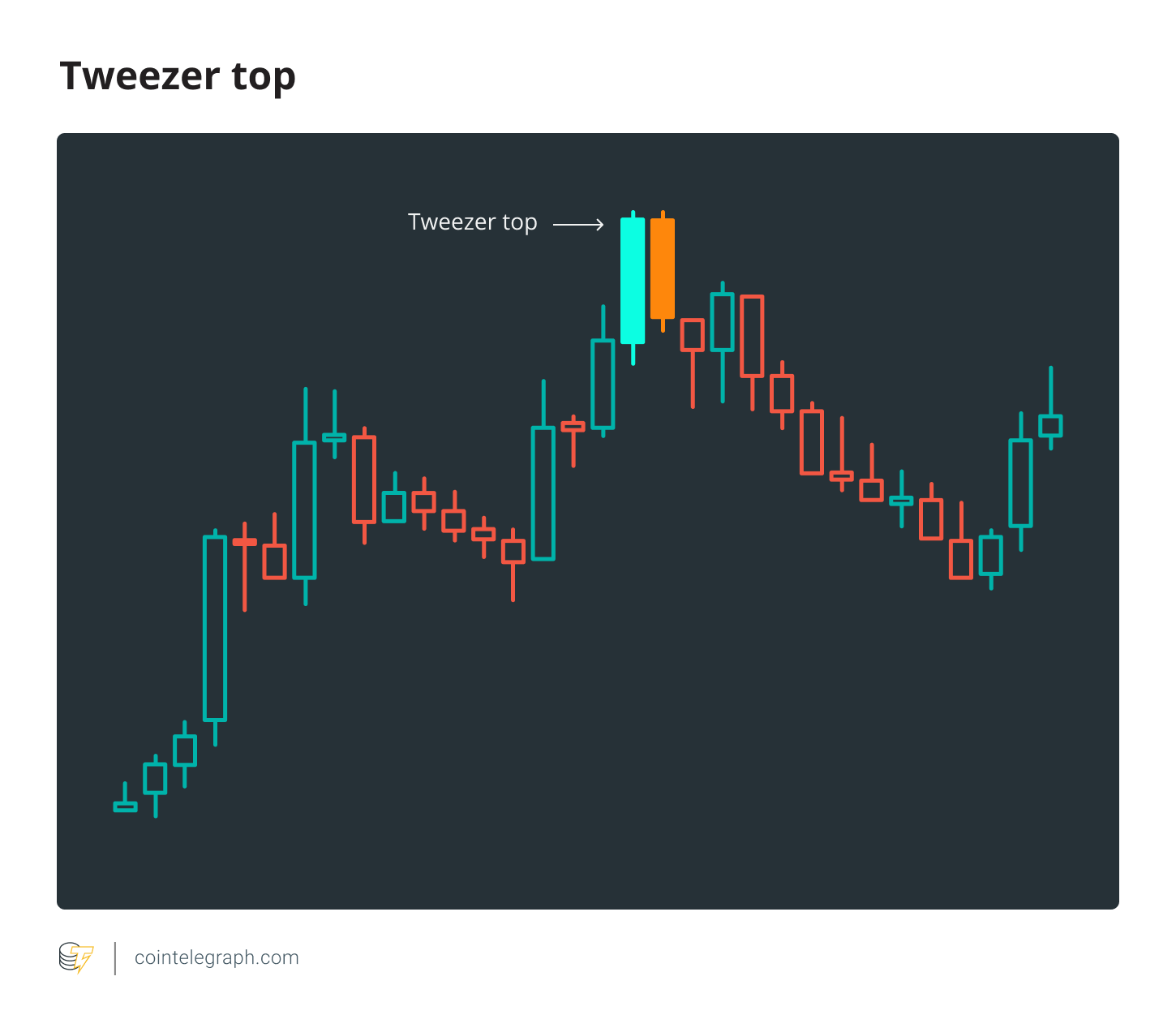 In this pattern, both candlesticks will have the same high and alternating colors with the left candle being green and continuing the uptrend and the following candle (red) showing weakness.

Many times, the real body length of both candles is identical but more confirmation comes when the left (green) candlestick body is longer than the right candlestick.

When observing this pattern, traders typically look to see if its occurrence corresponds with a market high or near a key resistance or trendline.

The Three Black Crows pattern is the inverse of the Three White Soldiers formation. The pattern signals that a strong reversal is in the making and recognized by the three long downward plunging candlesticks. 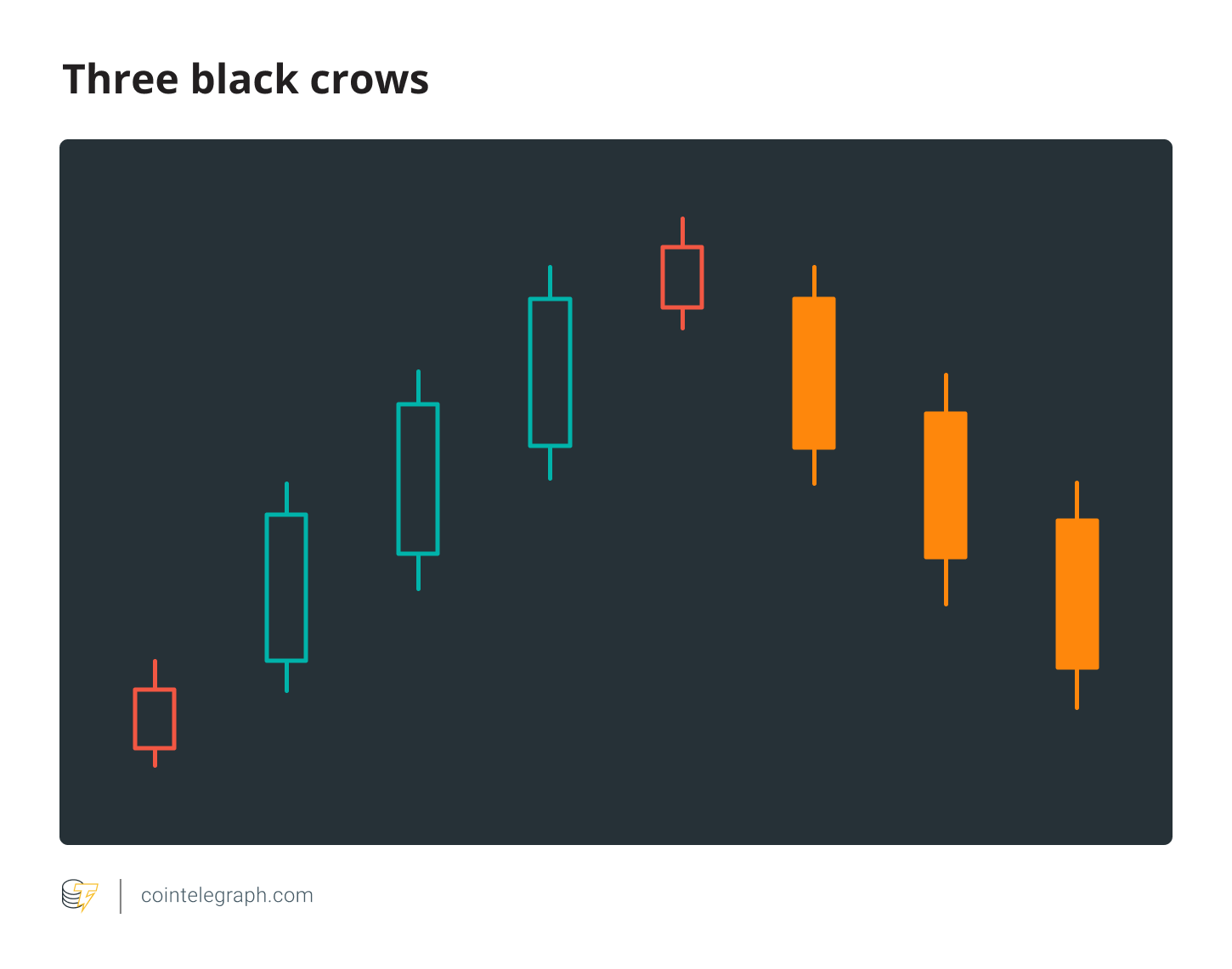 As shown by the diagram, the open of each day is a little higher than the previous close but the price closes each day at lower levels. To confirm the pattern, the last two candlesticks should open within the real body of the previous candlestick but close lower.

The Three Inside Down pattern can be found right at the top of an uptrend and signals that a reversal is in order. The candlestick pattern shows the first candle as a long bullish (green) one reaching the top of the uptrend. Then the following candle body dips to the middle of the first candle. 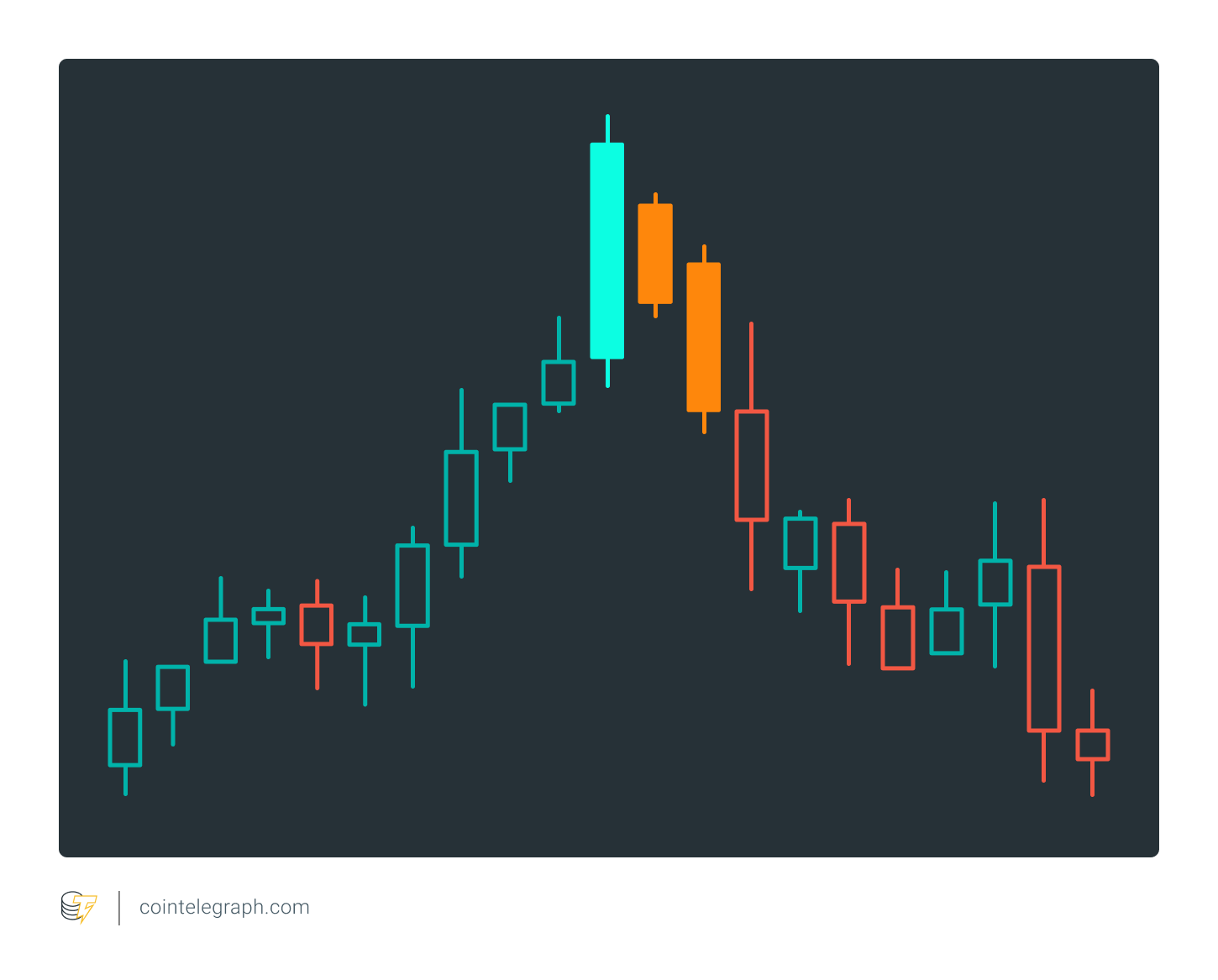 The third candlestick closes below the real body of the first candlestick, which is confirmation that sellers have taken control of the asset’s price. Rather than wait for confirmation of the Three Inside Down pattern, many traders interpret the inside bar candle of the middle (2nd) candlestick as a sign of indecision and hint that the price could be reversing course.

Traders will also observe other indicators like the moving average convergence divergence (MACD), relative strength index (RSI) and exponential moving averages to determine whether or not the uptrend is reaching exhaustion.

The Bearish Advance Block frequently appears on cryptocurrency price action charts and is a candlestick pattern all traders should become familiar with. 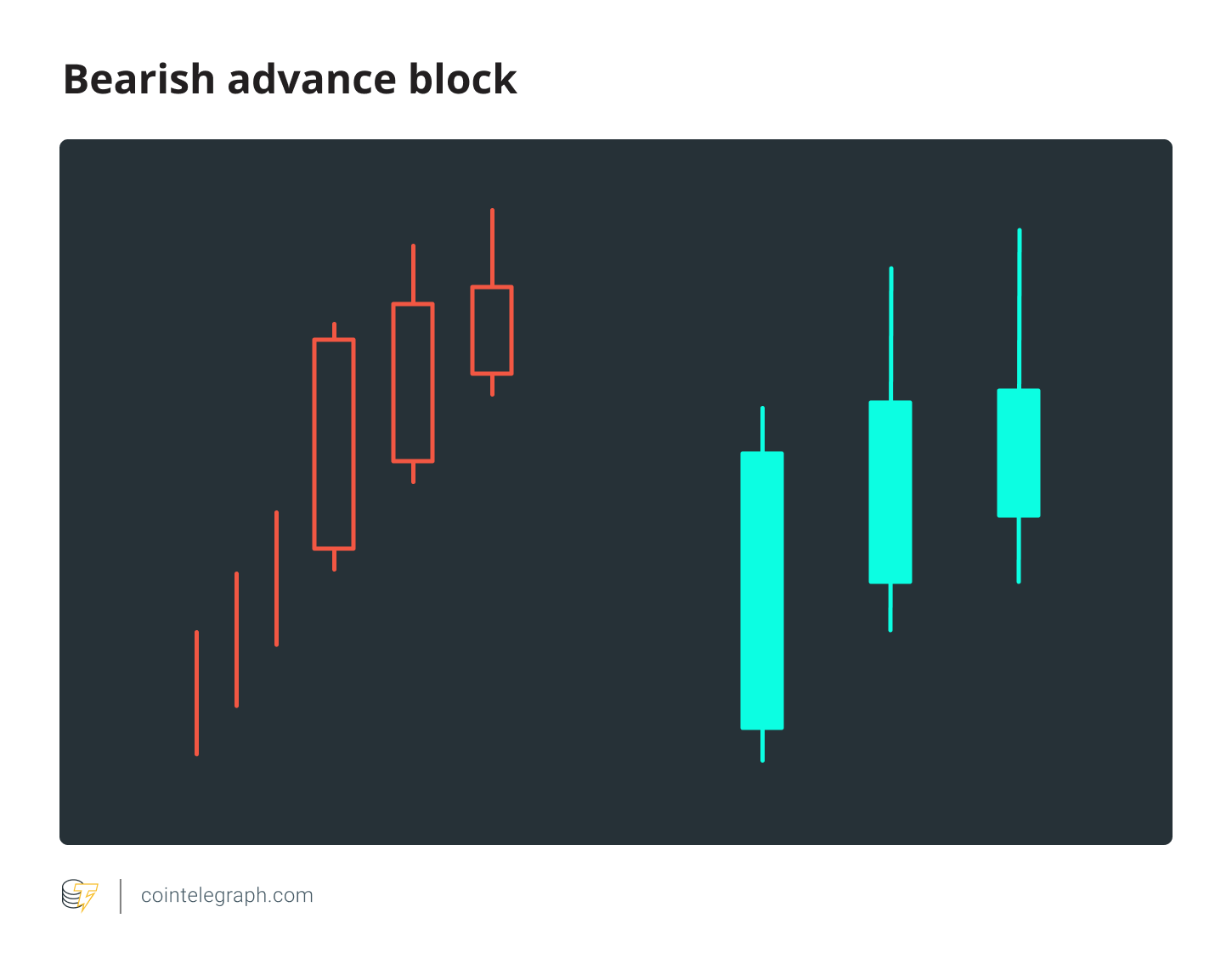 In a nutshell, the pattern signals weakness within an uptrend as the price continues to push higher but the real bodies of each candlestick become shorter and shorter, indicating a decrease in momentum and increasing indecision of traders.

As shown by the diagram, it appears that buyers remain in charge with each candlestick painting a wick with a higher high and the price closing higher each day. But the telling sign is that the wick of each candlestick becomes longer and longer as the real bodies become shorter. The distance between each daily close also becomes shorter.

The Bearish Breakaway pattern is a short-term reversal signal that begins with a long bullish candlestick. The following candlestick gaps upward and continuation is seen through the third and fourth day. 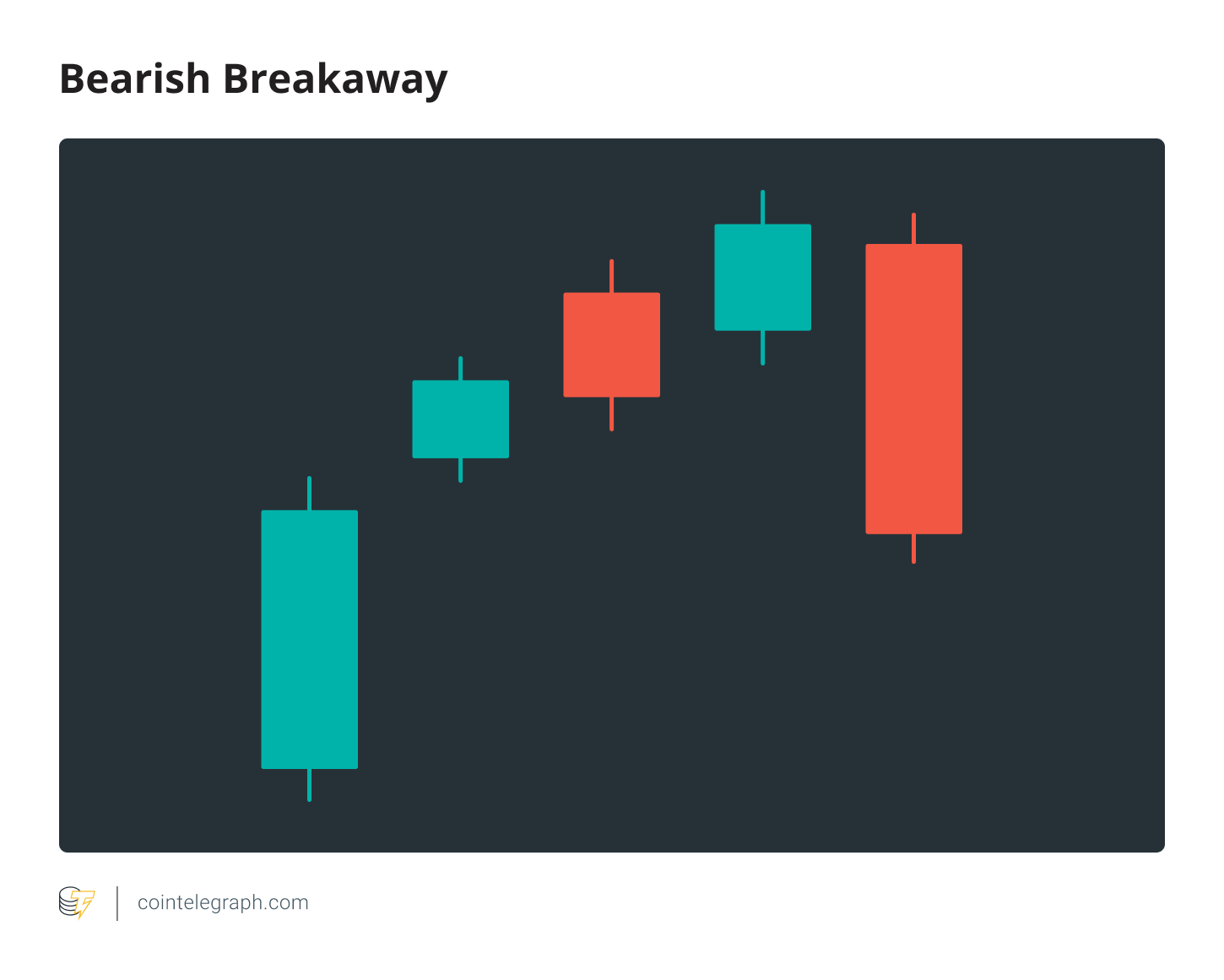 To traders, the uptrend appears to gain momentum after the gap up of the second day but the shortness of the third and fourth candlestick and longer shadows on each candlestick suggest that the uptrend is losing steam.

The fifth (last) candlestick is a long bearish candlestick that clears the previous gains of the last three candlesticks and closes slightly above the gap created between the first and second candles.