There are simple bearish Japanese candlestick patterns that every Bitcoin and cryptocurrency trader should know — here are 5 of them.

As discussed in a previous article on bullish candlestick patterns, trading using Japanese candlesticks is the most popular method for analyzing price action by crypto traders.

There are many patterns worth learning and understanding — some of the most essential bearish patterns are discussed below. It is important to note, once again, that context and candle placement are essential in identifying patterns.

The same exact candlestick can be bullish when located in a different place on the chart.

The Bearish Harami is a two candle pattern that signals a likely reversal in price. In this pattern, the first candle is large and green and is followed by a red candle with a smaller body. 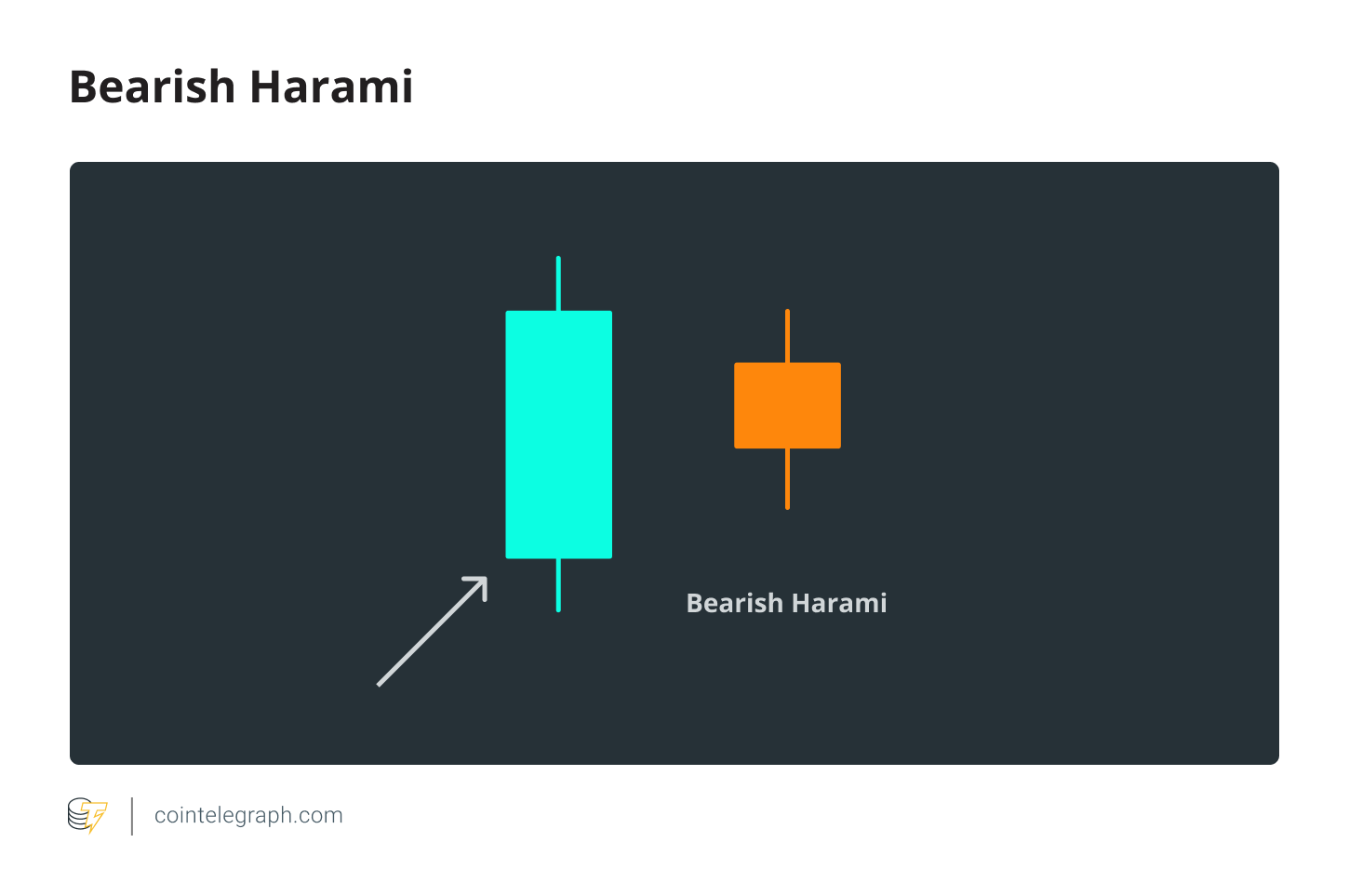 To be valid, the second candle must be completely within the range of the body of the first candle. Another notable version of this pattern is the Bearish Harami Cross, where the second candle is a perfect doji.

Price action following this pattern is often as ominous as its name, Dark Cloud Cover. This is another 2 candle pattern that signals a likely bearish reversal at the top of a bullish movement. The first candle is generally large, always green, and is followed by a similar red candle. 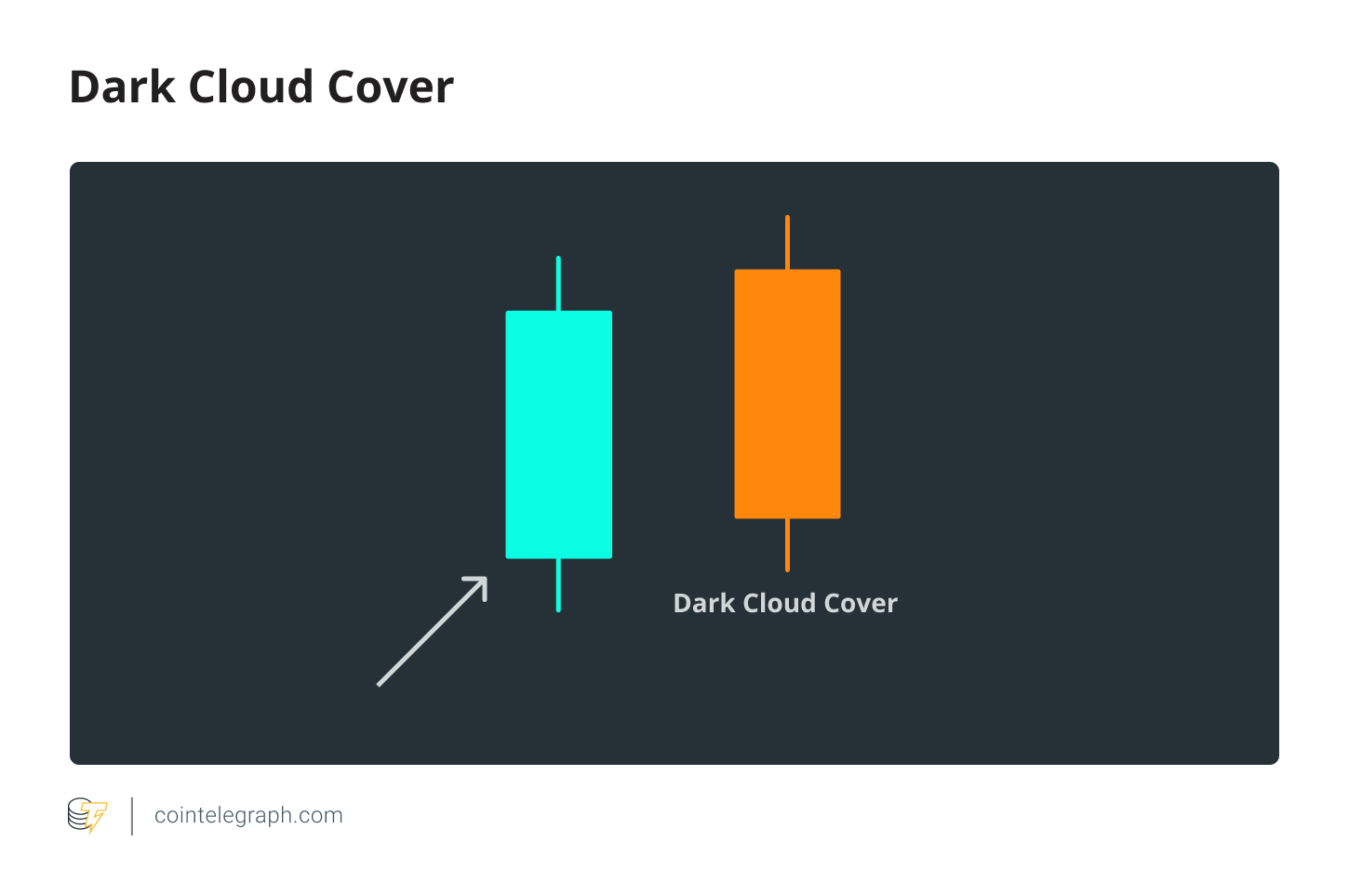 The second candle opens with a gap up to a fresh high but closes the session more than halfway into the body of the first day’s candle. This is a signal that bears have dominated the session, pushing the price down with the intention of following through on future candles.

The Evening Star is a bearish reversal pattern that appears at the top of an uptrend with a large bullish candle, followed by a gap up to a small-bodied candle and a gap down to a red candle that closes below the midpoint of the first day. 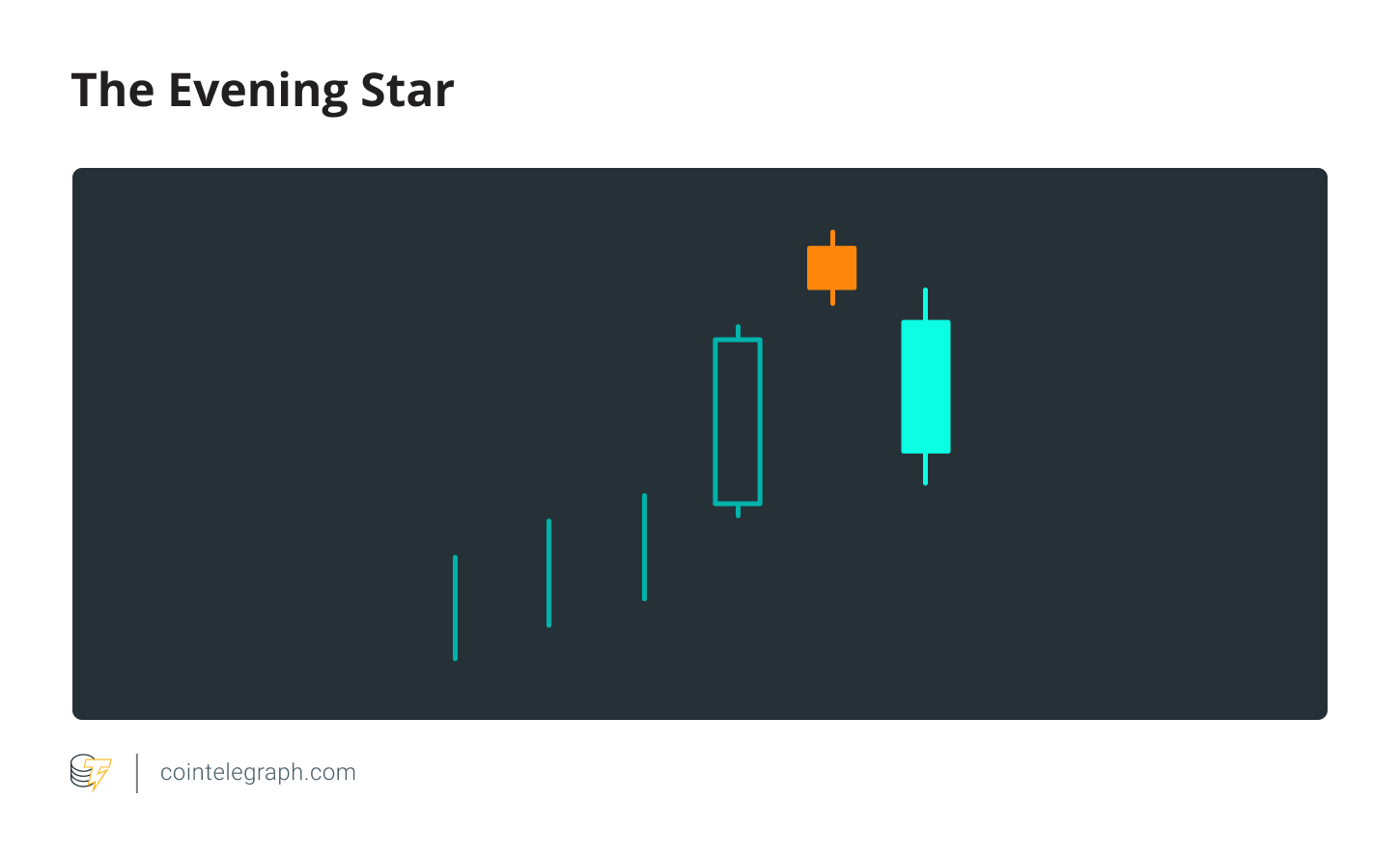 This pattern is confirmed by the candlestick that follows the star, which must be a red candle that closes well into the body of the first candlestick.

In legacy markets, there must be gaps between each of the candles. However, since crypto trades 24/7 and gaps are rare, some technical analysts argue that this pattern is still valid without the gaps.

Similar to the previously discussed patterns, the shooting star is a bearish reversal pattern. This two candle pattern appears during an uptrend and signals an upcoming reversal to a bearish bias. 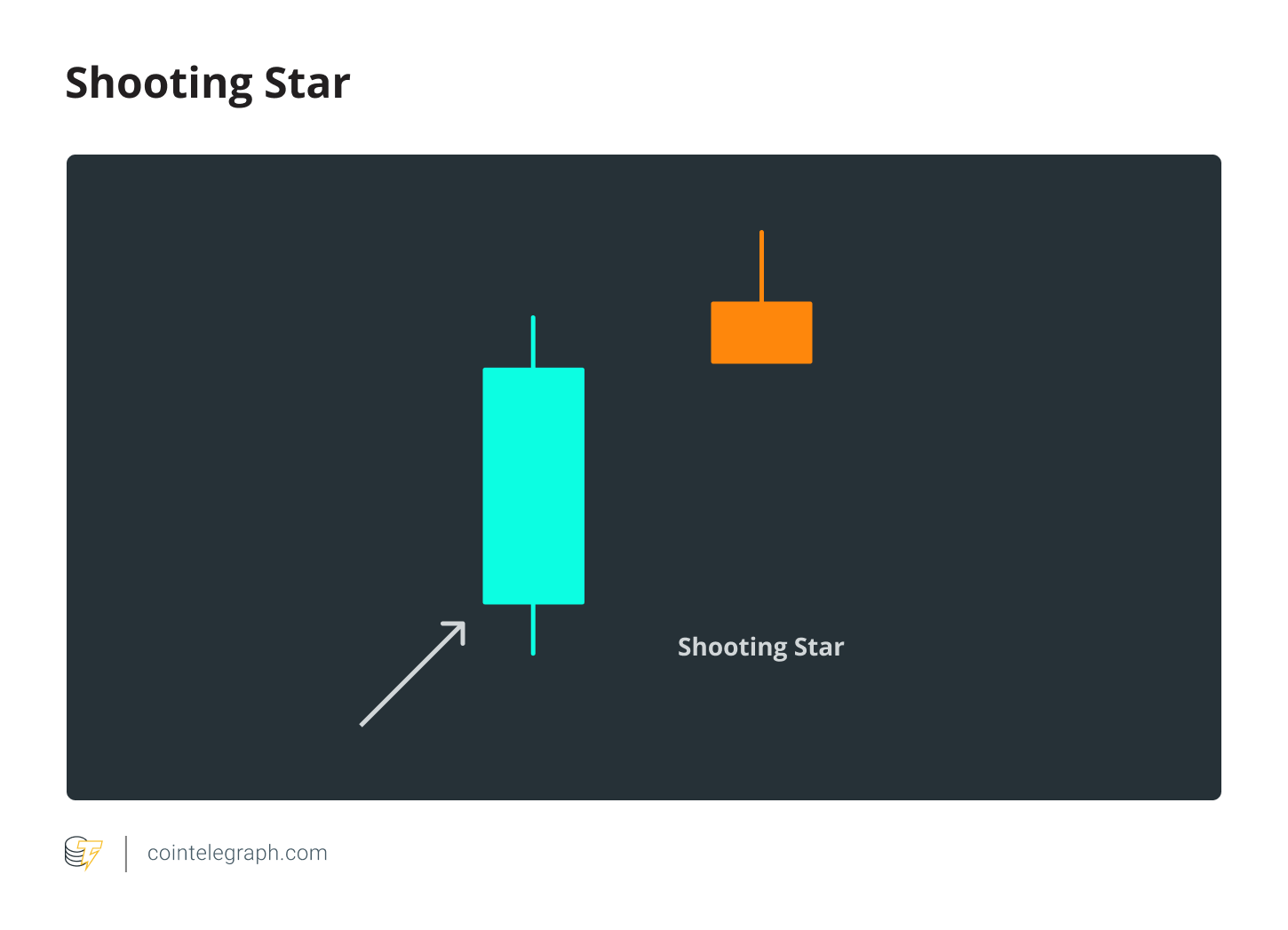 The first candle is green, followed by a green or red candle that has a long upper wick and small body. The second candle looks like an inverted hammer, which is bullish when located at the bottom of a trend.

The long wick as an indication that bulls controlled much of the session, before losing ground to bears, who pushed the price back down to close near the daily open. This is a signal that price depreciation is likely and is confirmed when followed by a bearish candle.

The Hanging Man is a single candle pattern that indicates a likely reversal from bullish price action to bearish price action. This candle has a long lower shadow and a small body and appears at the top of a trend or during an uptrend. 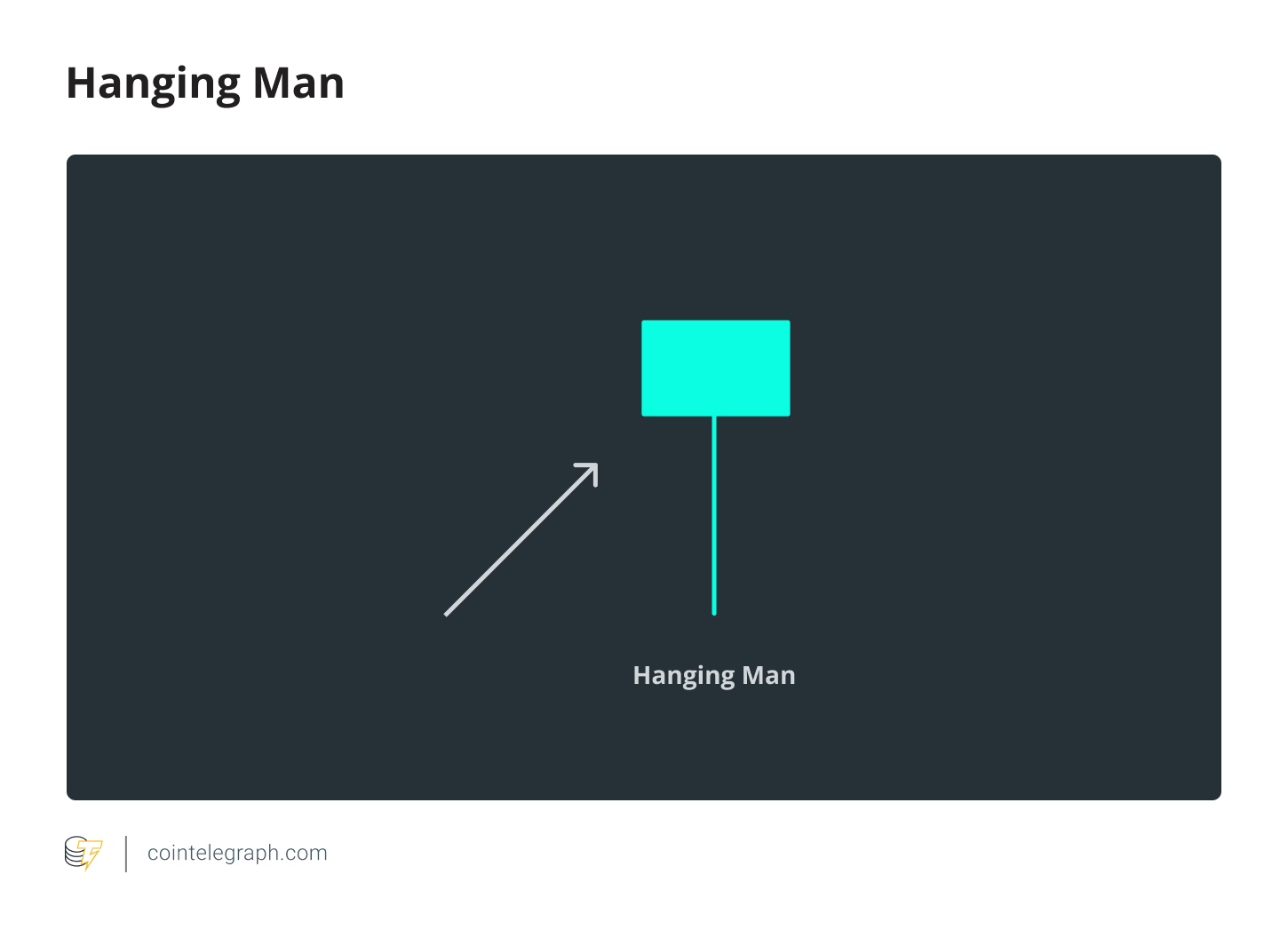 Once again, when this candle is at the bottom of a downtrend, it is called a hammer and signals a bullish reversal — context matters. This candle shows that sellers were able to take control during a portion of the period. It indicates that bears defended the current price and are likely to continue selling through the subsequent candle.

Get to know these candlestick patterns — they are essential to understand as a crypto trader!