There are simple bullish Japanese candlestick patterns that every Bitcoin and cryptocurrency trader should know — here are 5 of them.

Candlestick charts are favored by crypto traders due to their visual appeal and simple to understand nature. Their history lies in the Japanese rice trading and the system has been updated and utilized throughout the years, becoming the most popular method of charting assets.

They are called candlesticks because of their rectangular shape and long lines (wicks) formed by price action during a certain time period. Candlesticks can also give clues to price action and the mood of the market towards an asset. Over time, multiple candlesticks form patterns that give traders signals that help bulls and bears make trading decisions.

Here are 5 simple candlestick patterns that indicate a bullish price movement that every crypto trader should know.

The bullish engulfing candle appears at the bottom of a downtrend and indicates an increase in buying pressure. 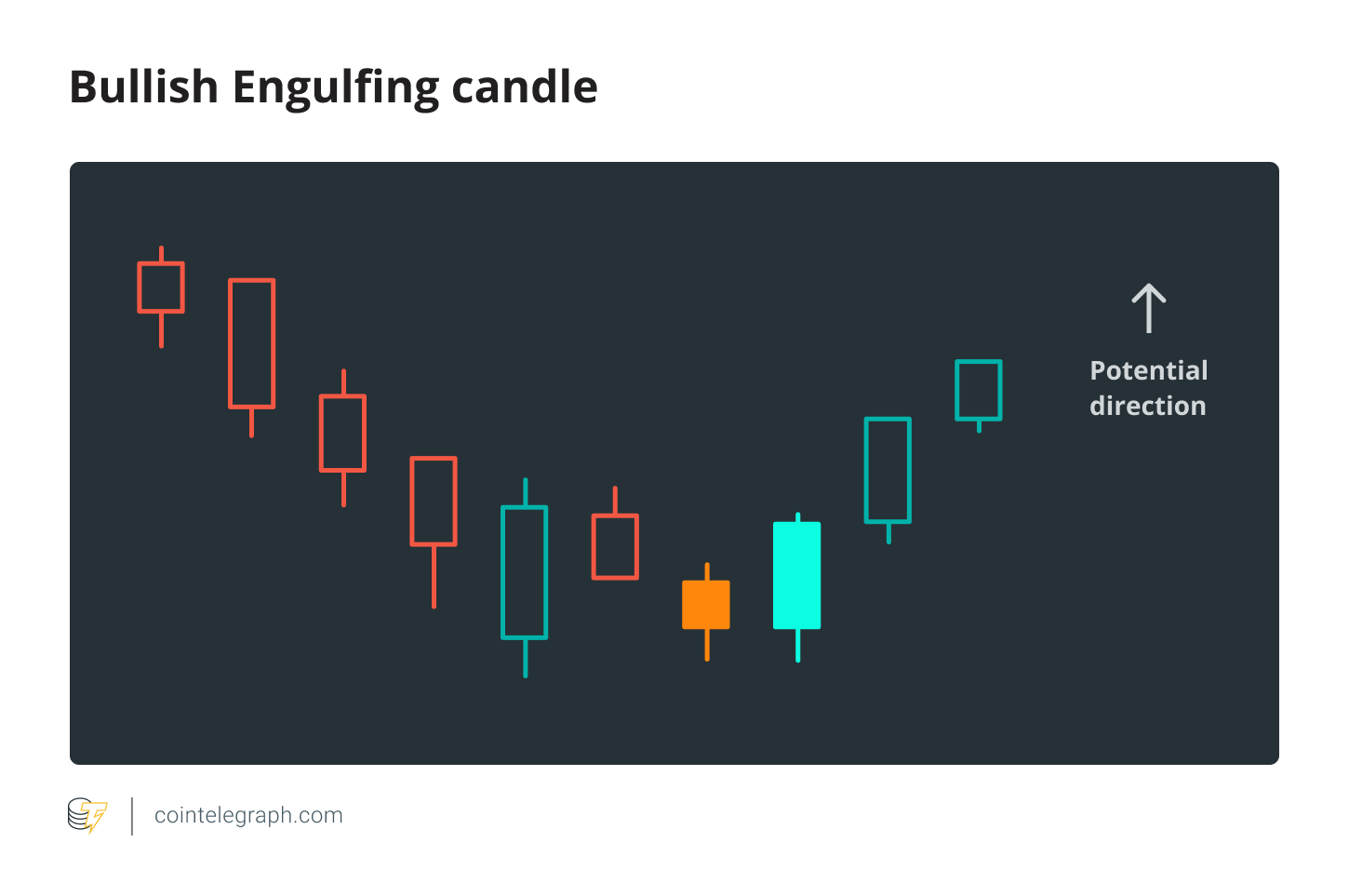 This pattern often triggers a reversal in trend and it indicates that buyers have entered the market and are likely to drive prices up further. The pattern involves two candles, with the second candle completely engulfing the body of the previous red candle.

This happens when price opens lower on the second day than the first day’s close, but price increases throughout the candle, closing higher than the opening of the first candle. The ideal way to trade this pattern (and any pattern) is to wait for confirmation on the following candle that price is continuing up. Conservative traders do not enter until the next candle closes higher than the price where the second candle of the pattern closed.

Gaps are rarely seen in crypto markets, or candles opening significantly higher or lower than the previous one because there are no breaks in a 24/7 market. Therefore, an equal bottom (shown above) qualifies as a bullish engulfing.

It is important to note that context and placement matter with every pattern. This is NOT valid in an uptrend, and is, in fact, a bearish pattern in that context — it is only tradeable when it appears at the bottom of a move.

The bullish hammer is also a candle that indicates the likely bottom of a trend. It is characterized by a long wick at the bottom with a short body on top. That shows that bears pushed the price down during the time frame, only to see significant buying pressure step in to close higher than the candle open. 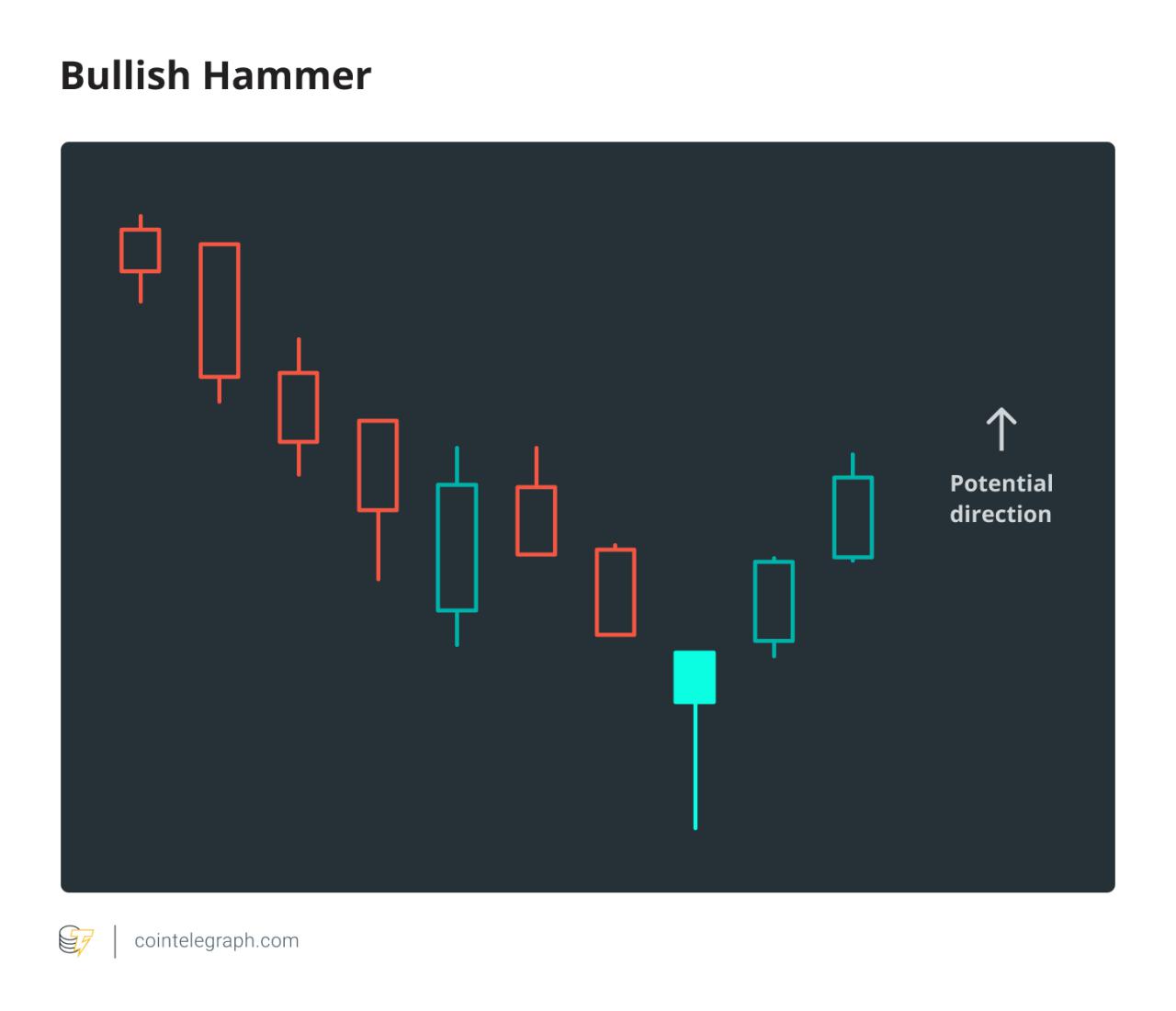 Many traders consider a candle a bullish hammer even if the close is slightly below the open as long as there is a long tail and small candle body on top. This is a single candle pattern, but smart traders wait for a confirmation in the change of direction, characterized by subsequent bullish candles and increased buying volume.

The three white soldiers pattern occurs over three candles. It consists of consecutive long green candles with small wicks, which open and close progressively higher than the previous day. 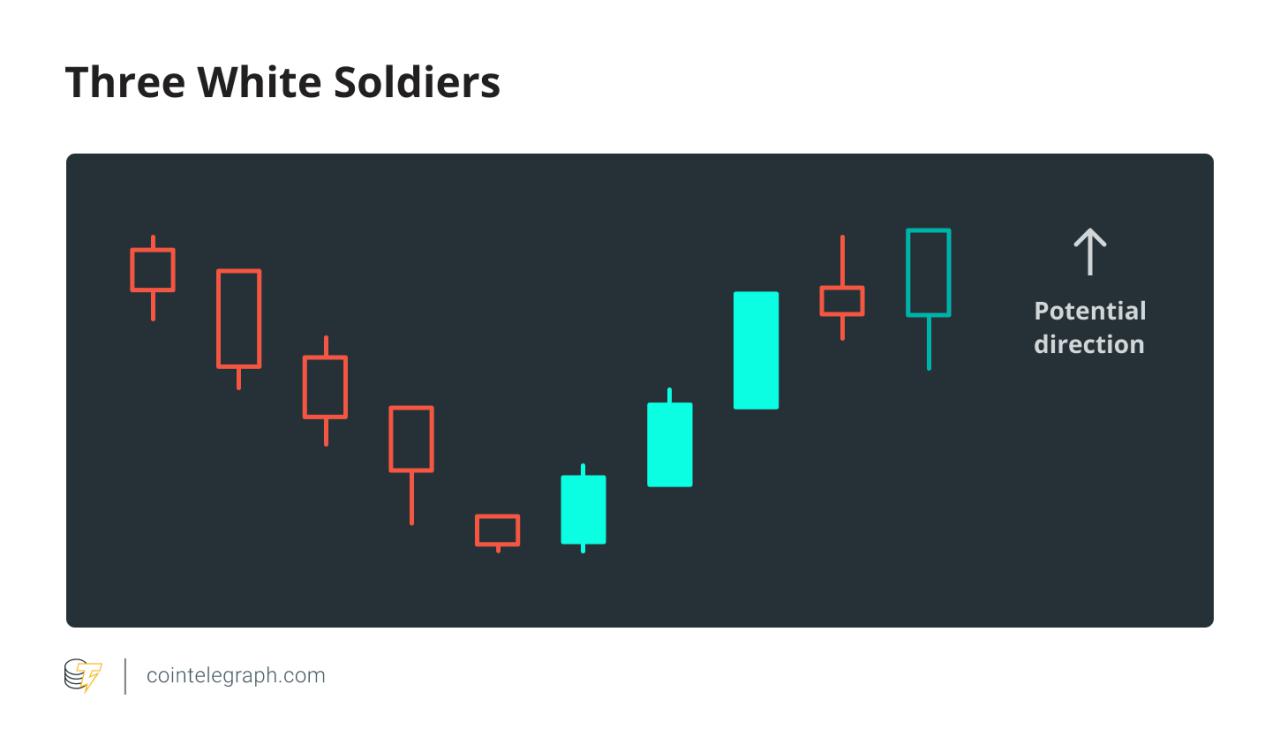 It is a very strong bullish signal that occurs after a downtrend and shows a steady advance of buying pressure.

In general, when a candle is closing with small or no shadows, it suggests that the bulls have managed to keep the price at the top of the range for the session. The three white soldiers appear when buyers take over the rally all session and close near the high of the day for three consecutive candles.

The “rising three methods” is a bullish candlestick pattern that is comprised of three short bearish candles contained within the range of two larger bullish ones. 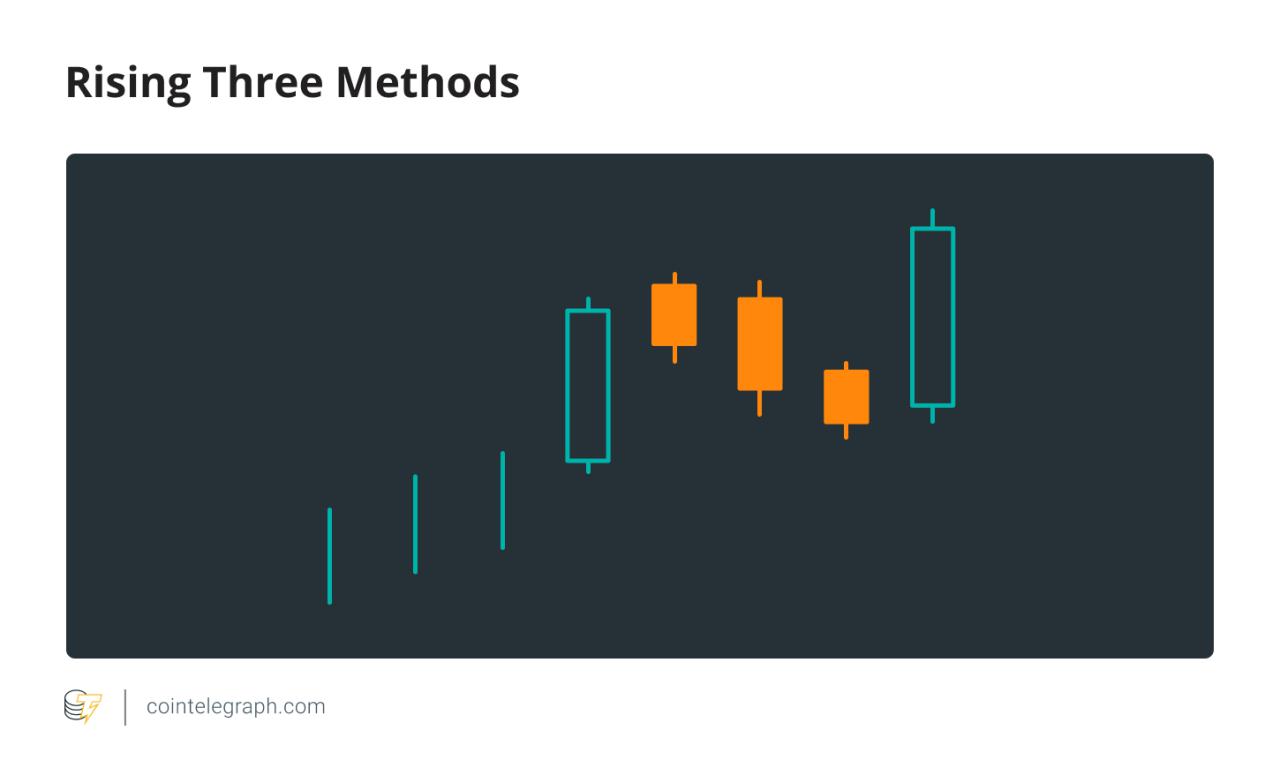 The pattern shows traders that — despite some selling pressure — buyers are retaining control of the market. For classical pattern traders, the rising three methods pattern often forms as a bull flag or descending wedge — a form of bullish consolidation after a clear move up. This is a continuation pattern of a bullish trend, not the sign of a bottom or reversal.

The piercing line is a two-stick pattern made up of a long bearish candle followed by a long green candle. 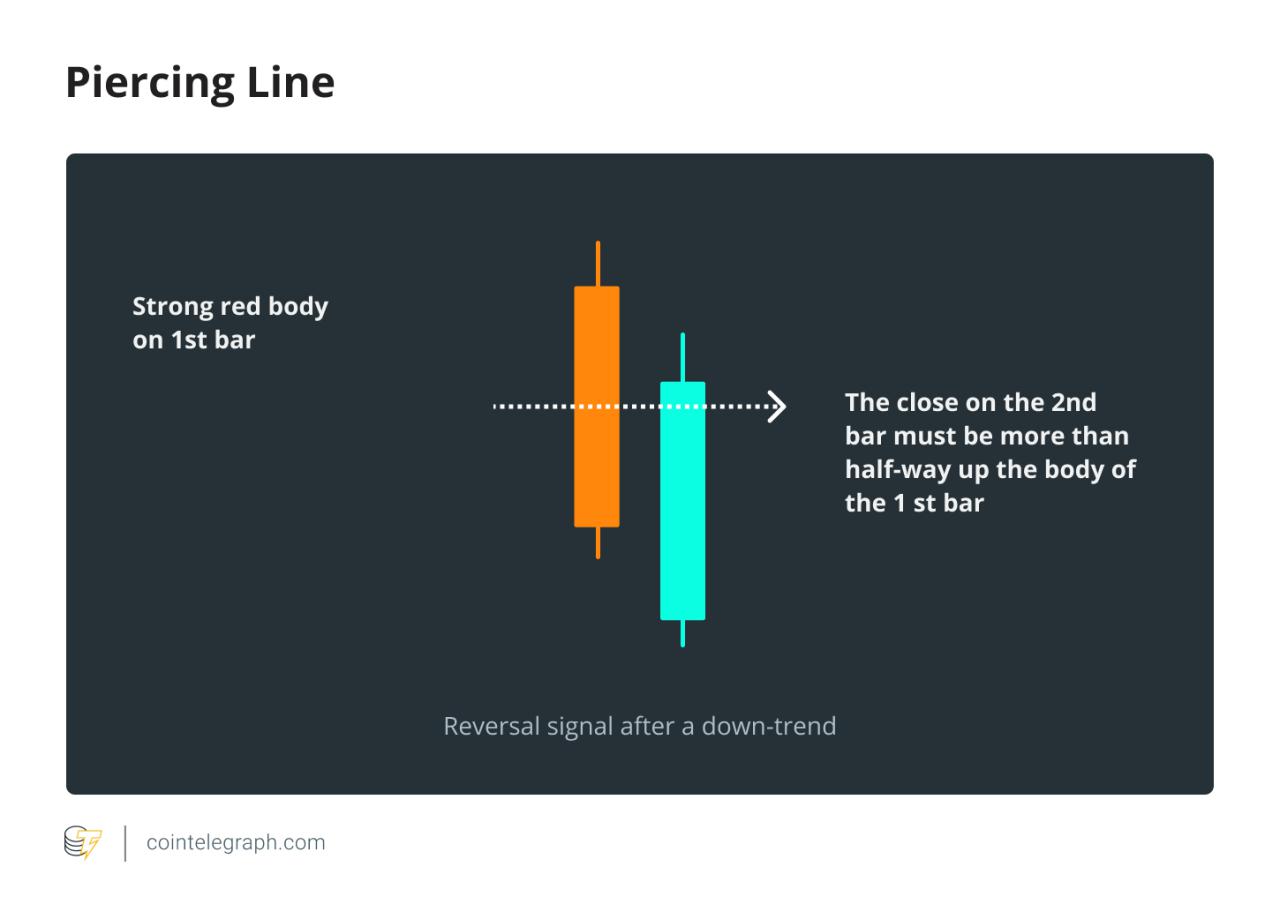 A key signifier of this pattern is a significant gap down between the first candlestick’s closing price and the green candlestick’s opening. At the beginning of the trading session, it often appears bearish because of the significant drop during off-hours.

However, buying pressure increases throughout the candle, with a close more than halfway up the body of the first, bearish candle, indicating that bulls have taken control and are interested in buying at the present price.

There are hundreds of patterns that a trader can learn when mastering Japanese candlesticks but these are just a few simple ones that can help any trader in any market.

The views and opinions expressed here are solely those of the author (@scottmelker) and do not necessarily reflect the views of Cointelegraph. Every investment and trading move involves risk. You should conduct your own research when making a decision.