“The world’s first Swiss mechanical watch to be certified on the blockchain” has been unveiled — and just 2,010 pieces are being made.

A project says it is offering the world’s first Swiss mechanical watch to be certified on the blockchain — with each model hiding an irresistible secret.

Gvchiani and Cryptolex have teamed up to develop MasterBlock — a limited-edition timepiece that “pays tribute to the technologies of Bitcoin and blockchain.”

Its atypical, block-shaped appearance is built using DLC titanium, while the X outline reflects the monetary code of Bitcoin (XBT). Last but not least, the blockchain is symbolized by a leather strap designed to represent decentralized networks.

Work on the watch has been underway since 2015, with both companies taking pride in constructing a product with an unusual design and a strong visual identity.

Every MasterBlock is adorned with an exclusive blockchain address inscribed on the dial. One of four QR codes are also visible at all times, meaning the wearer can use their watch as a titanium wallet if they so wish. Users can wear their wallet from a blockchain of their choosing, including Ethereum, Bitcoin and Dash — and if they don’t have a wallet, they can receive assistance in setting one up.

Water-resistant to a depth of 30 meters, the chronograph SW500 mechanic self-winding caliber boasts a 48-hour power reserve. Along with an indicator for the day and date, hands display seconds, minutes and hours with precision. The designers say the watch, complete with 28,800 vibrations per hour and 25 jewels, shows “exceptional precision in all seasons” — delivering accuracy within a margin of five seconds per day.

A total of 2,010 MasterBlock pieces are being produced by MasterBlock — and the production steps taken to bring each watch to fruition are being written into the blockchain so the proud owner can discover the history of their piece.

In a nod to the inner mechanics of blockchain, every MasterBlock is linked to the watch that came before it, creating a chain and a lasting connection between every owner.

While 2,008 of the watches are being sold at a flat rate of 16,500 Swiss francs ($16,646), two of them are going to be auctioned off. The first one to go under the hammer will be MasterBlock 0000 — otherwise known as “Genesis.” Number 2009, entitled “Satoshi,” is also going to be auctioned. A year of great significance, this was when Satoshi Nakamoto mined the genesis block of Bitcoin, heralding the exciting new era of cryptocurrency.

One of the most fascinating elements of MasterBlock is how a great secret has been distributed among the timepieces — a cryptographic enigma. However, this is not a puzzle that one watch owner can solve on their own. The project says at least 51% of MasterBlock holders need to come together in order to gain the maximum number of clues required to uncover the mystery. 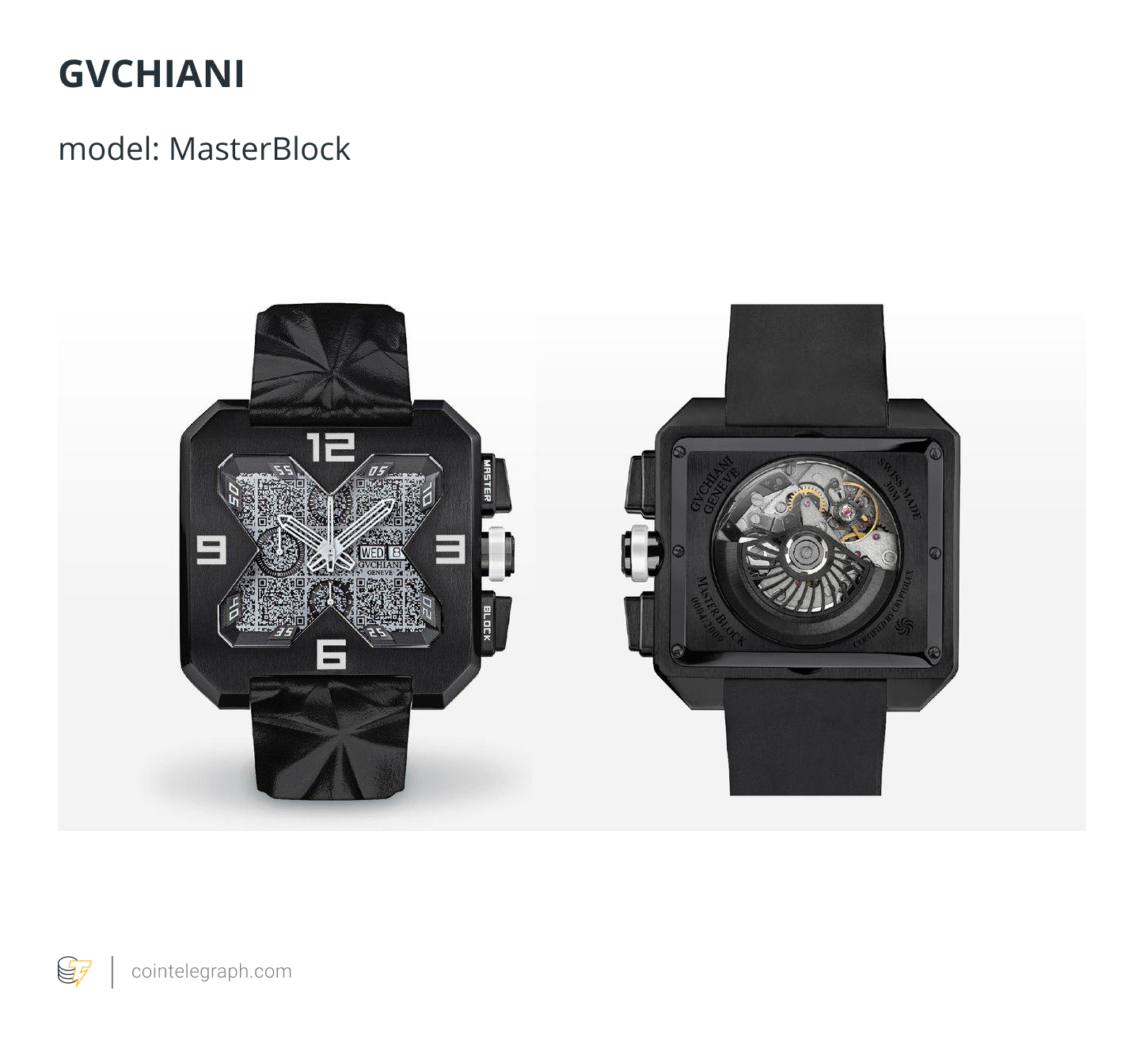 MasterBlock was designed by Shant Ghouchian, who has been “recognized for his talent and skill by the biggest names in fine jewelry and timekeeping, success was not long in coming,” according to a biography on the watch’s website. With a wealth of experience, Ghouchian launched Jewelry and Watch Settings, his own company, in 2008.

Several milestones have been reached in the MasterBlock project since the first watch was crafted in a Geneva workshop back in 2015. Cryptolex’s cross-blockchain certification, Ntity, was used in July 2016 — with Cryptolex and Gvchiani entering into their joint venture in November of that year. Intensive research and development took place in the first five months of 2017, and this focused on ensuring that a QR code could be elegantly embedded into the piece.

MasterBlock watches are now being produced and delivered to the public, and customers (called Pioneers) are able to reserve and purchase a number that is significant to them. It takes six months for reserved timepieces to be delivered, since every watch is crafted and delivered with great care to each and every Pioneer.