The share of investments in IEO is becoming much larger and catching up with the IPO market indicators with the mass adoption of “multiple IEO” and STEO trends.

The second quarter of 2019 demonstrated a growing popularity of the initial exchange offering (IEO), which has replaced the outdated initial coin offering (ICO) model. The new trend — the key role of which is played by a cryptocurrency exchange auditing projects and organizing token sales — has established itself positively among startups.

Crypto market stats show that over 65 IEOs have been launched in the past six months, with about 40 of them having reached their soft cap or even hard cap successfully. About 15 IEOs will be launched in the next three months. Notably, half of them are conducted by projects that have already completed their IEOs. All told, 245 projects conducted an IEO and managed to collect $3.4 billion over the past three years.

However, it can’t be said whether IEOs are still the latest trend in the crypto market, even though they have outperformed ICOs and security token offerings (STOs) in recent months, such as a certain IEO attracting investments that amounted to 79% of all funds raised from ICOs, IEOs and STOs.

While more crypto exchanges announce their support of IEO projects, a new crowdfunding trend is emerging on the crypto market: a shift to multiple IEOs. This resembles the initial public offering (IPO) market a few years ago, when large companies repeated rounds to expand their pool of investors.

As the crypto market is constantly evolving, many projects consider repeating their IEO rounds, especially if the previous one turned out to be successful. It’s a trend for which an exact name has not yet been established. Some call it a “second IEO,” while others refer to several IEOs being conducted by the same project on different exchanges as a “multilaunchpad IEO.”

One of the blockchain-backed international investment services that is conducting a multilaunchpad campaign, Roobee, is preparing for its third IEO. The company’s co-founder, Artem Popov, explained that this strategy is best when a company needs to expand its business globally:

“When promoting a real product, it is very important to offer it to a large audience. If you really have a strong and interesting idea behind your project, you need to give equal opportunity to users from different regions to participate in it. For this purpose, conducting IEO on different exchanges is a perfect match.”

Another new IEO subspecies that has appeared on the market is the security token exchange offering (STEO). The founder of this trend is Dreamr Inc., a social media and crowdfunding platform, which in September announced the world-first STEO on the IDCM exchange. Chris Adams, the CEO of Dreamr Inc., shared his thoughts about the trend created by the company:

“Inspired by IEO benefits we were seeking an effective way to adapt to the changing market. IEO has replaced the outdated ICO and has established itself as an all-in-one method of attracting investment, which meets security standards and serves as a reliable way to issue, offer and trade a token. STEO is just an extended version of IEO combining the exchange offering security and the investment attractiveness of STO model. I guess many traditional exchanges have been looking to do something like this for years.”

Multiple IEOs and STEOs vs. an IPO: Who wins the race?

Jay Ritter, a finance professor at the University of Florida and IPO expert, spent many years studying the development of the IPO market and has come to the conclusion that the market has been shrinking over the past few decades. Companies with an income of $100 million or less can no longer afford to promote and establish a new brand as others could 30 years ago. 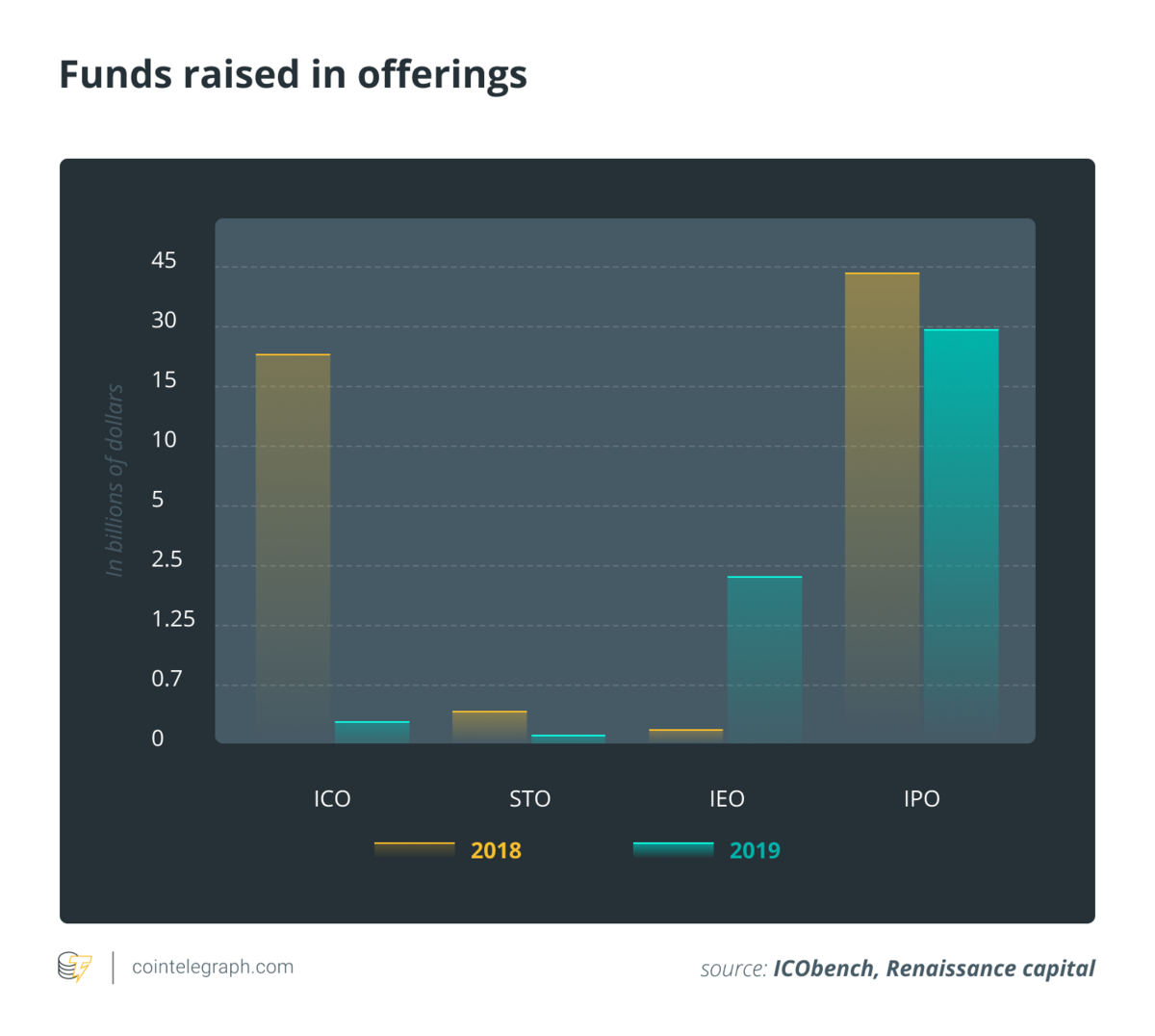 Notably, most IEOs are held by projects focused on trading and investing (over 70%), payments (about 9%) as well as commerce and the Internet of Things (IoT). Meanwhile, companies resort to STOs and ICOs to raise money for the development of products in markets such as mining, social network, marketplace, content management, data storage and AI.

According to the statistics, the number of investments attracted through IEOs from April 2019 to September 2019 comprised 5% of the amount attracted for the same period from IPOs. This is 50 times more than last year, equal to 0.001%. 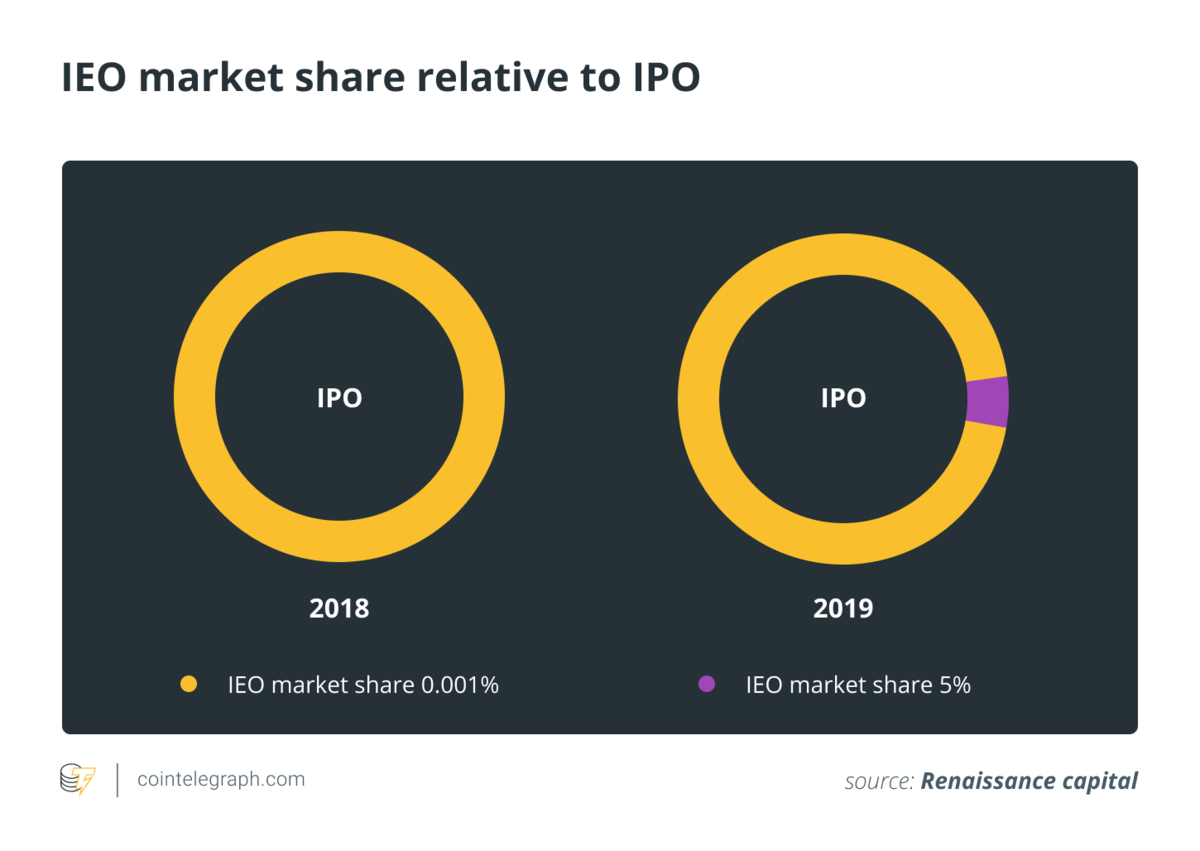 As analysts predict, with the advent of STEOs and multilaunchpad IEOs, the share of investments in IEO can become much larger, catching up with IPO market indicators.

Evan Luthra is a Forbes “Top 30 Under 30” tech entrepreneur and blockchain expert holding an honorary Ph.D. in decentralized and distributed systems. His companies, StartupStudio.online and iyoko.io, invest in and help build the companies of tomorrow. Evan is a featured speaker at various universities and conferences around the globe.