Altrader shares his first steps into the cryptocurrency world.

Firstly, given that I’ve had little actual trading experience, I decided to test how the stop orders work. I have bought 1 Lisk (LSK) and set a sell stop order. If the price grows, the order will execute itself at the preset value; the same will happen, if the price drops instead. That is really convenient, as I won’t have to constantly monitor the market.

For my portfolio, I have chosen some of the most volatile coins, whose average daily trading volume exceeds 100 BTC. From those cryptocurrencies, I will pick a specific group of pairs with prices that have little correlation to each other. For example, if we take the price graphs of ETH/BTC and REP/BTC, we can see that their price trends tend to move in step; whereas DCR/BTC and GNT/BTC may move in the same or the opposite directions at the same time.

I will buy at specific lines; I’ve got the idea from here. The goal is to find the peak of a rebound in case the trend keeps moving.

Just to show you an example, I made a test order according to my system on GNT/BTC.

First, I had to find a trend and trace a line along its rebounds. That line was going to be the level, the breakthrough. It would mean that there would a rebound of a larger scale than the ones that came before. 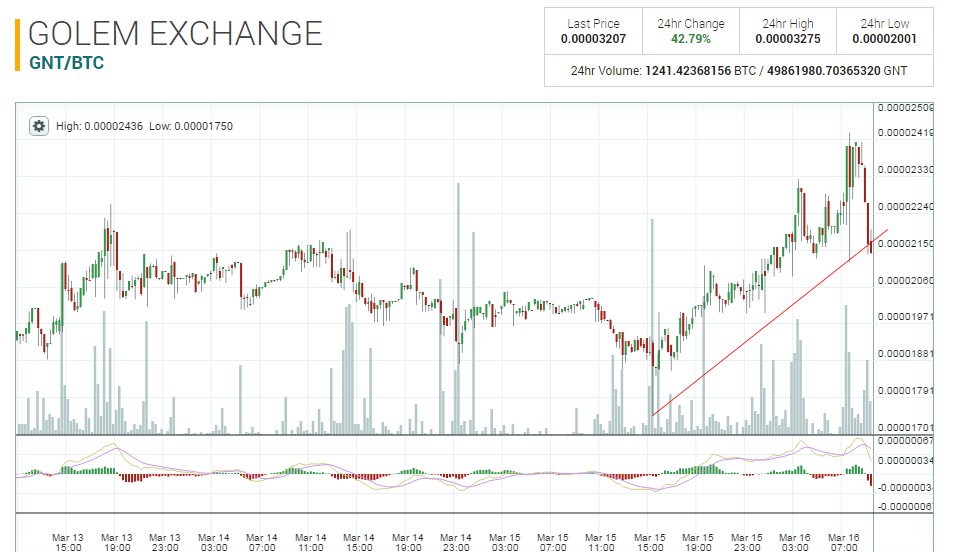 I found a short-term upward trend on GNT/BTC from 0.00001752 and traced a line along the latest, largest rebound. At that moment, the price broke through the diagonal channel. From what I know at this point, the market had two options: to build an upward trend of a larger scale or form a downward reversal. I placed an order at 0.00002159, expecting growth towards 0.000024, and had limited potential losses, placing a sell stop order at 0.00002037, in case the upward scenario stops. So the loss-profit ratio was 1:2.

The price went up, but I had closed my deal earlier, at 0.00002256. Couldn’t wait, could I? Nevertheless, the price practically reached the target.

I have chosen the following cryptocurrencies for trading and have defined their medium-term levels with the method described above:

I will mostly trend during daily hours so that the deals don’t stay up overnight. I will be buying one to three cryptocurrencies, whose trends do not correlate too much with each other. So the risk will constitute 0.5 percent to 1.5 percent of Bitcoin’s value and the profit targets will be twice as much. In other words, if a deal is unsuccessful, I will lose between 0.5 percent and 1.5 percent. But in case I make a right choice, the profit will be between one and three percent.

So here I am, starting my cryptocurrency trading path. Hope, it’ll be a successful one. Can’t wait to share my first results. Don’t forget to leave your comments, I may consider them as my next move.