Amid User Concerns, KuCoin Highlights That It Has Other Domains

After users in its Telegram channel expressed concerns about the lock placed on KuCoin’s website, the exchange shared that it has two other backup domains

2706 Total views
57 Total shares
Listen to article
0:00
News
Own this piece of crypto history
Collect this article as NFT

On the same day that Cointelegraph published an article detailing that KuCoin’s primary web domain was locked from being transferred to other owners, the crypto exchange has announced that its platform can be accessed through two additional domains globally — kucoin.io, and kubi.cc.

Anxieties flared on the exchange’s Telegram channel during the hours leading up to KuCoin’s announcement.

As followers questioned whether Singapore’s High Court had indeed issued an order against KuCoin, the channel’s administrators shunned their users’ questions — repeating that an announcement would be coming soon while refusing to give an estimated time for publication.

While requests mounted, KuCoin’s chatbot regularly interjected to remind that the channel’s most-active users would be rewarded with 5 Tether (USDT) each. 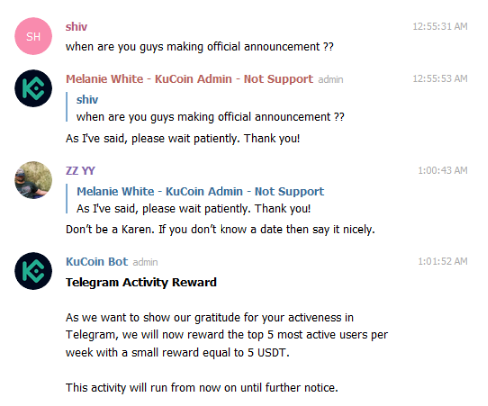 Upon its publication, the announcement ignited arguments between skeptics and loyalists on Kucoin’s Telegram channel.

Many users have expressed cynicism regarding KuCoin’s implication that the domain name through which the platform is accessed will have an impact on performance speeds, whereas others have unwaveringly stood by the exchange.

User ‘ZZ YY’ asked: “How does a domain name affect the speed[?] can’t wait for the official reply to this. Looks like it has been written in a rush.”

According to its announcement, KuCoin has introduced multiple domain names “to take care of the different network situations of global users and ensure users’ smooth access” to its platform.

The exchange claims it launched the domains several months ago, and will introduce additional domains to allow users situated across the globe to choose the fastest point of access available to them.

The exchange denies kucoin.com was locked in Singapore

The announcement comes shortly after Cointelegraph’s report that the Singapore High Court ordered domain registrar GoDaddy to lock kucoin.com, in order to prevent any change in its ownership.

The request was issued in a temporary injunction filed March 24 that prevents KuCoin from moving its assets out of Singapore.

An email from GoDaddy to KuCoin that was shared with Cointelegraph appears to confirm the lock placed on KuCoin’s domain — with the email indicating that the website has been locked in response to an order from the High Court of The Republic of Singapore.

Though they have not yet responded to Cointelegraph’s efforts to reach the company for comment, KuCoin described our reporting on the domain lock as “untrue.”

KuCoin suddenly underwent a drastic corporate restructuring one week before the injunction was filed and is now purportedly based in Seychelles. The firm is currently also the subject of two ongoing lawsuits.