As Ether Grinds Upward Past $200, These Signals Can Fuel ETH Price

Ether is posting higher lows against its Bitcoin pair in recent weeks, and this is a bullish sign for a possible breakout for ETH's price.

While the focus has been on Bitcoin's (BTC) price recently, it is slowly shifting toward different projects. There’s a straightforward reason for that: The halving has passed by, so the markets are reverting to their normal day-to-day fluctuations. Hence, altcoins can regain some more attention.

Based on that assumption, an analysis of Ethereum and its native token Ether (ETH), the second-biggest cryptocurrency by market capitalization, is warranted.

Ether facing heavy resistance between $215–$230 as next hurdle

While Bitcoin has been acting inside a range of post-halving, the same can be stated about Ether. The price of ETH has found support in the $168–$175 area, while the price is still unable to break through the upper barrier at $215–$230. 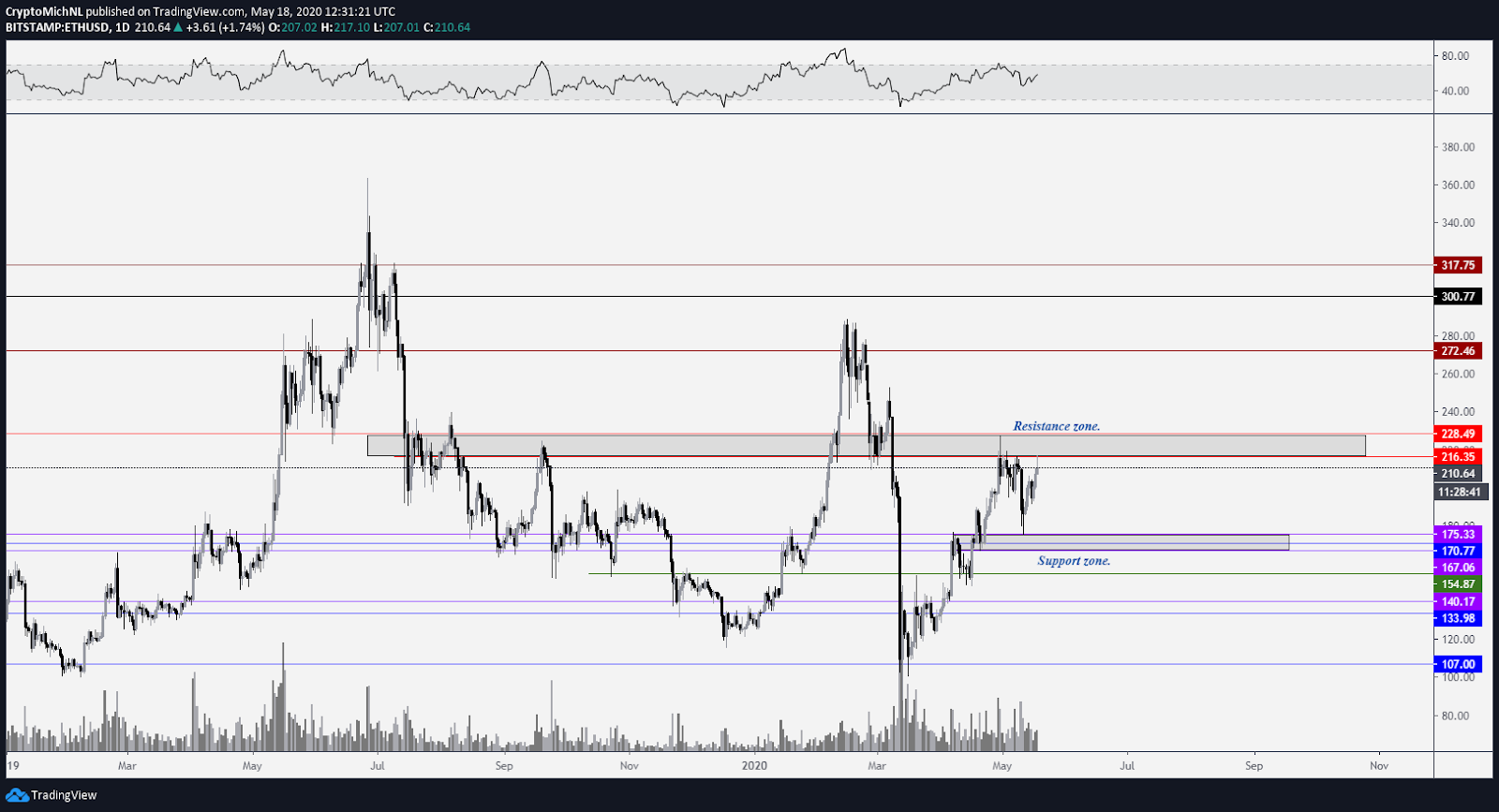 More remarkably, the price of Ether is heavily lagging behind the price of Bitcoin. BTC has rallied back to the highs of February, while Ether can’t provide the same strength and is still down 30% since then.

What does that say? Well, the focus has been on Bitcoin due to the halving. A heavy sell-off in altcoins occurred during the last push in BTC price (from $7,800 to $10,400) and the BTC–altcoin pairs were crushed with drops of 20% and 30%.

However, history tells us that Bitcoin almost always runs first. The peak of Bitcoin was reached in December 2017, while the altcoins made their all-time highs in the first quarter of 2018.

Thus, Bitcoin has to stabilize and calm down, after which altcoins can have a chance to catch up. And based on that, they can get momentum to reclaim their February levels, which for Ether is $270–$300.

The total market cap of cryptocurrencies is showing some impressive and significant indications of potential upward momentum. 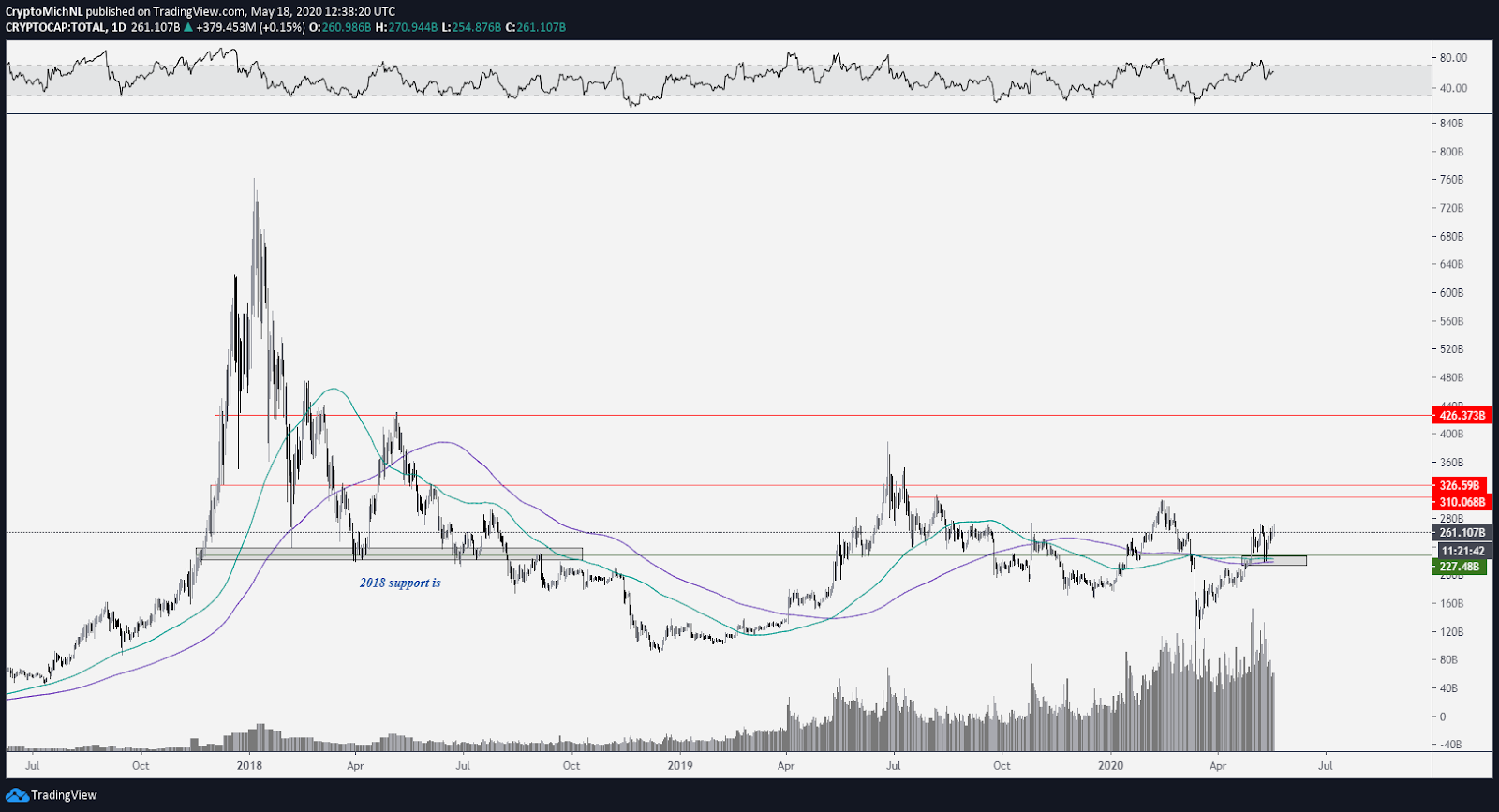 First of all, the total market cap is finally flipping the 2018 level for support again. That support level can be classified as the support for Bitcoin at $6,000. The price of BTC saw many bounces at that level in 2018 before the big crash occurred.

Based on that, the total market cap is lagging significantly behind, as the price of Bitcoin is currently at $9,600, which is 60% higher than this support. Conclusion: Altcoins are lagging.

Finally, the 100-day and 200-day moving averages on the daily timeframe are showing support, after which these MAs have confirmed support in the recent crash.

Why is this significant? 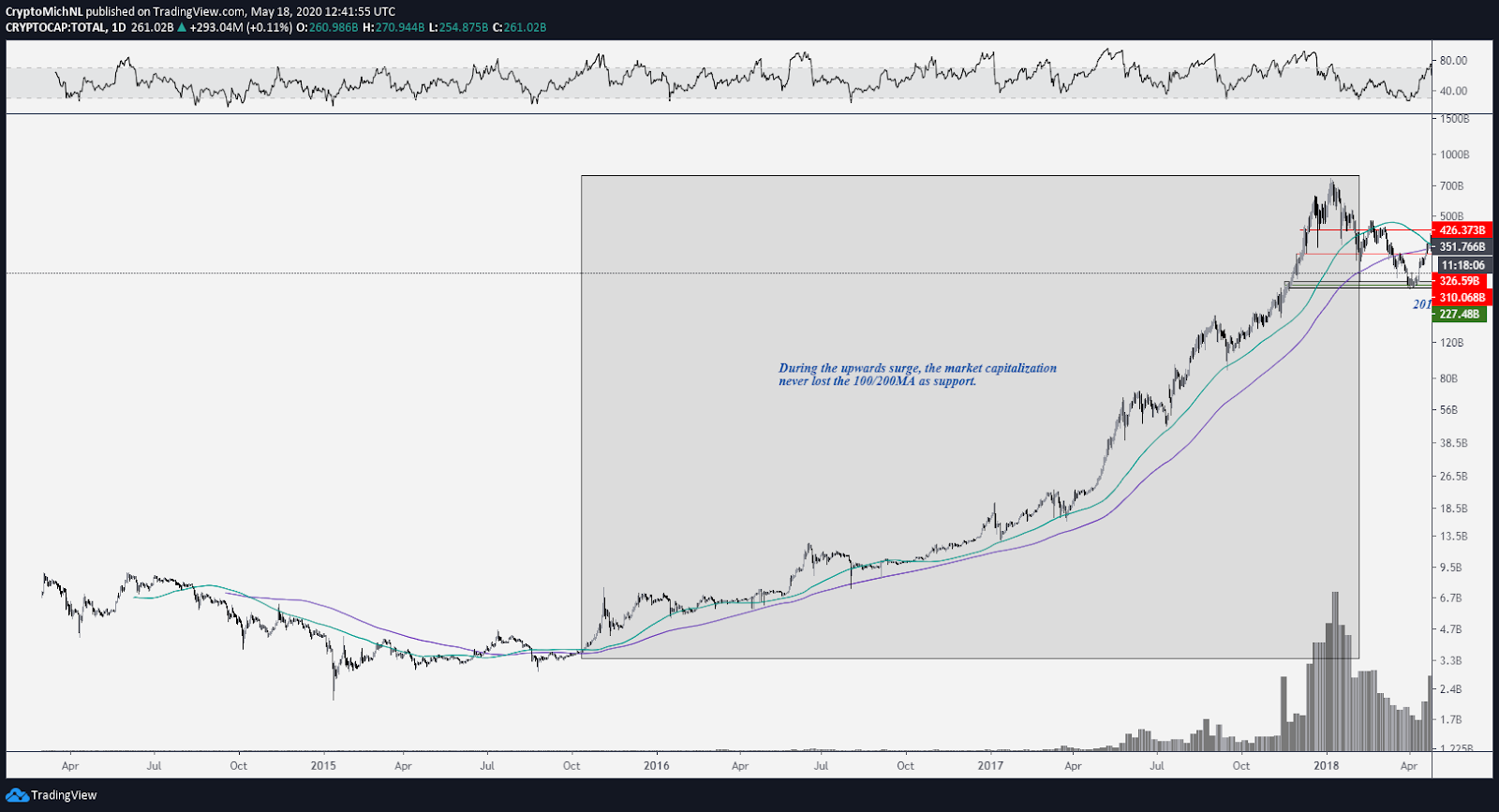 Holding and flipping these moving averages as support indicates strength and a potential trend shift. If the market cap loses these MAs, the market is back in bear territory. 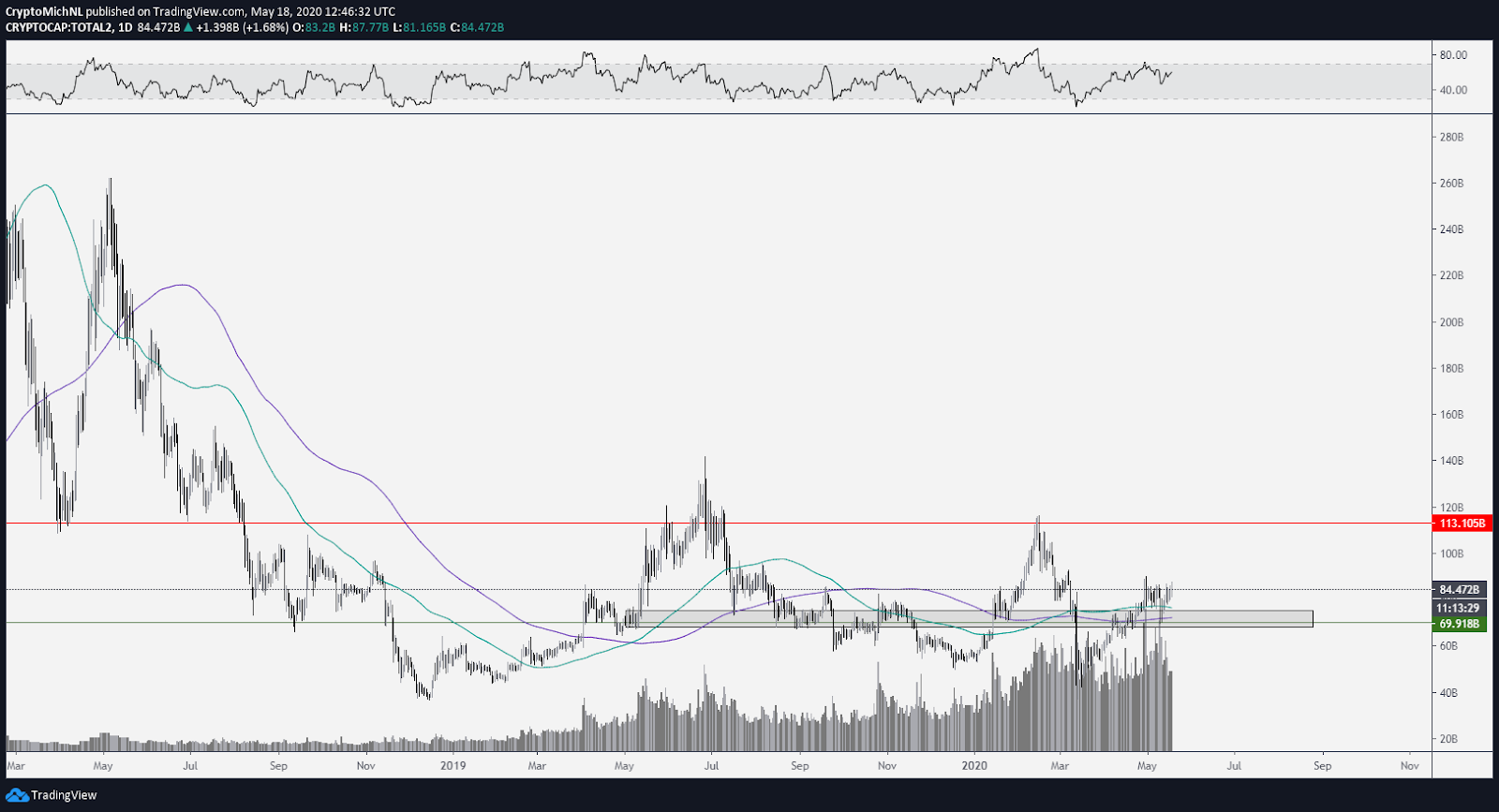 The total altcoin market cap shows a similar structure to the total market cap. Even more remarkably, the support of Bitcoin at $6,000 can be compared with the red horizontal line in this chart.

Through that, the conclusion is made that altcoins have been lagging heavily behind Bitcoin.

However, the altcoin market cap is also showing support on the 100-day and 200-day MA, while the $70 billion acts as support as well.

As long as these remain support, further momentum is expected toward $110–$120 billion.

What are the levels to watch for Ether? 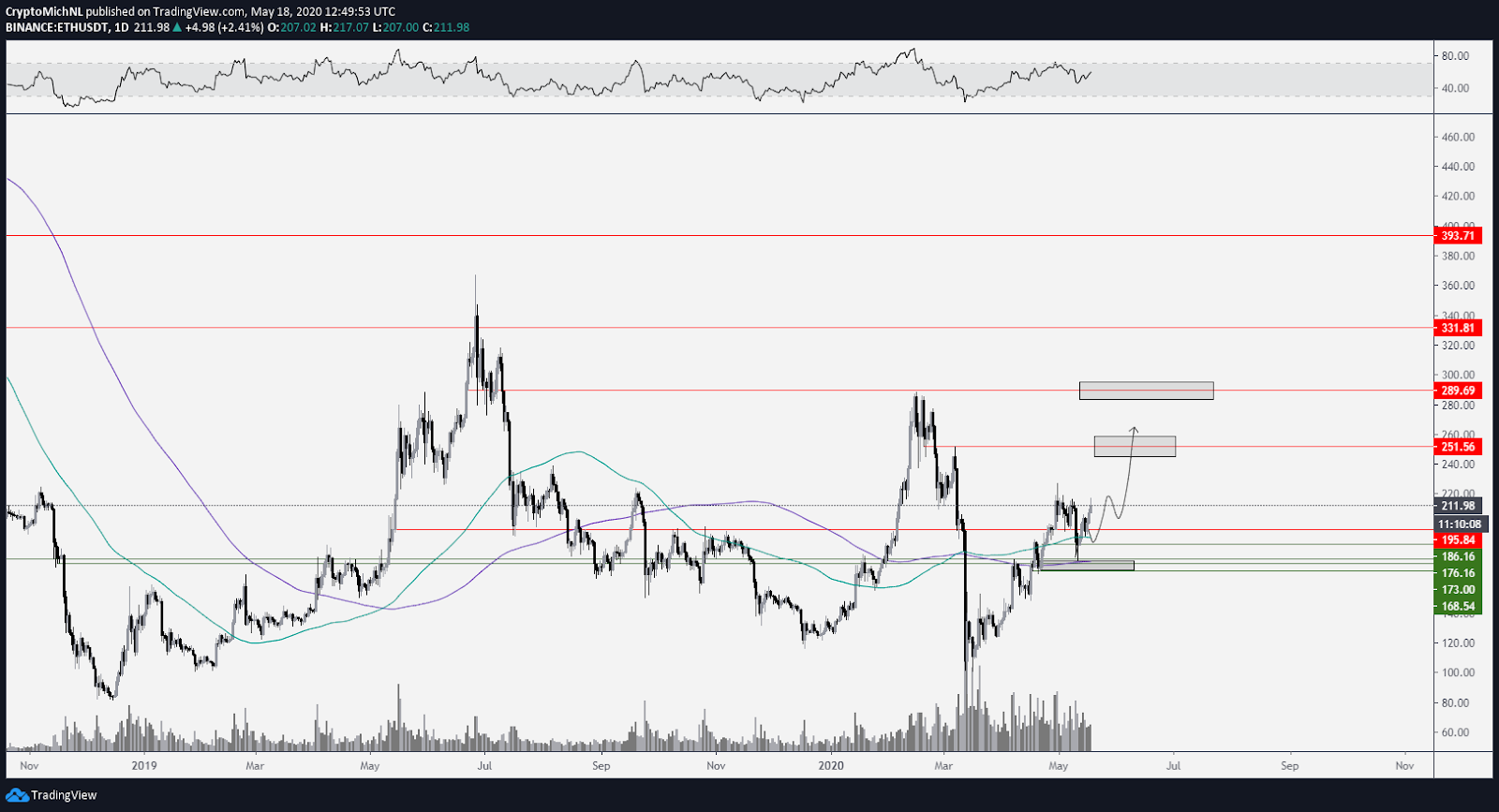 Just as the total market cap of crypto is showing support at the 100-day and 200-Day MA, the same can be stated for Ether's price.

As long as these MAs remain support, continuation is likely to be expected, and there are few reasons to become bearish, except for sentiment based on historical experience.

However, a flip of the $195 level can also be classified as a bullish support/resistance flip.

When either of these two levels becomes support, continuation is expected to occur for Ether.

What are the upward targets for ETH price?

However, the primary indicator would be whether Ether remains above the moving averages, as these are substantial indicators for bull/bear momentum. 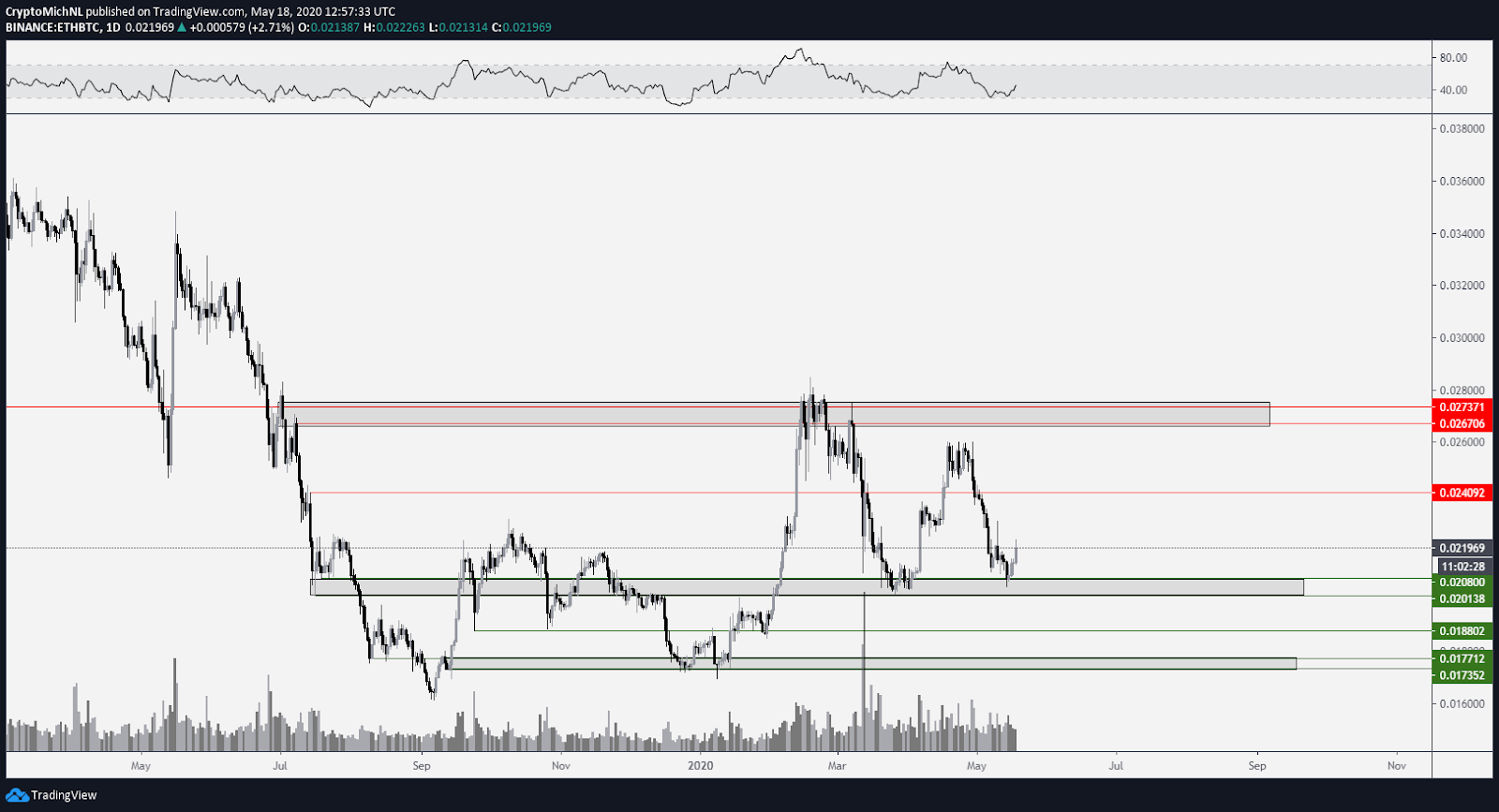 The BTC pair needs to show some strength. The price of Ether in the BTC pair is still hovering inside a range between 0.018 and 0.0275 sats.

However, the support at 0.021 sats is confirming support for a second time. What would traders and investors preferably want to see here? A new, higher high. The BTC pair of Ether is showing higher lows since September 2019, but no higher high has been made, however.

A confirmation of support at 0.021 sats is therefore needed to justify further momentum. The next step would be a clear move toward 0.024 sats and a breakthrough. If this rally happens, a new higher high above 0.0273 sats will be the next target.

Disclaimer: For such a move, Bitcoin volatility needs to remain calm. During the previous rally upward on Bitcoin (pre-halving), the BTC pair of Ether got crushed. Once the volatility diminishes for Bitcoin, only then can crypto coins like ETH have some free space to catch up.