More than half a year ago, I became the first citizen on the blockchain, which was the second pilot project of Bitcoin 2.0 platform Bitnation.

More than half a year ago, I became the first citizen on the blockchain, which was the second pilot project of Bitcoin 2.0 platform Bitnation. It was invented by Chris Ellis from World Crypto Network and Bitnation founder Susanne Tarkowski Tempelhof, who I met at a meetup last October.

Citizen of the blockchain

With a group of people from the meetup that could confirm my existence in time and space, we documented it with photos, signed it with PGP keys, time-stamped and hashed it, and put it on the blockchain. The PGP encryption and the blockchain make the ID secure. 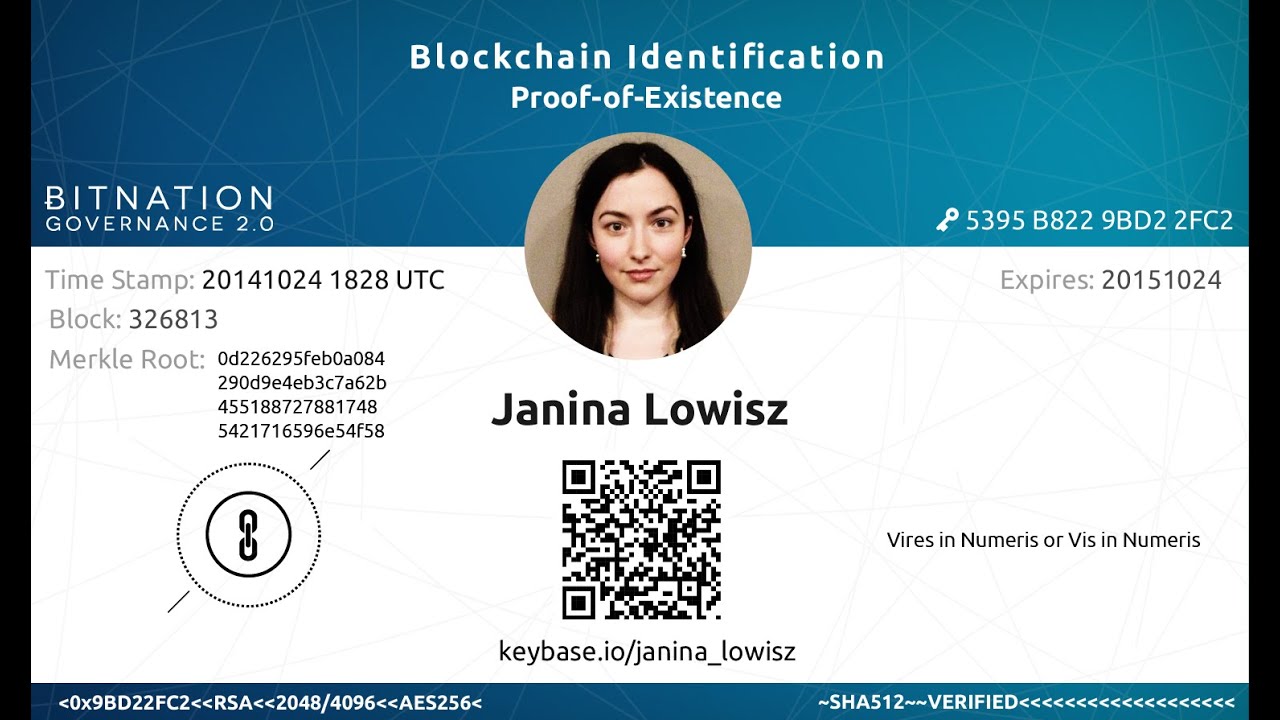 The event made me feel honored and also responsible to promote what is possible with the blockchain, such as providing infrastructure like land registry in developing countries, comparable to how MPesa enabled people to leapfrog banks. Therefore, a few weeks afterwards, I invented Blockchain Girl, which I use to spread everything from my interaction with the blockchain to whatever else I see as important.

People can create their own blockchain IDs themselves to mutually verify their existence. This is useful if you have some misgivings about being documented by the state or if it is not possible to do so in a normal way; for example, in war zones, for stateless people, when there is a lack of infrastructure, or - as it is up to you which data you include, like full name, address, photo etc. - for persecutes and refugees.

All tools are available and the steps of creating a blockchain ID are explained by Chris Ellis and at Bitnation`s Github. Everyone with an internet connection would have equal access to such transparent services on the blockchain, irrespective of the country they happen to be born in. The blockchain could be used to better organize libertarian or local communities like seasteading or the new Liberland state. The efficacy, accuracy and lower price to maintain this system can potentially disrupt traditional governments, similar to how Bitcoin is disrupting traditional finance.

Ideally, blockchain IDs would be voluntarily created by private individuals for low cost, so people everywhere could create and mutually sign their IDs. Instead of being backed by government, the ID’s strength would be based on the social network that supports it.

The blockchain ID will form the basis of the coming Bitnation-Blocknet-Horizon platform, Bitnation Pangea: When people register, they will get a blockchain ID and are part of a reputation system on the blockchain, comparable to Ebay. People will be able to have different accounts for different aspects of life, so they can have several blockchain IDs for work, travel etc. In the meantime, there has been another blockchain ID created to serve as the birth certificate for the founder’s nephew, “Blockchain Baby” Sion.

“My brother and I were born in the same country, to the same parents. Yet, we had different nationalities - and now - 30 years on - we still have different nationalities. It boggled my mind that these arbitrary lines drawn in the sand would dictate what rights we had in life. Hence, being able to create a birth certificate for my brother’s son, and my Godson, baby Sion, on the blockchain was a significant event - at last a solution that treats every person as equal, regardless for where in the world they’ve been born."

If you are further interested, you can look into the other blockchain projects at Github, see how the blockchain can be useful for your country, join our ambassador network, and meet me at the many blockchain related meetups in London.