Binance Hits Back at ‘Embezzlement’ Claim

Binance has rejected allegations that it misappropriated a user’s funds and provided screenshots to show it acted at the request of South Korean authorities.

Binance has fired back at claims that it ‘embezzled’ hundreds of thousands of dollars in funds that were frozen from a user’s account in November 2018.

In a lengthy statement the exchange said the funds were frozen at the request of South Korean law enforcement agencies because the account holder had allegedly received 3,995 Ethereum (ETH) through a listing fee scam. Binance provided screenshots of correspondence with the Korean authorities to back up its claims.

The user had earlier claimed South Korean law enforcement authorities had no complaints against him. Forklog reported that $251,194 worth of the seized crypto was totally unrelated to funds tied to the alleged listing scam.

“I have every reason to believe that Binance misappropriated my money for itself. Communication with them continues from November 21, 2018. It has been 18 months already,” the user told the publication.

The user claimed to be in contact with other Binance users who believe the exchange has wrongfully frozen their funds and they were preparing a class action lawsuit.

In its statement Binance said that a police report revealed an unidentified person had gained unauthorized access to a Korean cryptocurrency project's email account and learnt the project was in talks to list its project on exchanges:

“An unidentified person (the “suspect”) sent emails impersonating himself as a ‘Binance representative,’ promising to help list the victim’s cryptocurrency on Binance and other exchanges, for a fee. As a security deposit from the victim, the suspect received a remittance in cryptocurrency (ETH) of approximately 10 billion worth of KRW.”

A Korean law enforcement authority contacted Binance to say that its investigation had determined a user on the exchange had been identified as receiving a majority of the stolen funds. It requested the funds be transferred back to the victim on January 18, 2019.

“After we performed all necessary due diligence steps internally, Binance complied with the request from Korean law enforcement and completed the return of funds,” Binance said.

Binance said it had informed the user of Korean law enforcement’s request to repatriate the funds and provided him with contact information for the relevant agencies.

User is not happy

Binance states the user had made a complaint to a separate Ukrainian law enforcement agency, who contacted them in April 2019. Binance said it had been able to satisfy the agency it had acted appropriately.

The user claimed that South Korean police have refuted the exchange’s version of the story and provided unverified, translated documents purportedly detailing his interaction with Korean authorities to Forklog. 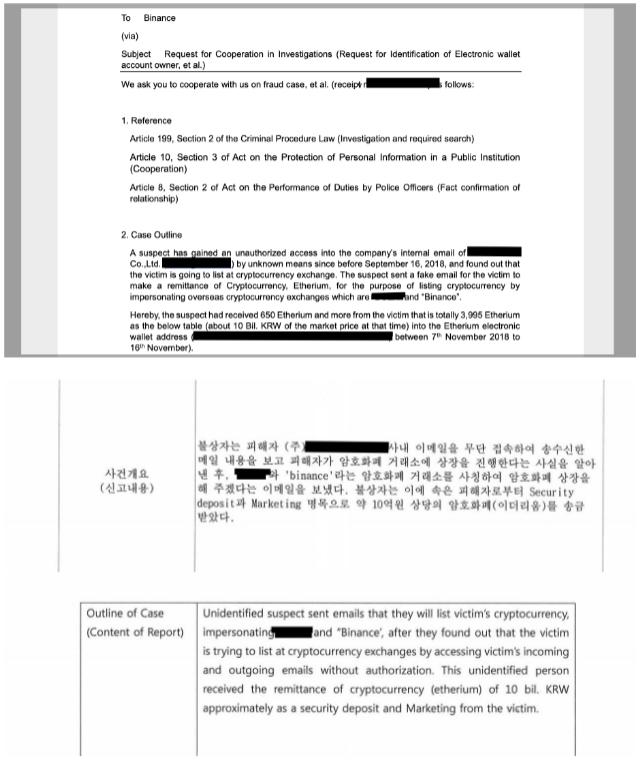