The Bank of International Settlements has released a contentious report on the future of Bitcoin’s use of the proof-of-work consensus.

4872 Total views
225 Total shares
Listen to article
0:00
Follow up
Own this piece of crypto history
Collect this article as NFT

A recent report from the Bank of International Settlements (BIS) has cast a spotlight on the efficacy and longevity of the proof-of-work (PoW) consensus and the future of Bitcoin.

The paper takes an in-depth look at how the Bitcoin protocol verifies payments using blockchain technology and various consensus algorithms.

PoW algorithms are a major point of discussion, with the author suggesting two major drawbacks. Firstly, the high cost of ensuring payment finality in a reasonable time frame, and the belief that PoW systems won’t produce adequate transaction fees to guarantee payment security in the long run.

It is a controversial and thought-provoking narrative, as it calls into question the future viability of Bitcoin as a transaction system and how it achieves payment finality through PoW.

The 31-page document goes into some technical detail, unpacking the nitty gritty aspects of the Bitcoin protocol, and how payments are validated and recorded on the blockchain.

With a big focus on the economics of Bitcoin, the author examines how Bitcoin creates an immutable record of payments via PoW and goes into great depth examining data tied to transaction fees and block rewards, as well as the future potential of this method.

In essence, the author suggests that a 51 percent attack by malicious miners is inherently profitable, using assumptions based on various economic considerations of Bitcoin mining.

The author notes that a successful attacker would gain double-spent coins, by transaction fees and block rewards:

“This makes an attack inherently more profitable than honest mining, unless there are strong disadvantages in terms of costs for short-term rentals, a price collapse following any double-spending, or deterrence through overarching coordination.”

The second major argument of the research paper is solely focused on mining income. The premise of this section is that mining income from fees is not adequate enough for miners to keep their equipment operational in the future.

Examining the way in which transaction fees fluctuate during different periods of time, it is suggested that the transaction market cannot produce enough income for miners to remain profitable.

This is due to the way in which transaction fees work in the Bitcoin protocol. Users can assign the transaction fee of any given payment on the network, and miners naturally look to include transactions with the highests fees in their mined block to maximize their earnings.

Nevertheless, some transactions are seen to be “free-riding,” as they may carry a small transaction fee but are bundled into a block — therefore not contributing to a positive economic environment for miners.

This is shown by the difference of transaction fees during periods of low and high transaction volumes.

Considering this, it is argued that miners have relied heavily on the value of Bitcoin block rewards, which are garnered by successfully mining a block and recording transactions — as examined below.

So, with these two considerations, the report predicts that liquidity is set to drop in the coming years, as there is less incentive for miners to actively maintain the Bitcoin blockchain. This could potentially lead to massive delays in payments being processed and confirmed.

The paper then goes on to explore various options that could address these concerns. Second-layer solutions like the Lightning Network are identified as potential answers to these problems.

Nevertheless, the paper essentially argues that Bitcoin needs to depart from the PoW consensus and adopt some sort of “social coordination or institutionalisation.”

How realistic are these assumptions?

While this research paper provides some interesting food for thought, some of its assumptions are based on a reality that will be realized only after a century from now.

Part of the writer’s argument assumes that once Bitcoin miners can no longer earn BTC rewards for unlocking a block, they won’t be able to make enough income on transaction fees alone.

In short, the Bitcoin mining process is what ensures that transactions are validated and recorded on the ever-expanding blockchain. Computers, known as miners, are required to solve a cryptographic algorithm in order to unlock a block, which is then used to store transactions.

The reward for doing this work comes in the form of transactions fees and a certain amount of Bitcoin, which is awarded to the miner who unlocks a block.

Bitcoin uses a PoW algorithm known as SHA-256, and it requires both time and electricity to solve. The system is programmed to become more difficult to solve as the mining pool grows.

The Bitcoin reward for mining a block also halves every 210,000 blocks and, as it stands, miners receive a 12.5 BTC reward for unlocking a new block. The next halving is predicted to occur in May 2020.

As Cointelegraph has previously reported, given that there are no changes to the protocol, the Bitcoin cap of 21 million tokens will be reached by the year 2140, 121 years from now.

Thus, the argument put forward by the author that Bitcoin payments would take months once the block rewards hit zero holds no real relevance for the next 100 years, at least. However, as mentioned in the report, the development of the Lightning Network could very well answer the scaling and speed issues of transaction validation.

Crypto industry investor Anthony Pompliano wasn’t convinced that the BIS report paints an accurate prediction of how the mining ecosystem and Bitcoin could change:

“The more FUD that is published by legacy financial institutions, the more bullish I become. Bitcoin definitely has risks and challenges ahead, but this report does not give an accurate representation of them.”

While he may not agree with the outcomes given, Pompliano believes that the Lightning Network could well be the second-layer application that answers some of Bitcoin’s teething problems:

“The Lightning Network growth and adoption has been incredible. It is probably one of the fastest-growing products in crypto, which leads me to believe it has an increased probability of being the scaling solution of the future.”

While the paper hints at the possible shortcomings of Bitcoin, the preeminent cryptocurrency has proven itself through many trials over the last 10 years.

That is not to say that it hasn’t had its fair share of problems, which are documented in the BIS report. However, there has never been a successful 51 percent attack on Bitcoin.

Data from Blockchain.com shows the major mining pools that dominate the hashrate distribution of Bitcoin. Should enough of these pools combine their resources, it would — in theory — be possible to have a majority of the hashrate and begin a dominant blockchain that is not honest. 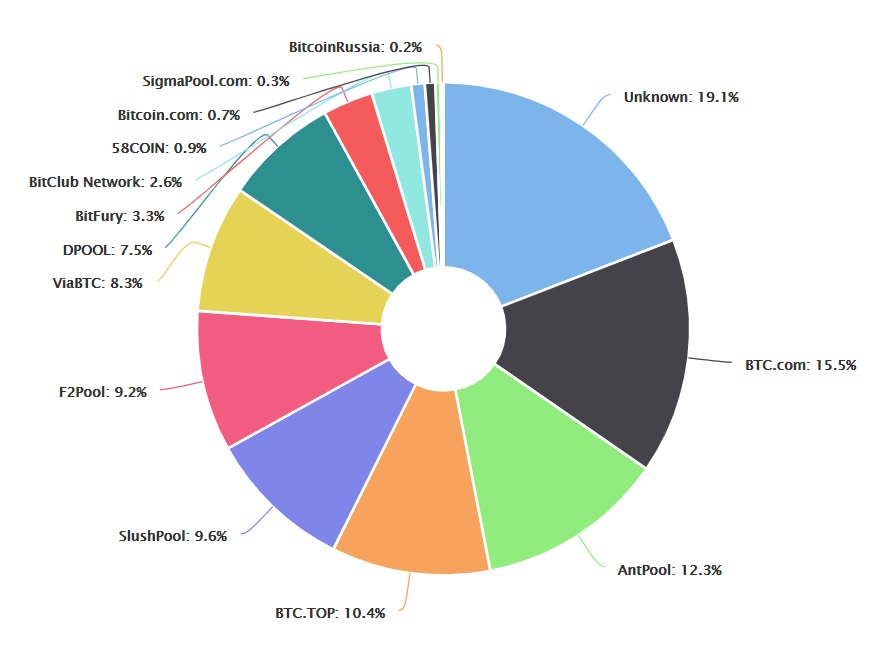 We need only look at the recent, successful 51 percent attack on the Ethereum Classic blockchain that grabbed headlines this month.

This serves as a reminder that honest miners need to make up the bulk of the Bitcoin ecosystem for it to function as a truly decentralized cryptocurrency.

The BIS report also suggests that the future of Bitcoin’s success and longevity could lie in the use of some sort of centralized system. As Pompliano says, this narrative seems to be a disruptive tactic by mainstream institutions that are resistant to the challenging nature of decentralized cryptocurrency:

“I wish legacy financial institutions would spend their time and resources to accelerate these innovations, but they won’t. This is what slow disruption looks like.”