Bitcoin Price Consolidating But What Happens if $9K Support Is Lost?

Several signs are pointing to a new bear market for Bitcoin as mining chip manufacturers are feeling the pinch from the halving and the global economic downturn.

Bitcoin (BTC) has failed to challenge the multi-year resistance of $10,500 since the beginning of June 2020. This extended period of chop will ultimately result in one of two inevitable outcomes.

Either a massive green candle to catch bears off guard or a period of profit-taking that will see the leading digital crypto-asset fall to sub $8K levels in the coming weeks.

But what signs can we look out for to determine which direction the largest cryptocurrency by market capitalization will go? 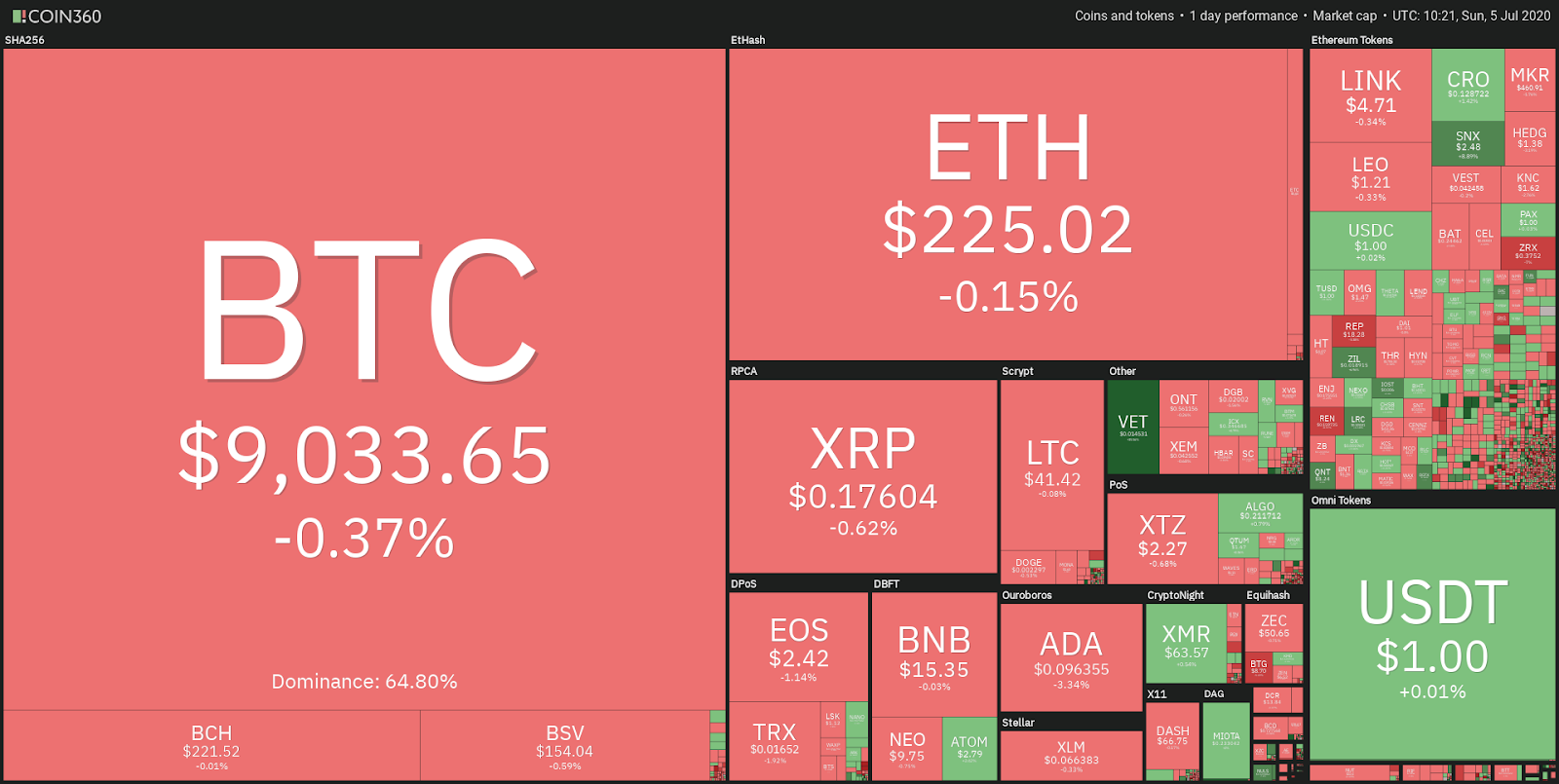 Using the Moving Average Divergence Convergence (MACD) indicator, which on the weekly chart has historically proven to be an incredibly accurate indicator for buying and selling Bitcoin, you can see that the blue MACD line is starting to point down toward the orange signal line.

Whenever the weekly MACD does this, it signals to investors and traders to either sell or short. In the early history of Bitcoin, both bullish MACD crosses (when the blue MACD line crosses up through the orange signal line) and bearish MACD crosses (what we’re seeing now) were infrequent — they would occur once a year maybe twice. 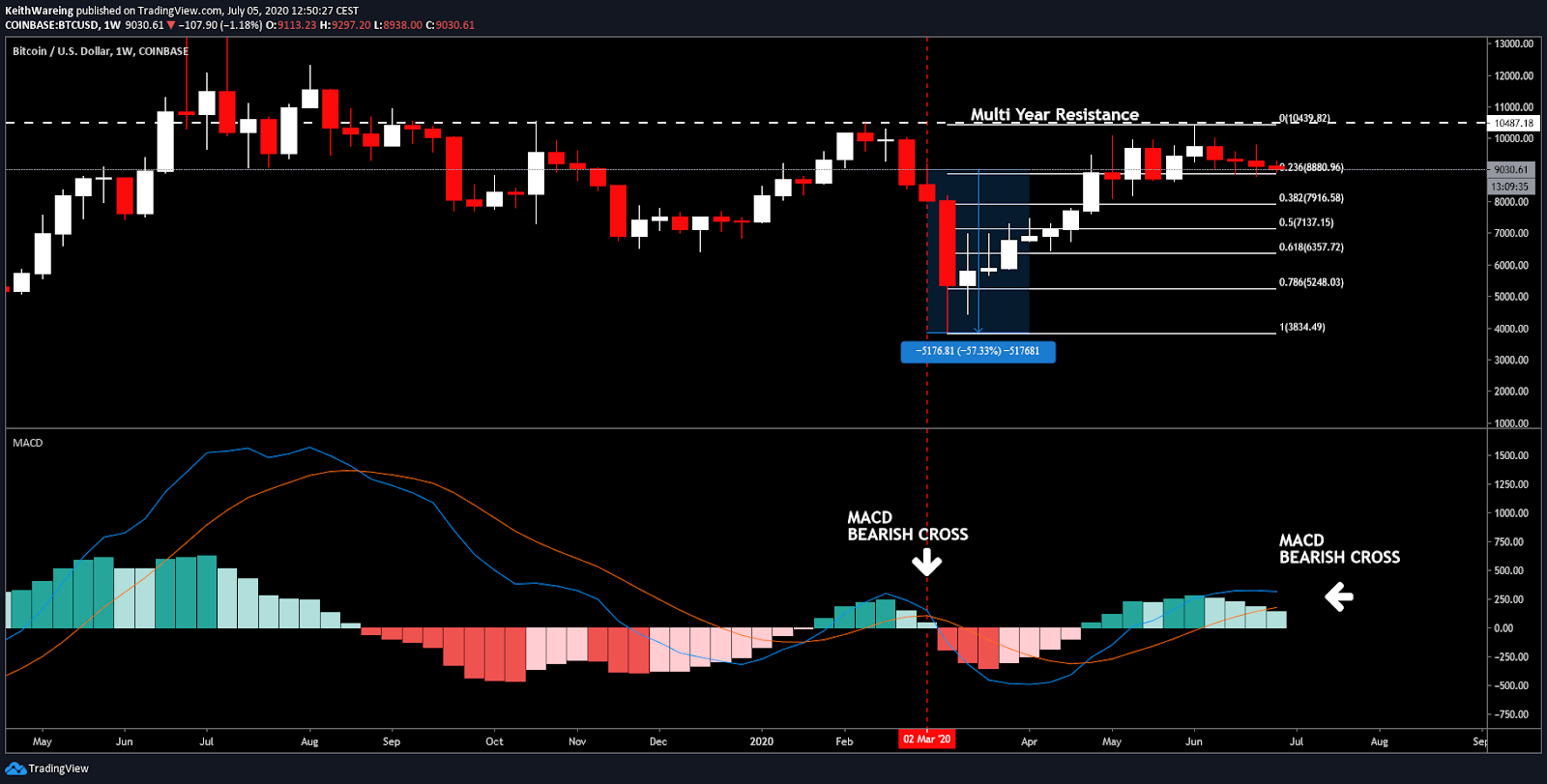 However, in the last 18 months, they crossed nine times, that’s once every two months on average since the beginning of the 2018 bear market.

The last time Bitcoin crossed bearish on the MACD there was a whopping 57% decline in the price of Bitcoin almost immediately after they crossed. So are we in store for yet another pullback? According to the Fibonacci levels, this could put downside targets anywhere between $7,916 and $3,850. 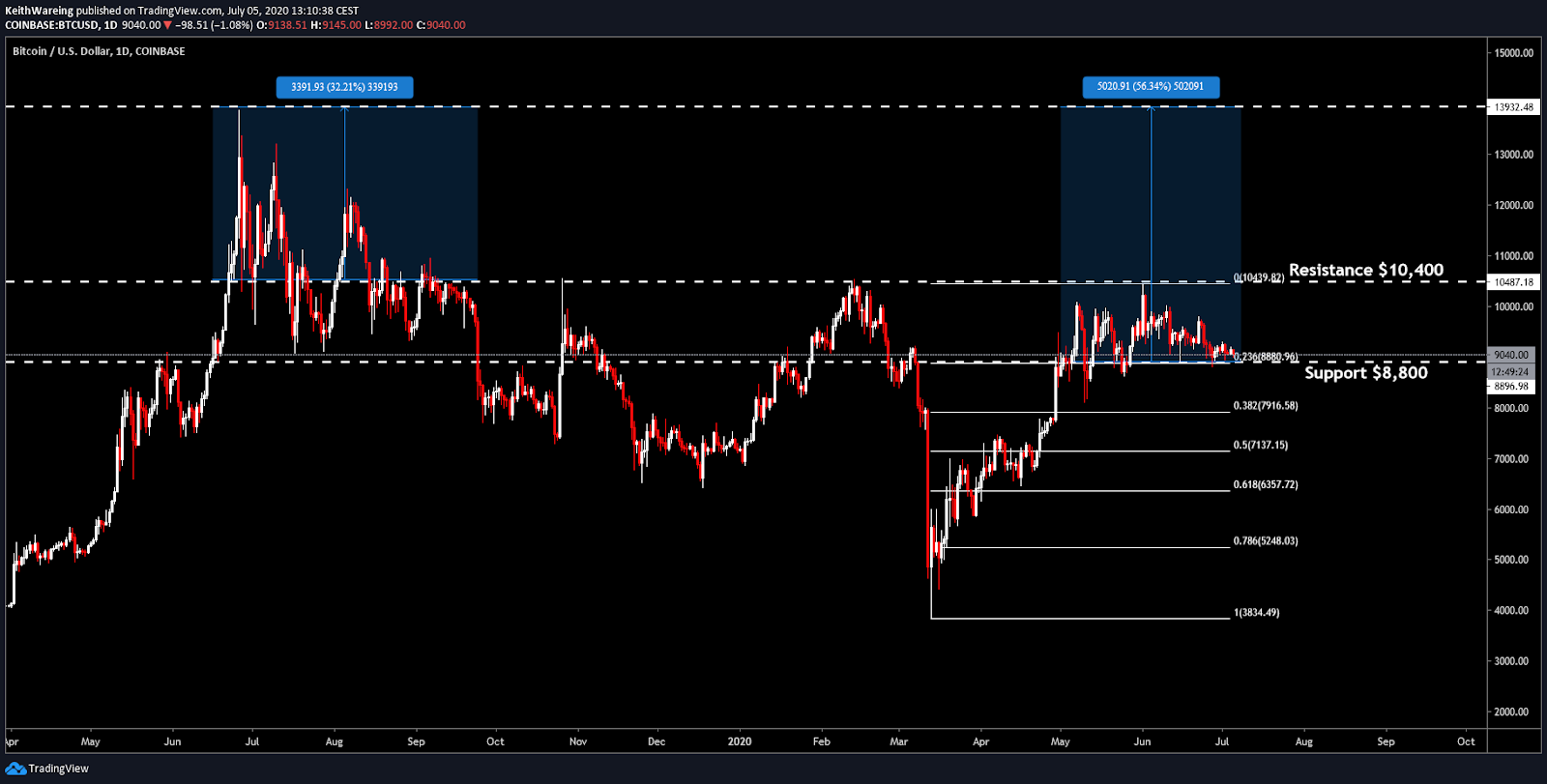 On the daily chart, things are not much clearer. It’s evident from the chart that $10,400 is the resistance and $8,800 is the support. How long this range continues is anyone's guess.

However, the last time Bitcoin broke through this level, the price soared by a further 32.2%, at which point $10,400 became support several times before eventually continuing its downtrend.

Right now, Bitcoin is dangerously close to the support level, which happens to be the 236 Fib.  Losing this level opens up $7,900 as the first downside target.

Conversely, should the bulls take control and push past the $10,400 resistance level, the upside from the current price of $9,040 is a staggering 56%. Quite the trade if you can pull it off, but one that first needs to wait for confirmation, and this could take not weeks, but months to play out. 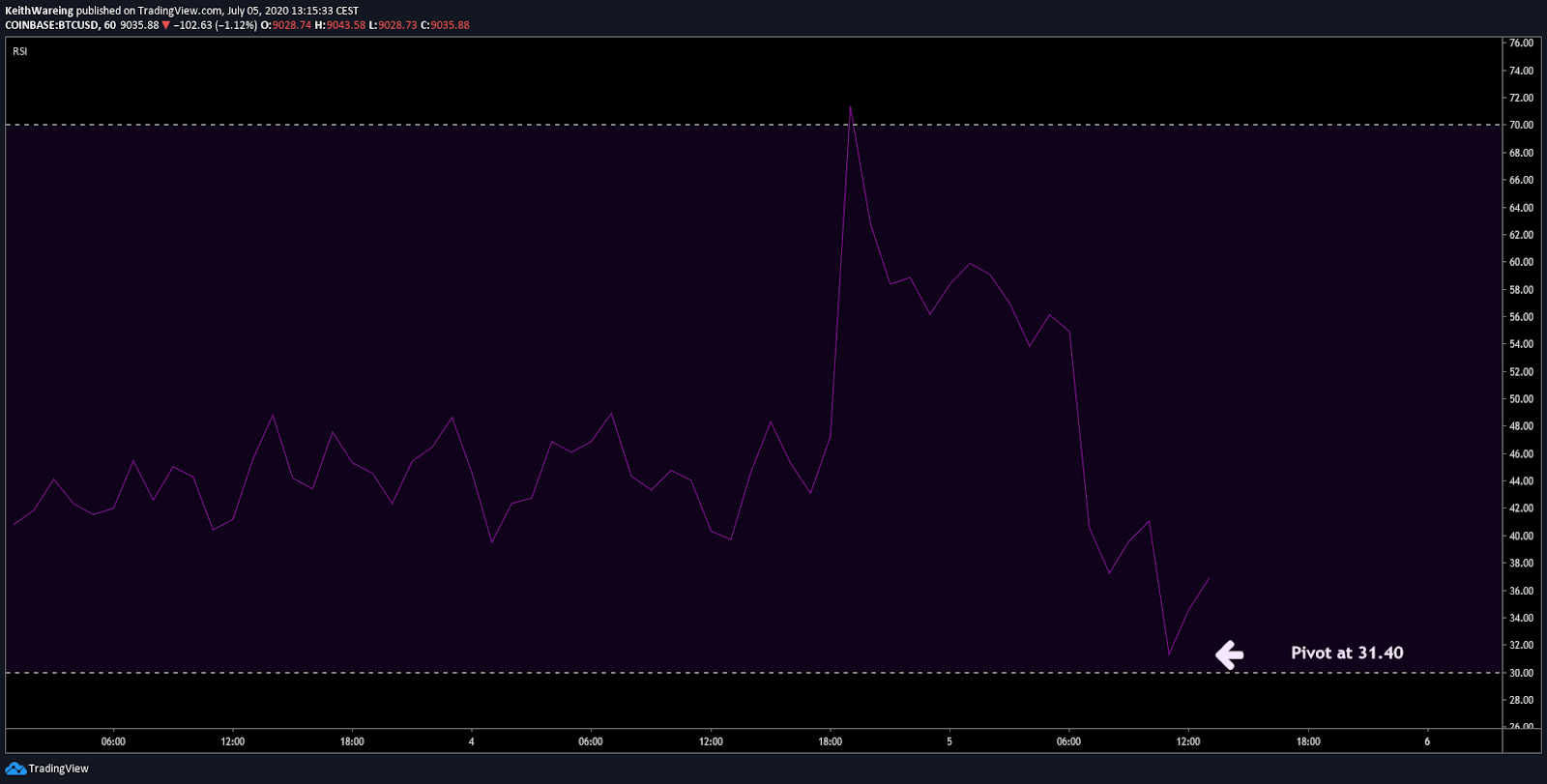 On a more positive note, the 1-hour relative strength index (RSI) indicator shows that buyers stepped in as it approached oversold territory around 31.40.  Keep in mind, that anything below 30 is considered a strong buy signal.

However, on the higher time frames between the 12h and monthly charts, the RSI is very much in the middle, providing no clue as to which way the market is going to go. Either the bulls will take charge and push up BTC price 50% or the bears will drive the price down by an equal percentage.

There is quite literally nothing on the charts that can give an indication with the exception of the bearish MACD. However, sideways action can cause the MACD to cross if it lasts long enough. 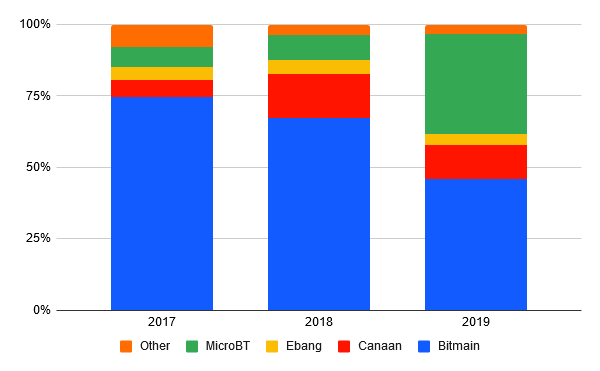 In a recent report published on the Bitmex Blog entitled “Battle for Asic Supremacy,” you can see that the previous leaders in ASIC production such as Bitmain are losing their dominance. Having once occupied a 75% market share, new stars like MicroBT are fast becoming the new dominant force in this space.

But with mining rewards recently being halved, this particular industry looks somewhat like a financial black hole. For example, Canaan’s share prices tanked by nearly 50% shortly after a $90m IPO last year, and relative newcomers Ebang are seemingly desperate for cash after having their Hong Kong IPO rejected in 2018. Now, these firms are seeking a cash injection on United States’ soil after recently filing for a U.S.-based IPO in April 2020.

The unsurprising lack of financial interest in these companies will almost certainly be playing a role in the current price of Bitcoin.

The question this leaves me with is this: “if no one is making any money from Bitcoin, what happens next?” Is this a bullish or bearish thing? To me, the answer seems obvious, it comes across as very bearish. 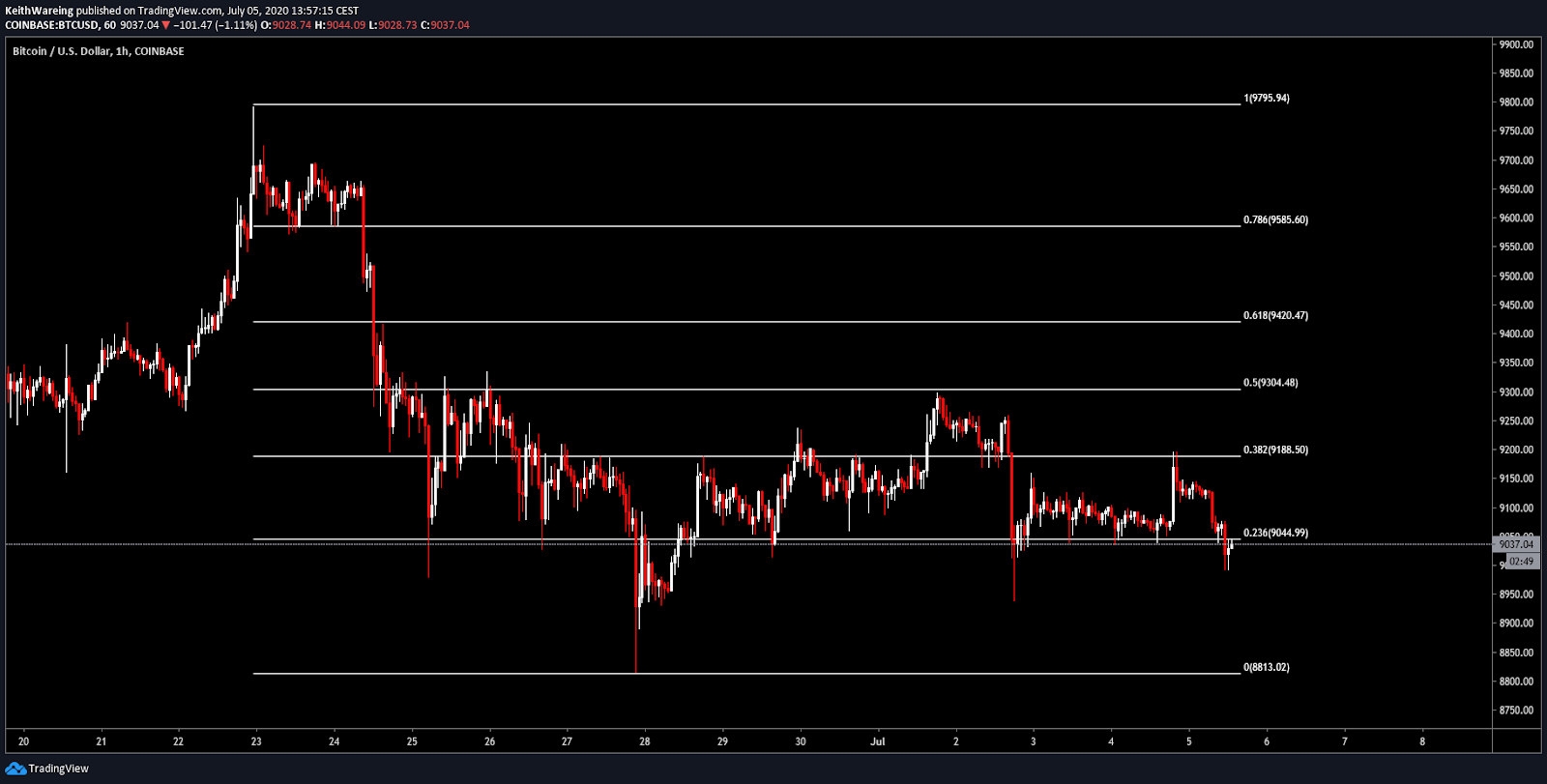 Using the same chart and Fib levels, $8,800 is where the first level of support will be found.  Losing this level at this stage of the game would open up the 382 on the daily chart, which sits around $7,600.