Bitcoin wallet and trading platforms are experiencing an explosive growth in their user bases. In June, Coinbase added one million new users, demonstrating a massive increase in its user base. 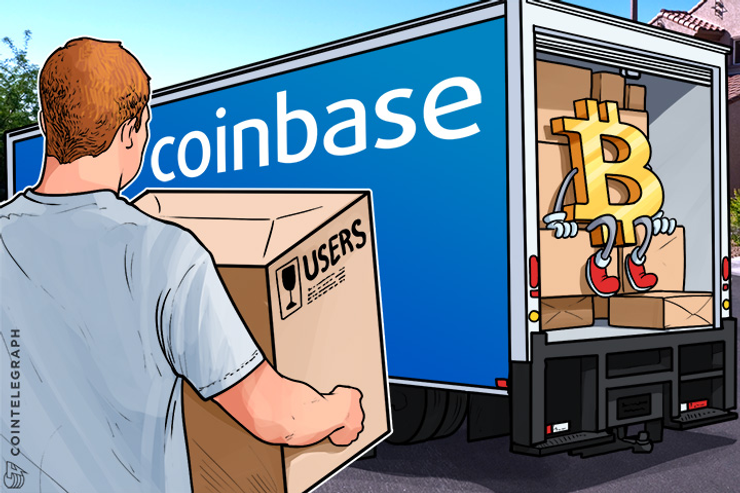 Bitcoin wallet and trading platforms are experiencing an explosive growth in their user bases. In June, Coinbase added one mln new users, demonstrating a massive increase in its user base in a relatively short period of time.

Alistair Milne, Bitcoin investor and analyst at Altana Digital Currency Fund, recently revealed a growth chart of Coinbase’s user base dating back to November of 2016. From May to June, Coinbase added approximately one mln new users and in the past 18 months, Coinbase added more than four mln users.

Coinbase has added approx 1million new users in 30 days
The rate of growth does not appear to be slowing down#bitcoin pic.twitter.com/6EhG7p91Hx

Milne’s chart above shows the growth in the number of Coinbase users, not wallets. At the time of reporting, Coinbase oversees 27.5 mln wallets, more than leading Bitcoin wallet service provider Blockchain. Apart from that, Coinbase supports 46,000 Bitcoin merchants and 10,000 developer apps.

At the moment, Coinbase is the largest Bitcoin wallet platform in the market and operates around 12.5 mln more wallets than Blockchain.

“The pace of innovation in the digital currency space is unmatched. We were impressed by Blockchain’s consistent market traction and dedication to building secure financial products for an increasing number of users.”

Around the same time Blockchain secured its $40 mln funding round, various sources including the Wall Street Journal revealed that Coinbase is set to raise a $100 mln funding round at a $1 bln valuation from a group of widely recognized investors.

At one point, Coinbase was valued at one-tenth of the market cap of Bitcoin and has consistently been the largest Bitcoin wallet platform since then. With its digital currency trading platform GDAX, Coinbase is also trying to secure dominance over the cryptocurrency exchange market.

Attracting investors into the crypto market

Adam White, the vice president of GDAX, explained that the recent bailout of Ethereum traders on the GDAX platform after a flash crash was also a difficult decision the company approved to sustain its long-term ambition to become the leading digital currency exchange in the world to serve both professional traders and institutional investors

“Our long-term ambition, however, is to be a leader among all exchange platforms and we are committed to serving as the most trusted provider to the world’s largest institutions and professional traders. We are confident that all trades this week were executed properly, however, some customers did not receive the quality of service we strive to provide and we want to do better.”

The Bitcoin industry and cryptocurrency exchange market are growing at an exponential rate. Companies such as Coinbase and Blockchain are at the forefront of the cryptocurrency sector’s growth, attracting investors into the market.