Bitcoin Volatility Hits 2018 Lows but Is a Repeat 42% Drop Possible?

Traders remain cautious as Bitcoin’s current lack of volatility is similar to November 2018 when low trading volume resulted in a 42% drop.

At the start of this week, Bitcoin’s (BTC) volatility, or the average daily oscillation, dropped to its lowest level since November 2018 (when the infamous $6,000 support finally broke).

Prior to today’s mild breakout to $9,437, the last significant move above 1% was on July 9 when the price dropped 2.1%. Generally, Bitcoin price has been trading in a tightening range for the past month so today’s move above the $9,400 resistance isn’t much of a deviation from the 30-day trading range.

The last time Bitcoin showed similar price action was on October 30, 2018, when Bitcoin started an impressive 15 consecutive days of movements without a 1.5% oscillation. On November 14, 2018, this all changed as volatility spiked and led to a 42% crash to $3,650 in less than two weeks. 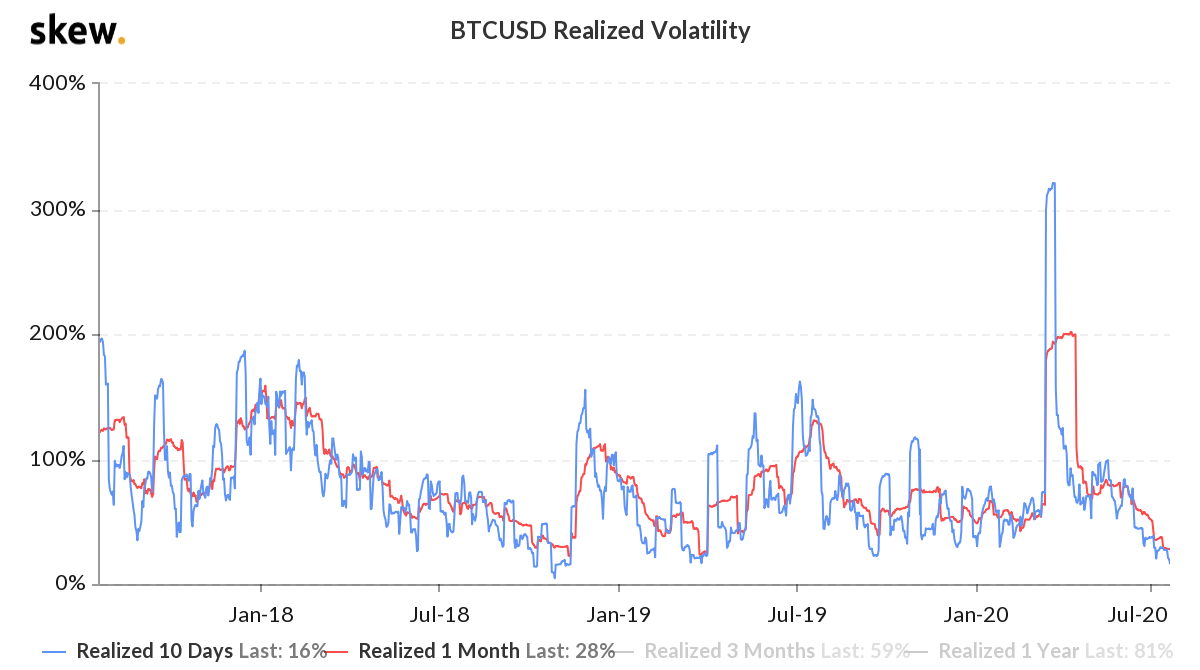 The above chart shows that the 10-day and 30-day historical volatility, which drastically reduced over the last three months. There’s no real explanation for such market behavior, although it’s not uncommon to see similar price action in traditional markets like oil, gold, and the S&P 500.

Reduced historical volatility by itself can’t be deemed bullish nor bearish because it only states that past movements have been rather narrow. On the other hand, sudden significant moves tend to be preceded by stable periods.

Such a narrow range trading is also known as a consolidation period and it tends to end with a sharp support/resistance break. This is due to the conflict between short-term traders betting on range continuation, while others exact the opposite.

When the market starts trading within a tight range, leveraged traders betting on range continuation will tend to get liquidated in case of a breakout.

Meanwhile there’s usually some active orders waiting for a trend rupture that are placed just outside the range. This price action exacerbates this effect, although sometimes it isn’t strong enough to break the pattern.

The above chart depicts a perfect example of a $275 downtrend channel and its upper resistance being tested. Although there’s no clear rule for setting such a strategy, traders will usually seek the longer and narrower trading range.

There might be a newer positive trend that formed on June 16 but the previous trend seems to be displaying more strength, at least for now.

Traders are now wondering if the current situation will repeat the November 2018 crash? Looking at volatility alone, this is impossible to predict but for now investors seem content to profit from altcoins.

Even today’s upside move to $9,437 hasn’t removed BTC price from its recent range and it's crucial to see the price flip the $9,400 level to support by the daily close.