Bitcoin traders were waiting to hear just the words Department of Justice representatives offered up. 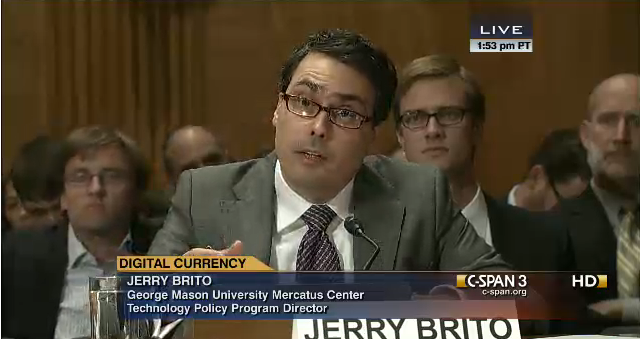 Bitcoin traders were waiting to hear just the words Department of Justice representatives offered up.

When the DOJ told a Senate committee that Bitcoin constitutes a “legal means of exchanges,” prices surged. One BTC commanded $744 on the Bitstamp exchange, and prices flirted with the $900 mark on Mt. Gox.

Bitcoin prices have increased more than 40-fold this year.

Much of that has been brought on by an increasing level of interest from China, where a liquid, unregulated currency is seen as an attractive investment by citizens who have trouble even getting their national currency across the border. A third of all Bitcoin trades take place in China, and the country is home to the world’s largest exchange by volume and user base, BTC China.

In fact, as the Senate heard testimony, BTC China was securing a $2 million round of Series A funding.

"We all recognize that virtual currencies, in and of themselves, are not illegal," said Mythili Raman, from the Department of Justice. "We are nimble enough and aggressive enough to be able to combat the threat.”

Speculation has driven much of the currency’s value, as well, said Exante Ltd. co-founder Vladimir Maslyakov, whose company has established an investment fund with Bitcoins. Maslyakov’s fund holds some 60,000 Bitcoins and is awaiting a green light from federal regulators to seek investors.

Bitcoin Foundation representative Patrick Murck warned that things are still not yet stable. “It’s very much an experimental currency and should be considered a high-risk environment,” he said.

Still, the currency has begun to attract big-name investors.

The Winklevoss twins, for example, hold about 100,000 Bitcoins and are very publicly bullish on the currency.

“We are now seeing the principals of Wall Street firms and funds investing their own funds into Bitcoin,” Silbert said.

Before wider adoption is possible, though, the currency needs to stabilize, say analysts. Wild swings such as the one right after the Senate hearing are a double-edged sword.

But the tepid votes of confidence before Congress are a step in that direction. Bitcoin is making inroads into the mainstream. Recently, one pool table manufacturer installed a Bitcoin payment processor in its pool tables for players who have run out of quarters.

And up in Vancouver, the first Bitcoin ATM was installed at a local coffee shop.