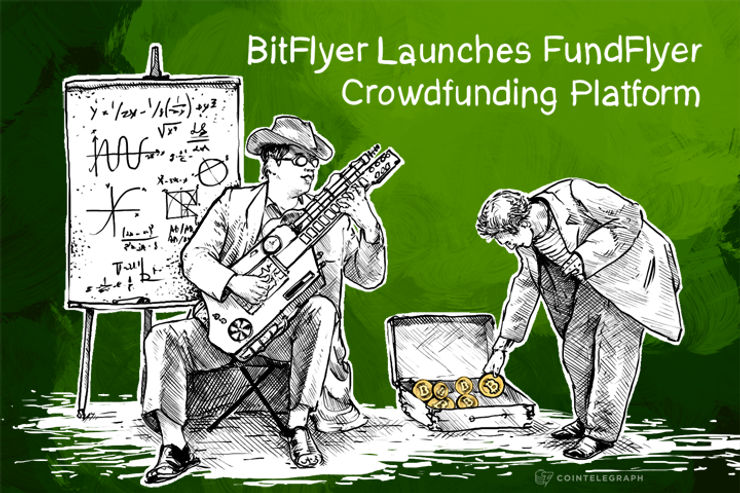 BitFlyer has launched Japan’s first “Post Mt. Gox” exchange in April of 2014. Japan is one of the world’s largest economies and from February to April they were forced to shop overseas for Bitcoin. BitFlyer was soon followed by others, including Quoine, which is aimed more at professional traders. In contrast, BitFlyer wants to target a more general consumer market, especially newcomers to cryptocurrency trading. This story is more about its latest venture however, a crowdfunding platform called FundFlyer. The announcement comes just about one month after bitFlyer said that it had raised more than a $1.6 million and was in the market for a new venture, one that would give them more of an international reach.

FundFlyer will be integrated into the bitFlyer platform as part of it feature list. Set up in a similar fashion to other more well-known crowdfunding sources such as the familiar “Kickstarter”. Japan has its own crowdfunding platform called Shooting Star but it is fiat currency only. FundFlyer however wants to move Bitcoin into the Japanese mainstream first through crowdfunding and then move out internationally.

These models have different project categories such as events, the arts, software development, community disaster relief and many others, including political activity. bitFlyer plans to use the new platform to build long lasting community institutions. Project managers are able to set both gift levels and funding goals and the project only pays 10% of the total to fundFlyer and there is currently an introductory offer of 0% usage fees. Projects are only paid if they reach their targets and are payable in either Bitcoins or fiat currencies and if the project fails to reach its goals all funds are returned to those who donated.

The service is certainly starting off on the right foot with its first project being for the head of the Japanese government’s IT Strategy Committee, Mineyuki Fukuda. Fukuda has experience with crowdsourcing because of his fiat currency-based crowdfunding project. He is joined by CEO Yuzo Kano, who formally traded with Goldman Sachs and Takafumi Komiyama, CTO and an office staff of fourteen. Fukuda’s project has already raised 1.443 BTC of its 4 BTC goal with three days remaining in the program.

The Japanese government has been stoically silent about Bitcoin and cryptocurrencies even going as far as to state:

“We’re in charge of money. If it’s not money, it’s not the Ministry of Finance/Financial Services Authority’s jurisdiction.”

The bitFlyer exchange is completely compliant with the Japanese “know your customer” (KYC) regulations that financial institutions in Japan are required to follow which includes regulated prices and payment of consumption taxes, which were recently raised 3%. This early jump will be helpful because the Japanese tax authorities are expected to pay consumption taxes on any Bitcoin not acquired in Japan.