With 560 attendees, 26 exhibitors, and 26 speakers, Blockshow 2017 became the largest international Blockchain-related event ever organized in Europe. 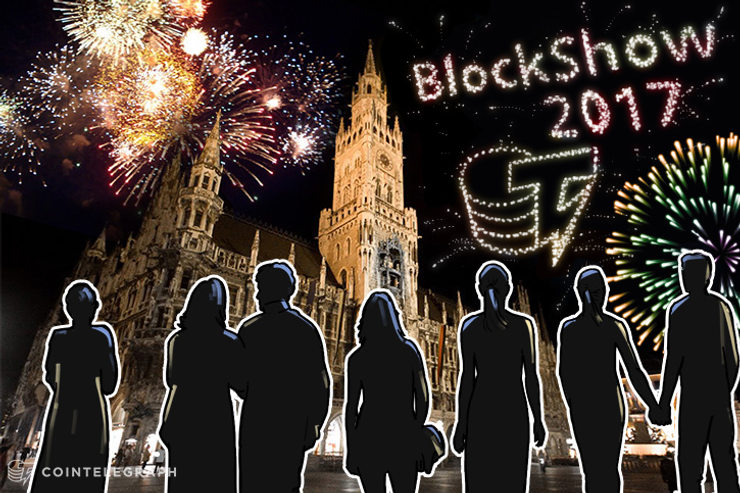 The event we all have been waiting for - The BlockShow Europe 2017 - finally came to Munich. With 560 attendees, 26 exhibitors, and 26 speakers, Blockshow 2017 became the largest international Blockchain-related event ever organized in Europe.

Led by Elizabeth Lumley, the coolest badass fintech lady, and managing director at Rainmaking, the event covered a number of hot topics ranging from practical application of Blockchain technology to aspects of running an ICO.

Bitcoin legend Charlie Shrem compared Blockchain to the printing press and pointed that the speed of its development is really incredible, therefore it is hard to say what direction we will go.

He said in the exclusive interview with Cointelegraph:

“Initially we all thought that Blockchain is made for financial and banking industry. But look at the variety of use cases we are seeing now. Blockchain allows going directions we all thought were impossible.”

Imagine sharing energy like you share music - @SonnetFrancois and @CharlieShrem discuss the future of #blockchain at #BlockShow2017 pic.twitter.com/3IjVm3FyOW

“Blockshow has been organized by Cointelegraph Events in partnership with nexussquared and Blockpay for one very important reason - to provide community members with an efficient business platform for networking, learning, arranging meetings, building the vision of the future and understanding the Blockchain technology.”

Crezee noted that Blockshow is not just a one-time gathering of nerds and geeks, but it is planned asan international business event with the potential to grow year by year.

“Let’s say now we have 25 business solutions and eight industries. In a year there are going to be 50 solutions in our exhibition hall, and in three years - 150. That’s what we are aiming at!”

Behind the scenes - @Cointelegraph team grabs exclusive interview with @CharlieShrem at #BlockShow2017 ? pic.twitter.com/FmtivjRfR2

Blockchain is believed to bring trust and privacy to a lot of different industries. It’s changing the whole paradigm of how things are done in the production field as well as the logic of business models and our general approach towards partnership and cooperation.

"Picture it as a backbone" - @mikalammi of @KinnoKouvola on optimizing supply chain and logistics using #blockchain at #BlockShow2017 pic.twitter.com/d2xkRLKh3e

According to Mika Lammi, Head of IoT Business Development at Kouvola Innovations Oy, which is transforming logistics industry with Blockchain, Blockchain is the backbone that would connect all the stakeholders together, and the more we know about technology, the more value we can add across industries.

Use cases of the #blockchain Panel discussion at #BlockShow2017 @Cointelegraph pic.twitter.com/O9BlPoPAiA

One of our amazing volunteers, Max, with @BitBayPL 's #bitcoin mascot at #BlockShow2017 ? pic.twitter.com/vonJnwKVzm

Milan Sallaba representing Deloitte was speaking about practicalities of technology implementation and company’s approach to it emphasized the need to connect startups and businesses:

”On the startup side, you have more ideas inspiration and creativity, but less understanding how the corporate world operates. Therefore we need to ensure the connection between them. That's what we are doing at Deloitte Blockchain Institute.”

Many speakers noted that people still don't understand what Blockchain is, therefore they can't trust it. Next year BlockShow Europe will be back and will be greater in every aspect – with more sessions, more Blockchain projects, more exhibitors, more people. And of course more value for us all.

More materials about BlockShow including exclusive interviews with Charlie Shrem, Paolo Taska, Mika Lammi, Jens Hermann Paulsen, Milan Sallaba will be published soon. The event was so huge that it is hard to cover it all in just one article. Stay tuned!

There was a drilling machine outside #BlockShow2017 the entire day. I think they misinterpreted the memo on what "mining" is. ¯\_(ツ)_/¯ pic.twitter.com/6CcHW69Hvm