One of the most notorious bitcoin companies around will finally be facing legal consequences. 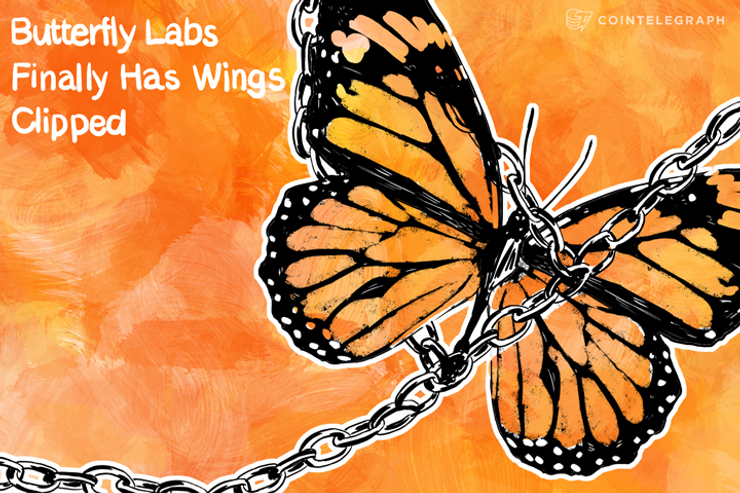 UPDATE: Butterfly Labs has issued an official comment, which can be found in its entirety below this article.

The tale of Butterfly Labs may finally be drawing to a close. After unconfirmed weekend rumors that the federal authorities had raided Butterfly Labs' headquarters, the FTC has requested and was granted an injunction, preventing Butterfly Labs from selling anymore hardware while also freezing its assets pending the investigation.

Butterfly Labs has been at the center of controversy nearly since its inception. Pre-ordered hardware almost always shipped late, leaving miners who had calculated profits based on energy consumption predictions, the hashing power of the hardware and Bitcoin's predicted difficulty level in the cold. The problem was that when mining equipment arrived late, Bitcoin's difficulty was higher and the profits Butterfly Labs' hardware should have produced were impossible to realize.

This allegedly resulted in investments that should have brought large returns instead resulting in modest returns or worse, sharp losses. The order, which was first uncovered by the National Journal, states that there is good cause to believe that Butterfly Labs violated “Section 5(a) of the FTC Act” and would be a threat to current consumers if they were allowed to continue to operate and would also be a risk at laundering their assets. As is typical in these situations, Butterfly Labs is required to keep all their records and FTC officers have been granted access to their grounds.

It is unclear if the FTC was successfully able to sieze any holding Butterfly Labs holds in digital currencies, although they would presumably be treated like any other asset from a legal sense.

The issues caused by Butterfly Labs' inability to ship its hardware at a reasonable time resulted in it having one of the worst reputations in the industry, Recently, customers brought a class action lawsuit against the company.

That lawsuit seems unrelated, at least in a legal sense, from this one, which the FTC hopes will result in customers receiving their lost funds. That is, if the company or the other defendants are found culpable. We should find out more on September 29th, which is when the court will decide if Butterfly Labs' assets should be frozen for the duration of the trial or not.  Customers hoping for a refund will likely have to wait until after the court's proceedings.

The FTC hosted a Twitter question and answer session about the situation today.

The following is Butterfly Lab's official statement on the matter:

“Butterfly Labs is disappointed in the heavy-handed actions of the Federal Trade Commission.  In a rush to judgment, the FTC has acted as judge, jury and executioner, contrary to our intended system of governmental checks and balances.  The FTC's current actions are negatively impacting our thousands of customers and our dozens of employees.  Their current media campaign should only further alarm a knowing citizenry and raise questions as to why the FTC wouldn't simply let this case play out through the judicial system.  That is what Butterfly Labs intends to do.

At this time, Butterfly Labs is cooperating fully with the Temporary Receiver appointed by the Court.  A hearing is set for September 29 and Butterfly Labs has asked the Court to allow it to present testimony from key witnesses for the company.  Butterfly Labs intends to defend our business and our nascent and promising industry.  The government wants to shut Butterfly Labs down, and we are not going away without a fight to vindicate bitcoin, our company, and our employees.  Our continued focus is our customers and finding a way to continue to deliver products and processing refunds for those who have requested them.”