ADA’s price has rallied on the base of Shelley and “smarter contracts,” but mainstream adoption is still a faraway goal.

Bitcoin’s (BTC) volatility hitting its lowest since late 2018 has forced investors to turn to altcoins that could act as more lucrative investments in their portfolios. Cardano (ADA) has been one of the largest benefactors of this move. Its price has rallied around 400% in 2020; its market capitalization has almost quadrupled to surpass Bitcoin SV (BSV); and it has become the fifth-largest cryptocurrency in circulation by market capitalization.

The recent price rally has demonstrated the faith the community and industry have in Cardano’s roadmap, its vision and its founder, Charles Hoskinson. The project, however, is still in its nascent stages. There is still a lot for Cardano to prove in terms of executing its plans and gaining recognition among prominent entities like Ethereum.

However, Ryan Fang, the co-founder and chief operations officer of Ankr — a firm that provides cloud solutions for blockchain applications — feels more confident in Cardano’s proven abilities, the community and its network. Talking also of his holdings in Cardano, he stated:

“The price rally has been tremendous, as it broke two resistance levels. We have been watching Cardano from more than a year with their development since the testnet till the mainnet. The network has emerged a lot, and the price rally has proved the strong market sentiment of the project and the trust community has got on the project.”

The price rally in 2020 went rampant after the announcement of the Shelley upgrade on May 25 and even further when Cardano began releasing the code for Shelley on July 7. This upgrade is said to be unique because Cardano claims it will make the network from 50 to 100 times more decentralized than other prominent blockchains. It has also enabled staking to reach 1,000 stake pools.

In contrast with Bitcoin’s proof-of-work algorithm, Cardano runs on a proof-of-stake algorithm called Ouroboros. PoS is a method that secures a decentralized blockchain network by allowing people who hold that blockchain’s tokens to validate transactions and blocks. This process allows stakers to earn tokens, also known as block rewards, proportional to the amount staked. Fang further commented that the implementation will open up competition for consumer adoption, adding: “It’s a very bold and challenging move to implement. ETH has been trying to do this since more than 2-3 years now. But Cardano being able to achieve the consensus protocol on Proof of Stake algorithm is commendable.”

Cardano’s incentivized testnet was first launched back in December 2019 to enable staking rewards for engagement during the testing period of the Shelley upgrade. Currently, there are more than $13 billion ADA staked on ITN.

The term “smart contracts” was introduced about 26 years ago by cryptography expert Nick Szabo and has been one of the most integral developments in the crypto industry. Smart contracts are transaction protocols maintained by computers that are intended to automatically execute, control or document transactions according to the terms of the contract.

For Cardano, the implementation of the Goguen era will take smart contracts a step further to “smarter contracts.” While smart contracts eliminate the need for manual intervention for interactions on a particular blockchain, the Goguen mechanism will not prioritize ADA transactions and contracts over other tokens issued on Cardano, like Ethereum does for Ether (ETH) over ERC-20 tokens.

Bakyt Azimkanov, the communications and marketing director at Cardano, told Cointelegraph how the Goguen era will create use cases through decentralized application: “The Goguen era will open the way for the development of enterprise-level and mission-critical decentralized smart contract applications, which is the first crucial step to building and deploying real-world solutions on Cardano.” Sumit Gupta, a co-founder and the CEO of CoinDCX, shared his opinion with Cointelegraph:

“Rather than being a single-asset ledger, Cardano will become a multi-asset ledger that allows users to define, forge and transfer their custom tokens on the network. The Goguen update will help developers build decentralized apps on Cardano’s blockchain network with greater flexibility.”

This mechanism intends to provide developers with more security on the network, as all the tokens will inherit all the security and smart contract behaviors that Cardano’s native cryptocurrency, ADA, would have. Azimkanov stated on the matter:

“In the deployment of decentralized applications built on top of blockchain protocols, smart contracts become particularly useful. By virtue of their trustless nature, users can interface with Web 3.0 applications without entrusting their sensitive information to the app developer, and the developer or smart contract creator receives guaranteed and automatic settlement at the point of contract maturity.”

Cardano has been looking to solve issues previously encountered on other platforms like Ethereum and Ripple. This aspect enables the platform to bring more investors without diluting its base of believers who don’t hold the coin to speculate or hedge against another bet in their portfolio.

Looking at the one-year ownership structure composition, it’s clear that Cardano has seen continued support, with the proportion of hodlers consistently being over 50%. However, the proportion of traders has also been significantly rising in 2020, proving that ADA has started to see more volatility in anticipation of the official launch of Shelley. 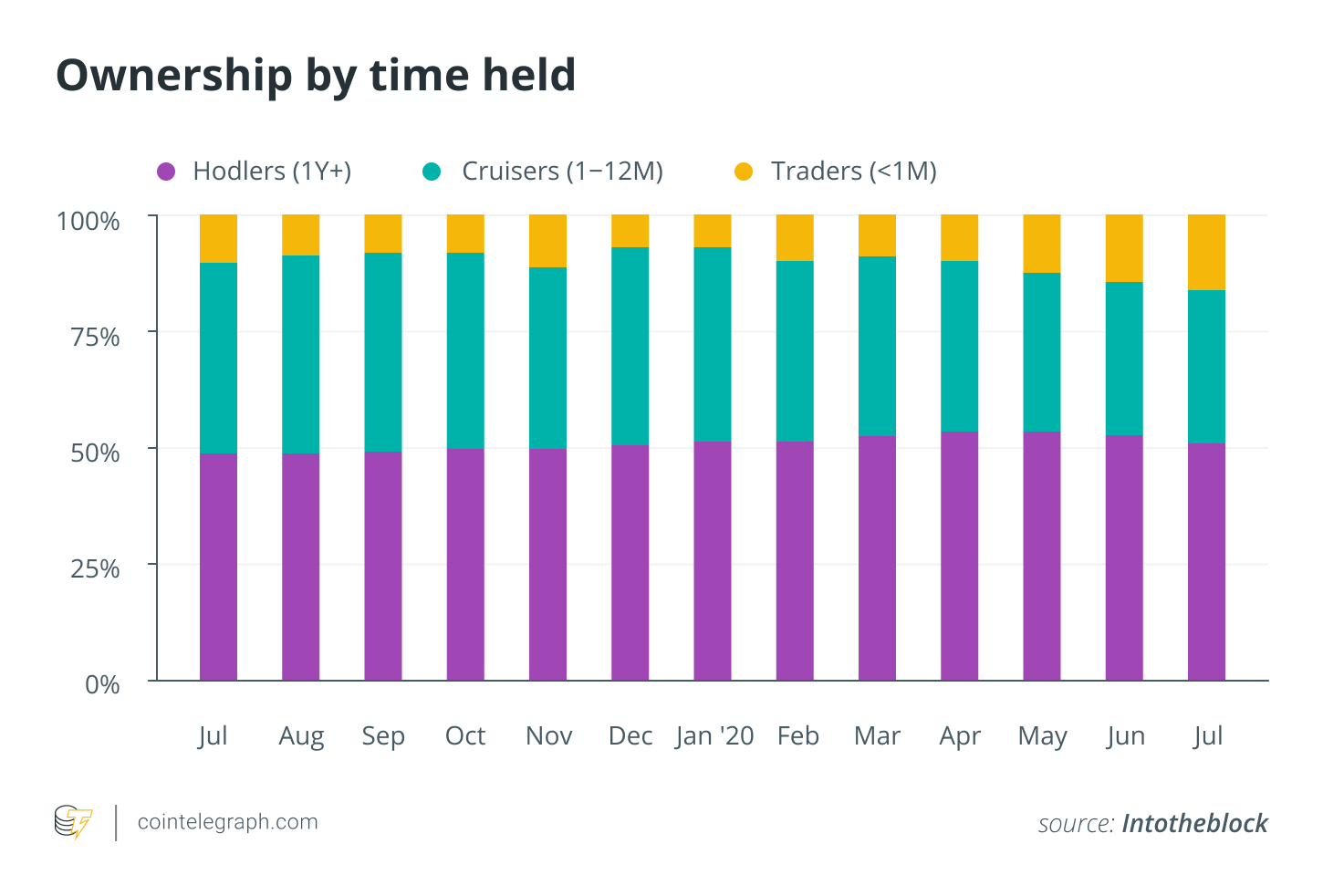 Even Ryan Selkis, the founder and CEO of Messari, has recently stated that Cardano has “plenty of room for growth” and that the recent price surge highlights the excitement around staking ahead of the Shelley upgrade. An announcement that ADA holders would be able to stake their assets in Coinbase custody by Q4 2020 has fueled speculation even further that ADA may be listed on Coinbase by the end of this year.