European Bitcoin integration continues with the opening of Austria’s first Bitcoin ATM in the city of Graz. 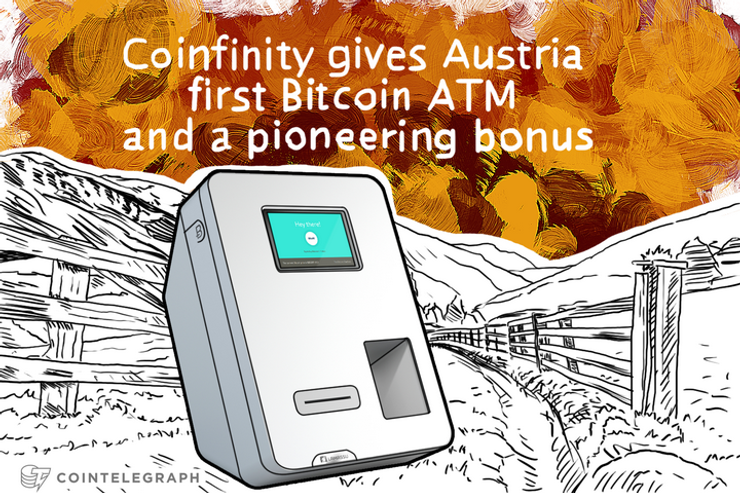 European Bitcoin integration continues with the opening of Austria’s first Bitcoin ATM in the city of Graz.

The Lamassu-manufactured machine is owned and operated by local company Coinfinity, whose approach to raising Bitcoin’s profile locally is somewhat different to the majority of ATM companies.

“We want to facilitate the access to Bitcoin and introduce interested people in a simple and comprehensible manner to the topic",” joint managing director Max Tertinegg explains in a press release issued June 23. “We offer help and advice regarding the installation of a digital wallet for the safekeeping of Bitcoins,” partner Stefan Kliment added.

The machine has been installed in Coinfinity’s office in Graz’s creative Lend quarter but is accessible currently only during its office hours for fiat-to-Bitcoin transactions. Coinfinity states however that this setup will allow them to take a more hands-on approach to integrating the machine with the general public.

“Being at the heart of the creative quarter of Graz, our aim is to educate and inform the general public as well as businesses about Bitcoin and other cryptocurrencies,” its website continues.

While Bitcoin ATMs are most commonly placed in third-party locations such as cafes and shopping centers, the company has already taken steps to promote its less conspicuous installation by throwing a launch party June 27 at its Graz office, to which all those interested in learning about the ATM and Bitcoin in general could freely attend.

And it will go further: “In order to drive merchant adoption for both online shops and offline retailers,” Coinfinity says, consulting services for other organizations wishing to come on board are already being offered in Austria, Germany and Switzerland. Coinfinity explains:

“By providing co-working infrastructure and networking to the community, we will also be able to support our own Bitcoin products and projects.”

Separately, Coinfinity also participated in construction of Cointemporary.com, a unique online art gallery in Vienna. The idea of local artist Valentin Ruhry, the project displays contemporary pieces online for a period of seven days, during which time they may be viewed or purchased using only Bitcoin.

“The price for the artwork is fixed in BTC and does not fluctuate along with exchange rates,” a blog post about the project explains. “This is revolutionary in its own way, as it makes Cointemporary one the first places where Bitcoin is treated as an actual unit of account.”

The promotional strategy is bold indeed in a country which has had little exposure to digital currency thus far, and future developments from Coinfinity are likely to be many and varied, both for ATM propagation and wider outreach projects.

In the meantime, the Graz ATM can be found at Mariahilferstrasse 21 for use Monday to Friday between 10am and 1pm, and again from 2pm to 5pm CEST.