Concerning Garza, TNABC and Bitcoin Media: ‘Down with Everything Associated with Anyone’ (Op-Ed)

The GAW/Paycoin controversy has sparked online protests against TNABC for allowing Josh Garza to speak, but how far should it go? 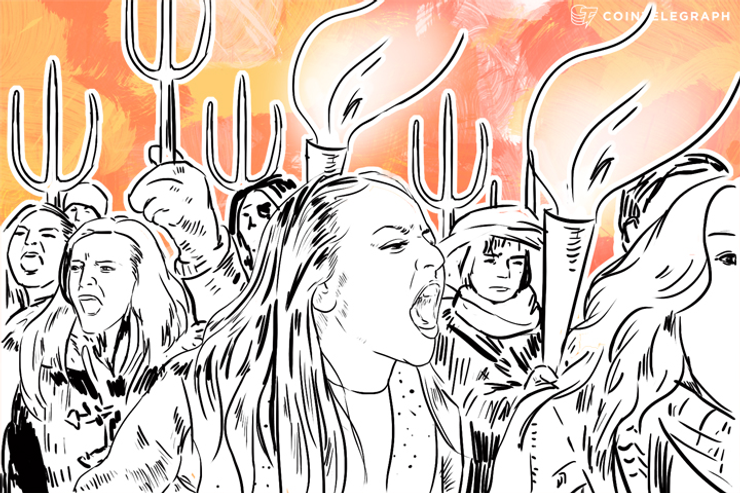 Paycoin was announced back in November and became a media darling, thanks to backing by Josh Garza's GAW Bitcoin mining company and a promised feature set that was longer than a rich kid's Christmas list.

Then it all came crashing down. The most exciting feature, and the one many people cared about, was the promised US$20 price floor. Other alleged promises never came in, including Amazon partnerships,100,000 merchants being lined up to accept the new digital currency, and technological innovations that were either nonexistent or poorly implemented.

Most cryptocurrencies are fueled by speculative investment, so it was the US$20 floor that had people excited, and then angry when it fell through. Everything else could have gone awry, but if investors could have still pulled out the promised US$20 price point, there would have been no harm and no foul. People could have left with their promised ROI and everything else, including the Amazon and Walmart deals, would have gone unnoticed by anyone but the hardcore. Most investors would have been too busy counting their money to care where they could have spent Paycoin.

Investors are pissed, as they should be. GAW and Garza have gone back on promise after promise. Although investors should have been cautious about things that sounded too good to be true, the coin was either pumped with promises the founders never intended to deliver on, or it was developed with such naivete and incompetence that it remains doubtful that anyone could trust developers again.

Which is where the story about Paycoin and GAW currently sits. Promises haven't been delivered, investors rightly feel duped, and thanks to the mainstream media attention for Paycoin before it fell apart, the entire affair has reflected poorly on Bitcoin as a community. Well-meaning members of the community have taken it upon themselves to organize a protest of Garza's upcoming speech at The North American Bitcoin Conference (NABC) in Miami later this month. The protest has extended to Bitcoin media companies that advertised Paycoin or GAW, and even to TNABC itself.

Let me first start by saying that an organized protest against Garza is a commendable thing. Too many coin developers get a pass on questionable business practices simply because Johnny Law is rarely found in the current marketplace. If we want to avoid stringent regulation, we need a to start self-policing, and we are currently doing a terrible job. It seems like every week a scam is exposed, usually too late to save investors. Untold more scams wait just below the surface, and even more are likely attempted but never take off.

This is a problem, and one of the biggest problems facing the Bitcoin—and particularly the altcoin—space. Investors, and those concerned with the reputation of the Bitcoin community, should try their best to make Garza's life as uncomfortable as possible (without resorting to violence or threats of violence) until answers are forthcoming and amends are made, or justice is otherwise served. We should do our best to turn Bitcoin from a scammer magnet to a scammer repellent. That is, after all, much of the point of moving away from the banking industry and toward bitcoin in the first place.

While we do that, however, we need to make sure we aren't also negatively affecting those who work toward advancing the space. Standards for where you consume media are important. If standards didn't exist, we would all watch Fox News. They do have the best-looking anchors, after all. But standards, or rather the lack of them in the mainstream media, are what has helped accelerate the media revolution that is currently taking place here on the Internet.

But standards can be set too high. And it may be too much to expect every Bitcoin media company to correctly predict every scam that comes out of the crypto community.

First let’s talk about what needs to be done about Garza’s speech at TNABC, and whether they should let him speak at all. GAW sponsored the event, so TNABC may have a financial interest in letting Garza speak. But they also have an obligation to the public, who are paying US$200 to attend, and that needs to come above all else.

At the same time, we could argue that it is critically important that Garza's speech is not canceled. The North American Bitcoin Conference signed Garza on to talk because he is a big figure in the community, not because he was well-liked. Now that he is (for the most part) hated, the importance of his speech doesn't change. To the contrary, canceling on him would let him, if he is guilty, take the easy way out. There is nothing a scammer likes better than being able to slink away into darkness without anyone noticing, so they can jump back in later with their next scam.

Protestors should make it clear to Garza that they are not looking forward to his time there. If Garza himself cancels, it is he who broke the contract, not the organizers of TNABC, and it is he who will look guilty to any remaining would-be investors.