CryptoRuble: How Stable Could Russian National Stablecoin Be?

On November 7, the chairman of Russia’s State Duma Committee on Financial Markets announced details of the “CryptoRuble,” a long-discussed government cryptocurrency project.

Specifically, the official said that a state-backed stablecoin would be a complete equivalent to the Russian fiat ruble, but in a digital space. Russian authorities have now ended up with this concept after years of contradicting statements, and still, a ruble-pegged stablecoin might not turn out stable in the end.

Long and complex history of national cryptocurrency in Russia

Russian national cryptocurrency was originally referred to as “Bitruble,” but then the term “CryptoRuble” became more common in the media. 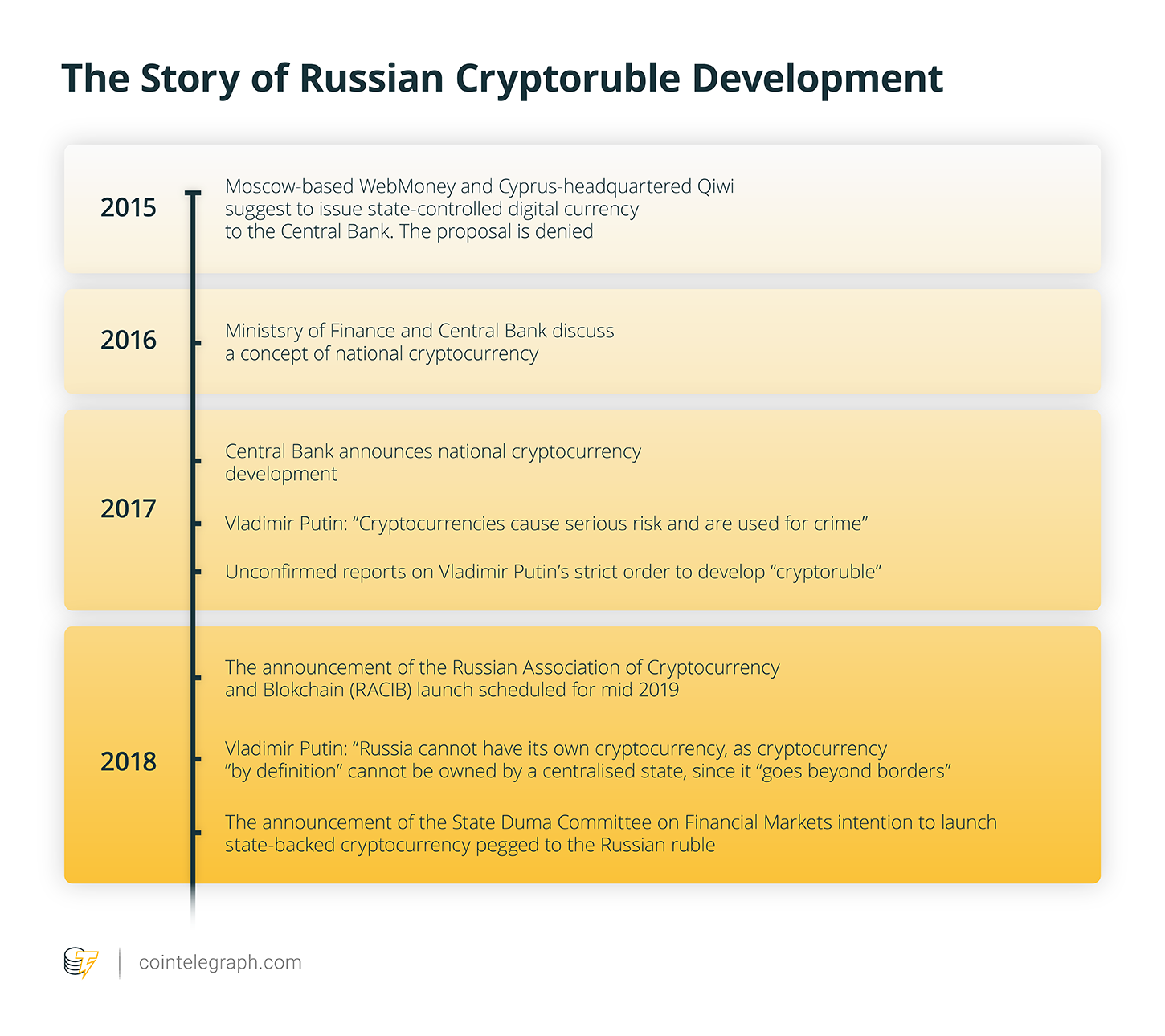 The history of CryptoRuble could be traced back to the fall of 2015, when a Moscow-based online payment settlement system, WebMoney, and Cyprus-headquartered payment service provider, Qiwi, separately approached the Central Bank of Russia (CBR) and offered to issue a state-controlled digital currency in the country.

Both proposals were vigorously denied by the government. Specifically, the Russian Ombudsman, Pavel Medvedev, called Qiwi’s suggestion “technical hooliganism” that is “illegal” and “absolutely inappropriate.”

“The Constitution says who has the right in Russia to issue money; it is the [Russian] central bank. The only currency in Russia is the ruble. The rest of the money is illegal, and this kind of disgrace [would be] a criminal offense.”

However, the Russian government’s views towards “CryptoRuble” have been considerably inconsistent to this date. Thus, in May 2016, Russian newspaper Kommersant reported that local officials were discussing the concept of a national cryptocurrency that would “minimize the amount of anonymous transactions,” citing the Assistant Director at Russia’s Federal Financial Monitoring Service (Rosfinmonitoring), Pavel Livadniy.

Several days later, on June 5, the head of the CBR, Elvira Nabiullina, elaborated on Skorobogatova’s statement, adding that a national cryptocurrency was not the agency’s top priority. Nabiullina called it “a medium-term, or, perhaps, a long-term” plan, however.

In October, 2017, President Vladimir Putin claimed that cryptocurrencies “cause serious risk” and are used for crime, as the CBR said it would block websites selling Bitcoin and altcoins. Just a month prior to that, Russia’s Finance Minister, Anton Siluanov, argued that the authorities had to accept the idea of the digital currencies market:

“There is no sense in banning them, there is a need to regulate them.”

Also in October 2017, local news media, Argumenti i Fakti (AiF), reported that Putin “gave a direct order” to develop the “cryptoruble.” The news article quoted Minister of Communications, Nikolay Nikiforov, as its source. Nikiforov also reportedly mentioned specifics of the national cryptocurrency for the first time. According to the official, the “CryptoRuble” could not be mined; and it could be exchanged for regular rubles at any time (though if the holder is unable to explain where the CryptoRubles came from, a 13 percent tax will be levied). The same tax would be applied to any profit made from trading the token. Nikiforov said:

“I confidently declare that we run CryptoRuble for one simple reason: if we do not, then after two months our neighbors in the EurAsEC [The Eurasian Economic Community] will.”

However, that report was not confirmed by mainstream media, and it is still unclear if Putin gave his approval for the above mentioned concept. As soon as next month, in November 2017, Nikiforov argued that the term “CryptoRuble” was “quite incorrect,” and suggested calling it “a digital token.”

In December 2017, the government news agency, TASS, reported on a recent meeting dedicated to the legislation for digital currencies in the country. The article argued that both the Ministry of Finance and the Central Bank of Russia were skeptical about issuing a national cryptocurrency.

On Jan. 1, 2018, the Financial Times reported on another government meeting, where Sergei Glazyev, economic adviser to President Putin, allegedly argued that the CryptoRuble could help relieve the pressure of Western sanctions. Later, the concept will be picked up by countries like Iran and Venezuela, who also aim to use their national cryptocurrency to bypass such penalties.

However, there was still no unified official stance from the Russian government on the matter of issuing a national digital currency. And the indecisiveness continued.

A few weeks later in the same month, the Russian Association of Cryptocurrency and Blockchain (RACIB) announced that the CryptoRuble will be launched in the middle of 2019. According to Arseniy Sheltsin, the head of RACIB, details of the project will be officially presented and discussed in July 2018, while the coin itself should be issued a year later.

In June 2018, Putin claimed that Russia cannot have its own cryptocurrency, as cryptocurrency “by definition” cannot be owned by a centralized state, since it “goes beyond borders.”

“Cryptoruble” finally turns into a stablecoin

After a long back and forth on the topic within the Russian government, the cryptoruble finally morphed into a more concrete concept.

On Nov. 2, 2018, the chairman of Russia’s State Duma Committee on Financial Markets, Anatoly Aksakov, said that his agency is considering the launch of state-backed cryptocurrency pegged to the Russian ruble.

The official expressed his confidence that the government will back such cryptocurrency, clarifying that “it will be a ruble-pegged cryptocurrency.” The deputy also added that the implied coin will represent a blockchain-powered stablecoin pegged 1:1 to the ruble.

Aksakov further described the model of creating the stablecoin, stating that the cryptocurrency will be backed by a banking deposit of a certain amount. After that, a banking institution is set to issue a corresponding amount of crypto assets by using blockchain and adhering to the 1:1 proportion.

The chairman also clarified that the cryptocurrency will be issued by the central bank since it is backed by fiat currency. In conclusion, Aksakov noted that the implementation of blockchain technology in terms of the issuance of “crypto-money” is “promising.”

Interestingly, Aksakov is the same official who erased all mention of Bitcoin and Ethereum from a draft bill on digital currency regulation ahead of its reading in the State Duma in October 2018. He explained the move by saying “we decided we don’t need them, those ambiguous Bitcoins.”

On November 7, Aksakov provided even more detail regarding the national-issued stablecoin. Specifically, he said that the “cryptoruble,” which may appear after the adoption of laws regulating the cryptocurrency industry in Russia (which are also consistently changed and delayed), would be “the same ruble, just in encrypted form.” The State Duma chairman explained that it would be possible to change the Russian stablecoin for the equivalent in fiat money:

"For example, you bring 100 thousand rubles to a bank and get 100 thousand crypto rubles, one to one for fiat money. You use these funds to buy goods fixed in the blockchain.”

Aksakov also underlined that the crypto ruble — “the ruble in blockchain” — would replace the fiat ruble “as soon as the blockchain begins to occupy a significant place in our economy.” He did not specify what type of blockchain that was, however. Previously, Minister of Communications Nikiforov argued that the “CryptoRuble” should be based on a locally-developed technology.

Issuing a stablecoin that is pegged to the Russian ruble might seem somewhat questionable from an economic perspective, as the currency has not shown consistent growth, or even stability over the past years. On the contrary, it has been on constant decline since the political tension between Russia and the West intensified in 2014. 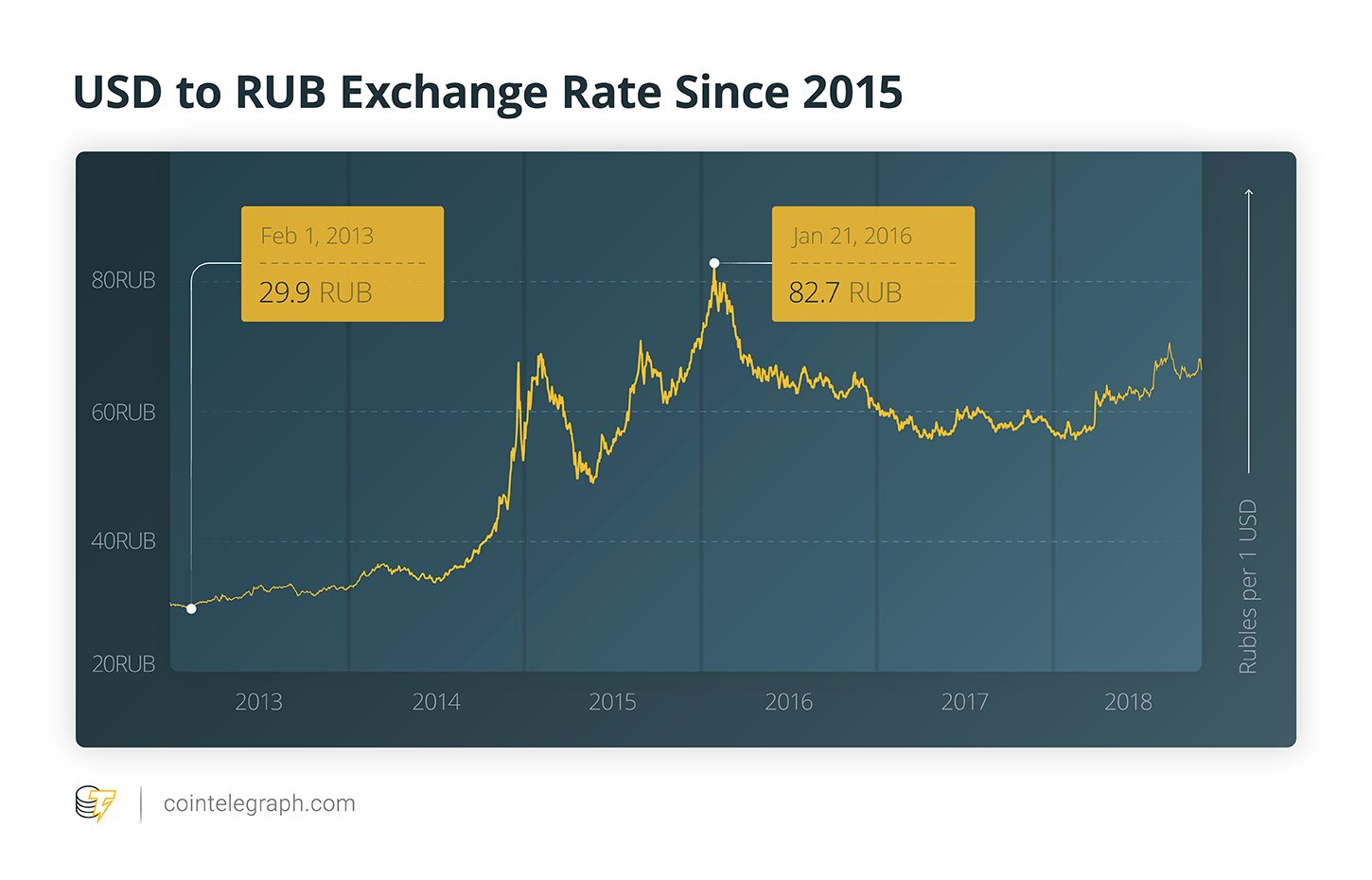 More specifically, the price of the ruble plummeted on Dec. 16, 2014. The “Russia Trading System” (RTS) Index, denominated in U.S. dollars, fell 12%, the most on any given day since the midst of the global financial crisis in 2008. On December 15, Russian gold and foreign currencies reserves were reduced by "U.S. $15.7 billion, to below U.S. $400 billion, for the first time since August 2009," as the government began fighting its “worst financial crisis since 1998,” as per Reuters.

It happened mainly due to two factors: first, the price of oil — the commodity upon which the Russian economy is largely built — began to fall sharply, forcing the CBR to raise interest rates by a hefty 650 basis points. Secondly, strict Western sanctions imposed against Russian companies that have been rolled out in response to Russia’s annexation of Crimea earlier in 2014, have played their role in the ruble’s dramatic fall as well.

The ruble crash had a significant impact on the Russian economy — as a result of the fall, local people were financially challenged. Annual inflation climbed to more than 10 percent. Prices of goods, including beef and fish, rose 40 to 50 percent within a few months before the end of the year, due to Russia's ban on Western imports — the government’s countermeasure to the U.S. and European sanctions. Car sales fell by 12 percent, comparing to the previous year.

The situation somewhat stabilized over the next couple of years, but ruble to U.S. dollars rates have remained high since. The local ban on Western imports stayed as well, considerably limiting Russians’ consumer behavior.

In August this year, the situation was somewhat repeated once again, although to a smaller degree. Russia’s ruble fell to 69.40 against the dollar, its lowest level in two years. The CBR blamed the slide in the ruble’s value on new U.S. sanctions introduced by the Congress over a chemical-weapon attack in Salisbury and reports on Russia’s interference in the U.S. presidential elections in 2016. 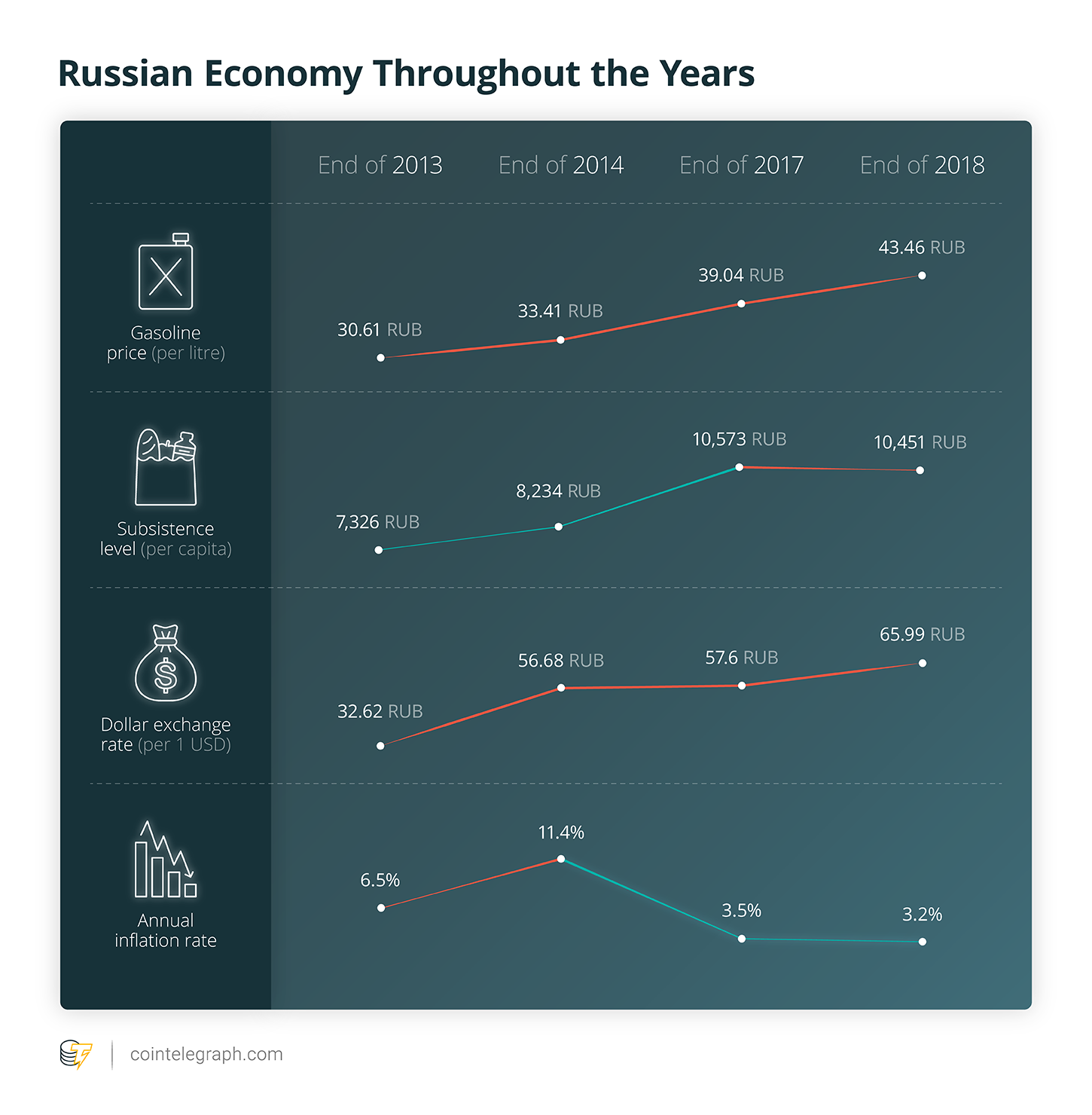 If a ruble-pegged cryptocurrency is given a green light from Russian authorities after a years-long exchange of contradicting comments, the “cryptoruble” price could be doomed to go through unexpected, politics-driven price spikes.