A New York judge has ordered that the four class-action lawsuits against Bitfinex for 2017 manipulation of the Bitcoin market are now one, though leadership remains uncertain.

The four class-action suits against Bitfinex, Tether and parent company iFinex over alleged market manipulation leading to Bitcoin’s (BTC) 2017 bull market have been consolidated — with implications for every BTC buyer since April 2017.

Per an order dated Jan. 24 and filed Jan. 27 from Judge Failla of the court of the Southern District of New York (SDNY), four complaints have been consolidated. Plaintiffs Leibowitz, Young, Faubus and Ebanks — as well as assorted sub-listed parties in each of those cases — will now have their cases heard jointly.

The class-action suits against iFinex and its daughter companies crypto exchange Bitfinex and stablecoin operator Tether allege that those companies worked together to create Bitcoin’s infamous price bubble at the end of 2017. These complaints followed similar research that appeared this summer.

The potential class pool for these cases is massive, potentially including anyone who has bought Bitcoin since April.

The relationship between iFinex, Bitfinex and Tether has been the source of considerable controversy, with one of the complaints in this class-action including the below schema (BFXWW and BFXNA are the names of Bitfinex’s legal registration): 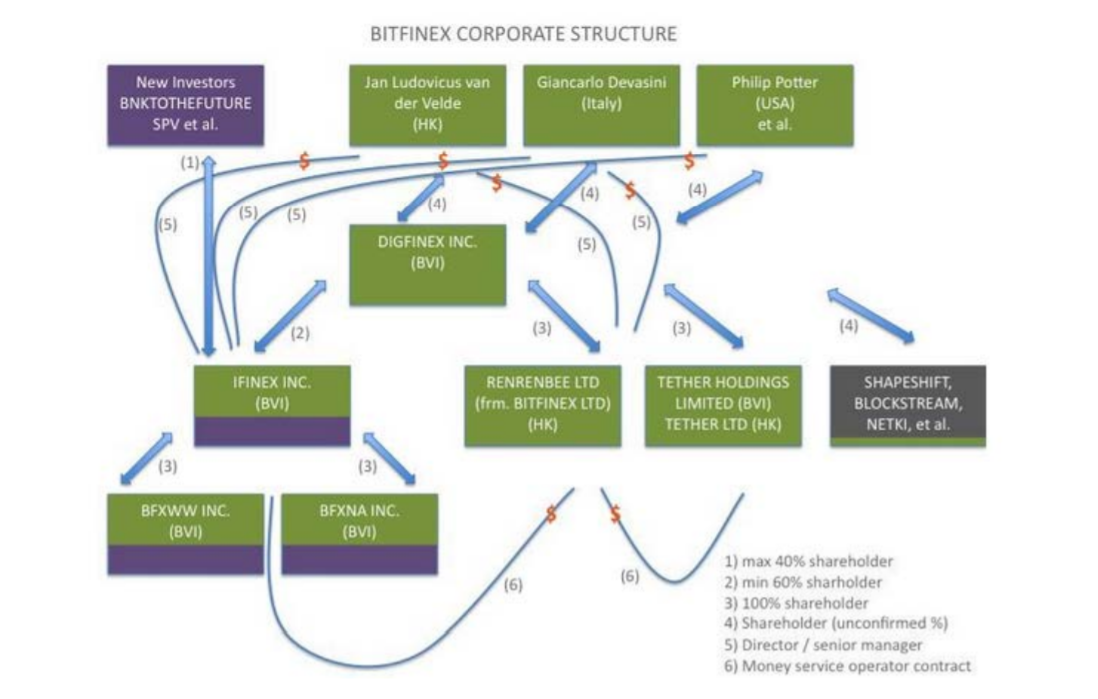 Ebanks’ complaint alleges that the relationship between these entities was deliberately opaque to allow illegal activity, explaining:

“Despite defendants’ best efforts, the close interconnections between Tether and Bitfinex were exposed, in part, through the leak of documents from offshore legal services provider Appleby (colloquially dubbed the “Paradise Papers” leak) in November 2017.”

A representative from Appleby reached out to Cointelegraph after publication to identify the source of the referenced information as the Saint Kitts and Nevis corporate registry as publicized by the ICIJ, rather than Appleby.

A separate legal action by the New York Attorney General also accuses the companies of using their concealed relationship to commit financial crimes. In that case, the attorney general believes that Bitfinex used its revenue to cover an $850 million dollar loss from Tether’s reserves, which are designed to back its stablecoin USDT 1-to-1 with the United States Dollar.

Who will lead the four cases?

As Cointelegraph reported, the leadership of these four cases remains in question. Chronologically among complaints, Leibowitz was first to appear in October, while Young would file in Washington State in November before relocating to the SDNY earlier this month. Both Faubus and Ebanks would file after Young’s relocation.