Ether’s USD and BTC pair suggest the continuation of the bullish breakout that started on Nov. 3, over a week after Bitcoin’s 42% daily gains.

Over the past week Ether (ETH) has shown that it is not permanently hinged to Bitcoin’s (BTC) price action and notably, a number of altcoins are also beginning to forge their own paths higher.

Close analysis of the ETH/USD and ETH/BTC chart shows rumblings of a bullish breakout, but there are still significant challenges ahead before this can occur.

As shown on the daily chart, Ether continues to put space between itself and the multi-month descending triangle that the altcoin broke out of on Oct. 25. The digital asset has continued to notch daily higher lows and the most recent run to $194.60 almost set a higher high above the Oct. 25 local high at $199.77. 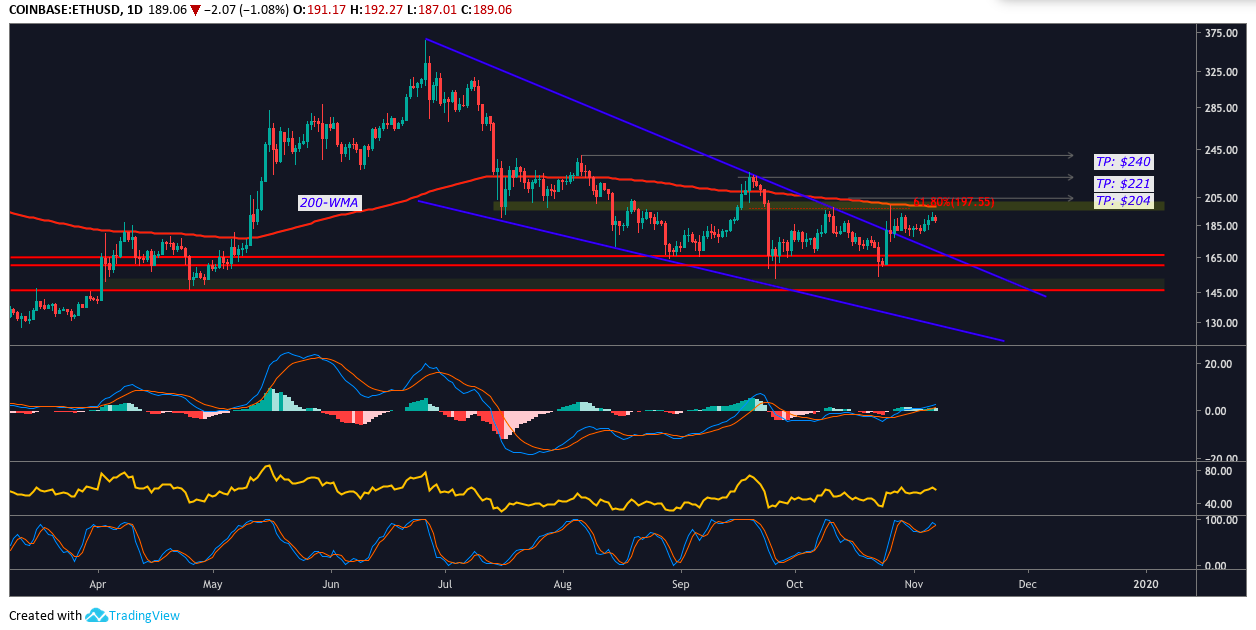 As mentioned in the previous analysis, Ether needed to clear the resistance zone at $184 to $186 in order to take a shot at $194, a point reached early in the day on Wednesday.

The next step remains the same as last week and if volume permits, bulls need to push the price up to the 200-day moving average (DMA), which also lines up with the 61.8% Fibonacci retracement level. 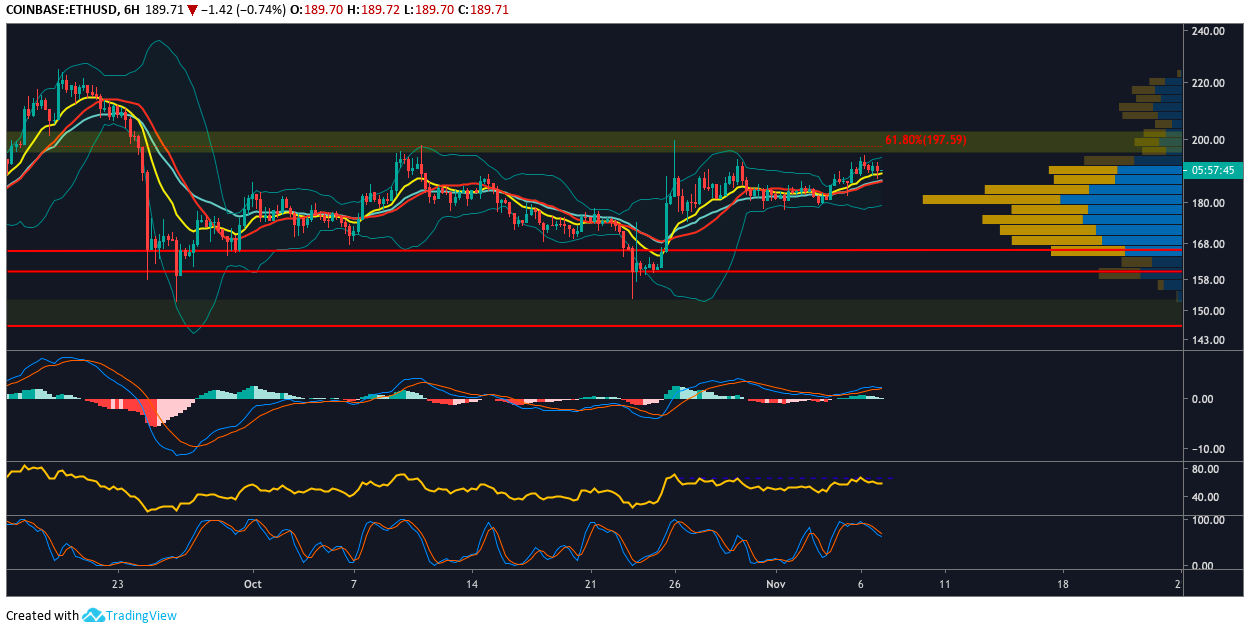 Although the price has pulled back from $194, the 12-period exponential moving average (EMA) remains above the 26 EMA and the price appears set to revisit the moving average of the Bollinger Band indicator at $187.

The relative strength index (RSI) has turned down from 68, the Stochastic RSI (Stoch) has turned down, quickly approaching bearish territory. There is also an impending bear cross on the moving average confluence divergence (MACD).

Normally this would suggest that the price could fall further to the support at $183.74, a point which is also held up by a high volume node on the volume profile visible range. Fortunately, the hourly time frame tells a different tale.

The RSI bounced slightly above 40, a reliable zone for observing such maneuvers on the hourly and 6-hour timeframe. The Stoch already reversed course off 0 and is now slowly working its way back up again after the lines converged.

The pace of the falling MACD line also has slowed as Ether’s price bounced off the lower arm of the Bollinger Band indicator and the price is currently pushing back toward the middle band at $190.65.

Traders might consider buying the breakout with a tight stop if Ether price sustains above $199.45 and the price could make its way to $225, then $240.

The ETH/BTC pairing is steadily improving, maintaining a pattern of daily higher lows as the price is pinched between narrowing 12 and 26 EMA.

The price is capped by 0.020592 satoshis (sats) and once above this point, Ether should work at taking out 0.020984 (sats). Traders will notice the divergence on the daily MACD, along with the bull cross between the MACD and the signal line. Another positive sign is that the MACD histogram has flipped green and is currently above 0. 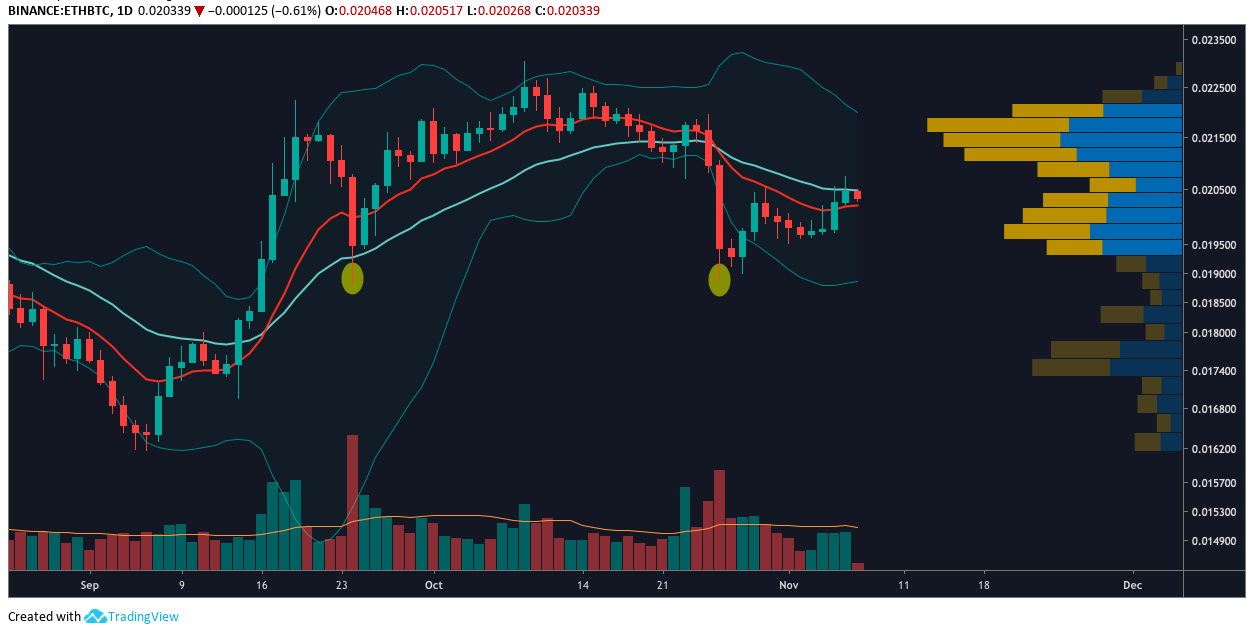 Currently, the price is being rejected at the 20-MA of the Bollinger Band indicator and a move above the first target at 0.020984 (sats) could see the price run to the upper Bollinger Band arm at 0.022033 (sats) for a 7.25% gain. This could prove to be a significant challenge as the VPVR shows significant selling pressure at 0.020984 (sats) and above. 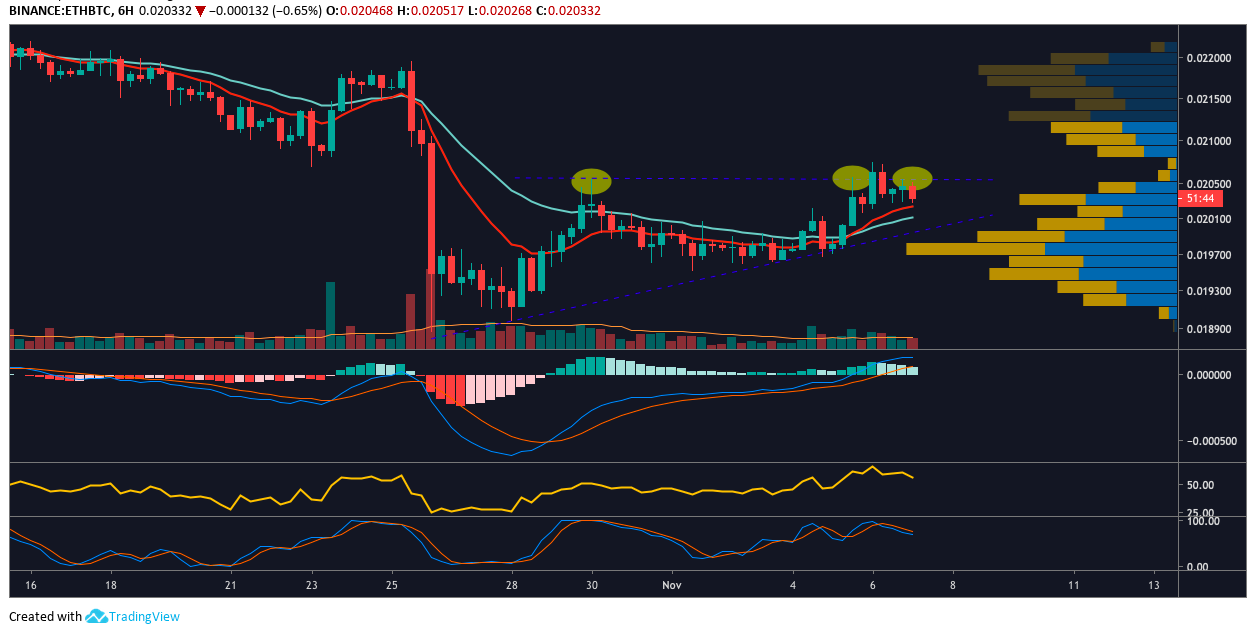 The weekly chart on the ETH/BTC pairing shows Ether consistently held back by the 20-WMA and it's clear that the price needs to push above this point before anything significant can occur.

The weekly MACD appears in good order with the MACD lifting away from the signal line and the histogram showing an increase in interest from buyers. The weekly RSI is also working its way towards 40. 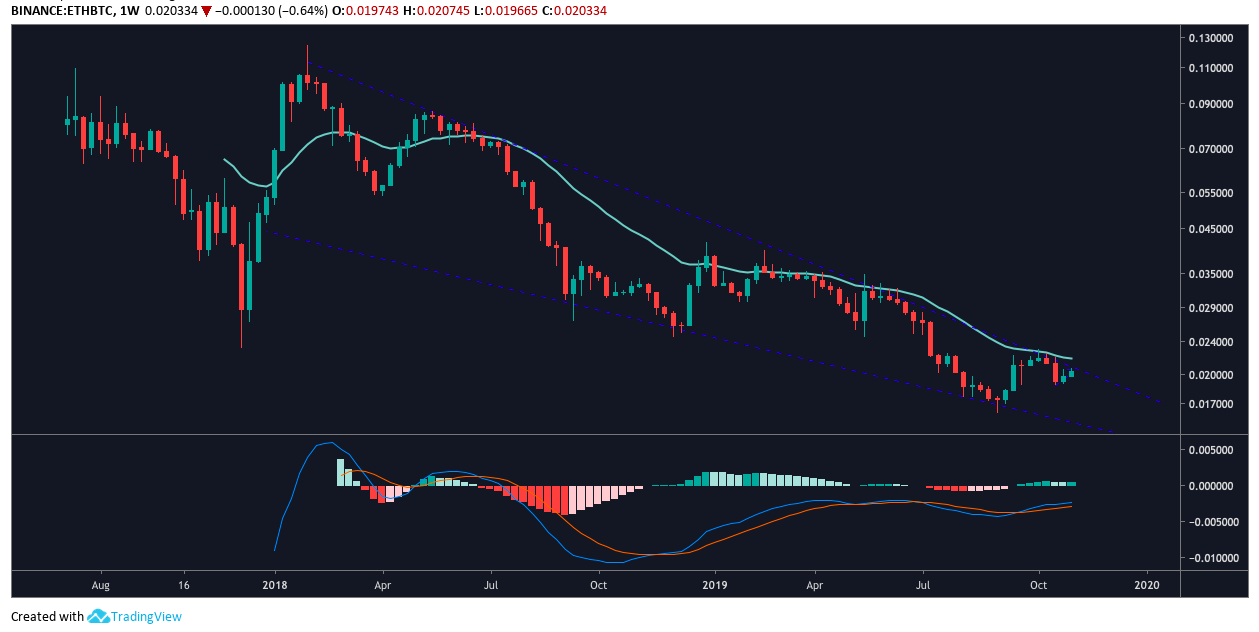 The above alternate view of the ETH/BTC pair on the weekly timeframe should provoke one’s curiosity and inspiration. ETH finds itself on the verge of breaking above a year-long descending triangle, a position familiar to many altcoins at the moment.

Traders will be watching to see if Ether can push above the 20-WMA and set a few higher highs above the current price.

The ETH/BTC pairing declined sharply against Bitcoin’s 42% gain on Oct.25 so traders will need to keep an eye on the USD and BTC pairing before opening any large positions.

Key price levels to watch for

Traders looking to set up a long position might watch the 6-hour chart to see if Ether price drops to the middle Bollinger Band at 0.020027(sats), a point which also aligns with the ascending trendline of the rising wedge pattern. A drop below this trendline will likely lead to Ether price retesting underlying supports 0.019666(sats), an area that the VPVR shows as strong support.

Below this 0.019637(sats) could also stand as support and this area lines up with the lower Bollinger Band arm. A bounce off the lower ascending trendline of the rising wedge seems probable and this brings Ether price close to the termination point of the pattern.

There is bound to be a dispute over the nature of patterns. Many traders believe ascending triangles are bullish and lead to upside continuation, whereas rising wedges are bearish and if the entry begins from a downside break this increases the likelihood that price action will remain bearish upon completion of the wedge.

We’ll let you sort that part out, just be sure to use a stop loss.