‘Everyone Is the Bank’: Blockchain Network Allows Anyone to Launch Their Own Coin

A blockchain network is enabling anyone to create their very own coin, which can be easily exchanged for other cryptocurrencies and fiat money.

A new blockchain network believes its platform offers the “next step” from Bitcoin – speeding up transaction times and giving crypto enthusiasts the chance to change between different digital currencies with ease.

In a bid to reduce the delays that some transactions on blockchain face, Minter claims it can process them in five seconds flat – meaning thousands of transactions per second can be completed without delays or additional confirmations.

Minter hopes to stand head and shoulders above the competition by giving anyone the opportunity to create their very own cryptocurrency and set a price for it. These coins can then be exchanged for other assets including Bitcoin and Ethereum, in addition to fiat currencies such as US dollars.

The startup claims that all of this is achieved with a transaction fee that’s below $0.01, and it hopes to drive forward its offering through a “large community of users and developers” who are invested in helping the platform thrive.

Minter says it has been established with a triad of objectives in mind. Firstly, it wants to ensure users have access to an easy-to-own cryptocurrency that is optimized for everyday use. The company has also concocted the irresistible notion that “everyone is the bank,” meaning anyone can issue and manage their own currencies. Minter also prioritizes liquidity, and says “every coin should have instant and absolute liquidity.”

At the beating heart of Minter is a native token known as Blockchain Instant Payment (BIP). As well as having “a lot of competitive advantages over common coins,” the startup claims it has the potential to distinguish itself from mainstream financial institutions. While the commission charged on transfers through the likes of PayPal and old-fashioned banks can be as high as 5 or 10 percent respectively, Minter says that BIP’s costs are less than $0.01 – or sometimes even free. Whereas a bank transfer can take days, its payment solution wraps things up in five seconds. And while Ethereum and Bitcoin are not mobile-ready, Minter’s platform is.

The company argues that its solution is necessary as certain platforms are never going to change. Its white paper explains: “PayPal will always have a high commission as its main goal is to protect buyers across the globe; banks will never be able to speed up transfers as they are all just too different and need intermediaries to facilitate payments.” 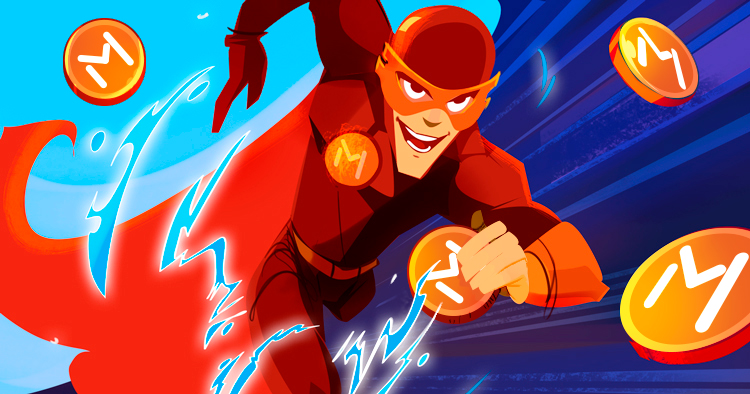 The blockchain has recently announced that it is integrating with the Telegram Open Network – enabling Minter users to transfer any coins issued on its network to TON’s blockchain. With one of the services Telegram plans to roll out, TON Payments, Minter users will be able to send and receive micropayments in Minter-based coins using the Lightning Network.

This is the latest announcement to be made about the cooperation of Minter and Telegram. Early adopters of the blockchain network have been able to pass “know your customer” procedures via Telegram Passport in the space of a few minutes, which was marked by Telegram on its official blog.

Once Minter officially launches, the platform is planning to hold what it describes as “the largest airdrop in Telegram’s history” – with users receiving BIP and other Minter-issued coins worth almost 1,000 Bitcoins – for those who sign up before October 31, 2018. In addition, the project is offering a 25 percent bonus to all users who top up their balance until October 19 2018, 19:00 UTC.

In its white paper, Minter says it is passionate about teaming up with TON because its founders, Pavel and Nikolai Durov, are “vocal advocates of freedom and independence.”

The startup wants to be developer-friendly, enabling new apps to be built, to push the platform forward. Other features include usernames as addresses, meaning that crypto enthusiasts will no longer need to memorize long strings of random characters whenever they want to complete a transaction, and future compatibility with payment systems such as Apple Pay and Android Pay. Minter plans for BIP tokens to be gradually released over a seven-year period.