From Bill Gates to Lily Alen: Bitcoin in Quotes by Rich and Famous

The biggest digital currency named Bitcoin is quite famous these days, not only because of its magical way of sending money without the help of any third parties, but also for its involvement in cyber crimes. 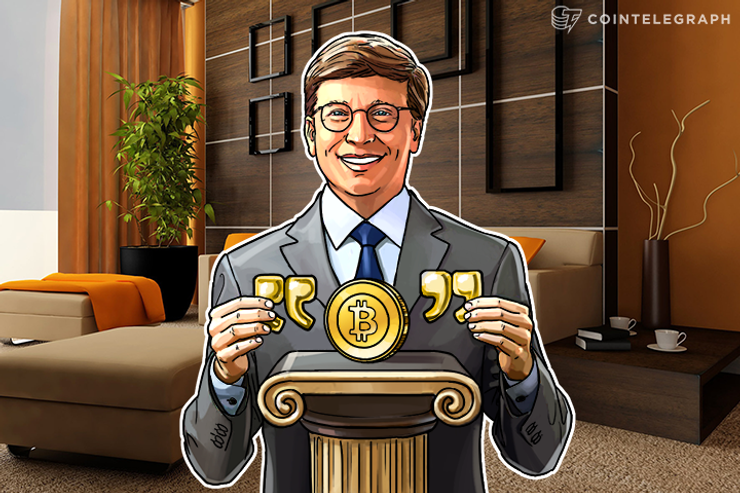 The biggest digital currency named Bitcoin is quite famous these days, not only because of its magical way of sending money without the help of any third parties, but also for its involvement in cyber crimes.

It is often regarded as something amazingly innovative with the potential to disrupt the financial system that we know today, and it is also something that attracts interest — or in some cases, causes distress — of investors and economists from all over the world.

During his “Ask Me Anything” session on Reddit platform, Bill Gates mentioned Bitcoin as “an exciting new technology,” adding that he was planning to use digital currency for his foundation to help the poor get banking services.

But not long after, he also explained why he dicided not to use Bitcoin.

Bill Gates says about the reasons:

“One is that the poor shouldn't have a currency whose value goes up and down a lot compared to their local currency. Second, is that if a mistake is made in who you pay then you need to be able to reverse it so anonymity wouldn't work.”

“BitcoinQuotation.com paves in to become a reliable source for you to learn about what these highly influential people think about Bitcoin and whether the blockchain technology can become something that will change the world entirely like how Internet once did, or fail miserably, stomping on people’s hopes and beliefs.”

There are two sides of each coin, they said, and BitcoinQuotation.com shows exactly that.

The community sees Bitcoin as something magical—something that can start a revolution against the centralized system we have today.

On another hand, the press just loves to accentuate Bitcoin’s affiliation with the deep web, ransomware, or money laundering. But only one question remains. Which side are you on?

Understanding is the key and through BitcoinQuotation.com, you can learn how great Bitcoin is while also embracing its flaws.

From the Winklevoss twins’ inspiring quote, to Warren Buffet’s mean criticism, or even to Lily Allen’s funny little tweet about Bitcoin, you can read it all in here.

And like Tim Draper, investor and the founder of Draper Fisher Jurvetson, once said, “It’s better to be the one encouraging the changing of our own industry than to be the one who gets surprised by it.”

Get inspired for the Bitcoin revolution

So, are you ready to hop on the Bitcoin train and join the revolution or will you stay strong and satisfied with the current financial system? Make your choice.

BitcoinQuotation.com is supported by Bitcoin.co.id, the biggest Bitcoin exchange in Indonesia where you can buy and sell Bitcoin very easily with Rupiah.

With more than 145.000 members registered in the system, and owning the biggest cryptocurrency forum in Indonesia, Bitcoin.co.id becomes the leading Bitcoin exchange not only in Indonesia, but in the whole Southeast Asia Region.

Related News
Top Staking Projects of the Crypto World Today: Report
Blockchain Platform Unveils Partnership to Boost Crypto Compliance
Bitcoin Is Becoming More Valuable to Iranians Amid Tensions With US
The Blockchain Approach to Customer Relationship Management
Grayscale Investments Reports Record-Breaking Year
CME Bitcoin Futures See Open Interest Surge as Global Volume Hits $25B
<div is="sidebar" :sidebar-data="{"promoButtonsI18n":{"crypto-button":{"url":"crypto.btn.sidebar.url","label":"Get Crypto At True Cost\n","text":"Cryptoassets are complex instruments and investments carry a high risk of losing value. You should educate yourself in how crypto-markets work before making any investments. Always invest responsibly and be prepared for the risks associated with investing in or using cryptoassets. This promotion cannot be considered investment advice."},"etoro-button":{"url":"https:\/\/ad.doubleclick.net\/ddm\/clk\/437480595;240556498;x","label":"Try Etoro","text":"Trade on the world’s leading social trading platform (Highly volatile investment product. Your capital is at risk)"},"hitbtc-button":{"url":"https:\/\/hitbtc.com\/?ref_id=5cba0be404aa3","label":"BEST LIQUIDITY ON HITBTC","text":