Crypto markets are inching their way back up this week, despite the $30 mln Bithumb hack and the Bank of International Settlements dismissing Bitcoin’s value

Bithumb, which has fallen from 6th to 10th place for cryptocurrency exchanges worldwide by trading volume, has had about $30 million worth of cryptocurrencies stolen in an apparent hack. Bithumb has temporarily suspended all deposits and payments, noting that they are moving all assets to a cold wallet and will compensate victims of the hack. The Korean Ministry has since launched a probe into the causes of the Bithumb hack, and Bithumb has promised to reimburse all users.

The now-defunct Bitcoin exchange Mt. Gox has now officially entered civil rehabilitation proceedings. As part of the civil rehabilitation, the bankruptcy proceedings have been halted, with the main trustee now ending any further selling of Bitcoins as victims will receive their compensation in BTC rather than fiat.

Crypto enthusiast John McAfee of McAfee Anti-Virus Software and the McAfee Redemption Token will no longer be promoting or working with ICOs due to “threats” from the U.S. Securities and Exchange Commission. The future crypto-friendly presidential candidate had reported earlier this year that he charged $105,000 per tweet, so this announcement could mark a significant loss of income. The SEC has declined to comment on McAfee’s claims.

Lloyd Blankfein, the CEO of Goldman Sachs, said in an interview that the adoption of cryptocurrencies like Bitcoin could occur similarly to how the adoption of paper money replaced gold and silver coins. According to Blankfein, paper money and crypto are alike in that neither has intrinsic value. In other Goldman Sachs news this week, the bank group’s COO revealed that they are looking into crypto trading derivatives.

The developmental-stage stablecoin, “Reserve,” closed their intentionally small seed round this week for a crypto asset that would lock up other crypto assets in a smart contract to provide the backing and stabilization the Reserve token. The project, backed by Peter Thiel, Coinbase, Distributed Global, GSR.IO, and 40 hours, differentiates itself from other stablecoins by using crypto assets outside ecosystem to maintain a peg.

“Due to SEC threats, I am no longer working with ICOs nor am I recommending them, and those doing ICOs can all look forward to arrest. It is unjust but it is reality,” — crypto enthusiast John McAfee, who had charged $105,000 per promotional crypto tweet

“If you think about it, Bitcoin investors — people like myself, and possibly you and others, who invest in Bitcoin — what we’re really doing is we’re saying, “Let me put $1000 into this Bitcoin machine, and I will send it to my future 10 years later,” — Bobby Lee, co-founder of Chinese crypto exchange BTCC and board member at the Bitcoin Foundation

U.S. federal employees will have to report their cryptocurrencies holdings if they equal more than $1,000 or made more than $200 during the reporting period, according to new guidelines from the Office of Government Ethics. These rules will apply to about 2 million employees from the Department of Homeland Security, the Justice Department, Veterans Affairs, and the Army. However, the notice does state that crypto is not a “real currency” or “legal tender,” and will be treated as “other forms of securities.”

The Uruguayan Chamber of Fintech has announced the creation of a special committee to develop a framework for crypto regulation and promote innovation to support the country’s financial system. The fintech chamber is inviting organizations, entrepreneurs, and government officials to collaborate on creating cryptocurrency standards.

Financial services provider Square has received the New York BitLicense, opening up the Bitcoin trading option for New York-based users of its Cash App. The announcement means that Cash App users in every state except for Georgia and Hawaii now have the option to buy and sell Bitcoin.

Crypto entrepreneurs Tyler and Cameron Winklevoss have won a patent for a system that proves crypto-based exchange-traded products (ETPs). The patent represents systems, methods, and program products for ETPs that hold digital assets like Bitcoin and other cryptocurrencies.

Russia’s Sberbank and Alfa-Bank are to begin testing crypto-based investment options for retailer investors as part of the Russian central bank’s “regulatory sandbox.” The crypto products will be based on “digital financial assets” and will include six cryptocurrencies including BTC, BCH, ETH, and LTC as part of an investment portfolio.

The Freedom of the Press Foundation (FPF), a nonprofit aimed at supporting free speech in the media, has begun accepting Bitcoin, Ethereum, Bitcoin Cash, Litecoin, and ZCash. On the first day of the addition of a donate crypto option, the nonprofit received a 1,000 ETH (around $542,000 at the time) donation from decentralized message routing network Mainframe.

A Portuguese software engineers has created a platform —  “Poketoshi” — that allows users to play the popular Pokémon game on the Lightning Network (LN) along with live streaming video platform Twitch. Poketoshi uses a LN-enable virtual controller for entering gaming commands at the cost of 10 satoshis each, paid through the OpenNode payment processor, and users interact with the game via an online chatroom like in the “Twitch Plays Pokémon series.” The use of OpenNode can be seen as a playful way to test the Lightning protocol’s ability to processes a high volume of off-chain instant BTC payments.

IncuBlock, a South Korean blockchain lab, has signed a Memorandum of Understanding (MOU) with a Malaysian government advisory committee to create a blockchain tech platform and DApps that are permissible under Sharia law. Cryptocurrency’s status as either halal (permissible) or haram (not permissible) has been widely discussed, with one Indonesian fintech startup declaring Bitcoin “usually permissible” earlier this year.

Spring, the U.S.’ fourth-largest mobile network operator, has partnered with blockchain startup NXM Labs for the launch of a blockchain-powered 5G connected car platform. Sprint will use the platform and its LTE network to give passengers mobile wifi and vehicle health monitoring as part of the blockchain, IoT security system that protect against hackers.

The Chinese government has partnered with tech giant Tencent for the creation of the China Blockchain Security Alliance, which aims to establish long terms mechanisms for supporting the country’s blockchain development and prevent illegal activities in the space. The alliance is made up of Tencent’s security arm, CTMA, and the China Blockchain Application Research Center, as well as 20 other public and private institutions ranging from government advisory agencies to network security firms and blockchain-related organizations. 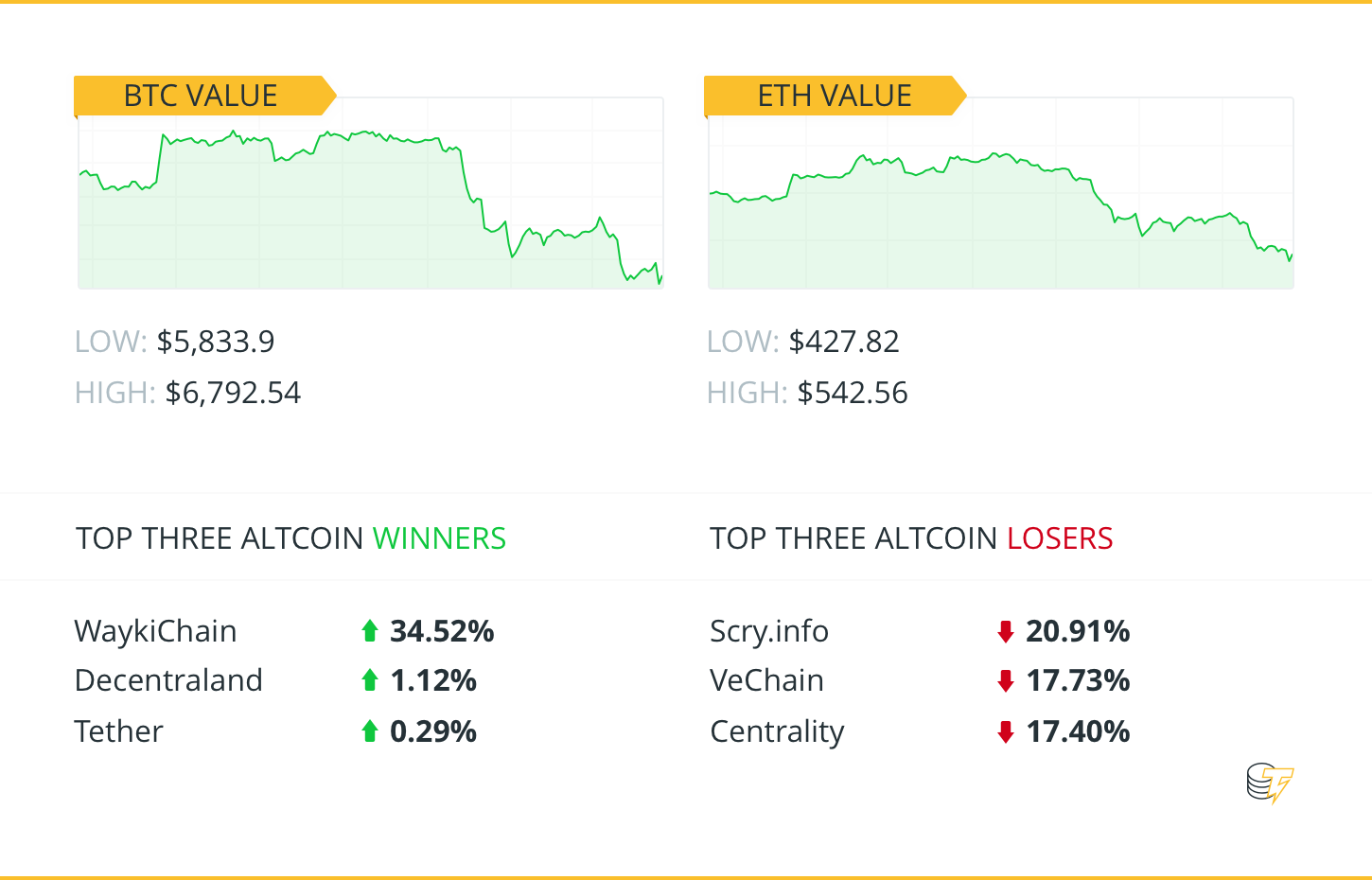 The crypto markets are continuing to fall, with Bitcoin now below $6,000, ETH close to $400, and total market cap around $238 billion.

The Bank of International Settlements (BIS), a Swiss-based organization made up of 60 of the world’s central banks, said in a report that the shortcomings of cryptocurrency prevent it from becoming a medium of exchange in a global economy. According to the BIS, crypto’s scalability is too poor, their value is unstable, and there is a lack of trust in the finality of payments.

A major shareholder of Turcoin, which was advertised as the country’s “national” cryptocurrency, told local media this week that the company that launched the coin “doesn’t have a single dollar in the bank.” While the company had wood investors with luxury parties attended by celebrities, payouts had stopped in early June 2018, prompting a criminal complaint. While the other partner of the company that originally launched Turcoin has allegedly disappeared, the major shareholder has said that he will return the money if the Turkish authorities unfreeze his bank account.

EOS block producers (BP) decided to freeze seven accounts this week that were associated with phishing scams, prompting backlash on Twitter from critics who see the move as violating the EOS constitution. As the EOS constitution has not yet been ratified, the BP’s overrode the EOS arbitration group’s decision not to freeze the funds during a two hour long conference call. Shortly after, BPs were then allegedly ordered by the EOS Core Arbitration Forum (ECFA) to freeze more 27 accounts several days later, with “logic and reasoning” to follow. Twitter has responded negatively, with crypto advocates decrying the ability for a small number of players to make a decision in a centralized manner.

CEO of Spanish bank BBVA, Carlos Torres, said this week that blockchain technology is not mature and faces the challenges of the volatility of cryptocurrencies and potential clashes with tax authorities and financial regulators. However, Torres did concede that the advantages of blockchain tech means that BBVA will need to be ready to use the technology when it matures and the regulators are ready for it.

According to Chris Concannon, the president of CBOE Global Markets, the crypto markets will soon see a crypto regulatory crackdown in two waves: the SEC will first classify ICOs as unregistered securities, rendering investors holding worthless, and then class-action lawsuits will overwhelm the companies behind the ICO projects. In Concannon’s opinion, ICO investors “should lay awake at night” in worry about the future regulatory reckoning.

Todd Gordon, the founder of TradingAnalsyis.com, said this week that Bitcoin will fall to $4,000 before than hitting $10,000 by the end of the year due to market volatility. According to Gordon, Bitcoin’s fall from the January high of $19,000 is “inconsequential” when one considers the gains of the coin since 2015.

The Blockchain Can Fix the Internet

Manoush Zomorodi, host of the tech podcast “Note to Self,” explores the use of blockchain in protecting our online lives and rebuilding trust between citizens and institutions. According to Zomorodi, we are now as a “crossroads” of restoring the balance of power between the “builders and users,” and blockchain’s philosophy may be the key needed to make it happen.

Ethereum Killer? I looked under the EOS hood and here’s what I found

Hackernoon delves into a side-by-side comparison of EOS and Ethereum, concluding that although EOS “wins” in one category (contract features due to the possibility to implement C/C++ libraries), EOS still faces significant barriers in these early days for easy use.

Bitcoin developer Jimmy Song is back, this time defending last week’s article on the “truth” of smart contracts from what he calls his “Crypto-Keynesian” critics. In his response, Song lays out his refutations of a number of what he refers to as fallacies in his critics’ arguments: the assumption that aggregate numbers tell a true story, their faith in central planning, and their certainty that things will go as planned. Song’s response to this “lunacy” of believing success = money?: “The real innovation was and always has been Bitcoin”