Verge has been hacked, again, the US is investigating spoofing and wash trading in the crypto markets, and more in this week’s Hodler’s Digest.

The U.S. Department of Justice has opened a criminal investigation into possible crypto market manipulation, specifically looking at Bitcoin and Ethereum. Unnamed sources told Bloomberg that federal prosecutors will be working with the CFTC to look into illegal price manipulation practices like spoofing and wash trading.

The anonymity-centered cryptocurrency has been hacked for the second time in two months, this time losing 35 mln in XRG (now worth around $1.4 mln) over a period of a few hours. The vulnerability that led to the first hack was apparently not accurately fixed, letting hackers attack the coin again, according to Suprnova mining pool’s OCminer.

The Turkish-owned Shacklewell Lane Mosque in East London has partnered with local blockchain startup Combo in order to set up a Bitcoin and Ethereum wallet for crypto donations during the Ramadan practice of almsgiving, Zakat. The mosque, which has raised around $2,000 so far, hopes to raise around $13,000 for repairs. Earlier this year, a fintech startup reported that cryptocurrency is generally halal, but the topic is still up for debate.

American Express has partnered with online merchant Boxed in the launch of a Hyperledger blockchain application for its Membership Rewards program. The program, which will initially be only with Boxed but will open to almost all merchants in the future, lets merchant increase customer engagement with customized offers of both specific products and to specific customers.

Poland’s Ministry of Finance is temporarily suspending tax collection for cryptocurrencies, after admitting that the current tax framework often caused crypto traders to pay more taxes than the funds that they have invested. The regulatory body has promised to investigate the crypto space and come up with smarter regulation.

India is reportedly working on legislation to make cryptocurrency transactions subject to the country’s 18 percent goods and services tax (GST). If the tax goes into effect, it could be seen as a first step in solid crypto legislation for India.

Cryptocurrency wallet and exchange Coinbase is apparently considering applying for a federal banking charter, which would mean they would answer to one federal regulator rather than a plethora of different state ones. However, an official at the US currency regulator once said that when companies find out what it takes to become a bank, “they kind of glaze over and often leave skid marks leaving the building.”

As part of plans to make France into a “center of excellence” for artificial intelligence, IBM will hire specialists across the fields of blockchain, AI, and the Internet of Things, including 400 research jobs already announced in January.

Political Candidates In Colorado Could Accept Crypto As Campaign Donation

Colorado’s Secretary of State announced plans to allow for the donations of cryptocurrencies to political campaigns. Bitcoin and other digital currency donations, which have already been approved by the U.S. Federal Election Commission, would be counted as csh in-kind donations, with the value determined at the time of the donation.

Norges bank is toying with the idea of releasing their own digital currency that could serve as an alternative to deposits in private banks, a supplement to cash as a legal tender, and a backup for electronic payment system. The working paper on the cryptocurrency idea calls it a way to “ensure confidence in money and the monetary system.”

The Mitsubishi UFJ Financial Group (MUFG) announced a partnership with U.S.-based cloud delivery service Akamai Technologies for their joint global blockchain platform that showed a capability of processing one million transactions per second during a test.

In just one day, Coinbase announced the launch of Coinbase Pro, its new version of the GDAX trading platform, as well as its acquisition of relay platform Paradex. Coinbase Pro is aimed for individual traders, giving users the option of staking and protocol voting, and the Paradex relay platform will operate together until June 29, when all customers will be “rolled over” to the new platform.

Russia’s Sberbank and the National Settlement Depository will work together to pilot an ICO using the Bank of Russia’s regulatory sandbox by the end of summer 2018. The head of Sberbank’s investment banking sector has said the Russian market for ICOs looks “highly promising.”

UN To Work With IOTA On Technological Efficiency

The United Nations and blockchain platform IOTA have signed a memorandum of understanding to focus on bringing efficiency to different parts of the UN, working on cutting intermediaries, offering training workshops, and developing specific proof-of-concepts. 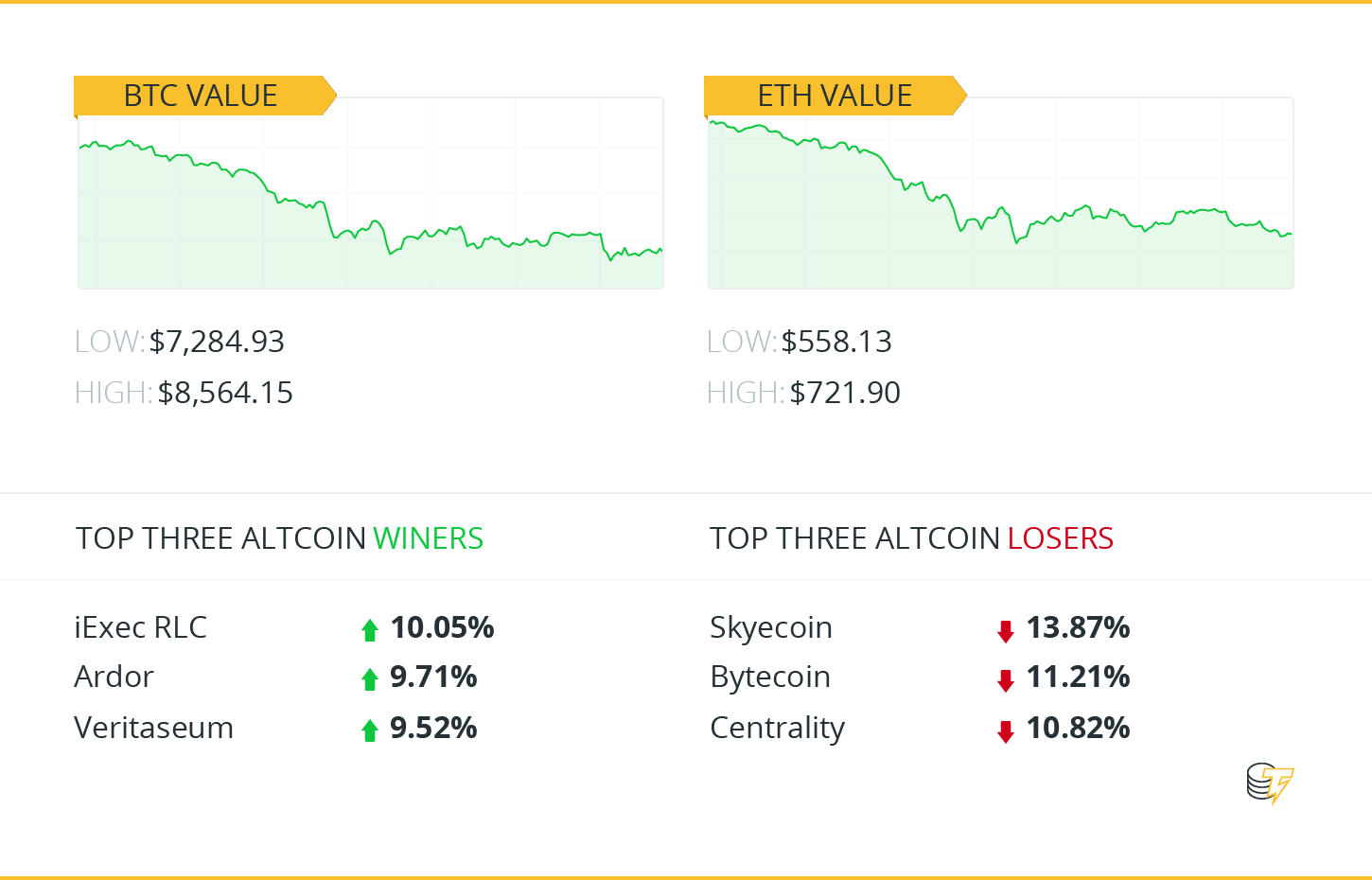 As the crypto markets are taking an unexpected slump this week, BTC is below $7,500 and ETH below $600, and total market cap is around $325 bln.

Holding Bitcoin and other cryptocurrencies could possibly affect candidates seeking security clearance for job applications to the U.S. Department of Defense (DoD) if cryptocurrencies are ruled as foreign currencies. The crypto holdings of a job candidate could potentially indicate criminal intent or a predisposition to risky behavior, depending on what eventual crypto legislation in America will dictate. As the DoD needs to track the around 4 mln people with security clearance, the added step of scrutinizing their crypto holdings could “grow the backlog considerably.”

Ethereum-based blockchain company ShipChain received a cease-and-desist from the South Carolina Attorney General’s Office this week for a violation of the state’s securities laws. The startup has been asked to stop all business transaction and is now “permanently barred from participating in any aspect of the securities industry in or from the State of South Carolina.”

The central bank of singapore has sent warnings to eight unnamed cryptocurrency exchanges about compliance with securities laws, as well as ordering one ICO to halt issuance of tokens. Singapore’s monetary authority has promised “firm action” in the case of a breach of securities regulations.

Even though it now seems like Tom Lee was wrong in his forecast of a market rally last week--as the markets are now down X percent--the Fundstrat strategist has maintained his prediction that Bitcoin will hit $25,000, adding that the ‘move from $8,000 to $25,000 will happen in a handful of days." As for the reasons behind this optimism, Lee cites the relatively low cost of BTC production to mining, an untapped market of institutional investors, and reminds crypto investors to HODL.

“Satoshi is female,” was the apparent vibe at last week’s Blockchain Week in NYC, as more women were both attendees and featured as speakers.

Bitcoin As Explained By A.I.

Watch this completely non-instructive video explainer on Bitcoin that has no bearing on reality, created by AI trained by a variety of Bitcoin explainer.