How Many Americans Really Own Crypto, Skewed Results of Polls and Surveys

A recent survey by Finder.com regarding American cryptocurrency ownership and American sentiments toward cryptocurrency does not provide accurate representations of the American demographic.

A recent survey conducted by Finder set out to find cryptocurrency ownership, interest, and gender distribution statistics for the American population.

However, research indicates that Finder’s survey is not the most accurate representation of cryptocurrency demographics in the US. Let’s look at the numbers.

What did Finder find

And that 29.99 percent of women and 23.63 percent of men believe cryptocurrency is too complicated to understand.

However, the data does not accurately represent the American population. Finder only surveyed 2,001 adults in America, this represents 0.0011 percent of the adult population in America according to the US Census Bureau.

Furthermore, Finder did not use a weighting scheme. Therefore the 2,001 individuals surveyed do not provide an accurate representation of the American population once it is scaled.

A more accurate representation of cryptocurrency ownership and cryptocurrency sentiments in America would have been if Finder weighted the data according to the age, race, sex, education, and geography demographics in the Census Bureau’s American Community Survey.

A joint survey by Global Blockchain Business and Survey Monkey used the weighting scheme mentioned above in a research conducted in January 2018 and were able to produce statistics regarding the cryptocurrency ownership and sentiments of the American Population with a +/- two percent margin of error.

A 2017 survey conducted by LENDEDU set out to find the role cryptocurrency was playing in the American economy. However, in the LENDEDU data, there is no mention of it being weighted, so we can not expect the data to provide an accurate representation of the American crypto ownership. LENDEDU found that out of 1,000 individuals surveyed: 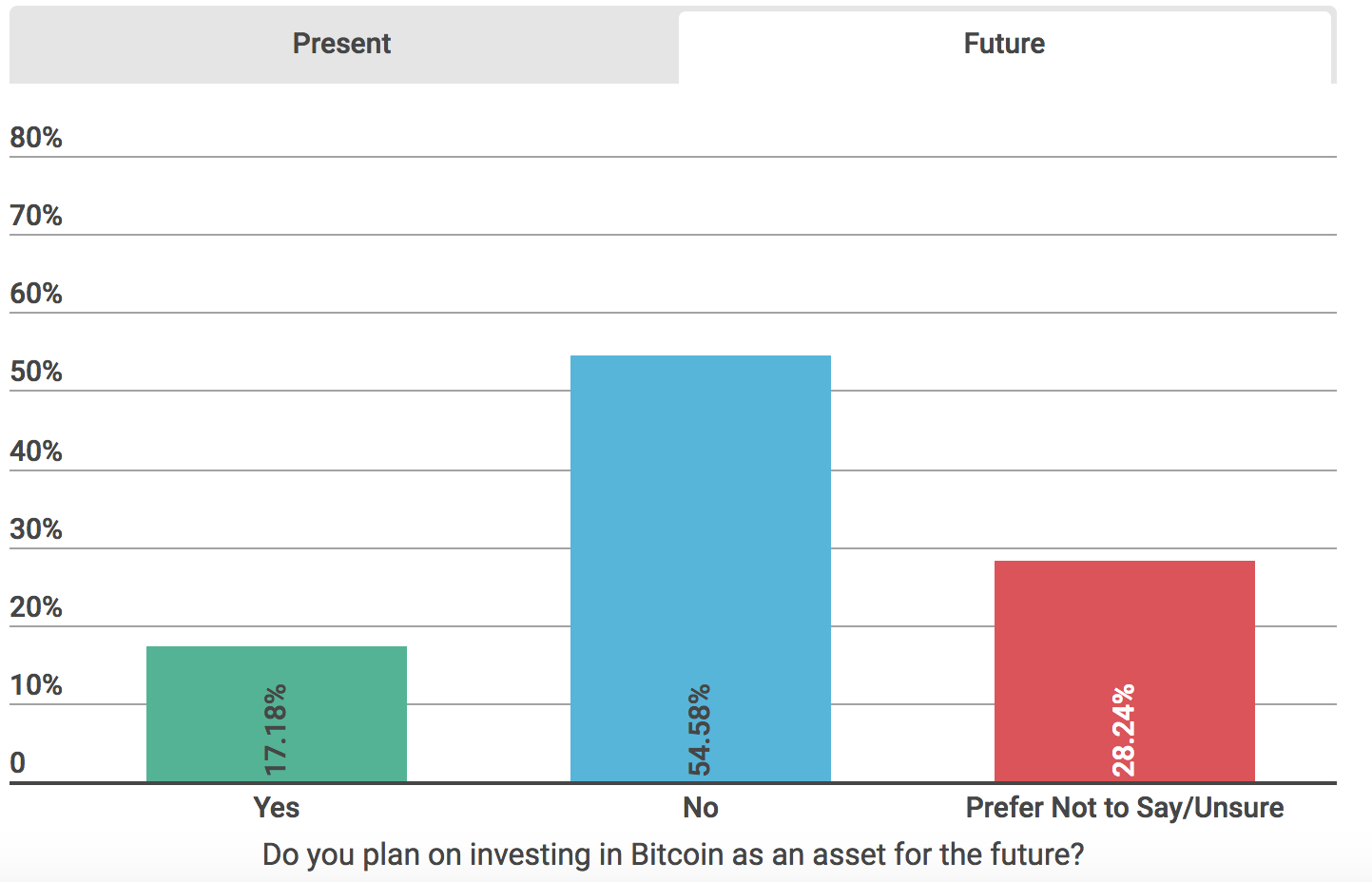 A similarity between the results of the Finder survey and the survey by LENDEDU is that Millennials are the largest group invested in cryptocurrency followed by Generation X.

The survey by Finder found that among those who purchased cryptocurrency there are:

The survey by LENDEDU found that:

Another similarity between the statistics in the Finder survey and the LENDEDU survey was that more males than females own cryptocurrency.

And LENDEDU’s survey found that:

Looking forward to an exemplary survey

We can expect more polling and studies to be conducted regarding different populations sentiments toward owning cryptocurrency and future investing in the future, as the cryptocurrency market continues to grow in size and popularity. But at this point in time, there is a lack of data that provides us with useful statistics regarding cryptocurrency ownership demographics.

In 2016, an unfinished study titled “US Consumers’ Adoption and Use of Bitcoin and Other Virtual Currencies ∗” conducted by Scott Schuh from the Federal Reserve Bank of Boston and Oz Shy from the MIT Sloan School of Management reported that “about one percent or less of US consumers have ever owned (adopted) virtual currency.”

The data in the report comes from the Survey of Consumer Payment Choice- an annual survey of 2,000 US consumers that measures adoption of bank and other transaction accounts, as well as use of payment instruments, including cash.

However, that was nearly two years ago and cryptocurrency did not really gain popularity until the latter half of 2017. If surveyors continue to conduct studies without weighting their findings to the country they are observings demographics, studies will produce inaccurate statistics regarding the sentiments toward cryptocurrency and cryptocurrency ownership, and society will have an inaccurate understanding of the role cryptocurrencies play in economies and households throughout the world.

It is difficult to estimate a minimum and maximum number of cryptocurrency holders via a survey. Even if we had data that told us the total amount of cryptocurrency wallet addresses in the US, so many people have forgotten their private keys, lost or broken the piece of hardware that stored their funds, have signed up for a wallet but have never deposited funds or have multiple wallet addresses.

If the sampled population reflects the American demographics then the results of the survey will be relatively accurate when the survey is brought to scale. For example, according to the US Census Bureau, 76.9 percent of the population is white, 13.3 percent is black and 10 percent is other, if a survey with a sample size of 100 wanted to provide an accurate representation of data in America, the survey should question about 77 white individuals, 13 black individuals and 10 individuals who are neither white nor black.

A survey weighted to the American demographics would cause the responses given in the survey to reflect the responses that would come from the different ethnic, gender, and race groups in America and would more accurately represent the sentiments of the American population.