John McAfee has assured the crypto community that he will be launching his own crypto-backed currency at the end of June. 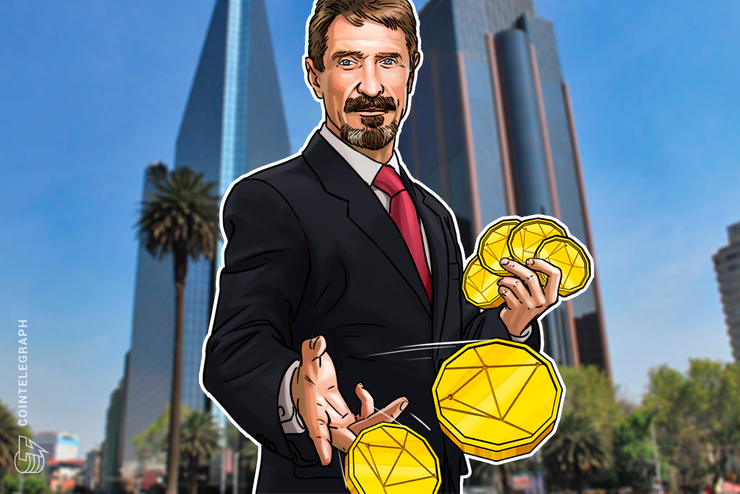 Businessman and crypto advocate John McAfee is releasing his own “fiat” currency backed by cryptocurrency, the McAfee Redemption Unit (MRU), on June 25, according to his tweet from yesterday, May 29.

No hoax. The "McAfee Redemption Unit" is real and coming in 26 days. The graphic is low res - don't want to give much away yet. Printed on currency paper, holographs on both sides, serialized, linked to the blockchain, redeemable, convertible, collectiblehttps://t.co/ySUwkDuW7s pic.twitter.com/75xTje39X8

McAfee — of McAfee Antivirus Software —  had originally tweeted about his own currency on May 28, including a picture of his face on a fiat bill:

. @SmartPayMINT sent this. What's odd is that tomorrow night I am going to make an announcement of the new "McAfee Coin", based on a radical new concept: Fiat currencies (collectible) backed by crypto - the reverse of what banks are attempting. Seriously. pic.twitter.com/3uTHHKG18M

After local outlet Crypto-News India reported on the fake McAfee “dollar,” McAfee then reached out to confirm that the tweet was not a hoax and that he was serious in his intention to launch his own currency.

McAfee told Crypto-News India in a follow-up that the MRU, or McAfee Promissory Note, will be connected to a blockchain by tokens and can be redeemed for up to 100 minutes — depending on the denomination of the note — of personal time with him at a location anywhere in the world.

In order for holders of the note to redeem it for a personal meeting, they must appear at an address in Mexico between the hours of 1:00 pm and 3:00 pm, where they will then receive a date, time, a location anywhere in the world to meet with McAfee.

“My followers are are hugely loyal and I feel certain that many will go through time and huge expense for the opportunity to spend private time with me. See what this might do to the fundamental value of each redemption unit. If the value of a unit is based even remotely on the cost of redemption, which people are willing to pay, then the notes will immediately skyrocket. But the big key is in the way I have structured the auction sites. Cannot tell you more now.”

In the case that a holder of a McAfee Promissory Note wants to convert the note rather than redeeming it, he or she will send it to the MRU Foundation where its value will be sent to the holder’s crypto wallet.

McAfee notes that 341,000 different denominations have been printed, with 6.05 mln redemption units. Each MRU is currently worth $9.95, and the printing plates for the currency have been destroyed, preventing printing of any additional bills.

McAfee had also made headlines in February when he reported that he charges $105,000 per tweet to promote cryptocurrencies and blockchain projects.