In a recent interview with Success Council, Bitcoin core developer Mike Hearn expressed misgivings about the currency’s stability – but they’re not cutting much ice in community, it seems. 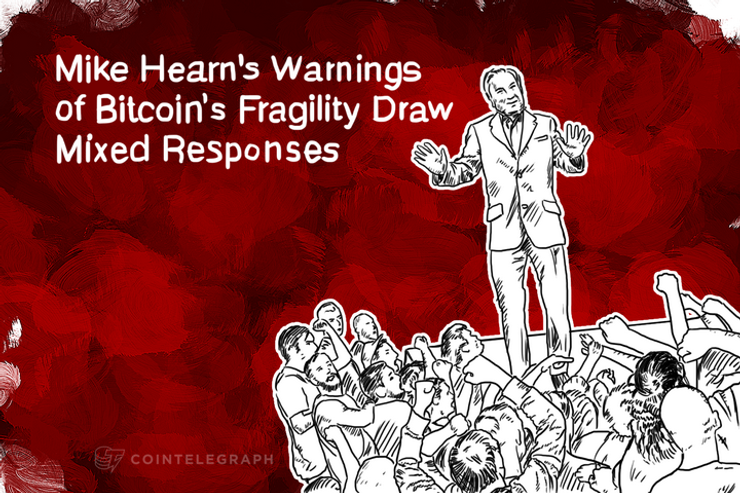 In a recent interview with Success Council, Bitcoin core developer Mike Hearn expressed misgivings about the currency’s stability – but they’re not cutting much ice in community, it seems.

The concept of the Bitcoin evangelist is now a household term for almost anyone with any involvement in Bitcoin. Although the extent to which members of the community propagate its benefits vary, it is safe to say that the ‘to the moon’ mentality is becoming more and more entrenched in the psyche.

Cryptocoinsnews reports however that it is precisely this mentality that Hearn, whom it describes as “closer to the source” than anyone in the field, thinks is actually harming Bitcoin itself.

“I guess in a sense I am bullish,” he says in the interview, “but there’s a lot of people in the Bitcoin community that just pump and hype all the time.”

What makes Hearn nervous about those people? “We remind people [that Bitcoin is in beta] because we know what the code looks like,” he says, adding the foundations of Bitcoin being able to support its current size still takes him by surprise:

“It’s pretty terrifying how big this thing has become on such a shaky foundation.”

His words may not have been expected by many punters, especially since the suspicion and lack of trust in Bitcoin held by many disinterested consumers remains commonplace. From the perspective of his position close to the Bitcoin Foundation, however, his level-headedness should perhaps be greeted with open arms. Given its checkered history, it could be argued that the last thing Bitcoin needs now is those who spearhead it having their head in the clouds with a blurred view of the moon.

“We work with it every day, so we see the limits and the warts and the fragility and stuff,” Hearn adds candidly.

But there are more concerns. Funding for the upgrades required to sustain Bitcoin’s growth is coming solely from the Foundation, as is the manpower in the form of Gavin Andresen and two other developers, something which Hearn suspects will not be workable for much longer.

“I worry about the system running away from us and just becoming so widely used and valuable to attack that the little developers running to catch up can’t, you know, reinforce the walls quickly enough,” he admits.

He should know, but the community response has been surprisingly ‘optimistic’. Cointelegraph posted Hearn’s sentiments on Facebook and the feedback, which you can see here, was not in line with Hearn himself.

“It's still early days,” Will Pangman of the Bitcoin University Project commented. “… Things are accelerating in crypto-currency awareness -- we need more people in the economies and all boats will rise.”

“One only need to look at the huge amount of forks or inspired tech that are faster or possibly more energy efficient to realize that the software engineering org around bitcoin the reference client appears to lack innovation absorption capabilities at a very early stage of the technology's lifecycle.”

Certainly, the concept of ‘limitations’ when it comes to Bitcoin are a sore point indeed, and one which will need to be handled delicately. For Hearn, however, the view is crystal clear, and hardly gloomy.

“I think things are going OK,” he concludes modestly.

I think he's right. We shouldn't be loading the poor into being long BTC.

“It’s still early days. It very much feels to me like it did in 1994 when "dot-com" opened up for commercial registrations and the whole ISP revolution kicked up. In those days I was answering questions like "what is email? what is a web-page? why would i need one?”

“I think we should stop talking about Bitcoin being instant and free with no middle men. Bitcoin takes up to an hour (on average, most of the time, with exceptions) for a secure transaction, there are mining fees which you have to pay else your transaction risks getting lost, and you pay the mining fees to the middle men (miners). Also it is centralised in that there are fewer core developers than central bankers in most countries, and they can do a lot to persuade miners / nodes to use their updates.”

What do you think? Is Bitcoin growing on shaky ground? Can the open-source code be improved? Head over to Facebook and join in the debate or comment in the comments section below.