It’s been around for some time now: a new international bank is coming to town, named NextBank. It looks and feels like either a miracle or a scam. 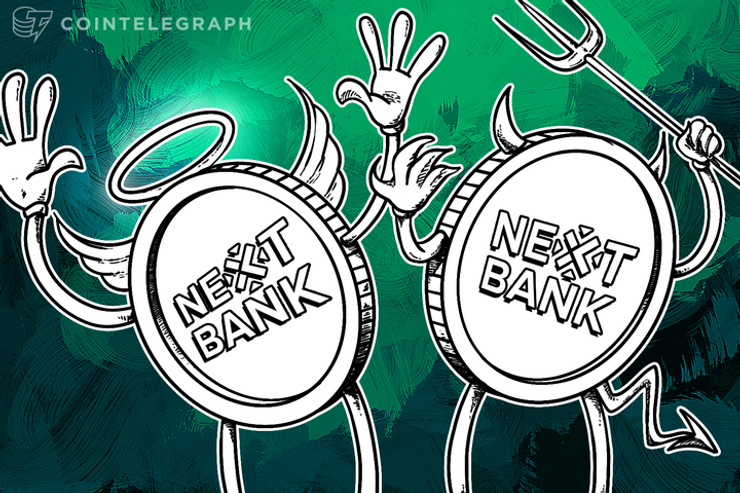 It’s been around for some time now: a new international bank is coming to town, named NextBank. It looks and feels like either a miracle or a scam. That’s why Cointelegraph conducted a survey with experts from the banking industry to investigate the truth.

Legendary future of the new banking

A short introduction to the project, NextBank. They promote themselves as they will allow you to store value in 135 FIAT currencies, precious metals and, of course, cryptocurrencies. NextBank will offer a wide variety of services like international debit cards and escrow service, in reality, it claims that it will offer ALL the services you can think a bank can offer. On top of this, it will also have a help desk in 50 and more languages.

NextBank, based in Vanuatu, an archipelago nation east of Australia, is planning to obtain the necessary operation licenses in the beginning of the next year.

The NextBank Foundation Company is registered in Vanuatu with company registration number 300104. That is what we know from the press-release. It’s a beautiful tale to read.

But who is NextBank? Opinion of experts

We contacted Luca Dordolo, one of the first Bitcoin entrepreneurs in Italy and long time politician, bitcoin consultant for Kryptomith Ltd, who had a direct contact with the organization.

He was pretty excited about this new, fully featured bank coming onto the market:

“I firstly knew about NextBank a couple of weeks ago and considered the project to be really amazing. I read an article at first, then I connected with their website and finally I decided to contact their press center. It is very strange that a project that claims to give services in 50 different languages have their press center only in english, this was at first suspicious to me.”

He then dug deeper into the available information and options on the website, only to uncover that the whole project looked inconsistent.

“I was thinking to invest a few thousand Euro on it, but soon realized there was no real consistence in that project.

No software, no details on how they want to open and start, no bank licenses (they say they will apply for a Vanuatu license in Q1 of next year). At last only one person, Simon Peltin, very kind and polite, got back to me but was not exhaustive enough in his replies.

Peltin replied their main shareholder is from Austria and that we could arrange a meeting only in the future (but we are really only few hours by car from Wien).”

After gathering more info, and landing on a Reddit thread Luca realized that there are only two options: “it’s only a scam or, in the best case, a beautiful pipe dream of a youngster with no financial experience”.

Luca then informed Peltin about the thread and received a lapidary answer stating that it is up to him to buy shares or not, and that it’s up to their managers to arrange any kind of meetings and discuss any kind of cooperation, also giving a link to their answer on Reddit.

Mr. Dordolo abandoned the newborn bank bitterly, stating that “this project will take too long to stand up alone. It's a pity... probably it is not yet time to move big whales to invest in such an ambitious, innovative financial project.”

They need $490 million to start a bank in 7 countries

To get a clearer picture of the situation, we also contacted another person, Simon Dixon, CEO of BnkToTheFuture & Fund Manager at Bitcoin Capital, he’s working since a long time in the financial industry. We asked what he thinks about the NextBank project.

After reading the PR release, he answered:

“I do not know anything about this company, but if I were sent a proposition to invest in a new bank to launch in 7 different countries in 2016, I would start by asking to see 7 different banking licenses just to start my due diligence process. You have to have a banking license in each country you wish to operate in, just to use the word ‘bank’ in your name or you have to have permission from the government and regulator. If they did not produce them then I would end my due diligence there and move on.”

We asked Simon if he thought that somebody without at least ten years of experience in banking could successfully launch a thing like NextBank, he answered:

“New banking requires new thinking and old bankers create old banks, but to understand how to create a new bank you will need an exceptional understanding of what is wrong with the old banks and probably have to have worked at one to gain such experience. Saying that the definition of what is considered a bank is getting more and more grey as more FinTech companies chip away at what used to be known as a bank. If you are talking about basic loans and deposits then a very good understanding of the risk model underpinning the bank would be required. Are they operating fractional reserve or full reserve banking? If full reserve, how do they make money? If fractional reserve how do they protect depositors money?”

Finally, he also told us that the funds expected to be raised look far too small to what would be necessary for a project of such scale:

“To launch a bank in one country I would want $20m just to submit the application to the regulators and another $50m to meet reserve requirements. If I were launching in 7 countries, multiply that number by 7."

A Certified Anti-Money Laundering Specialist (CAMS), Certified Fraud Examiner (CFE), and Anti-Money Laundering Certified Associate (AMLCA), student advisor at the Northeastern University College of Criminal Justice, who prefers to remain anonymous, has worked for 20 global banks and is an advocate of digital currency and access to financial services for the unbanked. He told us his opinion on the NextBank project as well:

“There is no way anyone can pull this off, certainly not in the timeframe they've outlined. Financially, logistically, and operationally, this is highly improbable.

From a compliance perspective, I would have expected such a large-scale, massive undertaking to have immediately named a CEO and chief compliance officer. There are way too many complex layers of regulation to work through.

I'm not prepared to go on record, but I'd say this is looking like a scam.”

Related News
The Strange Case of CCN and the Google June 2019 Core Update
Blockchain Platform and Exchange Want ‘Open Financial World’
FCA’s New AML Regime – UK’s Crypto Market Will Have to Adapt in 2020
OneCoin Crypto Ponzi Scheme Used Fake Reviews to Improve Its Image
Investigators Bust €6 Million Bitcoin and Gold Fraud Scheme
Governments Begin to Roll Out FATF’s Travel Rule Around the Globe
<div is="sidebar" :sidebar-data="{"promoButtonsI18n":{"crypto-button":{"url":"crypto.btn.sidebar.url","label":"Get Crypto At True Cost\n","text":"Cryptoassets are complex instruments and investments carry a high risk of losing value. You should educate yourself in how crypto-markets work before making any investments. Always invest responsibly and be prepared for the risks associated with investing in or using cryptoassets. This promotion cannot be considered investment advice."},"etoro-button":{"url":"etoro.btn.sidebar.url","label":"Join eToro","text":"Crypto assets are a high-risk investment. You should consider whether you understand the possibility of losing money due to leverage. None of the material should be considered as investment advice."},"hitbtc-button":{"url":"https:\/\/hitbtc.com\/?ref_id=5cba0be404aa3","label":"BEST LIQUIDITY ON HITBTC","text":"Note that all trading strategies are to be used at your own risk. Before trading, we recommend to make sure that you have a clear understanding of cryptocurrencies and how they are traded."},"changelly-button":{"url":"https:\/\/changelly.com?utm_source=cointelegraph&utm_medium=referral&utm_campaign=changellyctengbutton&ref_id=le9ssi8dgmskmqu0","label":"BEST RATES ON CHANGELLY","text":"This is to note that you should realize all crypto trading risks. Please make sure that you understand how crypto exchange service works."},"nexo-button":{"url":"https:\/\/nexo.io\/?utm_source=cointelegraph&utm_medium=fixed&utm_term=content&utm_content=crypto_banking_account&utm_campaign=nexoeverywhere","label":"CRYPTO BANKING ACCOUNT","text":"Cryptoassets are complex instrumen