On The Road with the Bitcoin Bus: The Bit Mom’s Journal (Part 5) 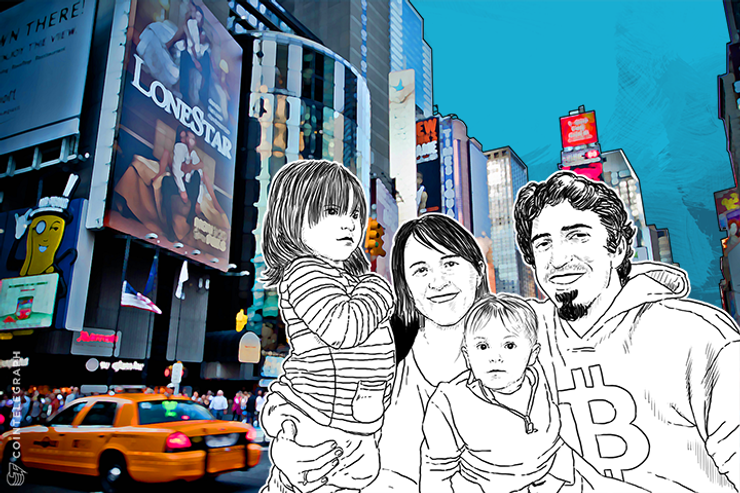 Catherine Bleish, MPA (@thebitmom) on her family “Uncoinventional Bitcoin Bus Tour” across the USA. The self-styled “Blush Family” - John Bush, Catherine Bleish and their two children traveled from Philadelphia to Texas using only cryptocurrency for payments.

I always feel bittersweet when we leave New Hampshire. I feel so at home there, and so loved. Alas, we had successfully picked up The Bitcoin Bus, had our sponsor logos applied, and our brake lines replaced - we were Texas bound and high on life.

Our first stop after departing The Free State was supposed to be a meetup in New York City. Little did we realize that we would have several over-winter issues to shake out before we could really get any southbound momentum.

We left the mechanic in Keene, NH and stopped at a Home Depot in Vermont to pick up a new water filter for our "house" plumbing. We knew one of our shower pipes had been damaged from rubbing against a tire, but we figured we could get the kitchen sink operational before we drove across the continent.

We went into Home Depot as a family so the children could pick out some houseplants for the bus. We wanted them to feel at home as soon as possible, and I knew we would need greenery to filter the air because the bus had sat dormant for so many months. We bought a Home Depot Card with bitcoin through Gyft and John got to work.

Several hours and later, the water was still not working and we were falling behind schedule. We were sent to a second Home Depot to get a part that would fit better and suddenly we had lost the entire day. On top of that, our freshly repaired brake line sprang a brake fluid leak!

John kept the brake fluid filled and we made plans to find a mechanic asap. Our second night on the Bitcoin Bus was spent "boondocking," or parking for free, at a truck stop in Connecticut. We found a few of the cold air leaks we missed on the first night and settled in for a camp-like overnight experience.

The next morning we woke acutely aware that we were in need of gear if we were to survive a trip back to Texas in this bus. We slammed granola bars for breakfast then b-lined it to the closest Target we could find.

We needed groceries, a camp propane burner so we could cook (we could not connect the propane stove in our kitchen due to a missing bracket on the bottom of the bus), and floor rugs to keep us Texans from freezing in the NE spring nights.

Fully loaded, we were finally ready to head to New York, three days behind our original schedule. At this point our MeetUp host had other things to do, so we figured a drive-by bitcoin dinner with bitcoin fans was in order. Then we hit NYC traffic.

It took over 4.5 hours for us to cross the Washington Bridge. We were taking a coastal route as we headed south so we could go through a less mountain path to Asheville, NC. Big mistake, the traffic delays prevented us from stopping in NYC at all.

John topped off the brake fluid after we finally crossed the bridge and we made arrangements to park and sleep at the home of our friends' James and Christina Babb. Poor John drove until about 3am.

The next day John spent about 10 hours trying to fix the brakes himself. The mechanic we saw in new Hampshire apparently cross threaded the brakeline (screwed it in crooked) causing the leak. Easy fix we thought, right? Wrong.

After a day of trying to fix the problem, John decided to use a sealant to stop the leak. We hoped this would work, but felt u easy about passing through the mountains even if it did work. John tried the sealant and it worked to stop about 99% of the leak.

We decided a mechanic was needed in Philly so we could safely maneuver the North Caroline mountains, and we opted to stay another night.

At this point I lost it. In tears I called them back and basically begged for a favor. They refused. We decided to skip Asheville and head straight for Missouri. At this point we had spent 3 extra days in Pennsylvania and we were running out of time to get back to Texas.

We ate dinner with the Babb family and said our goodbyes around 10 pm. We were ready to move forward, no matter how late at night we had to depart!