Students can now use Bitcoin to pay for tuition in Prague. The CEVRO Institut University in Prague has become the next university to accept Bitcoin. 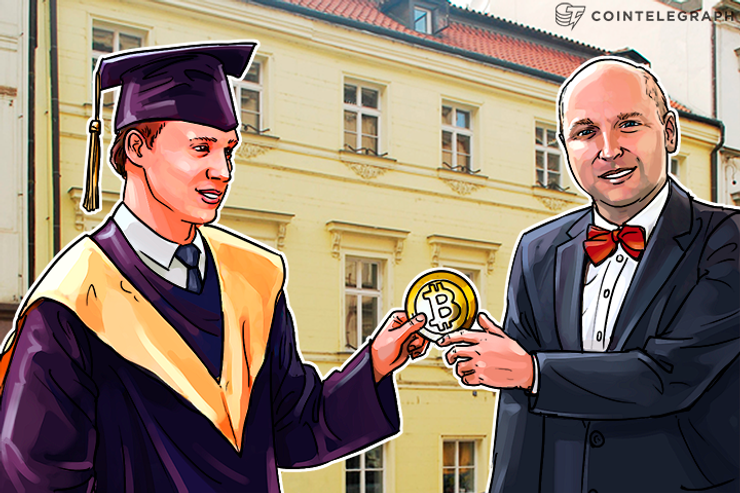 Students can now use Bitcoin to pay for tuition in Prague. The CEVRO Institut University in Prague has become the next university to accept Bitcoin, following the Greek University of Nicosia, Draper University in California, and the University of Cumbria and King’s College in the UK.

Prague boasts one of the largest and most innovative cryptocurrency communities in the world. Not only can you study there using Bitcoin, but it also happens to be the city where the first pool was founded and the first hardware wallet was created. Bitcoin-only coffee is on sale, and the city is home to people who have inserted chips in their bodies to store private keys.

It makes sense that one of the first universities in the world accepting bitcoin is in Prague. Professor Josef Šíma, rector of the university, explains what led him to the idea of accepting Bitcoin:

“As a first school in the Czech Republic we have opened unique Oxford style PPE (Philosophy, Politics, Economics) taught by a team of Czech and foreign professors in English and accepted many foreign students from US and Canada to India and China. One of them asked about the possibility to pay his tuition in bitcoin. And because we have hosted in past several lectures and conferences about this exciting new phenomenon and as a part of the PPE, and we will have courses dealing with alternative monetary schemes, free banking and cryptocurrencies, it was a really easy decision.”

The PPE program of the university is testament to the close connection between Bitcoin and modern studies of institutional change and policy reforms. The cryptocurrency question is a natural part of debates about limits of markets, individual liberties and state regulation. In addition, since the most well-known school defending entrepreneurship is the Austrian School of Economics, students can specialize in this school of thought and thus not only user Bitcoin for tuition payments, but also find it questioned in economics and political philosophy exams.

Students can choose a specialization in Austrian economics and study under leading scholars of this school who emphasize free market competition in money, and thus most of them like Bitcoin.

The accepting of Bitcoin by universities is a great step towards general recognition and serious academic debate about its role in society. One of the purposes of schools is to innovate and try and discuss alternative approaches. Professor Šíma agrees:

“Universities around the world teach students not to be afraid, to go out and innovate, but the schools themselves are often firmly conservative, live from subsidies and lose contact with the progress. Today most of the universities don’t even know that there is such a technology. We are always more than happy to push the limits and offer our students what they can’t find elsewhere.”

“Now you can pay your tuition for CEVRO Institute’s PPE master’s program in bitcoins. We are among the first universities in the world which offer this choice to their students. We are proud to be among such schools as British King’s College or the University of Cumbria.”

The tuition fees in Bitcoin are calculated to be the same amount for non-Bitcoin payments, based on the current Bitcoin market exchange rate.