Dash is in the treadline, Bitcoin Cash is losing it. See what else.

248090 Total views
Price Analysis
Own this piece of history

When the price rallies unabated and seems to be able to reach the moon, we can be certain that a short-term top is around the corner. Can I pinpoint the top? No!

Can the market continue higher and make me look like a fool? Yes, it certainly can!

However, cashing in profits, especially after such a vertical run is a good strategy. I believe, it is time for Bitcoin investors to start booking partial profits on their investment positions. They will get ample opportunities to re-establish long positions at lower levels when the correction starts.

The introduction of Bitcoin futures trading in just a few days will bring forth a number of short sellers who are likely to bet against the incessant rally. For the first time, the Bitcoin bulls will be face to face with the bears, who will have the tools to short sell the cryptocurrency.

It is difficult to predict whether the short sellers will force price downwards leading to a long liquidation or the bulls will force a short squeeze from the bears. Considering the uncertainty, it is wise to reduce the risk.

Let’s see, when should one start selling the positions.

Since the low of $5450.86, on November 12, only one strategy has worked for Bitcoin, i.e., buy and hold. Traders who purchased at the lows are sitting on about 150% profits in less than a month.

However, I never anticipated such a stellar rally. I kept waiting for the dip or a consolidation that could provide an attractive entry opportunity, which never materialized.

Going back two years, we find that whenever the RSI reaches close to 89 levels, it has led to a correction, though not immediately. The current rally has pushed the RSI to the same overbought levels, which warns us that a correction is approaching.

Where can we expect Bitcoin to top out?

The target of $15252.86 is about 12% higher from the current levels. I would be wary of holding on to the currency to squeeze out the last few dollars in the trade.

I recommend booking partial profits at the current levels and trailing the stops on the remaining positions according to individual risk appetite. For the traders who are sitting on the sidelines, I suggest waiting, until we get a decent correction and a low-risk trading opportunity.

In my previous analysis, I had forecast a pattern target of $652 for Ethereum. A few readers believed that the level would be reached in December of this year itself.  Not likely. The ascending triangle pattern has formed over a 7-month period. Therefore, it may take even two to three months for Ethereum to reach its target objective. Another thing to keep in mind is that not all breakouts reach their desired targets. Therefore, traders should always protect their positions with a trailing stop loss.

The rebound from the $388.55 was strong. However, the cryptocurrency could not break out of the $480 levels.

Ethereum has broken below the 20-day EMA. It has a strong support between the $388 to $400 levels. I expect this level to hold.

Nevertheless, I don’t see any buy setups at the current levels. I will be waiting for the digital currency to show strength in the next couple of days before suggesting any trade.

I had suggested a long position at $1420 in my previous analysis. The position got filled on December 01, but the pullback stalled at the $1622.99 levels on December 03. With Bitcoin garnering all the attention, the altcoins haven’t been able to find any buying support from the bulls.

As a result, Bitcoin Cash has broken down of the 20-day EMA, which is a bearish development. However, as it is still quoting above the critical support of $1180, I suggest holding on to the position.

Nevertheless, I propose to raise the stop loss from $1120 to $1170, just below the intraday low of November 30, because, below this level, Bitcoin Cash will become negative and can fall to $854 levels.

The cryptocurrency will gain strength once it climbs above the 20-day EMA.

I had advocated a long position at $0.251 for the aggressive traders. The position was triggered on December 01 itself. However, contrary to my expectation, Ripple did not rally to the $0.28 mark. 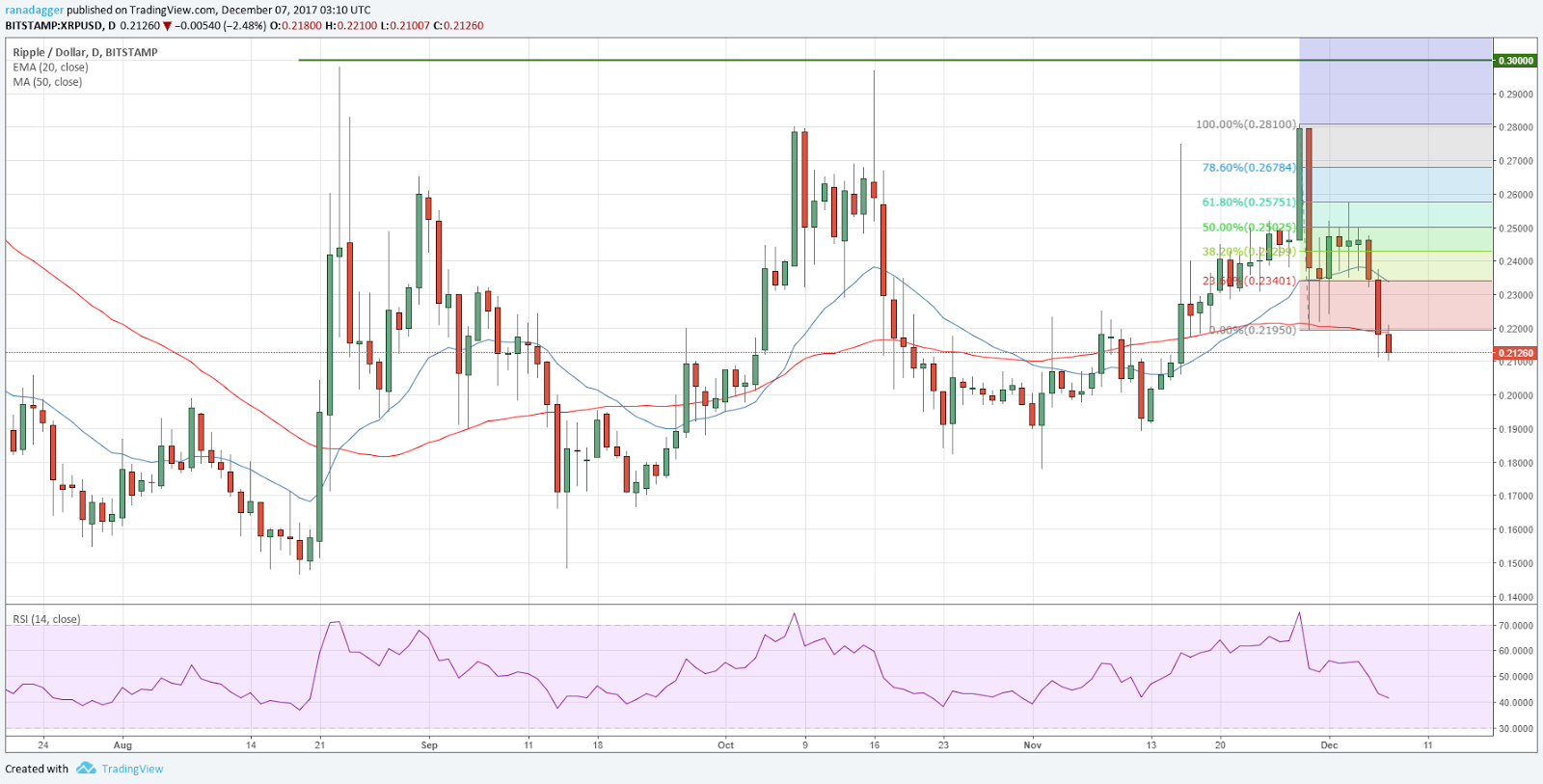 After remaining in a range for three days, the price broke down on December 05. Yesterday, it broke below our stop loss of $0.2195.

Now, the virtual currency can extend its fall to $0.19 levels.

Litecoin is another currency that is showing considerable strength. It clocked a new lifetime high of $106.334 on December 03. However, it finds it difficult to break out of the resistance line of the ascending channel. The RSI is also forming a negative divergence, which is a bearish development. 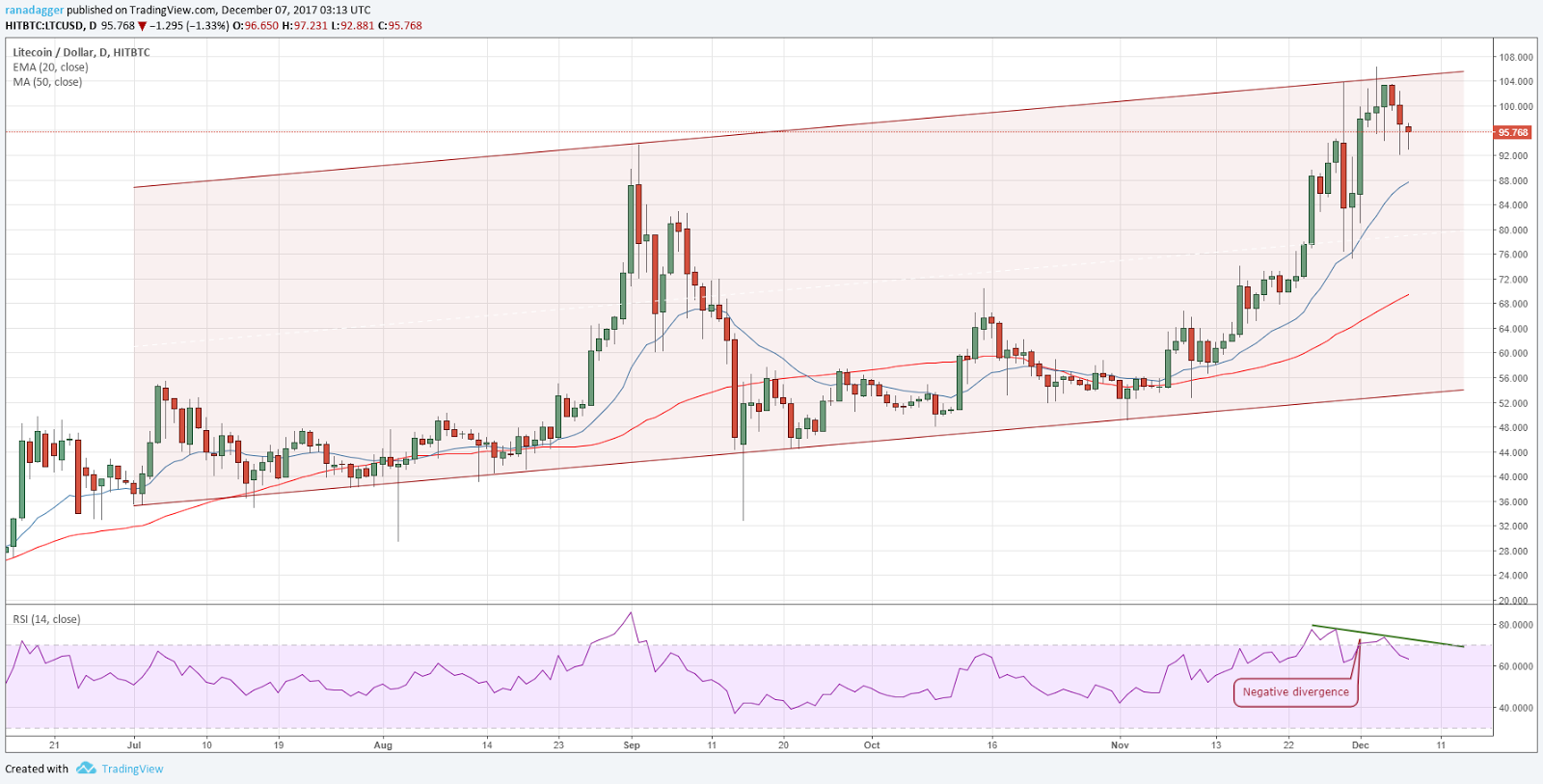 If Litecoin doesn’t break out of the overhead resistance within a day or two, it is likely to fall to the 20-day EMA.

On the other hand, if it breaks out of the overhead resistance at $105, it will continue its uptrend and rally to $125 levels.

As I don’t find any buy setups at the current levels, I am not advising any trade on it.

I had forecast that Dash would experience difficulties breaking out of the ascending channel in the previous analysis, and that is what happened. After consolidating near the highs for three days, the digital currency broke down on December 05.

It has extended its fall and is threatening to break down the trendline support of the ascending channel. The next support is at the 20-day EMA, at $640 and if this level also breaks, the cryptocurrency can fall to $605.66 levels, which is the 38.2% Fibonacci retracement level of the rally from $266.99 to $815.

I will be expecting the pullback to end before suggesting any trade. It is better to remain on the sidelines until then, I believe.

* BTC/USD, ETH/USD, LTC/USD and BCH/USD market data is provided by the HitBTC exchange.