Steem has again taken aim at the blockchain's former validators, executing a soft fork to freeze 17.6 million tokens associated with its previous witnesses.

3646 Total views
138 Total shares
Listen to article
0:00
News
Own this piece of history

Tensions between Steem (STEEM) and the Hive (HIVE) community continue to escalate, with Steem executing a soft fork to freeze up to 20 accounts owned by the network’s former witnesses.

On April 4, the soft fork was proposed in a Steemit post authored by the new account "softfork2288."

In response to the purported “uncertain threat that the leaders and main influencers of [Hive] represented to the Steem Blockchain,” the fork sanctioned roughly “no more than 20 accounts “ that meet three criteria:

The author states that community support for the soft fork is needed in order to “protect” Steem, with the post taking aim at the former top Steem witnesses.

The user emphasizes that 50% of the witnesses were “running a hostile version 0.23” of Steem prior to the hard fork being executed, warning:

“As top consensus witnesses, the duty and task would have been to maintain the integrity of the Steem Blockchain but it was decided to abandon the chain they promised to protect,” the post asserts.

On March 20, Hive hard-forked off from Steem after weeks of growing tensions following Tron founder Justin Sun’s purchase of Steemit Inc and 20% of STEEM supply in February.

The new fork would airdrop HIVE tokens at a 1:1 ration to all STEEM holders with the exception of the 20% founders reward acquired by Sun.

HIVE crashed 50% in one hour

On April 6, the price of HIVE suddenly plummeted 50% over one hour. 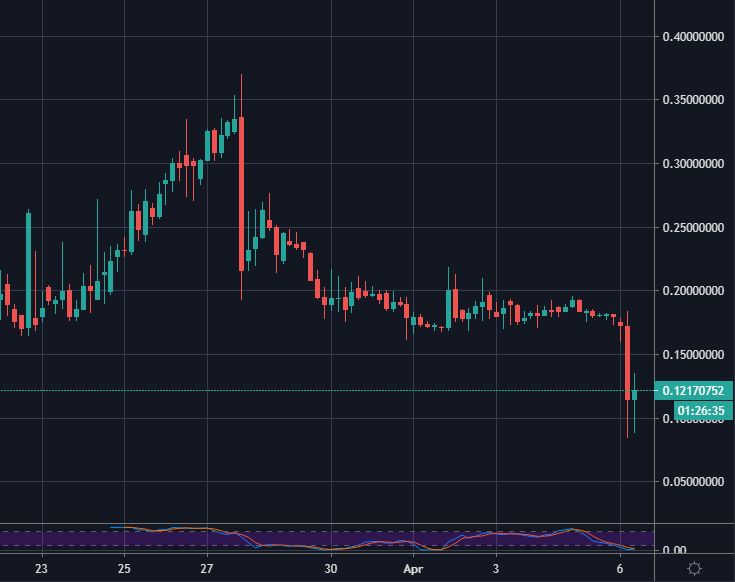 HIVE is trading for $0.125 as of press time. The suspiciously timed dump has driven the price of HIVE below the value of STEEM for the first time since the hard fork — with Steem currently trading for $0.175.