The Alt-Cracks: Altcoin Stories That Slipped Through The Cracks 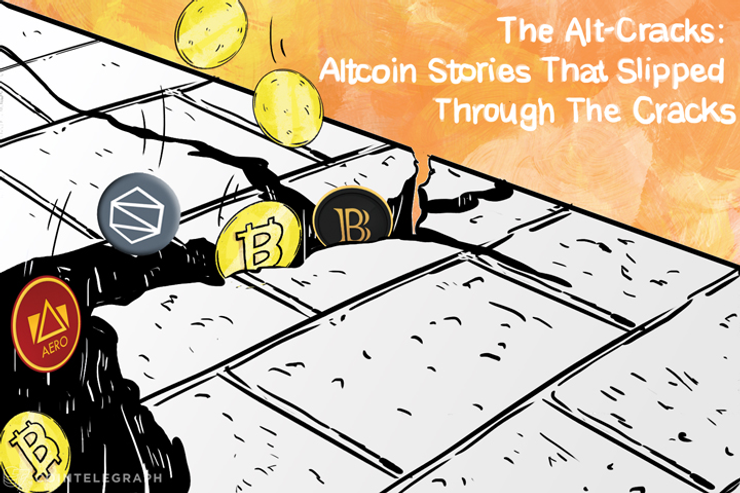 Today we are starting a new feature, The Alt-Cracks. With a near endless stream of altcoins on the market, altcoin related stories are similarly endless. The Alt-Cracks, and yes, we realize the name is a little funny, will be an attempt to pick up all the stories in the altcoin space that either didn't necessitate their own story or for another reason, fell through the cracks.

By no means is it intended as a comprehensive list. The altcoin space is endless. We will miss some stories, and we welcome any leads by altcoin devs, community leaders or users. Likewise, stories covered in their own articles, like the recent Reddit news and Darkcoin going open source, will not be covered here.

This week, we have the Blackcoin team bringing smart contracts to Bitcoin, an update on Sterlingcoin's progress, an online merchant curator launching their own currency and Aerocoin's dedicated developer team rushing to fix some issues.

Workable smart contracts have been Blackcoin's crown jewel since BlackHalo launched a few months back. Its double deposit system ensures both parties will work to resolve any issues and is invested in the contract itself. The problem is that Blackcoin's use isn't as widespread as Bitcoin. The system has great potential for freelancers all over the internet, but the number of employers willing to pay in Blackcoin is limited.

Enter BitHalo. BitHalo allows users to use the same double deposit system using either bitcoin or Blackcoin. It allows users to switch between the two currencies almost seamlessly. An added side benefit of this is the anonymity it brings. Most privacy focused altcoins and bitcoin services address the privacy issue by combining and “mixing” transactions, BitHalo allows users to easily jump blockchains, making it nearly impossible to track. The important part is this:Bitcoin now has a decentralized exchange that uses smart contracts (And the double deposit system) to make third parties (like eBay) unnecessary.

You can read our complete breakdown of BlackHalo when we did our hands-on report a few months back.

Ziftr is an online company that automatically searches the web for the lowest price of whatever it is you are shopping for. It's kind of the Kayak.com of e-commerce sites. As revealed in an interview at Cryptocoins News, they are jumping into the crypto game, not by integrating bitcoin, but by developing their own altcoin, aptly named Ziftrcoin.

It has always long been a dream of the crypto community that companies would eventually use altcoins in a way that grows both the currency and the company. What we have seen so far, for the most part, has been coins being created by developer teams and then trying to get merchant support from there. This is an example of a new altcoin automatically getting some support because of the company launching it.

In the interview, Ziftr said that it is working on getting a network of merchants ready to accept the coin at launch, something they have an advantage at with their close working relationship with merchants.

Ziftrcoin has a distribution model that will turn some off, including a significant premine. However, they are attempting to appear very transparent, and their unique goals may necessitate such an action. 100 million Ziftrcoins are being given out for free and Ziftr has promised to ensure a minimum price for the coins.