Users of the new and free ShapeShift platform can order any products or services from any company that accepts Bitcoin and use altcoins instead to pay. 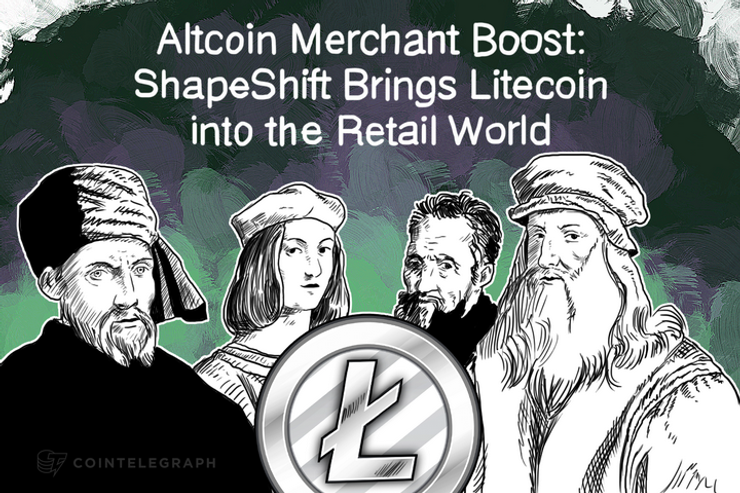 Bitcoin has a huge advantage over other altcoins for one simple reason: Because other cryptocurrencies such as Litecoin or Dogecoin are rarely if ever accepted by merchants for retail purchases. They have been used either for investments or storehouses of value.

Bitcoin on the other hand has recently been added to the payment options of some of the largest retail and services businesses in the world. But now, users of the new and free ShapeShift platform can order any products or services from any company that accepts Bitcoin and use altcoins instead to pay.

It was just last week that PayPal announced that its merchants would now be able to accept Bitcoin, which opens the popular cryptocurrency up to potentially eight million businesses worldwide, and now Litecoin might be able to take advantage of this service by piggybacking Bitcoin.

ShapeShift is a groundbreaking new idea that has the potential to level the cryptocurrency playing field. To date, Bitcoin has held its dominance because of merchant acceptance and by being first on the crypto scene. Butthe fact is that Litecoin is much less cumbersome to use unless you are buying a new Mercedes Benz or Lake House.

Litecoins were designed, according to founder Charlie Lee, to work with smaller purchases, and to supplement, not replace Bitcoin. Meanwhile, Bitcoin serves perfectly for larger purchases and as a secure asset storage vehicle. ShapeShift, however, allows its users to store assets in Bitcoin and spend them using the more liquid Litecoin.

ShapeShift Founder Beorn Gonthier is from Switzerland and has been a finance and economics hobbyist for some time. He became addicted to the idea of Bitcoin in 2011 and the idea for ShapeShift came to him in February of 2014. He quickly realized that the task of setting up different accounts and buying various coins was simply too difficult for most people and that there needed to be a way to buy one coin while being able to spend them across a wider spectrum of coins if desired.

According to its founder, ShapeShift does not deal with fiat currencies in any way. The company keeps a supply of various coins, distributing them as needed. Thus, it is a consumer oriented trading platform that acts as an instant exchange and payment platform simultaneously. If a customer has Litecoin for instance, they will trade Bitcoin to ShapeShift and ShapeShift will first make the trade and the pay the merchant in BTC. Large orders do however require a single step confirmation process.

Since fees are always an issue, so Gonthier explained the charges that users may incur:

First, our system is looking around the various altcoin markets and determines a price at which we're willing to sell our coins (this is our exchange rate). This price we offer includes any profit we make (so there are no extra fees). However, our profit is not exact, because we're buying coins separately to replenish our reserves if they get low.

So, sometimes we make less, sometimes more, and sometimes we even lose money on a trade. But our algorithms for handling this risk are one of ShapeShift's advantages. Our margins are pretty small though, the site won't really make money any time soon.

Our goal is to ensure that our pricing is always competitive, so if people look around in the market they'll generally find ours attractive. One great advantage of buying on ShapeShift is that there is no price slippage... so if you buy 10 Litecoins you know exactly what rate you get on the full order. A traditional exchange website has slippage, where you may get 2.421 LTC for a certain price, and the next 1.5322 for a slightly worse price, and so on, based on the depth of the market. If you put in a specific bid order on a normal exchange, you will know the price you get, but you may have to wait a minute, or a week, for the order to fill.

ShapeShift employs Gonthier, three developers and marketer as well as a few other team members. Currently still in Beta testing, ShapeShift is currently only exchanging Litecoin and Bitcoin but has plans to move forward apace with adding a full spectrum of virtual currencies to their list. Beta testing is expected to end in October and, if all works well, this new service promises to be groundbreaking.