The payment partnership between Bitpay and electronics retailer TigerDirect has expanded today with the launch of Bitcoin functionality for Canadian customers. 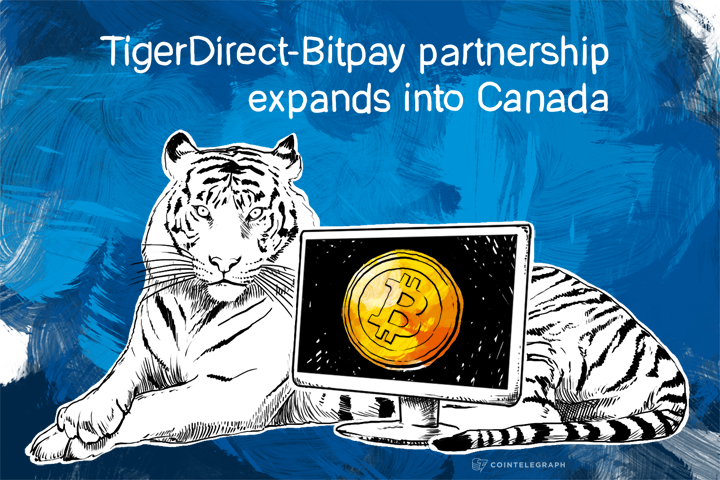 The payment partnership between Bitpay and electronics retailer TigerDirect has expanded today with the launch of Bitcoin functionality for Canadian customers.

In a press release issued Monday, Steven Leeds, Director of Marketing for TigerDirect, confirmed that following success with January’s implementation of Bitpay-led Bitcoin payment in the US, TigerDirect’s Canadian branch is now following suit:

“We are very pleased with our BitPay implementation on TigerDirect.com and are excited to roll it out across our other sites. As of today, TigerDirect.ca and our mobile/ tablet sites will be accepting Bitcoin as a payment method.”

The move is the latest in a successful run for Bitpay, which recently confirmed its appointment of ex-Visa veteran Tim Byun as its new compliance officer, as well as Bitcoin Foundation board member Elizabeth Ploshay as one of its account managers.

TigerDirect is also now well placed to give Bitcoin’s image the known brand backing it needs to achieve increased success among the general populace. Following its earlier decision to make Bitcoin mining equipment on its website, the company is fast establishing itself as a notable pioneer in openly welcoming the next generation of payment possibilities.

“TigerDirect has taken an interest in Bitcoin not only as a payment option but also a new product line through the sale of Bitcoin mining equipment,” said Paige Freeman, Vice President of Sales at BitPay in Monday’s press release. “It is great to be working with an organization who is as just enthusiastic about Bitcoin as we are.”

The implementation for the Canadian market is also set to be a major boost for the country’s Bitcoin economy, which is already at the forefront of exciting innovation but simultaneously suffers from a fairly critical government stance on the issue.

Now, however, with an increasing presence from big-name brands, a following could be fostered which cements Bitcoin’s essential stance in North America.