Bitcoin and Ethereum are likely to consolidate for a few days, leading select altcoins to possibly continue their uptrend.

This week the S&P 500 made news by notching a new intraday all-time high and recovering 100% of the losses caused by the coronavirus pandemic in mid-March.

Despite this, there are signs U.S. stock markets could be overvalued. The Buffett indicator, an analysis tool which divides the Wilshire 5000 Index by the U.S. GDP, currently shows 1.7. This figure is quite near to the dot-com era top at 1.71 which was followed by a strong market correction.

However, one major difference between now and the dot-com era is that the current interest rates are at record lows and central banks have been pumping huge amounts of money to support the economy.

Although certain pockets could be looking like a bubble, it is unlikely that the stock markets will crash because of this metric alone.

If the stock markets did crash, Bitcoin (BTC) might dip initially due to souring sentiment, but the price is unlikely to remain low for long because traders who sold their positions in the stock markets will look at safe haven assets to park their money.

Recent Bitcoin investments by hedge fund manager Paul Tudor Jones and the increased institutional inflow in Grayscale Investments products shows that traders are looking at Bitcoin as a store of value and a hedge against inflation.

For the past few months several altcoins have been strongly outperforming Bitcoin. Let’s analyze a few of the altcoins that could do well in the next few days.

The bulls pushed Bitcoin above the $12,304.37 resistance on Aug. 17 but failed to sustain above it. This attracted profit booking by the short-term traders on Aug. 18, which has pulled the price down to the 20-day exponential moving average ($11,568). 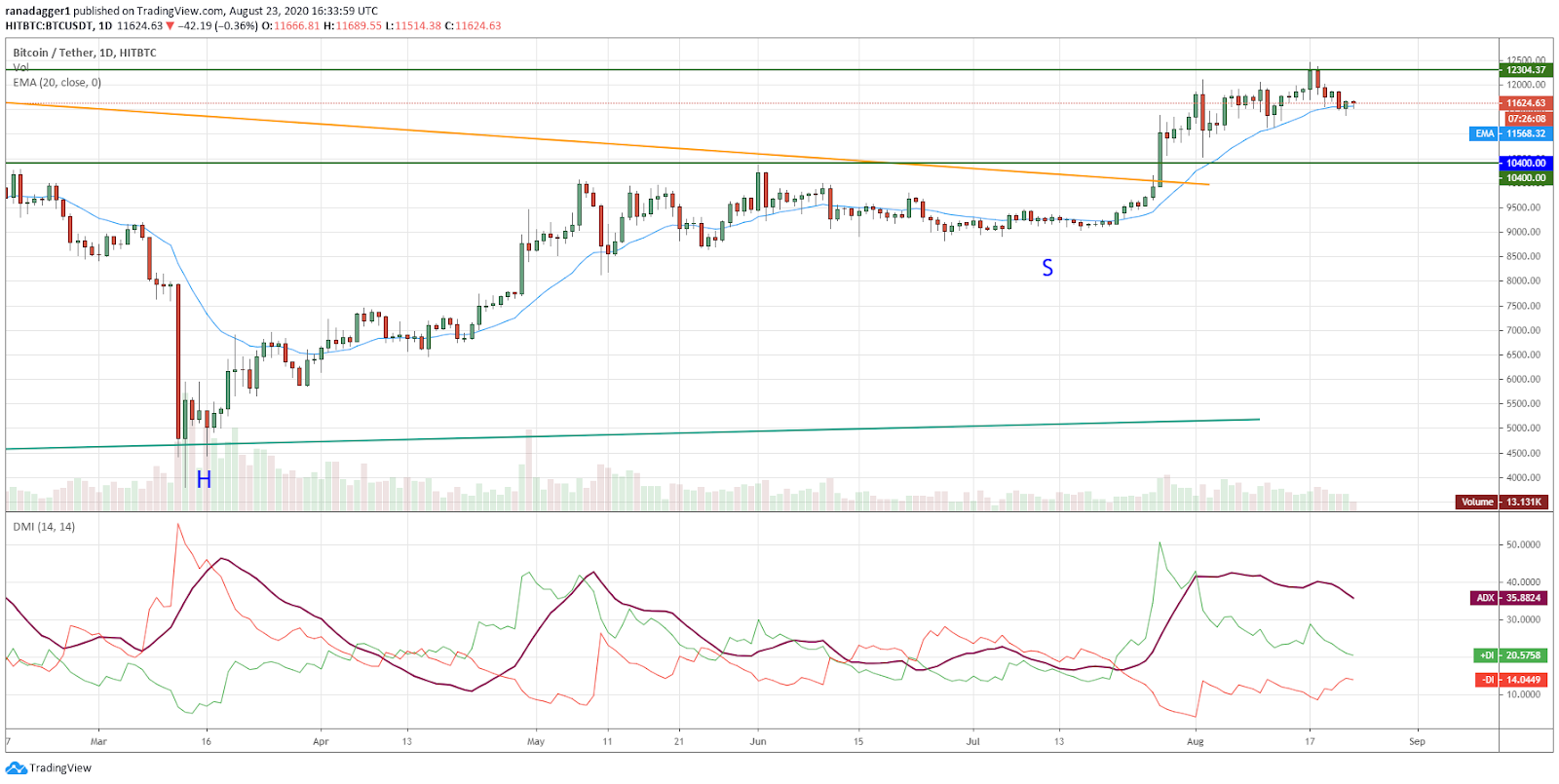 If the bears can sustain the BTC/USD pair below the 20-day EMA, a drop to the $11,000–$10,900 zone is possible. The bulls are likely to defend this zone aggressively and if they succeed, the pair could again rally to $12,304.37. A breakout and close (UTC time) above this resistance is likely to resume the up move.

However, if the bears sink the price below $10,900, a retest of $10,400 is likely. This is an important support to watch out for because if this breaks down, the sentiment will turn hugely negative. 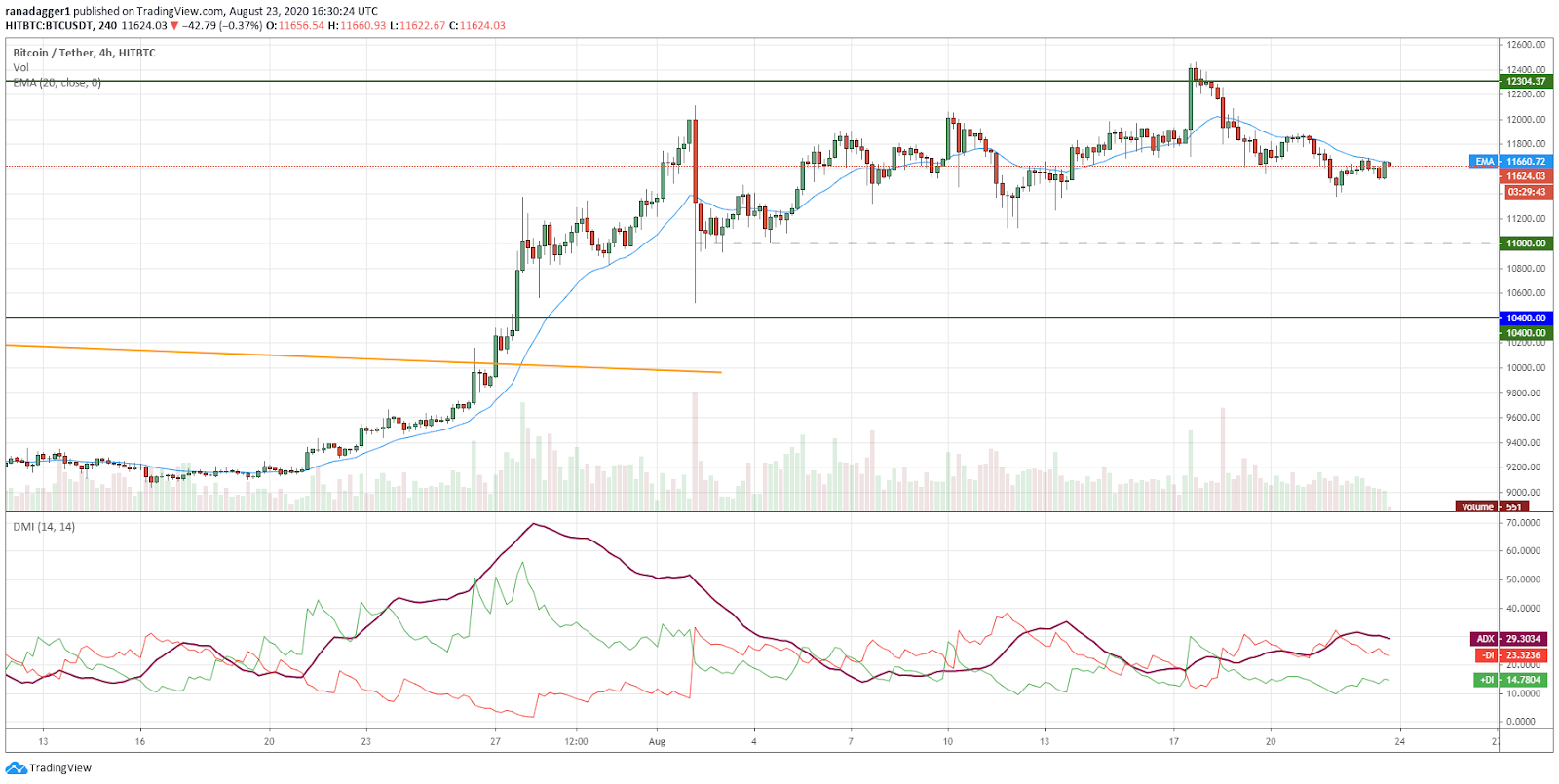 The -DI is above the +DI and the 20-EMA is sloping down on the 4-hour chart, which suggests that bears have the upper hand in the short-term. They are aggressively selling on pullbacks to the 20-EMA.

The first sign of strength will be a break above the 20-EMA as that will suggest a change in sentiment in the short-term.

The failure of the bulls to sustain Ether (ETH) above the immediate support at $415.634 resulted in profit booking by the short-term traders. This has pulled the price below the 20-day EMA ($393), which is a negative sign. 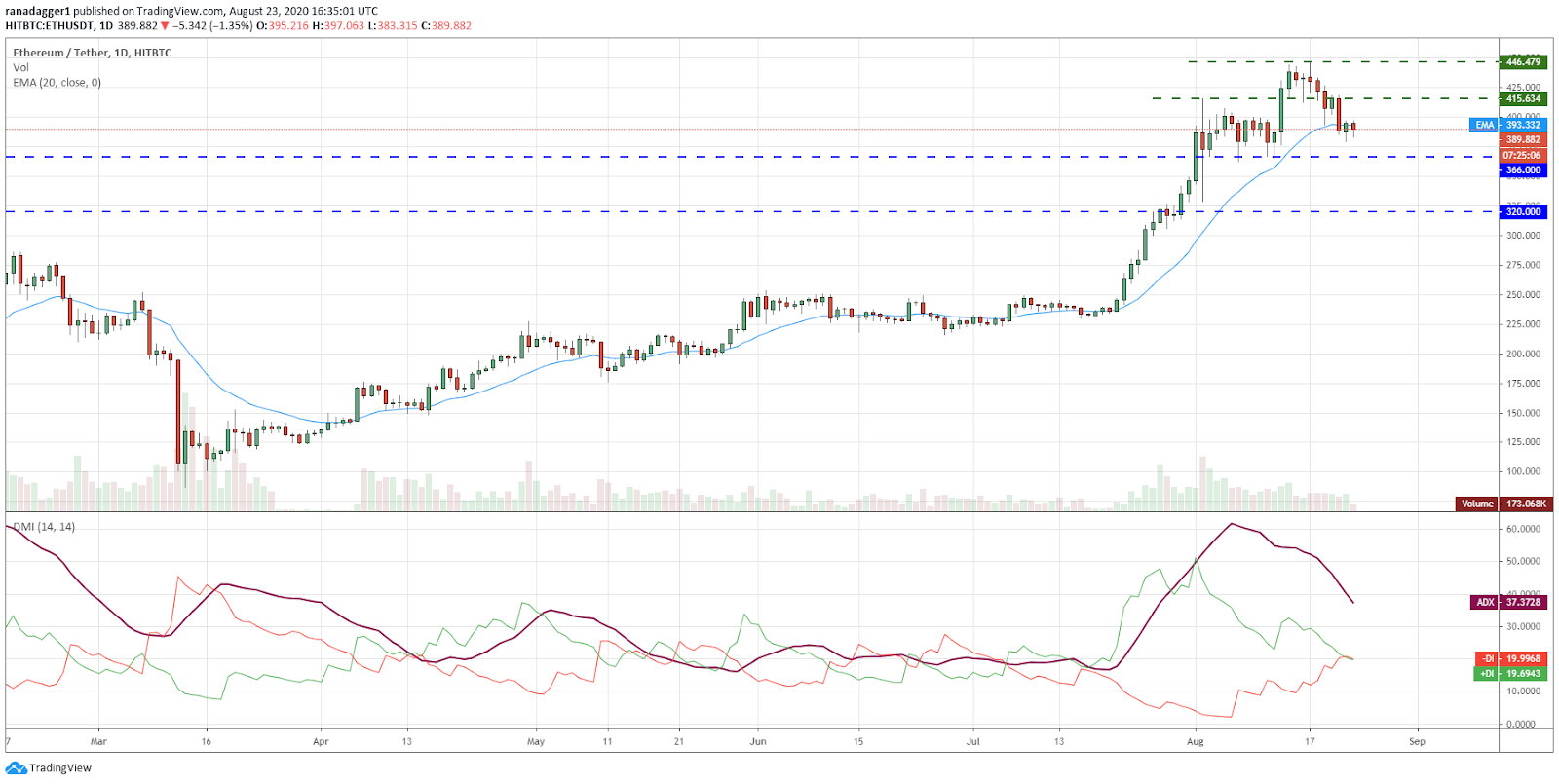 The next support on the downside is $366. If the price rebounds off this level, it will suggest that the bulls are defending this support. The 20-day EMA has flattened out and the +DI and -DI are close to one another, which suggests a balance between supply and demand.

This points to a possible range-bound action between $366–$446.479 for a few days. A breakout above the range is likely to resume the uptrend while a break below it can result in a decline to the next support at $320. 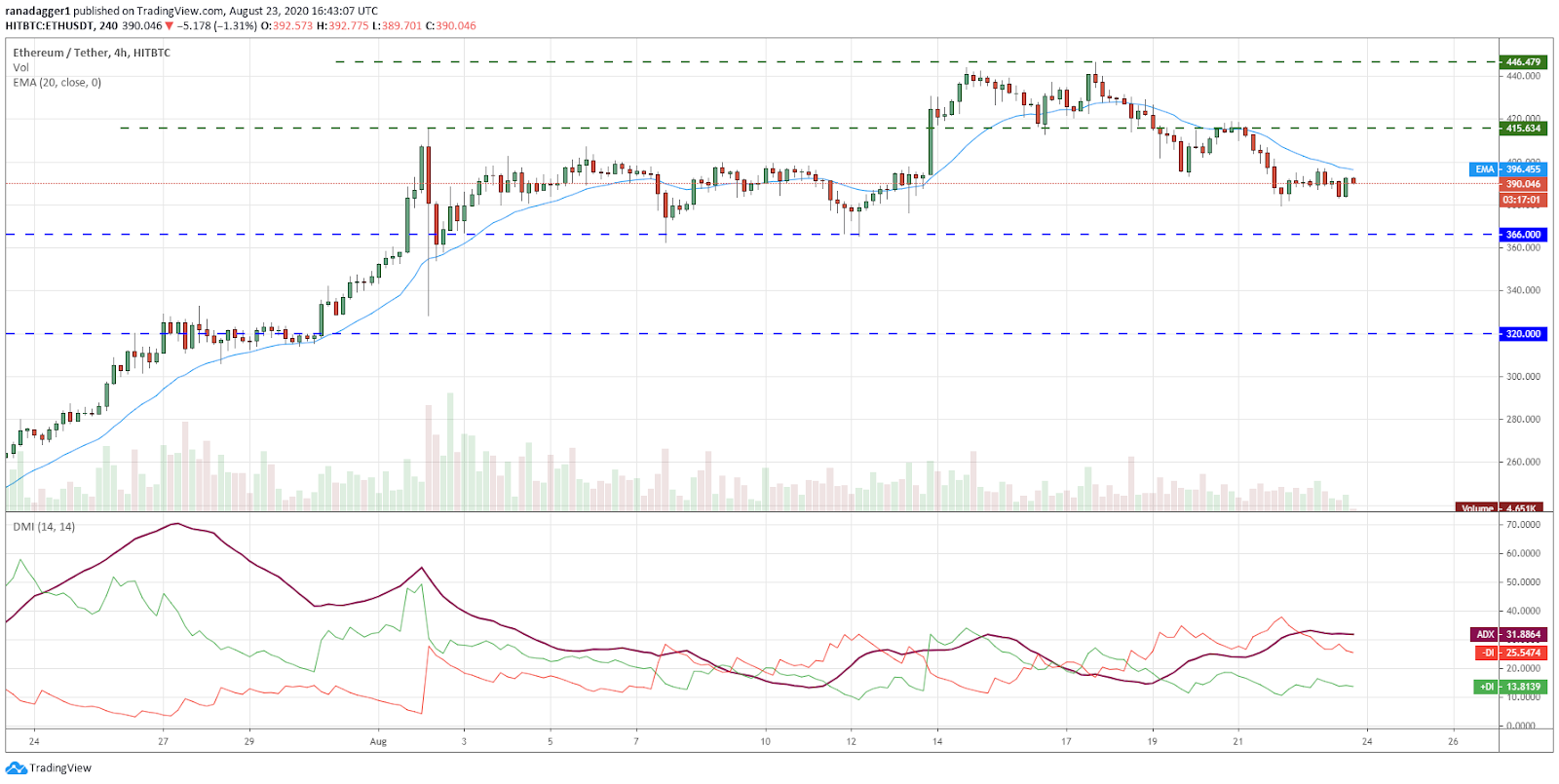 The 4-hour chart shows that the -DI is above the +DI and the 20-EMA is sloping down, suggesting an advantage to the bears in the short-term. Previously, the $366 support had acted as a strong support, hence, the bulls will again attempt to defend this level.

A strong bounce off it could result in a rally to $415.634. If the price turns down from this resistance, then a few days of range-bound action is possible.

Conversely, if the $366 support breaks, it will be a huge negative that could result in a decline to $320.

Cosmos (ATOM) has broken above the $7.249 resistance today, which is a huge positive as this suggests a possible resumption of the uptrend. The ADX is above 30 and the +DI is above the -DI, which suggests that the bulls have the upper hand. 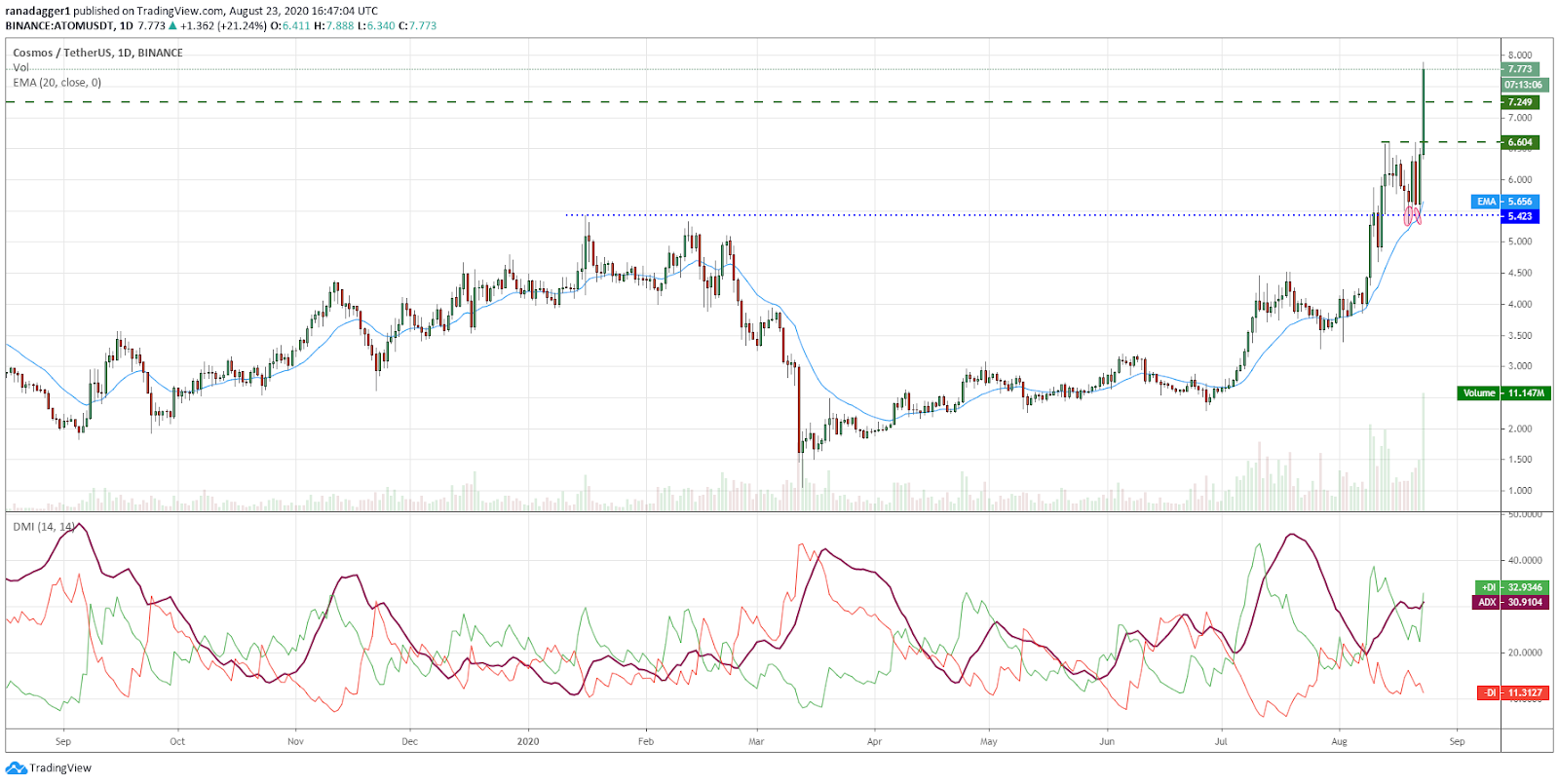 However, if the bears sell at higher levels and pull the price back below $7.249, a drop to $6.604 is possible. If the ATOM/USD pair rebounds off this support, the bulls will again attempt to resume the uptrend.

Conversely, if the bears sink and sustain the price below $6.604, it will suggest that the momentum has weakened. Below this support, a drop to $5.423 is likely. 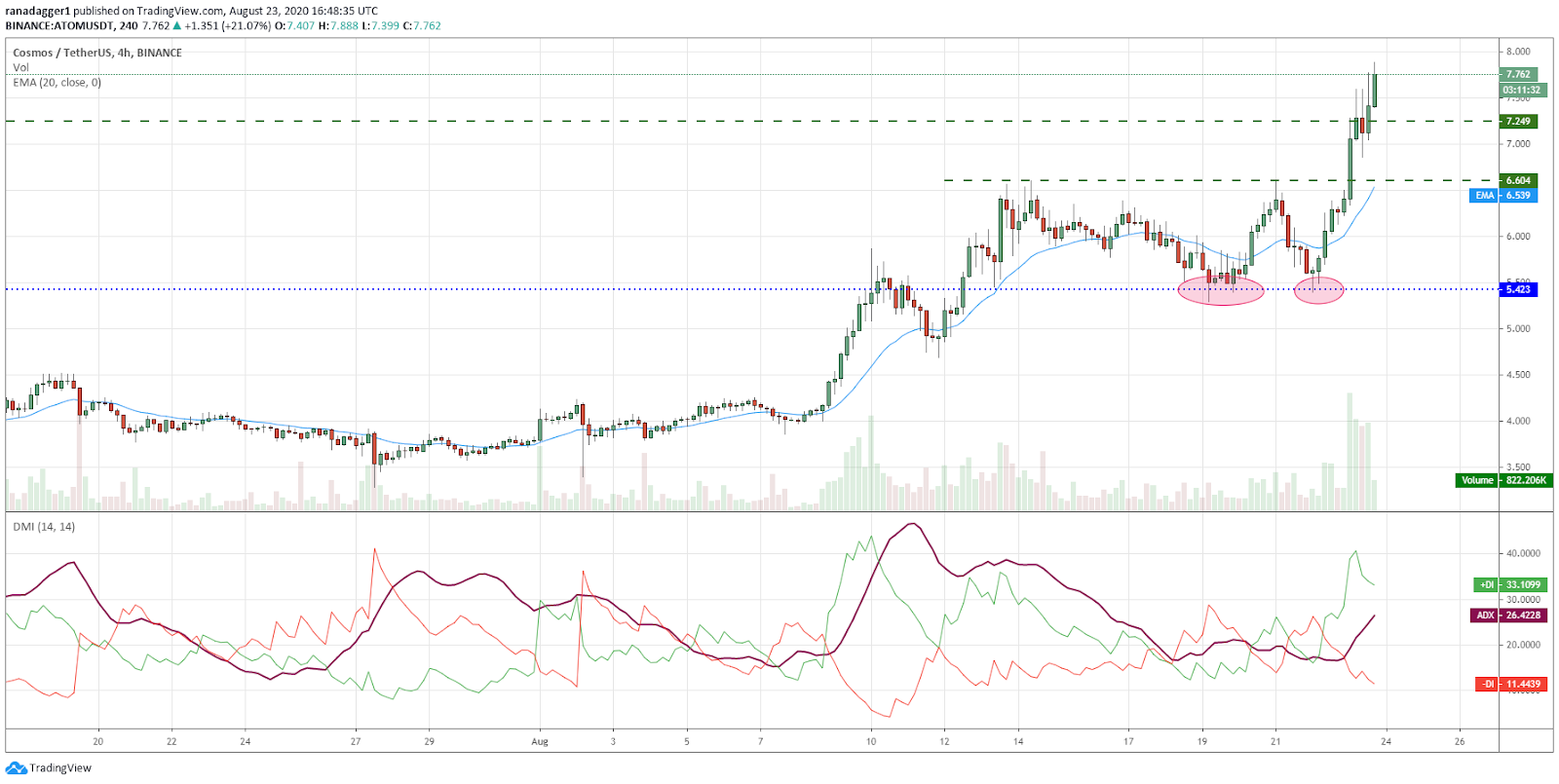 The 4-hour chart shows that the bullish momentum picked up after the buyers pushed the price above the $6.604 resistance. Although the bears attempted to stall the up move at $7.249, strong buying by the bulls soaked up all the selling.

The 20-EMA is sloping up and the +DI has risen above the -DI, which shows that the path of least resistance is to the upside. A break below $7.249 will be the first sign that the bullish momentum has weakened. 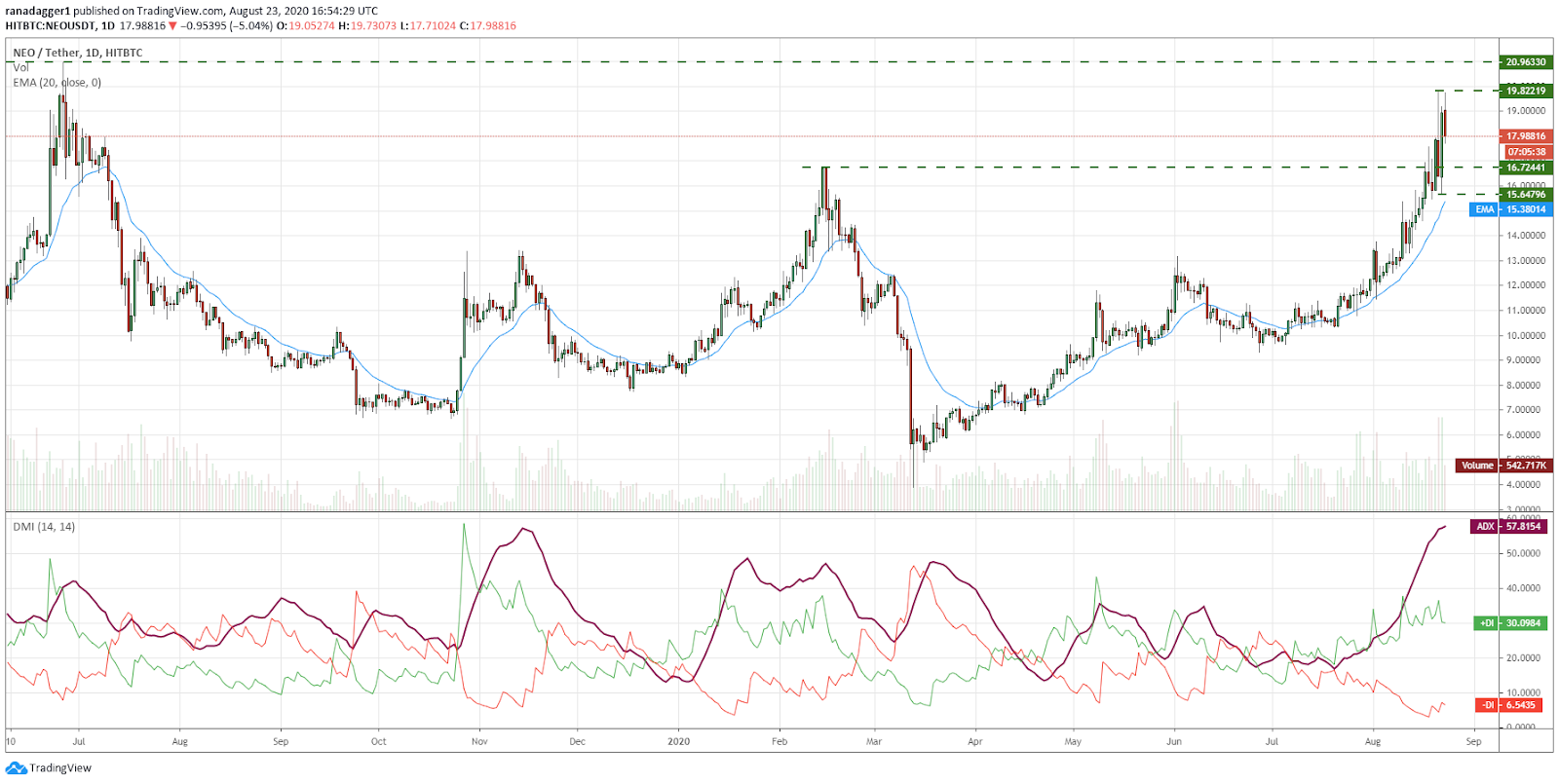 This could result in a minor correction or consolidation that is likely to find support at $16.72441 and below it at the 20-day EMA.

If the NEO/USD pair rebounds off either support, the bulls will once again attempt to push the price above $20.9633. If they succeed, the next target on the upside is $25.23.

This bullish view will be invalidated if the bears sink the price below the 20-day EMA. Such a move will suggest that the momentum has weakened. 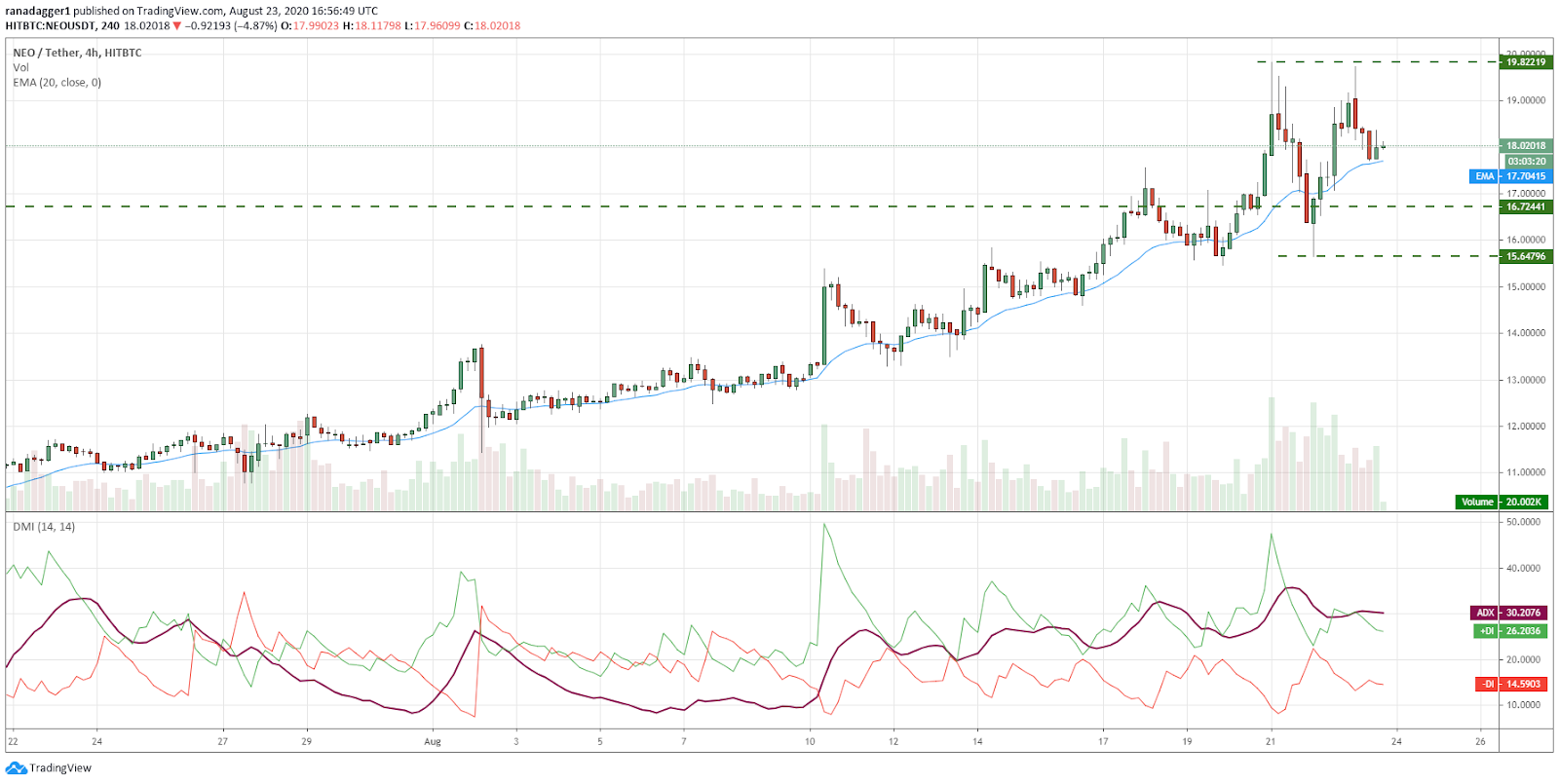 The 4-hour chart shows that the bears are aggressively defending the overhead resistance at $19.82219. Currently, the 20-EMA is sloping up, which suggests that the advantage is with the bulls.

If the price rebounds off this level, the bulls will make another attempt to push the price above the resistance. If they succeed, the uptrend is likely to resume.

Conversely, a break below the 20-EMA will weaken the bullish momentum and could result in a drop to $15.64796–$16.72441 support zone. A bounce off this zone could keep the pair range-bound for a few days.

Crypto.com Coin (CRO) has been range-bound between $0.15306–$0.176596 for the past few days. In an uptrend, when the price consolidates near the overhead resistance, it is a positive sign because it suggests that the bulls are not closing their positions in a hurry. 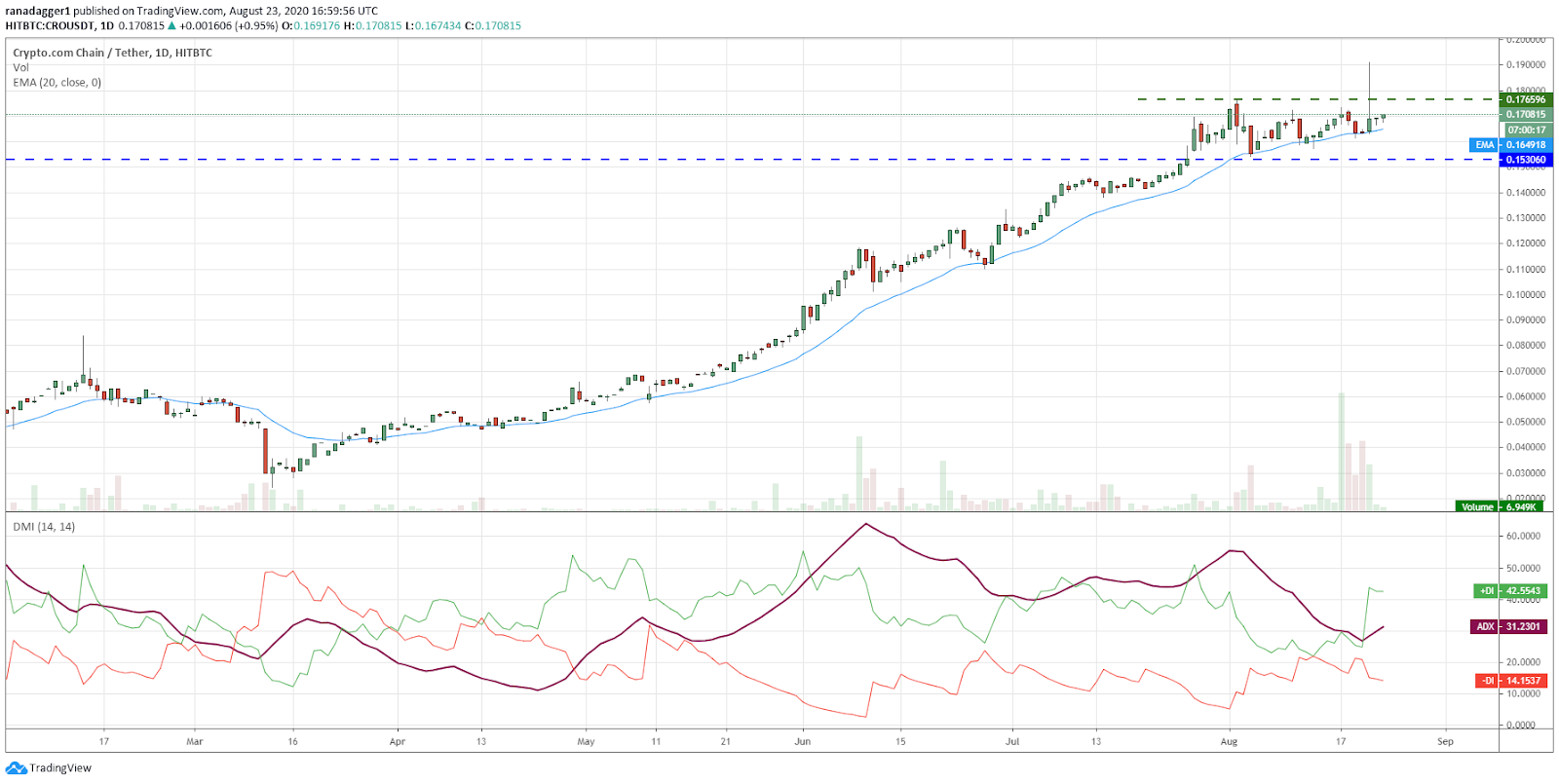 The ADX is above 31 and the +DI is above the -DI, which suggests that the advantage is with the bulls. Although the bulls had pushed the price above $0.176596 on Aug. 21, they could not sustain the higher levels.

However, the positive thing is that the buyers have not allowed the price to sustain below the 20-day EMA ($0.164). If the bulls can again propel the price above $0.176596, the uptrend is likely to resume. 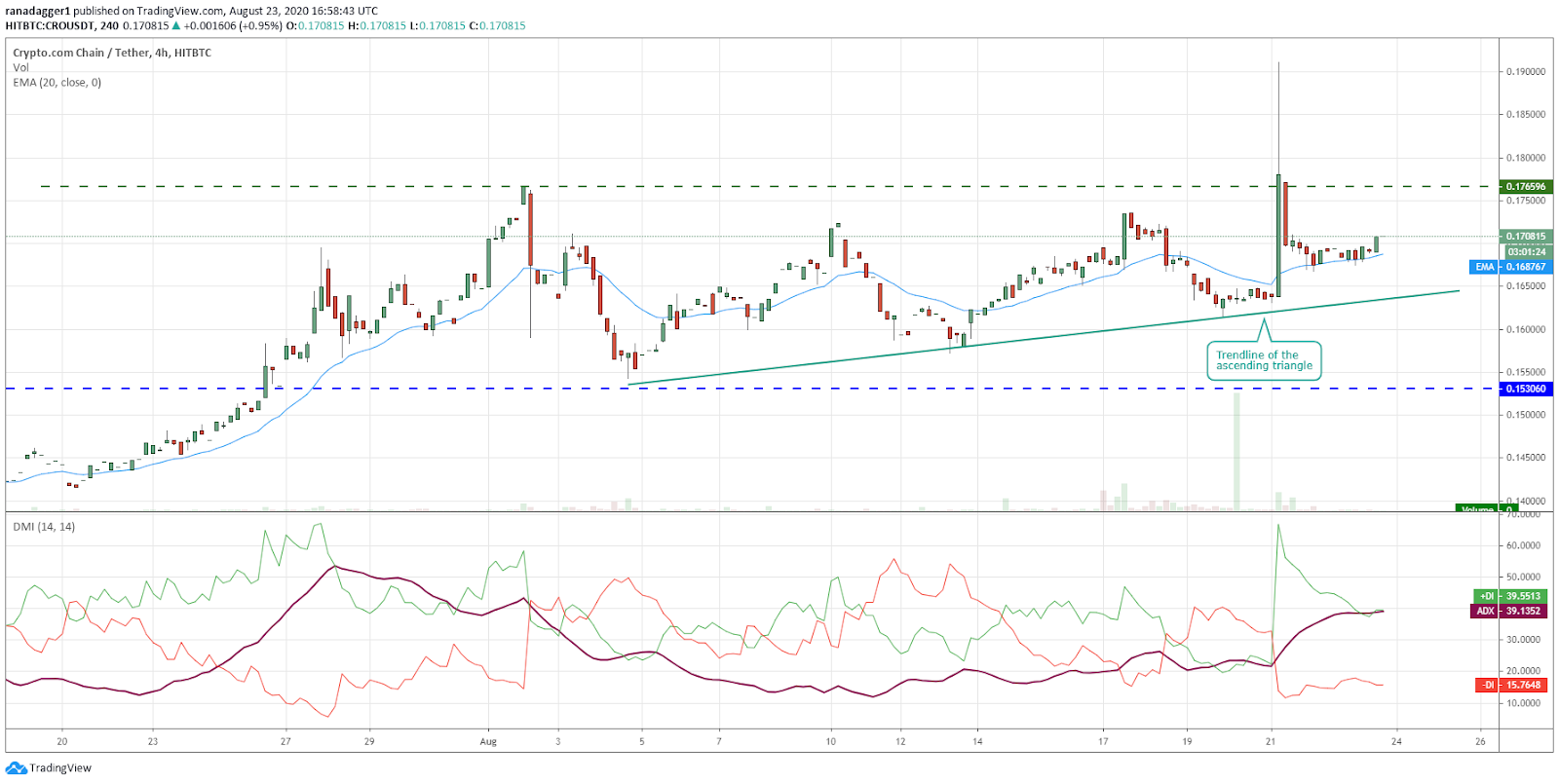 The 20-EMA on the 4-hour chart is flattish, which suggests a balance between the bulls and the bears.

However, the pair has formed a series of higher lows, which has resulted in an ascending triangle pattern, which will complete on a breakout and close (UTC time) above $0.176596.

The first sign of weakness will be a break below the trendline. Such a move can drag the price down to the critical support at $0.15306. A break below this level will shift the advantage in favor of the bears.