Leading crypto traders lay out both bearish and bullish scenarios for Bitcoin as the halving approaches.

The price of Bitcoin (BTC) increased from $7,700 to $9,500 in merely 48 hours from Wednesday to Thursday, rising by more than 22%. The market has cooled down since, with the dominant cryptocurrency dropping back below $9,000.

All key data points — such as spot market data, futures volume and institutional demand — suggest that the rally from the $3,000s to the $8,000s was purely organic. It was driven by actual demand from retail investors, and possibly whales, leading up to the Bitcoin block reward halving.

Whether the rapid upsurge from $8,000 to $9,500 was organic or caused by spoof orders in the futures market is unclear. According to Skew, futures volume largely increased when Bitcoin went from $8,000 to $9,500, while it remained relatively low throughout April. Skew said:

“Futures volumes were up significantly the last two days on the rapid break through $8k and $9k, mirroring what occurred on the 12th of March. Nearly $40bln were crossed yesterday.” 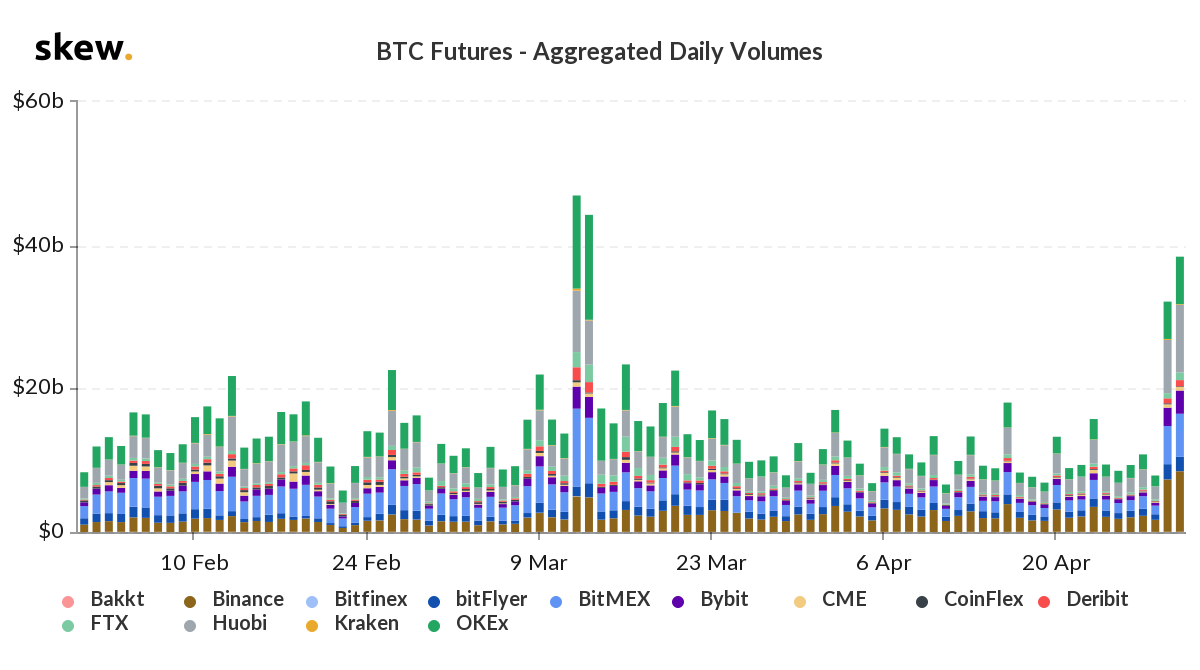 Market data indicates that less than two weeks before the halving, the structure of the cryptocurrency market has shifted from being driven by futures exchanges to spot trading platforms. The healthy transition from over-leveraged trades to organic spot trades can build a strong foundation for the next Bitcoin rally.

The Bitcoin rewards halving is set to occur in about ten days, and it will have a significant impact on the Bitcoin mining industry. It will immediately drop the amount of Bitcoin that producers can mine by verifying blocks of transactions, decreasing the rate in which new Bitcoin is introduced to the market. The halving mechanism compliments the trend of Bitcoin as it approaches its fixed supply of 21 million. As only 21 million Bitcoin can ever exist, the halving decreases the pace of its production.

Speaking to Cointelegraph, cryptocurrency trader Eric Thies explained that the technicals around Bitcoin approaching the halving on May 12 are highly promising. He said:

“In two previous halving's, BTC showed strength by surging to within 40% of the then ATH levels. In each of these prior events, BTC carried on upwards for over a year, and then a year and a half, reaching ATH's along the way. As of right now, BTC looks to be starting the current track as the previous halving events.”

The medium-term trend of Bitcoin is optimistic, but Thies emphasized that retests of lower support levels and pullbacks are unavoidable in the short-term. “These items aside, note that the recent 25% gains will not come without retests and pullbacks to former resistances, in efforts to consolidate the bullish momentum building,” he added.

For Bitcoin to remain in a bullish trend in the aftermath of its halving, it would have to defend the $7,100 support level and avoid a downturn to the mid-$6,000 area. If it can remain above the $7,100 level with strength, Thies believes that $10,600 is a viable target in May. He noted:

“Assuming support holds after an initial retests of our recent gains, AND if bulls hold the current momentum they’ve built, we should see $10.6k by May, and continuation to test the current ATH in the months thereafter.”

The bullish scenario for Bitcoin in the short- to medium-term, as explained by Thies, is quite simple. Technical indicators such as the moving average convergence/divergence, or the MACD, at high time frames — including weekly — signals the start of a new upside movement. A cryptocurrency trader known as RookieXBT said:

“Not a fan of using indicators but had this pointed out to me. MACD on the weekly crossing bullish again. Interesting times going into the halving.”

The relative strength index, or RSI, of Bitcoin is hovering in the 80%–90% range. A reading of more than 75% suggests highly overbought conditions for an asset. But given that the RSI can remain oversold for an extended period of time during a proper recovery, if Bitcoin can avoid a significant pullback to the $4,000–$5,000 range, the probability of a continuation of a bullish trend remains high. Thies also stated:

“While these resistances [$9,200, $10,400 and $11,400] will not be easy to break through, this setup on the macro side of things is impressive and continues to grow with each resistance Bitcoin reclaims. Consolidation will happen and things will need to slow so the market stays somewhat in control. For this, the bulls must maintain approx. $7.1k, which is where several timeframes indicate strong support will be most prominent.”

More traders lean toward a bearish scenario for Bitcoin

Following Bitcoin’s rejection of $9,500 and its reentry to the mid-$8,000 region, more traders are considering the likelihood of Bitcoin seeing a local top rather than a bullish continuation above $10,000. Cryptocurrency trader Michael van de Poppe said that while $4,000 and $5,000 is not likely to be seen again, a healthy retrace to the mid-$6,000 area is reasonable. He said:

“I don't think it's likely to see $4,000–5,000 levels again, especially after the halving. However, a healthy retrace seems reasonable, which is likely due to occur after the halving. Potential targets for these areas are a test of 200-Week MA around $6,500–7,000.”

Mohit Sorout, a founding partner at Bitazu Capital, also described $9,500 as a “logical place for $BTC to take a breather,” suggesting that the intense rally of Bitcoin could lose steam in the short-term. 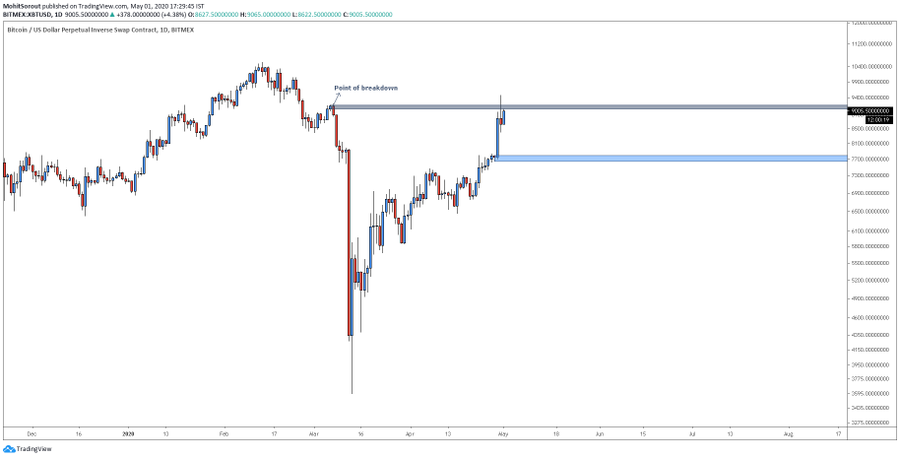 Another trader known as Big Chonis Trading pointed out that the strong upsurge of Bitcoin since late April led to the formation of a “TD9” on the daily chart of Bitcoin. TD9 is a sell signal in the TD Sequential system that sparks when an asset sees an overextended rally and is due for a correction. “The #bitcoin halving is in 11 days... Plenty of time for one more FOMO pump...? Hard to ignore though how yesterday’s candle closed, today opening on a TD9,” the trader wrote in a Tweet.

Zoran Kole, a cryptocurrency technical analyst, stated that the $7,700–$8,000 range is the next rational area of support for Bitcoin. He noted that in the entire run up to $9,500, bears suffered from an overextended upside movement, and bulls demonstrated euphoria, raising the probability of it being a top. Kole said:

“I personally think the local top is in. Little premature to call it but looks like an SFP of the 9.2 liquidity void. Bears blown the f--- out. Bullievers euphoric. Would want to see 84xx hold for continuation otherwise 7.7-8k is the next area of interest to long.” The negative short-term projections for Bitcoin go in line with the bearish scenario laid out by Thies, who said that a drop below $7,000 would increase the likelihood of a bear trend resumption. Thies told Cointelegraph:

The confluence of Bitcoin rejecting at a key trendline dating back to March 12, a TD9 sell signal, the rally stopping right at the point of Bitcoin breakdown in February, and the tendency of Bitcoin to see “sell-the-news” sell-offs makes a post-halving correction highly likely.

But the noticeable increase in demand for Bitcoin shown by a massive rise in spot volume and institutional interest may serve as a proper basis for a long-lasting rally. As such, despite the 163% price increase since $3,600, a continuation of a bullish trend for Bitcoin cannot be ruled out.